Taj Mahal: A Moment of Quiet and Solitude in India

India is a country of color.  Traditional clothing favors vibrant hues, especially for women.  Cherry red, fire orange, peacock blue, emerald green, and sunshine yellow collide in a chaos of scarves and saris.  Buildings tend to be grey, brown, and red because of the stone and earth available to use for construction.  Yellow and green tuk-tuks dart through the streams of modern vehicles.  Food is spiced to shades of yellow and red, and markets abound with sandy-looking mountains of colorful precious flavors like saffron and cumin.  Plants bloom in every available space, providing a backdrop of green even in the most crowded, dusty cities. 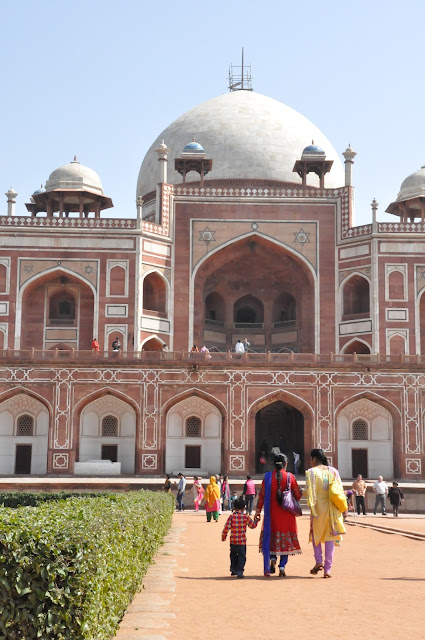 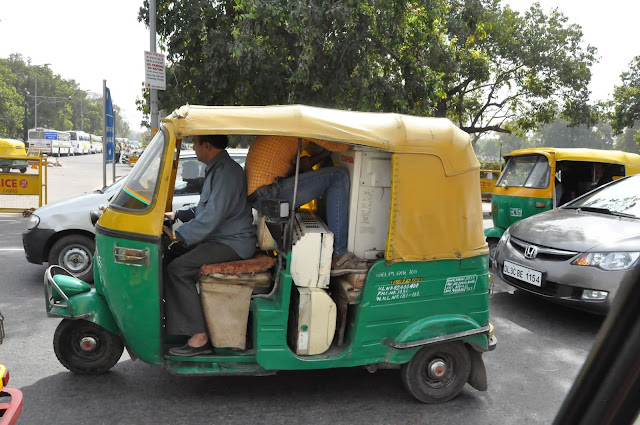 India is also dirty.  Many roads are not paved, and a smog of pollution and dust permeates much of the country.  Animals freely roam the streets, even in the most metropolitan and modern of cities.  That's just the way it is for this densely populated country, but it creates a sheen of shabby sameness over the riot of colors that is India. 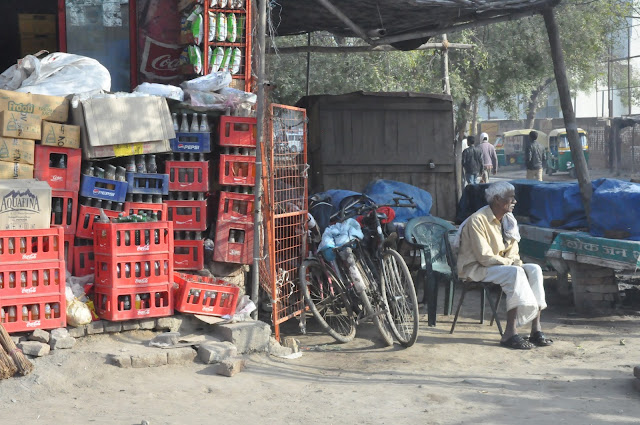 Against this backdrop of crowds, chaos, grime, and hues, the Taj Mahal is a shock to behold.
It glows with a lightness rare to India, as somehow the white marble domes and walls resist the polluting stain of the surrounding city.  It towers surreally over its accompanying red stone buildings and lush gardens and against the hazy Agra sky.  The bright reds and greens (and blue, if the sky cooperates!) highlight the surprising purity of the Taj's exterior. 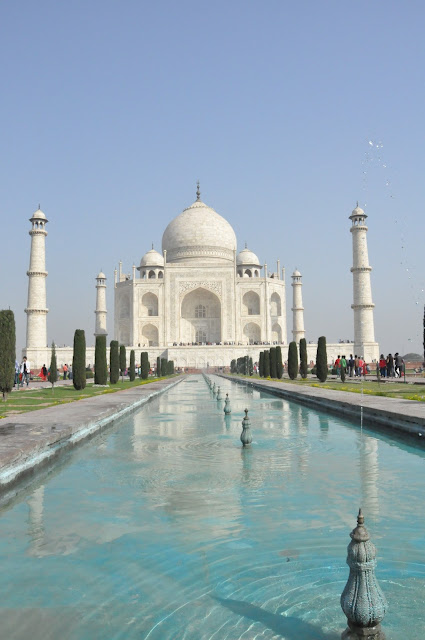 Although the Taj Mahal is a massively popular destination for both foreign and local tourists, the crowds diminish in its presence.  They dissipate through the extensive gardens, and find themselves dwarfed beneath the towering Islamic script carved into the facades of the Taj.  It regally looms over the snaking queue of visitors, quietly absorbing them into its interior and gently releasing them, dazed, onto the stone courtyard overlooking the river. 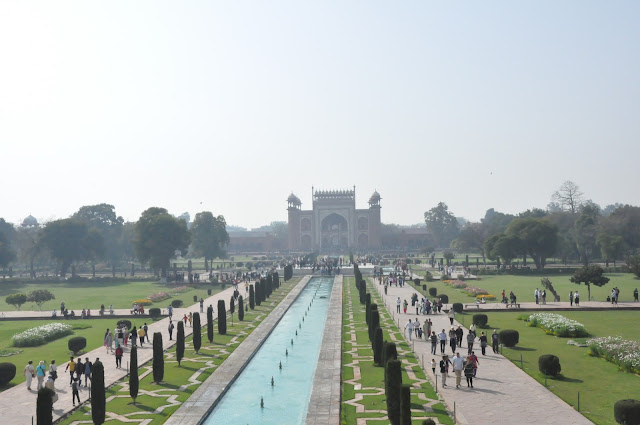 The Taj is one of those instantly recognizable landmarks that is absolutely worth a personal visit.  Endure the three-hours-one-way taxi ride from Delhi.  Force your way through the mobs of street hawkers trying to get you to ride a camel or take their special personalized guided tour of the Taj grounds.  Wait through the ridiculously long lines of visitors patiently inching forward for a metal detector screening and pat down from security. 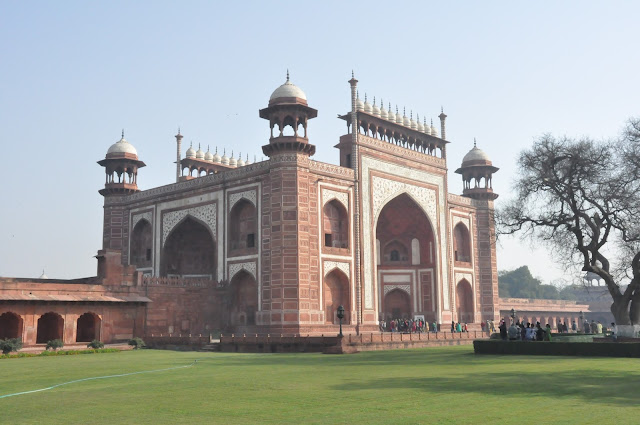 Slowly work your way into the crowd streaming towards the Great Gate, and under it's massive stone arch.  Step through the gate, and then plant your feet firmly against the stone.  Resist the ebb and flow of the humanity around you, ignore the urgent guidance of your unwanted specialized tour guide trying to set up the "perfect" photo op, and let your eyes do all the work. 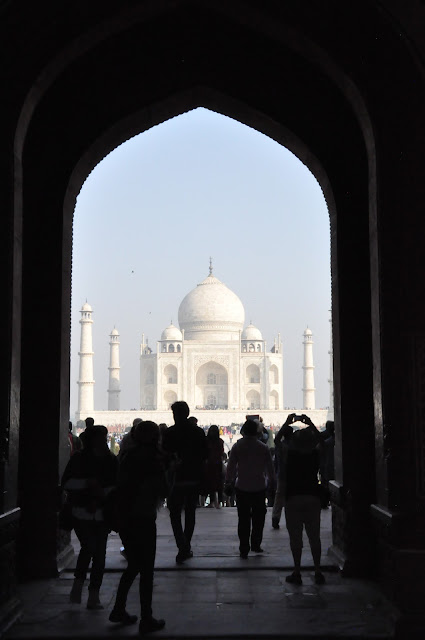 That first glimpse of the Taj Mahal is breathtaking.  It is so much more delicate, more intricate, and more astonishingly stunning than can ever be captured through the lens of a camera.  It's more than just a beautifully sculpted white marble tomb; the painstaking details of the inlaid vines and flowers disappear in photos.  The calligraphy of the Islamic script fades before the majesty of the overall effect, but comes into sharper relief with every step taken through the gardens, past the fountains, towards the steps up to the tomb's entrance. 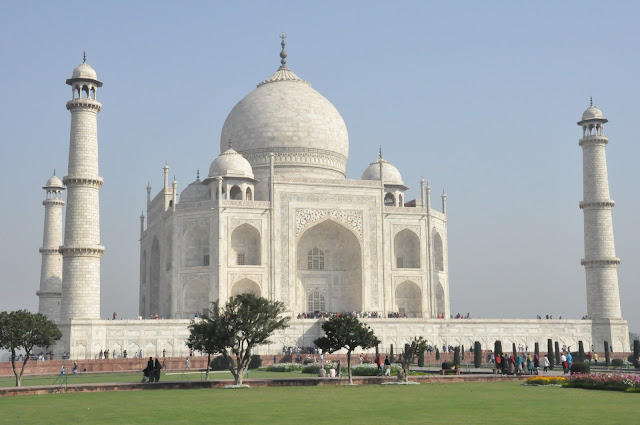 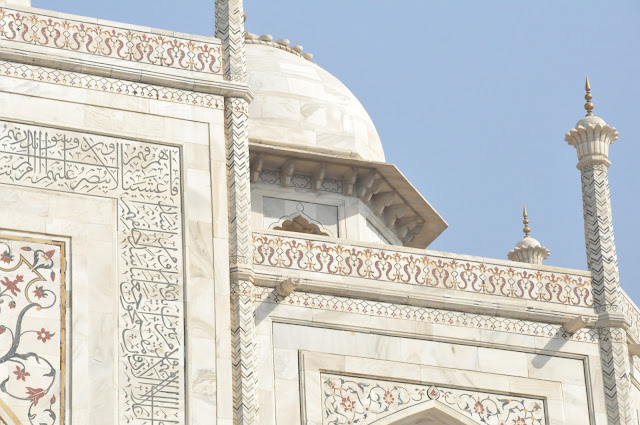 Some places have been photo-shopped into oblivion, to the point that a visit becomes a huge disappointment when the reality has no hope of living up to the recorded image.

THE TAJ IS NOT ONE OF THOSE PLACES. 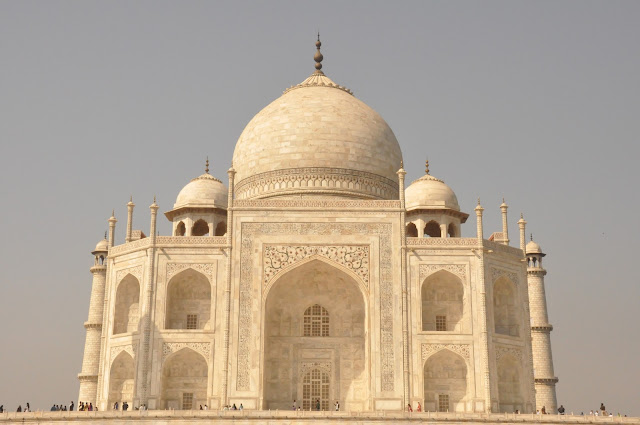 It glows from within, somehow.  It exudes calm and reverence.  The photographs are beautiful, but they simply serve as means to arouse the memory of the garden's hush and the tingle of goosebumps that danced along my arms when I stepped beneath the shadow cast down by the pearly domes. 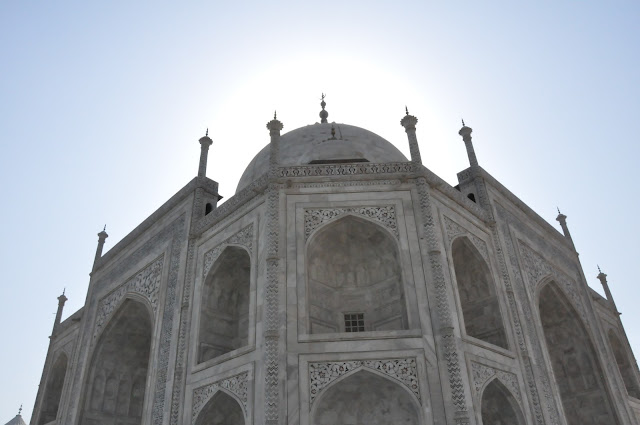