"..... where you can't swing a cat without hitting a medieval church."

I'm sitting here not writing and clicking around on Facebook instead, and I see this description used by my friend for her weekend exploring the Golden Ring around Moscow.  How appropriate!  Thanks, lady, for letting me borrow your words.  It's a perfect description of Lviv as well! 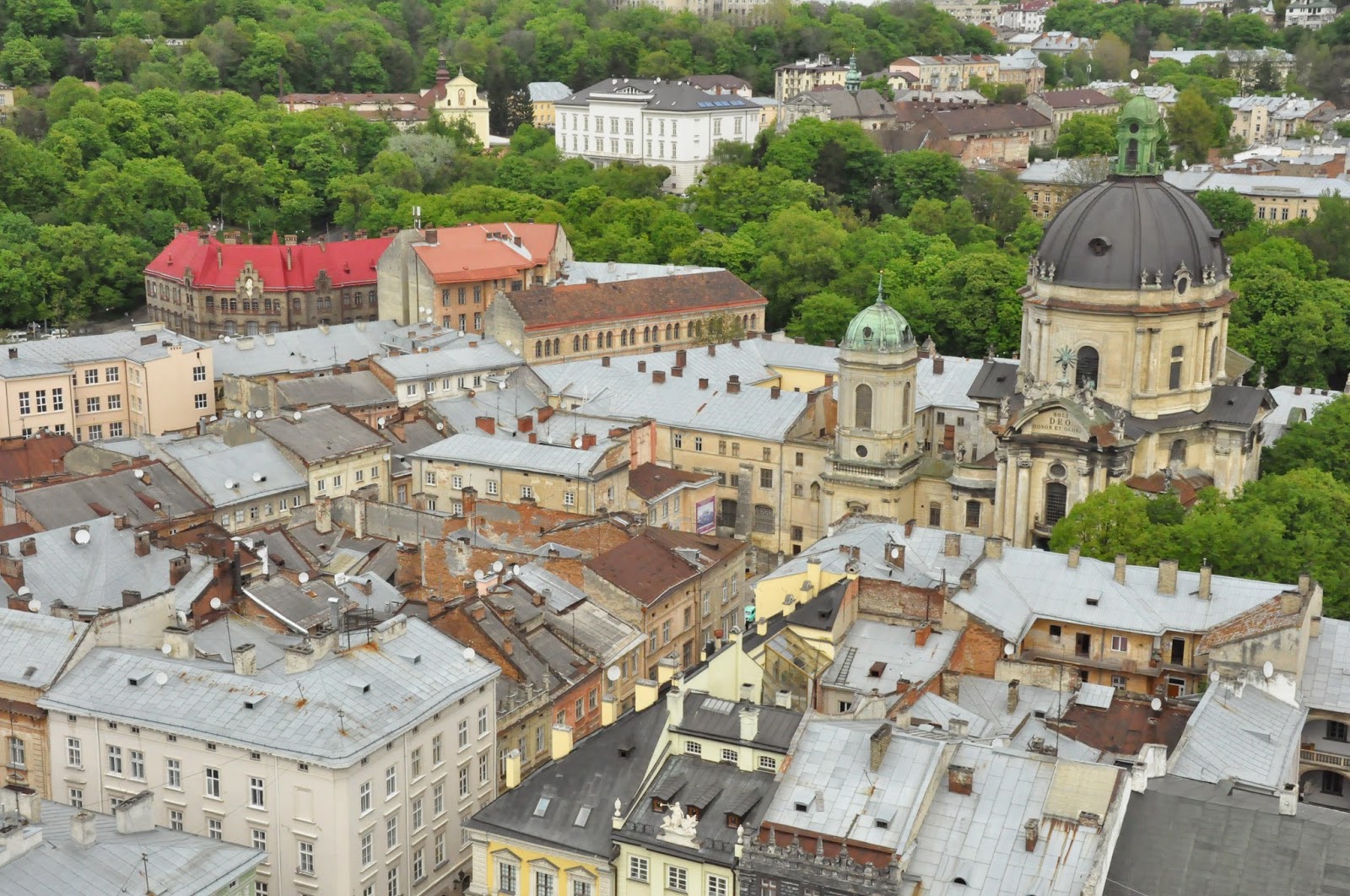 Lviv has a lot of beautiful churches, cathedrals, and chapels scattered throughout the city.  I took myself on a walking tour outlined in the 2011 Lonely Planet that I was using for the maps, but what was touted as a stroll through Lviv's historic center was really a trek to find every single religious building still standing downtown.  There is the Church of St Mary, which has some pieces dating back to the mid-1300s.  Then there's the Church of St Nicholas, which has pieces dating back to the 13th century.  Both of these churches were very plain, with drab plaster walls and no windows, but the next church was adorable.  The Church of St John the Baptist has pointed eaves edged with brick designs and a pretty garden blooming with spring flowers.  It's also a book museum now. 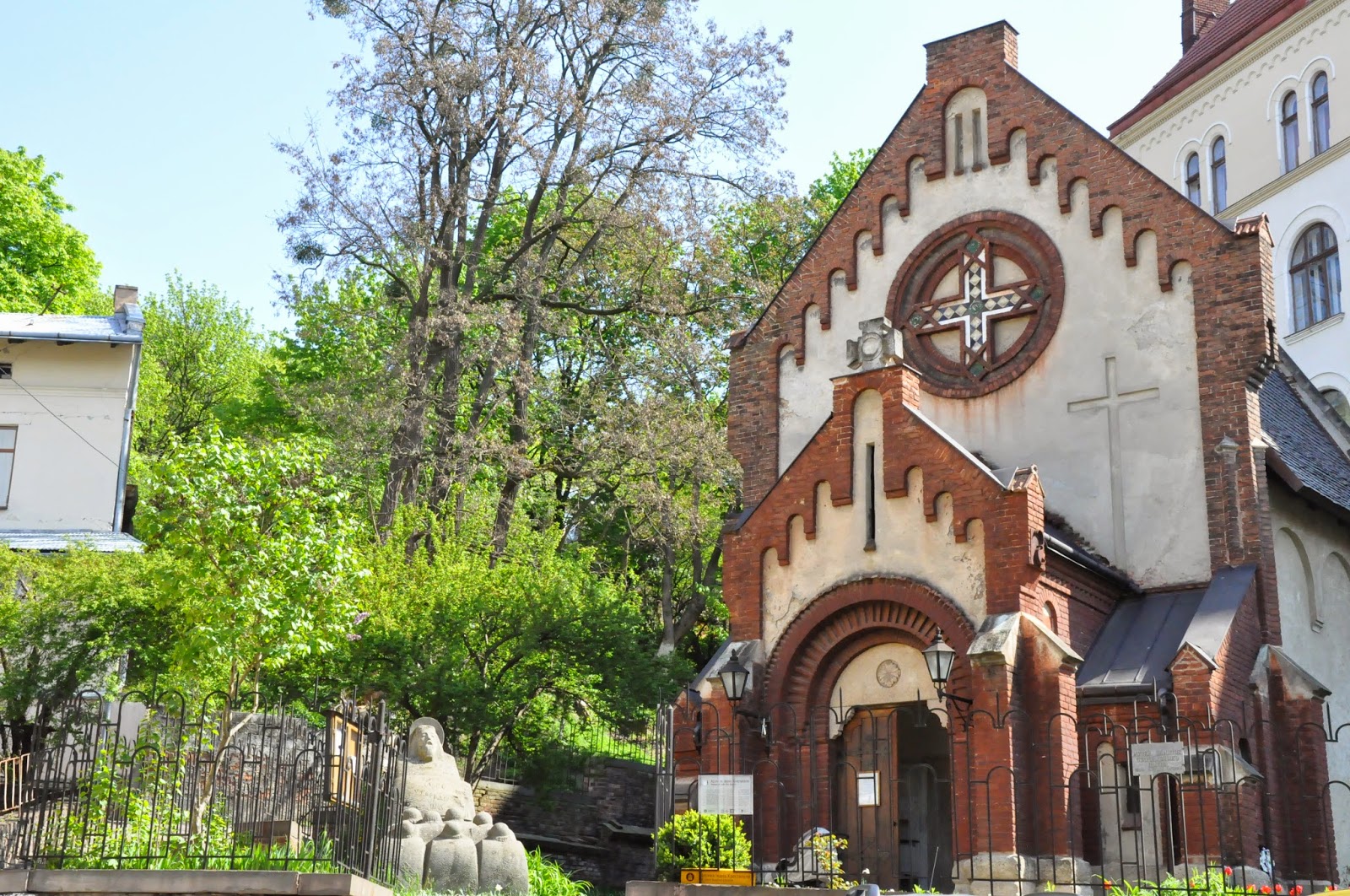 Then there's St Michael's Church, a pretty church with two spires perched on a hill overlooking the old town.  Next is the Bernadine Church and Monastery, which sits just inside the last remaining section of the city's original medieval fortification.  Onward to the Dormition Church and its adjoining bell tower, and then across the plaza to the Boyim Chapel.  This one is striking, with a blackened façade that looks like it was scorched, and unusual carvings decorating the front.  It's right next to the Latin Cathedral, which has sections that are over 700 years old.  Then there's the Jesuit Church, with a beautifully faded gold and blue interior. 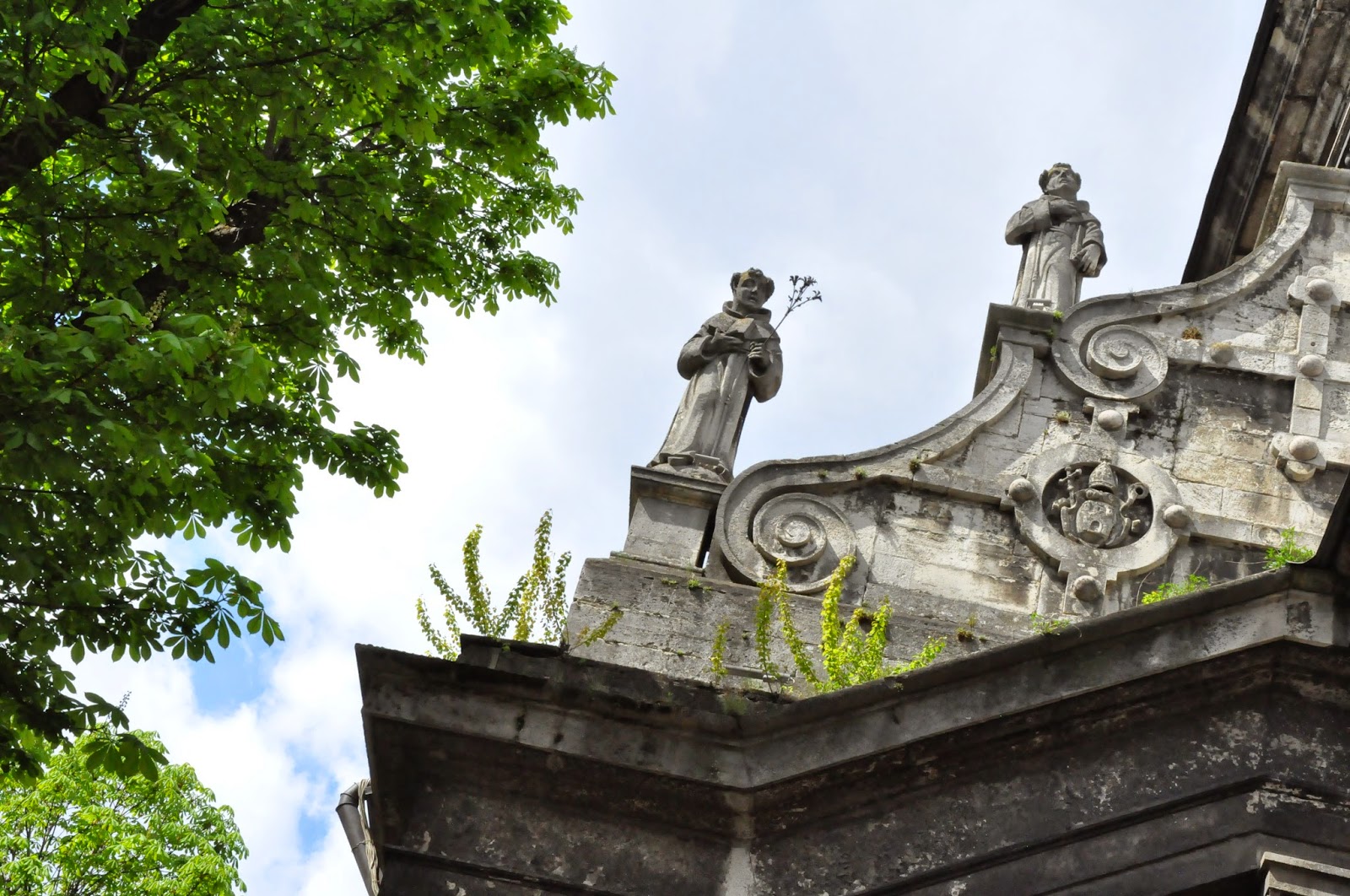 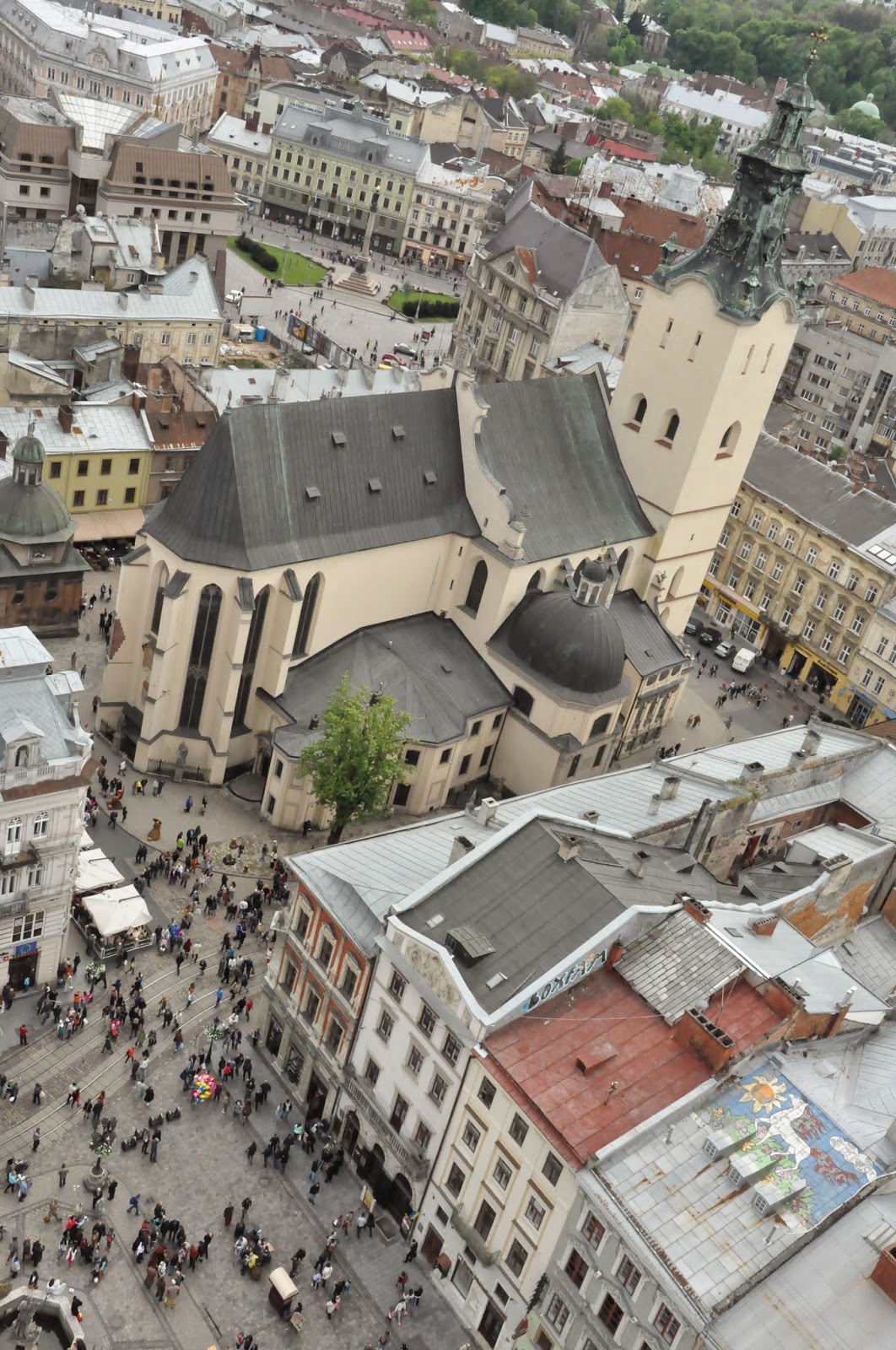 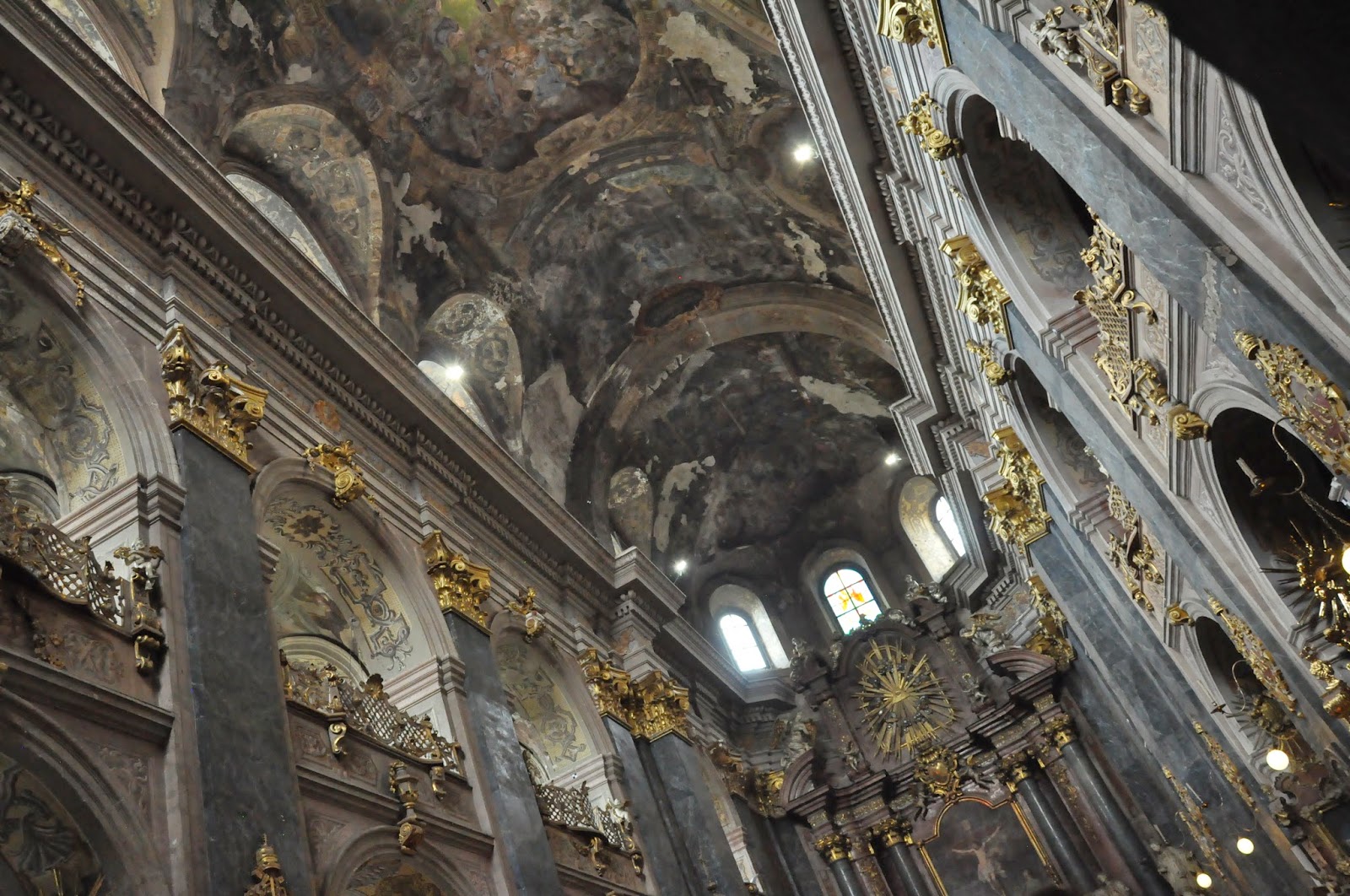 A few blocks away, I peered through the gates into the courtyard of the Armenian Church, which is supposedly quite beautiful but was blocked off to the public that day.  And then I finished up at the Dominican Cathedral, which is massive and imposing and has the neatest doors in the whole city. 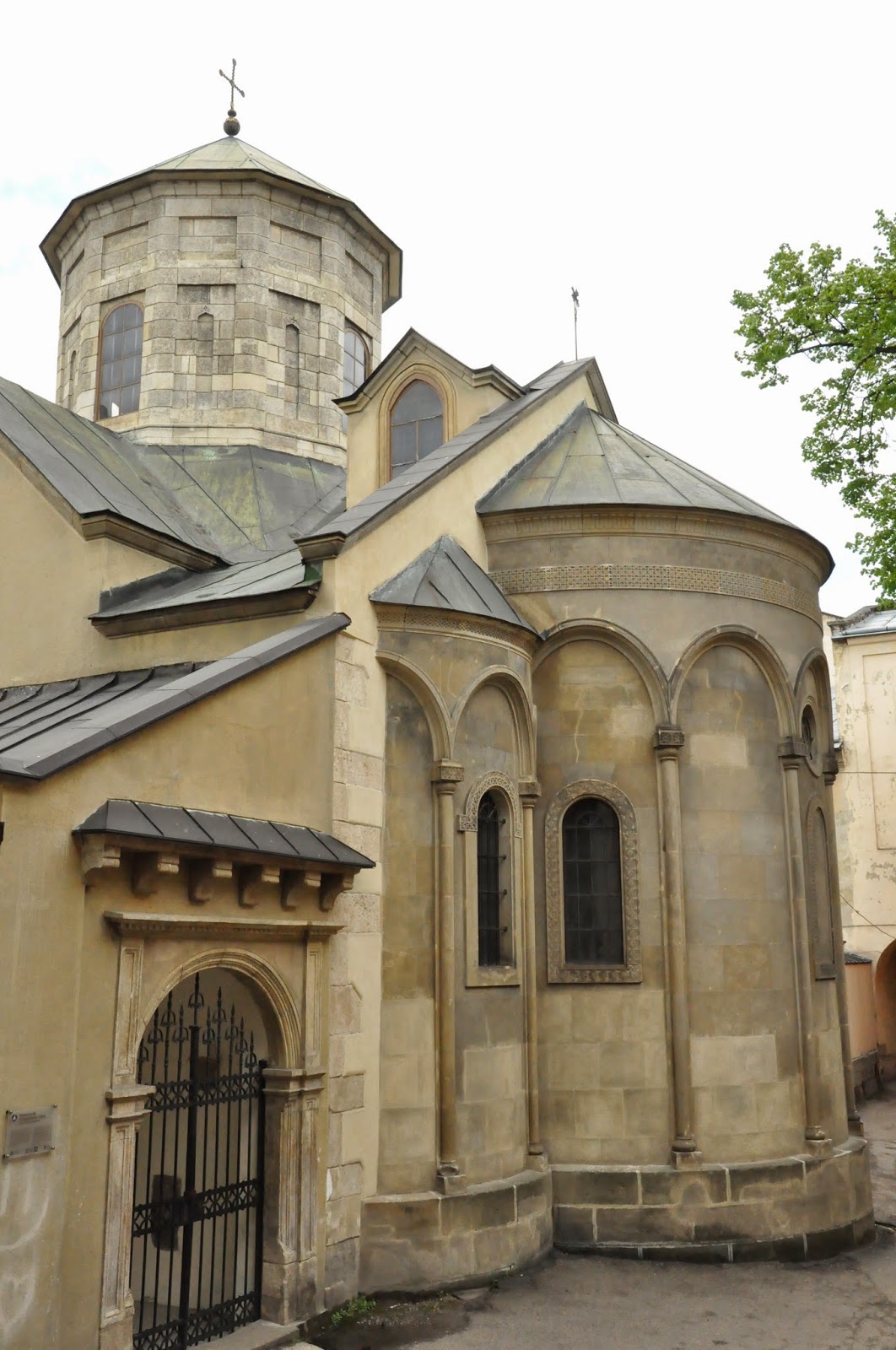 I also like the Dominican Cathedral because there's a statue behind it of a monk named Federov, who was the first printer in Ukraine.  And on weekends, a used book sale springs up around his feet! 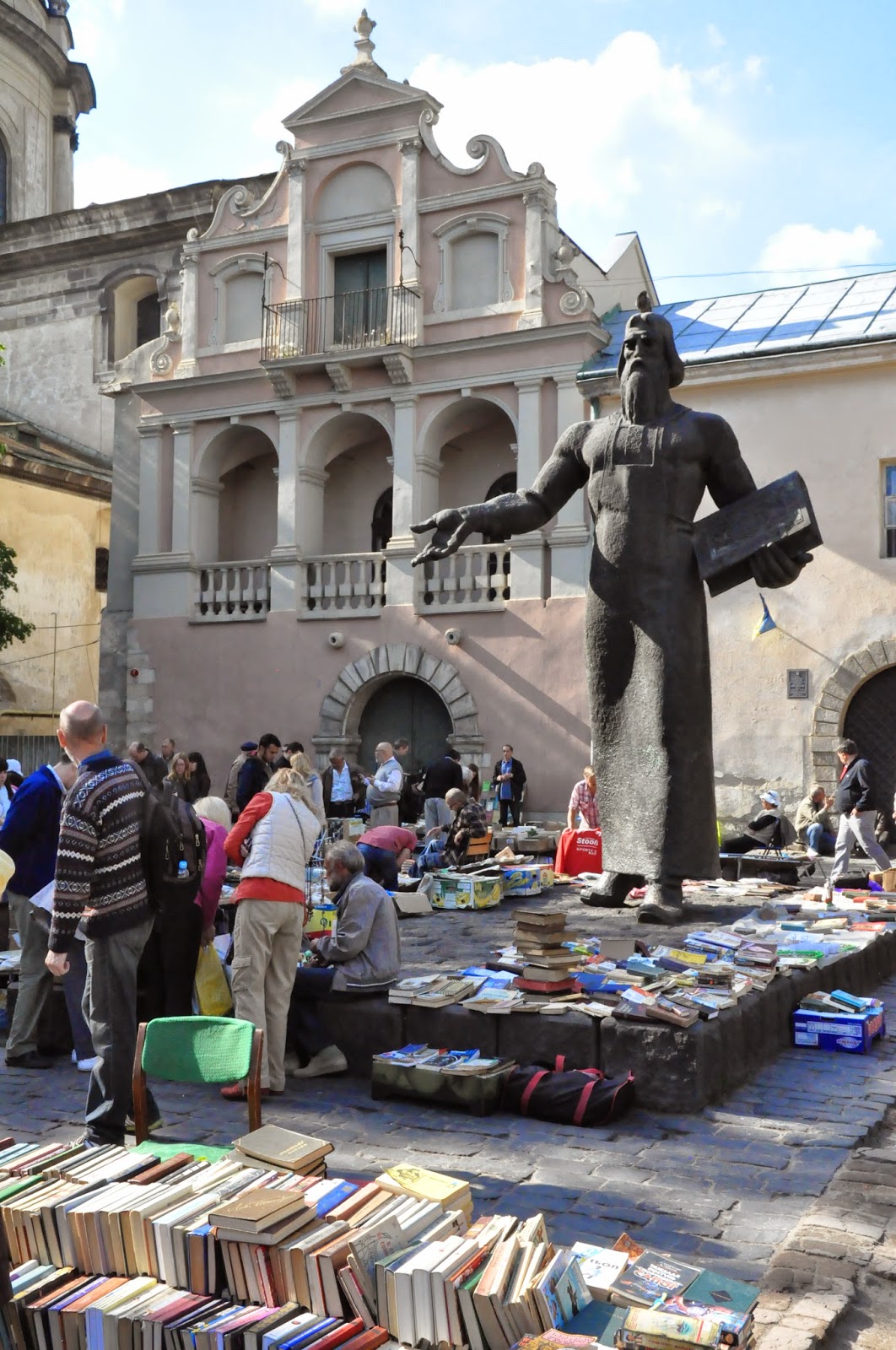 Part of Lviv's charm is the miles and miles of cobbled streets.  Most of the historic city center is cobbled, and even this does not stop Ukrainian women from walking about in precarious high heels.  I wonder if there are as many annual ankle sprains as there are individual cobbles?  They certainly help you remember to walk slowly and enjoy the scenery! 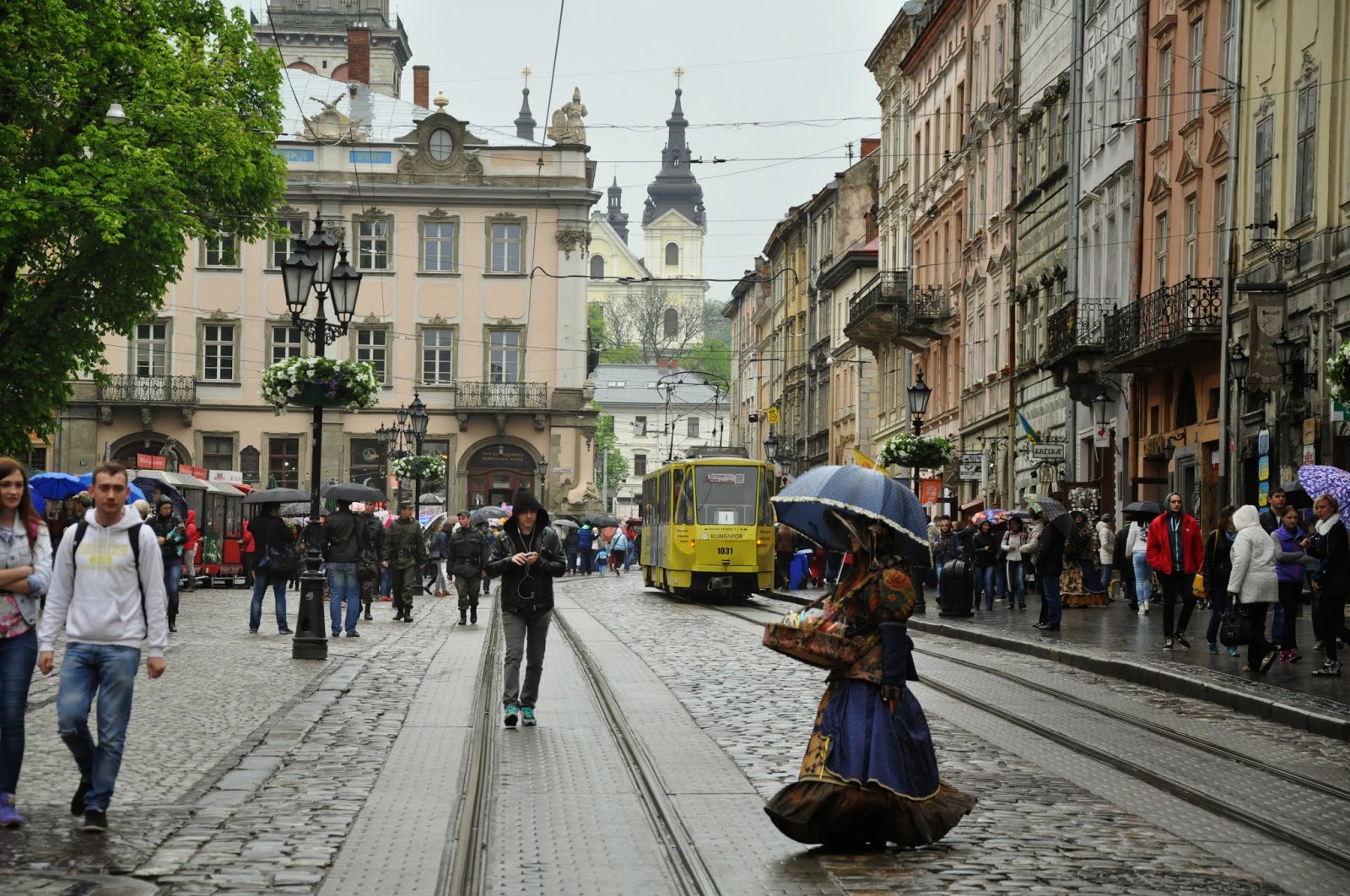 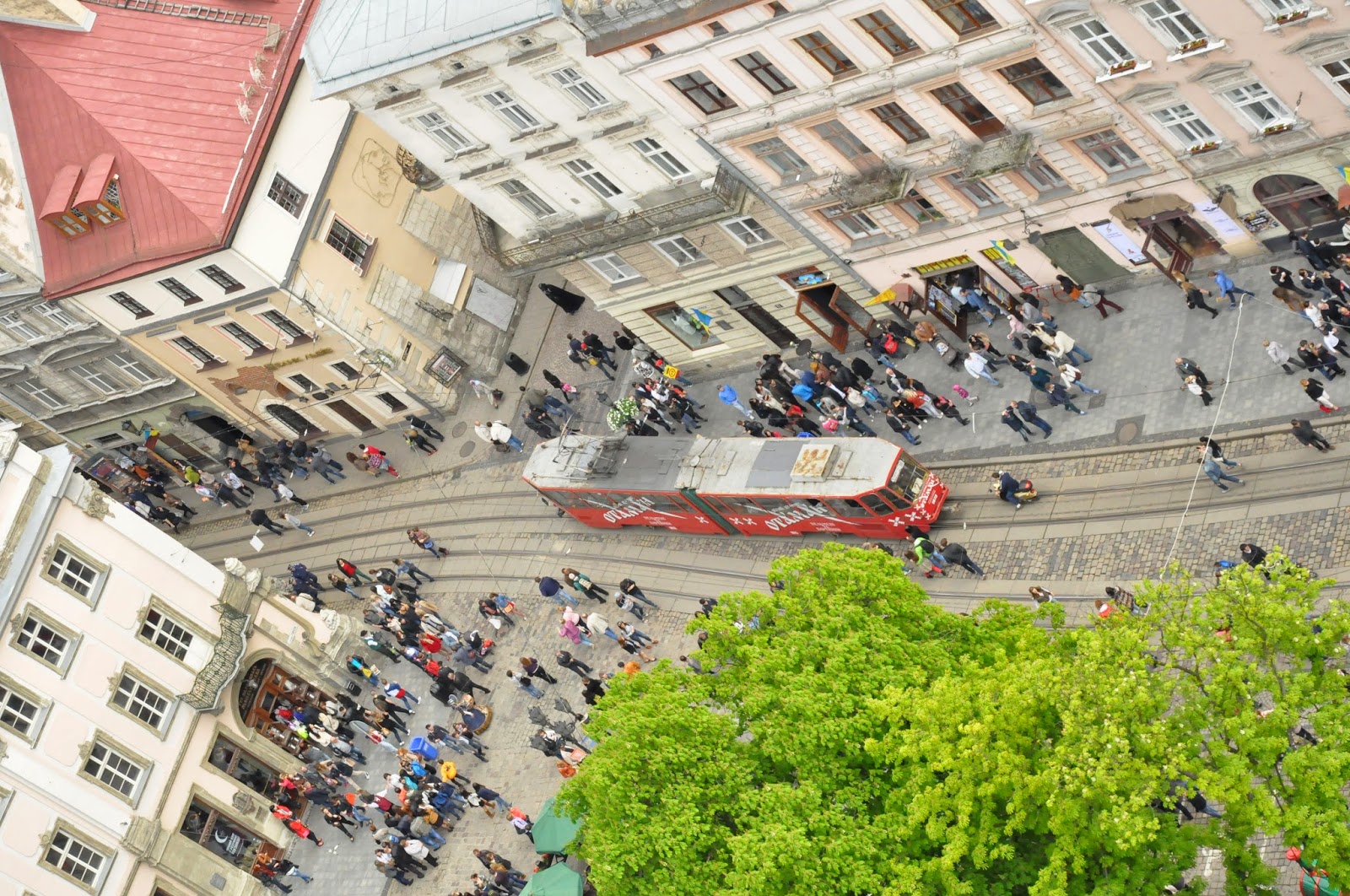 In one of Lviv's most eccentric (and awesome!) restaurants, there is an entire room dedicated to the city's cobblestones.  Different types of cobbles are displayed along one wall, and a bright red digital counter on another shows the total number of cobblestones to be found paving Lviv's streets.  According to the restaurant's menu, the counter decreases every time a cobblestone is spirited away to the dacha of a member of Parliament.

Stairs, stairs, and more stairs!  Lviv's are nothing like my Montreal memory.  Instead, they are creaky and narrow and tucked away in the bowels of Lviv's memorable historic architecture.  It starts with my Airbnb apartment, situated down a dark alley and up three flights of groaning wooden steps.  (It sounds creepy, I know, but it was actually pretty awesome.)

Then there are several flights to get down to the cave-like dining area of Robert Dom's beer house,  adjacent to Lviv's beer museum and the brewery that celebrated its 300th birthday on the first weekend in May. 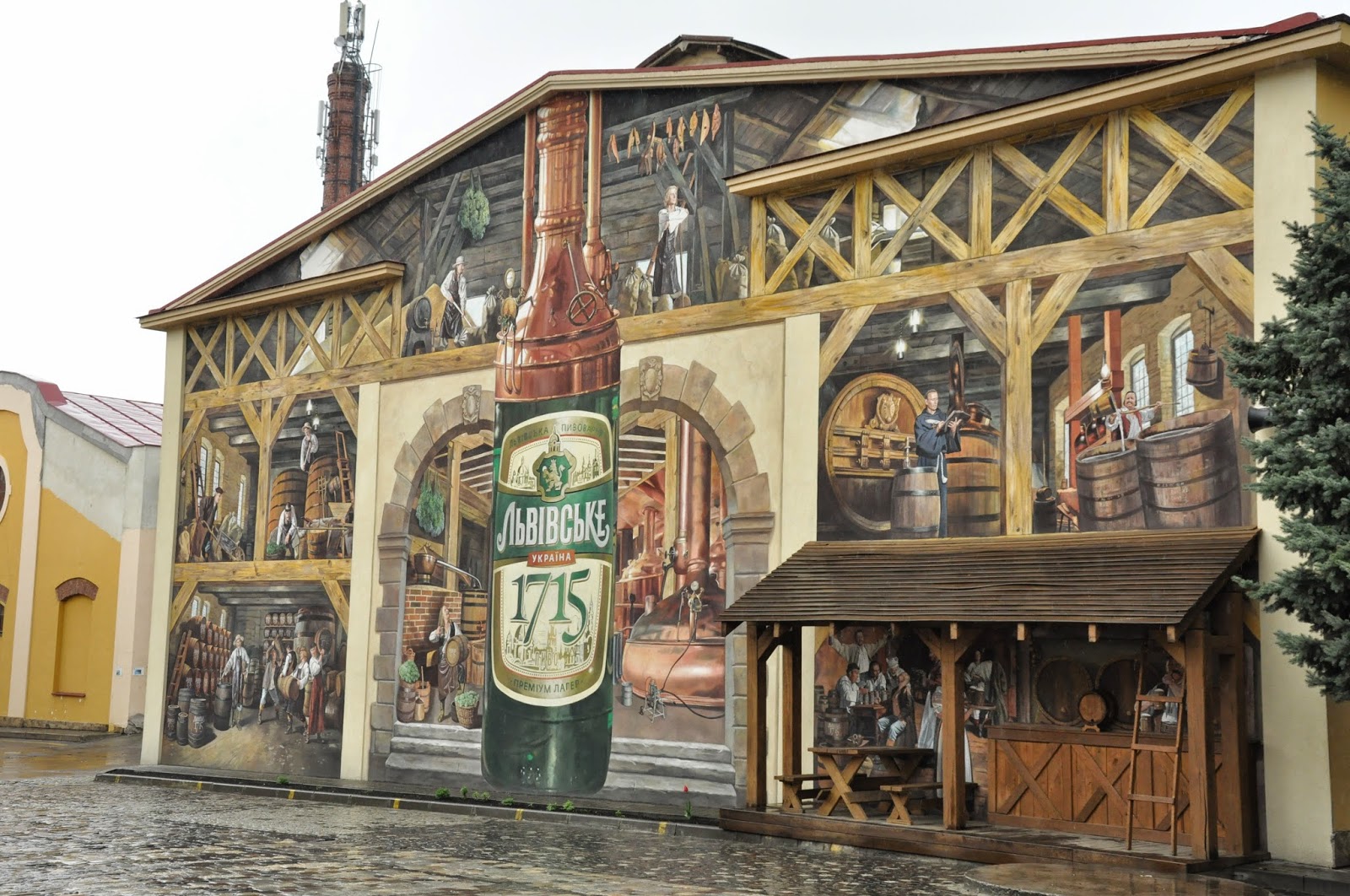 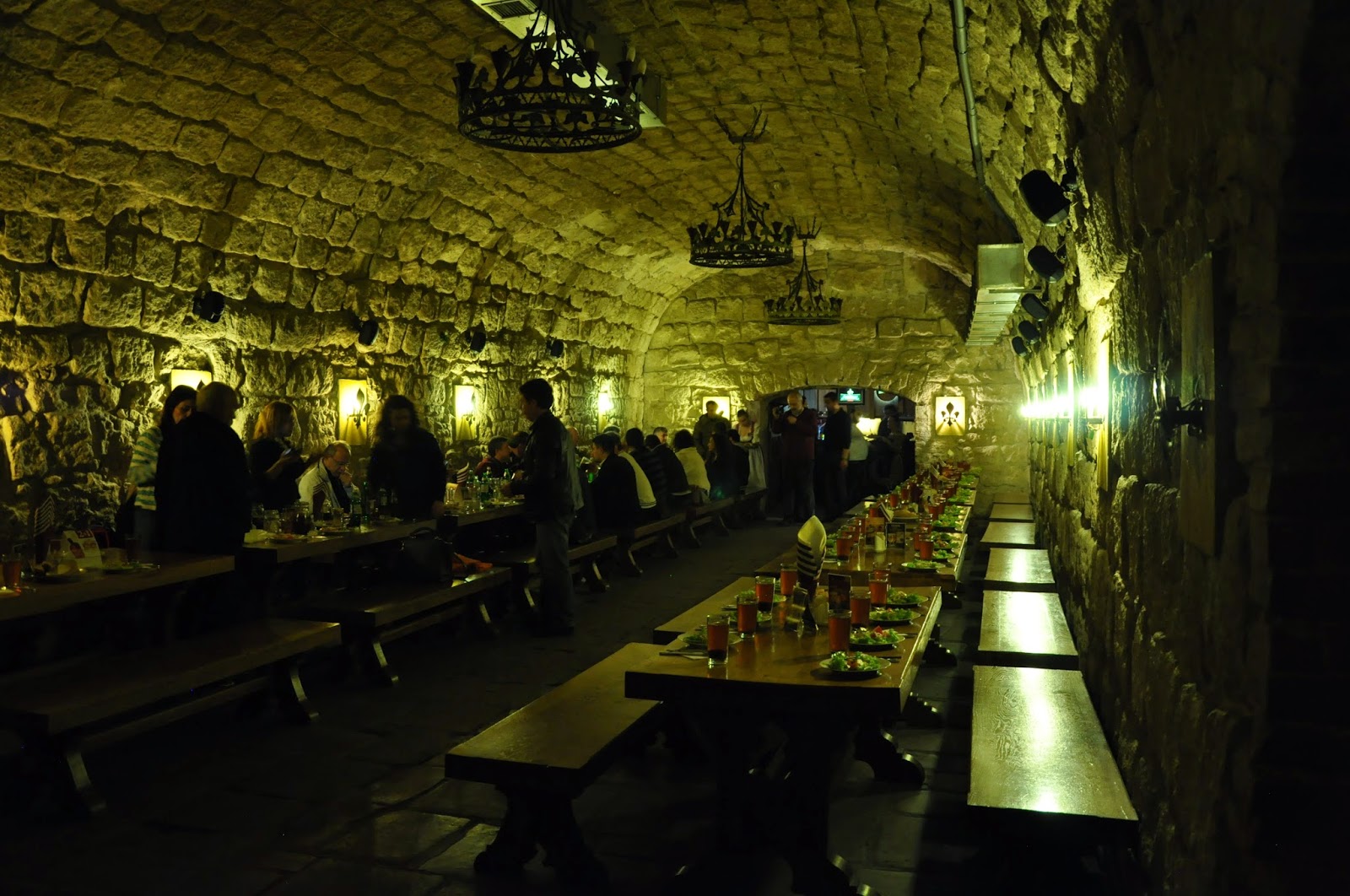 What goes down must come up, I suppose ... so up I go, to the top of the House of Legends.  This funky restaurant features a car perched on the roof along with a famous chimney sweep memorial, a room dedicated to lions, a room for Lviv's underground river (including a live video feed of the water gushing into darkness), the aforementioned cobblestone room, and even a room containing every book ever written about Lviv.  It's dark and crowded, with clunky wooden furniture, and creaky wooden stairs that rise through the center of the building in a narrow, twisting staircase.  The wait staff must have killer leg muscles.  The ubiquitous thumping of feet running up and down is the restaurant's musical score.  The outside of the building features a large metal dragon undulating through the bricks that breathes fire at night.  It's a chaotic collection of randomness, and absolutely worth the visit. 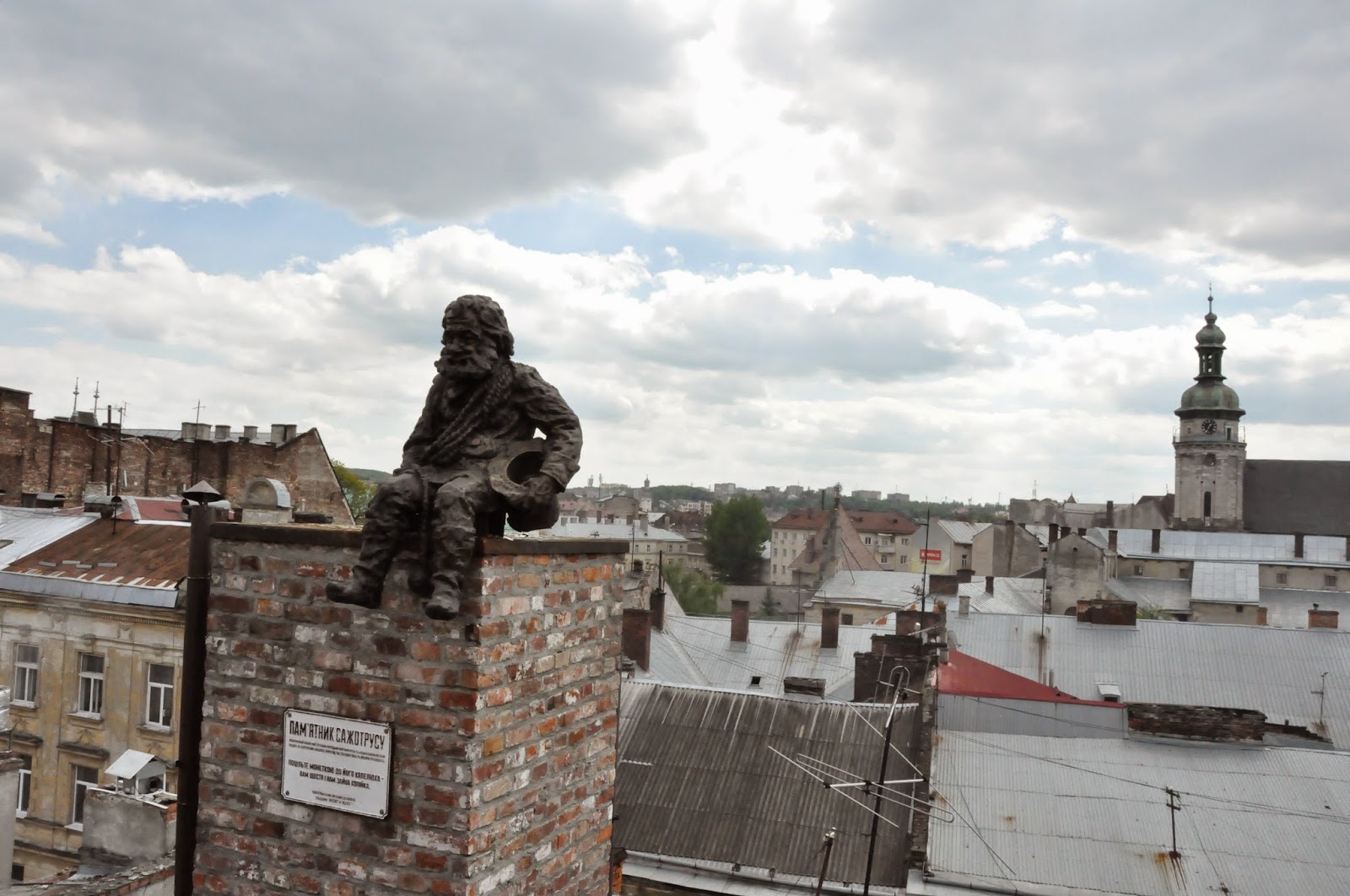 The next stair-stop is the ratusha, the town hall that towers over the center of Ploscha Rynok.  I climb four stories to the ticket office, and then pay 10 hrivna for the privilege to keep going.  For most of the way, the wooden staircases cling to the sides of the square tower with open air filling the space in the center.  Towards the top, the gap is filled by the clockwork mechanism that pulls the weights to ring the bells in the tower.  Just when I think I've reached the top, I realize that light is only coming from a window and one last, narrow, spiral metal staircase is between me and the open patio on the top of the ratusha.  But it's worth the claustrophobia (worse when people try to go up and down at the same time ... definitely NOT wide enough for that!) for the wonderful view over the jumbled chaos of downtown spreading away into the wider streets and green parks of modern Lviv. 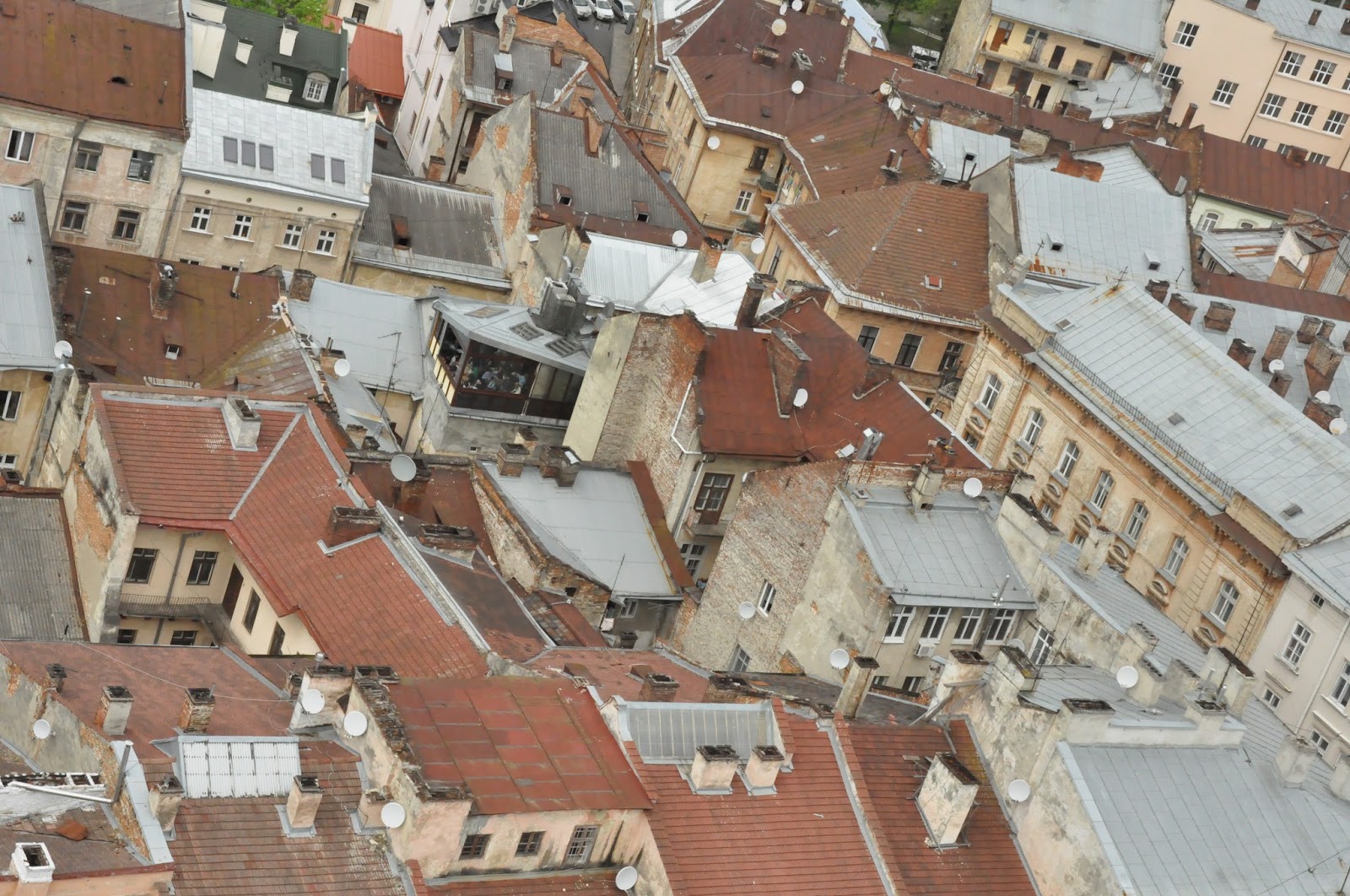 Ah, the stairs.  It's not over yet.  For an even better view over Lviv, I hike up to Castle Hill.  This crest of land overlooking Lviv is home to the last remaining piles of stone that were the fort of 14th century Lviv.  The castle ruins are not impressive; the view is. 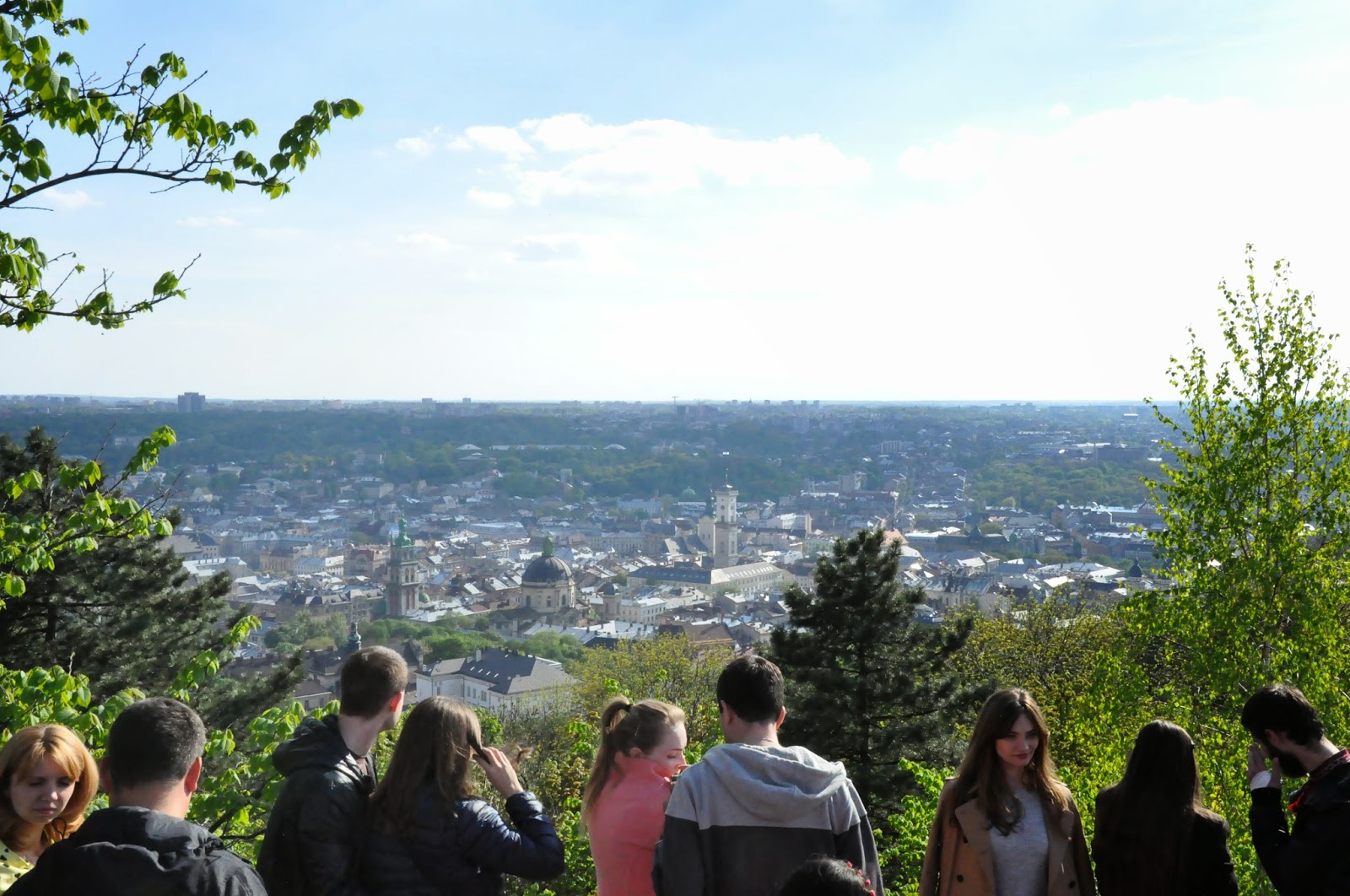 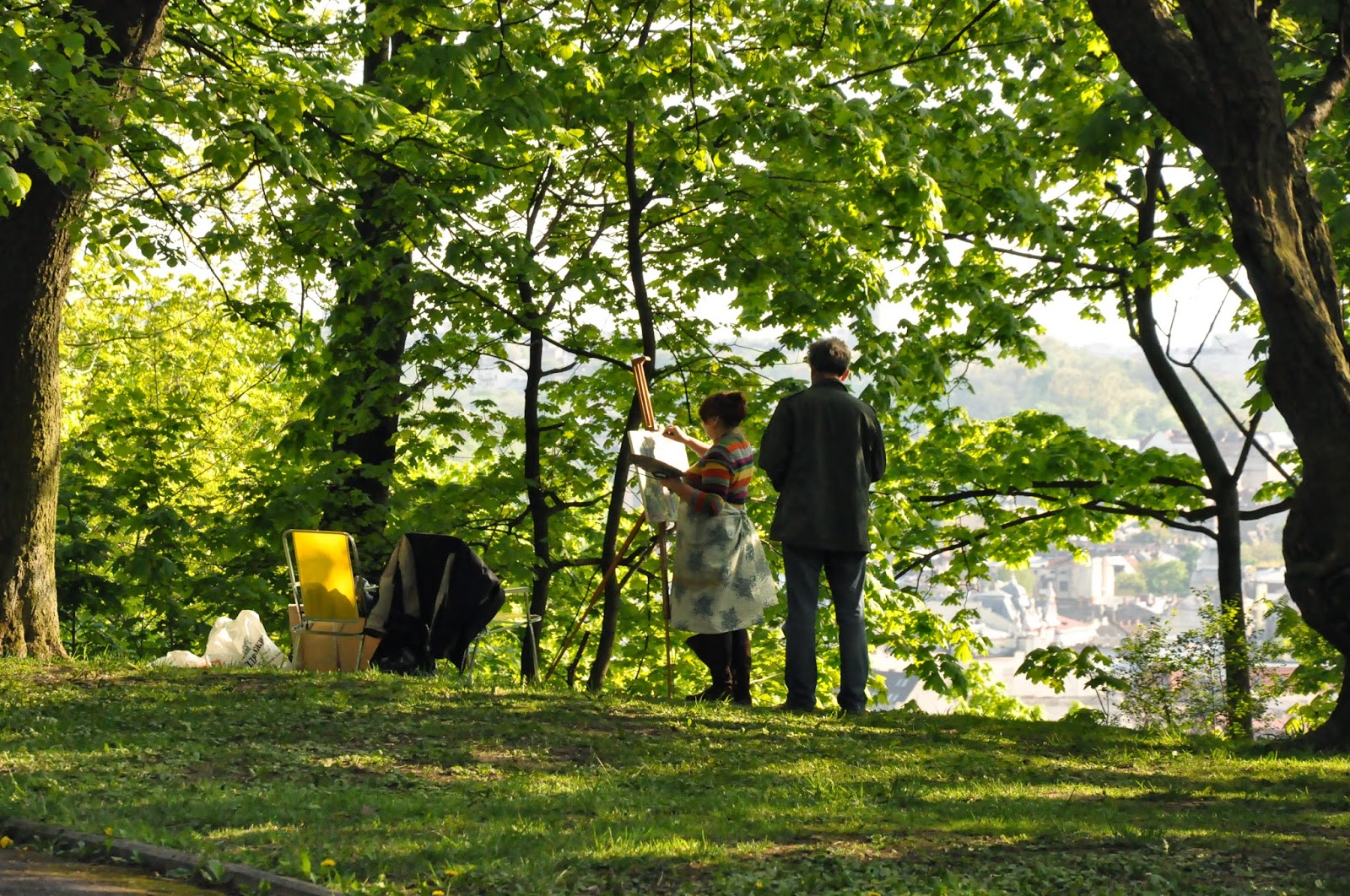 But I have to brave one last flight to go to the original Lviv Handmade Chocolate store.  I walk in expecting a café on the main floor, like I found in Kyiv.  Silly me!  As with all these tall, narrow buildings crammed together in Lviv's city center, the chocolate store just goes up and up and up.  There is a deck at the top of the creaky stairs, and I can see House of Legends' car from my new vantage point.  There are small tables and beanbags tucked under the eaves, but it's a little chilly, so I go down one more flight to a lovely room under a series of skylights that makes it feel nice and open.  The other two floors of the chocolate shop are stacked with bars in a variety of flavors and textures, cans of fruits and nuts dipped in Lviv chocolate, and all manner of other tasty souvenirs.  Because of the never-ending flights of stairs in Lviv, I'm confident the calories balance out. 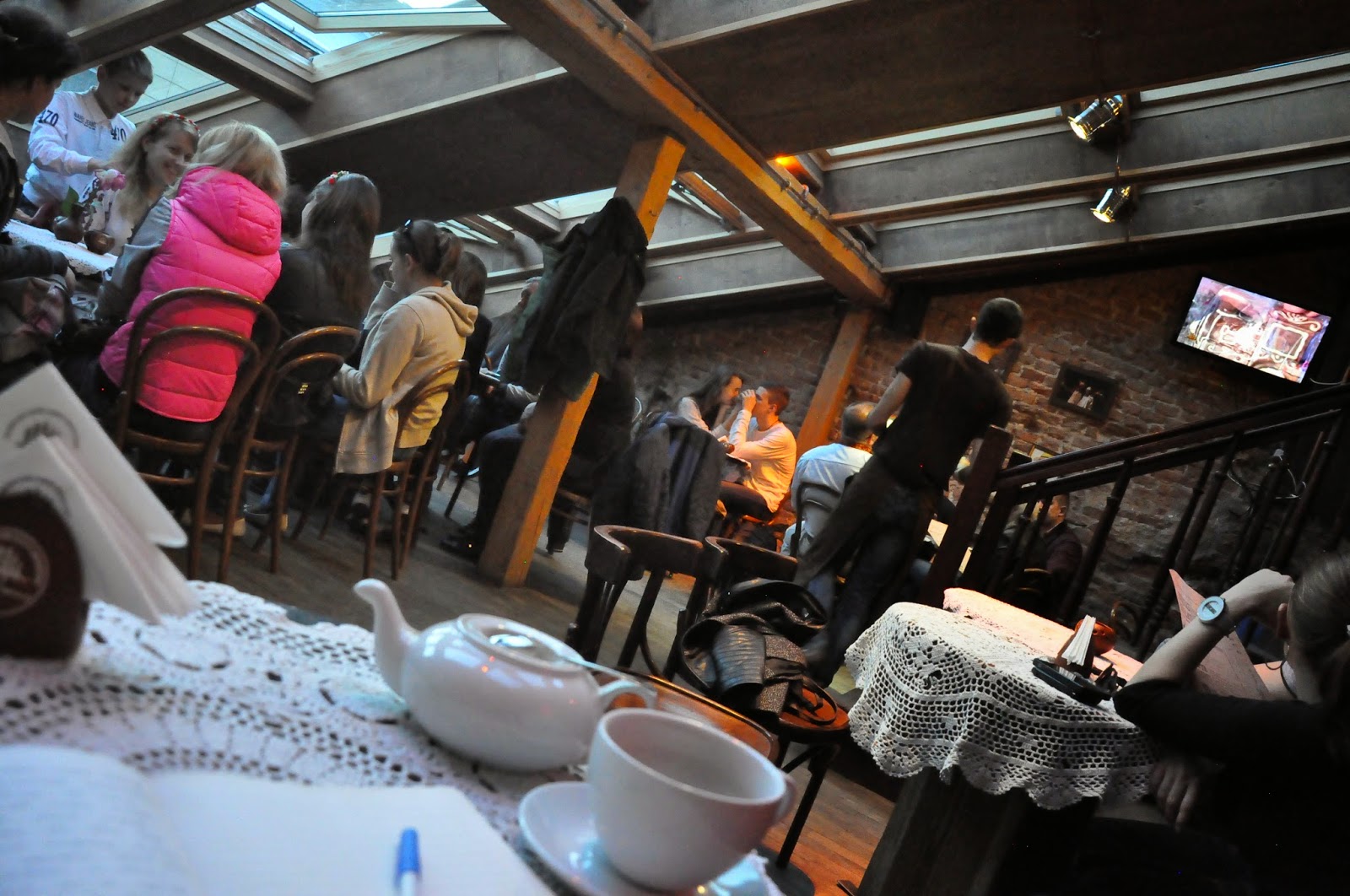 Lviv is a wonderful city with a lot of European flair and just a shade of Soviet memory to keep it humble.  The cobbled streets pulse with life, especially on the weekend when the downtown is closed to vehicle traffic and crowds of pedestrians flock to the restaurants, pubs, and buskers.  The interesting nooks and quirky crannies inspire imagination, and the café culture just begs writers to channel the city's energy through pens onto paper.  A weekend is never enough, of course, but I'm glad to have had a glimpse of the heart of Ukraine's independent spirit. 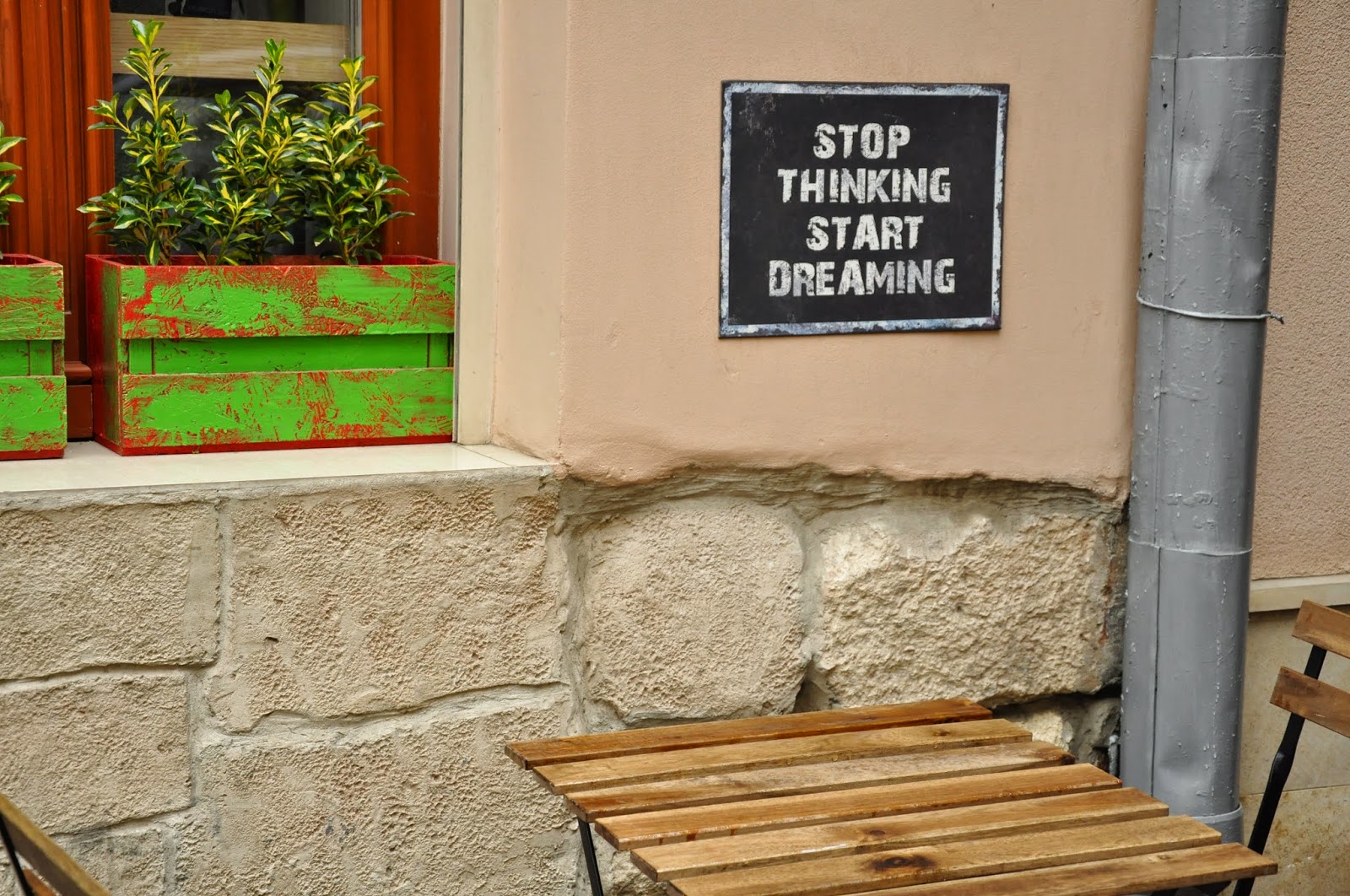