A few years ago, during a very unusual but amazing time in my life, I became friends with some awesome people.  Later, when life became a bit too usual, I went on a road trip to hang out with some of those awesome people.  And it's all their fault that I started to fall in love with Canada. 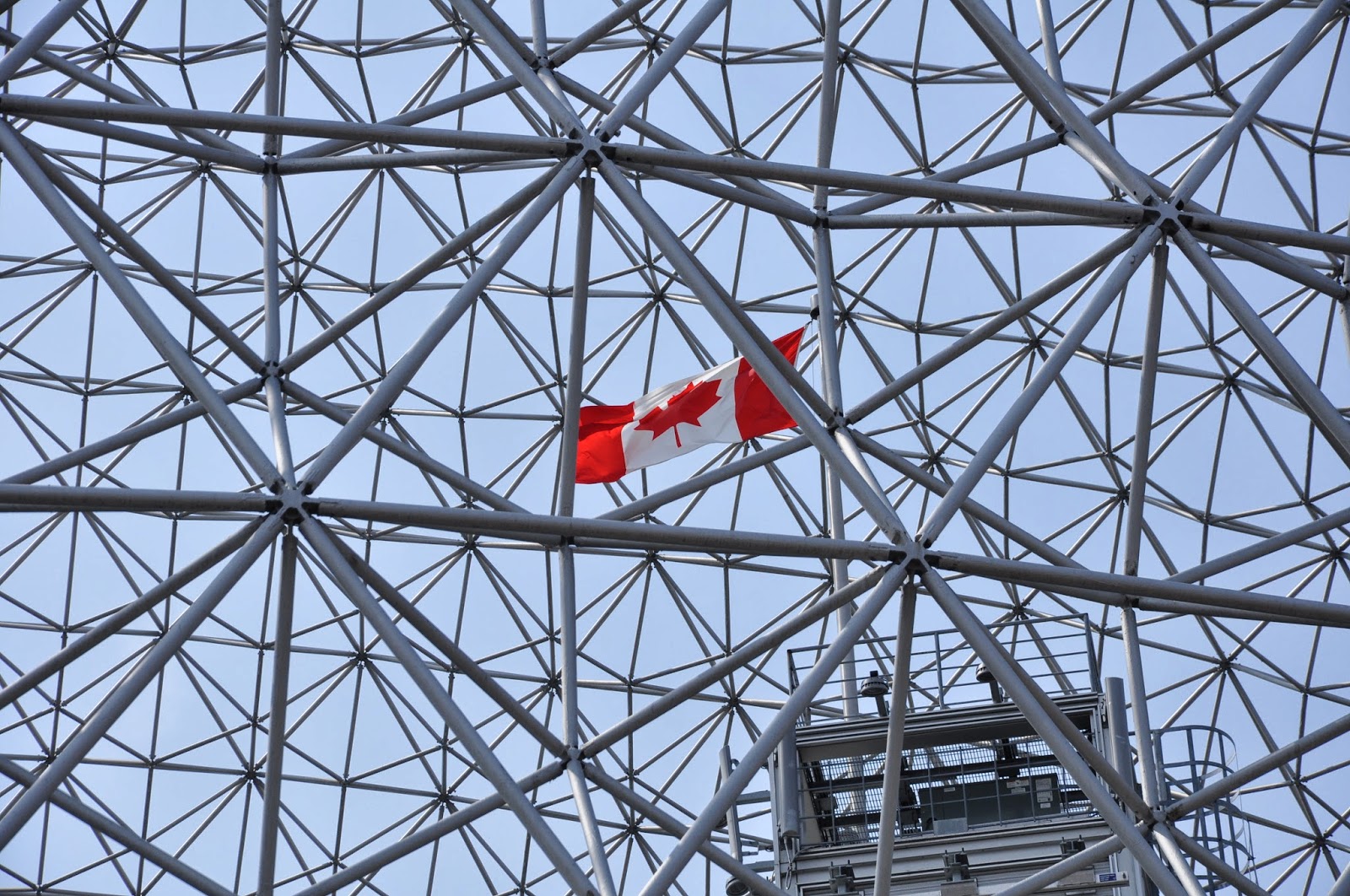 They introduced me to some of the highlights of eastern Canada as I worked my way through Ottawa and Quebec and into the Maritimes.  But I glossed right over Montreal; I only spent two hours walking around the Old Port in the rain with the pups during a break on my way from Ottawa to Quebec.  So last January, when I was still wanderlusting after an amazing time in Antarctica and Chile, I took off to spend a bit more time in Montreal.

Montreal is a fun city.  I got completely soaked on my first short experience and it was bitter cold January on my second trip, and I still think its fun!  So without further ado, here are some suggestions if you've only got a day to explore. 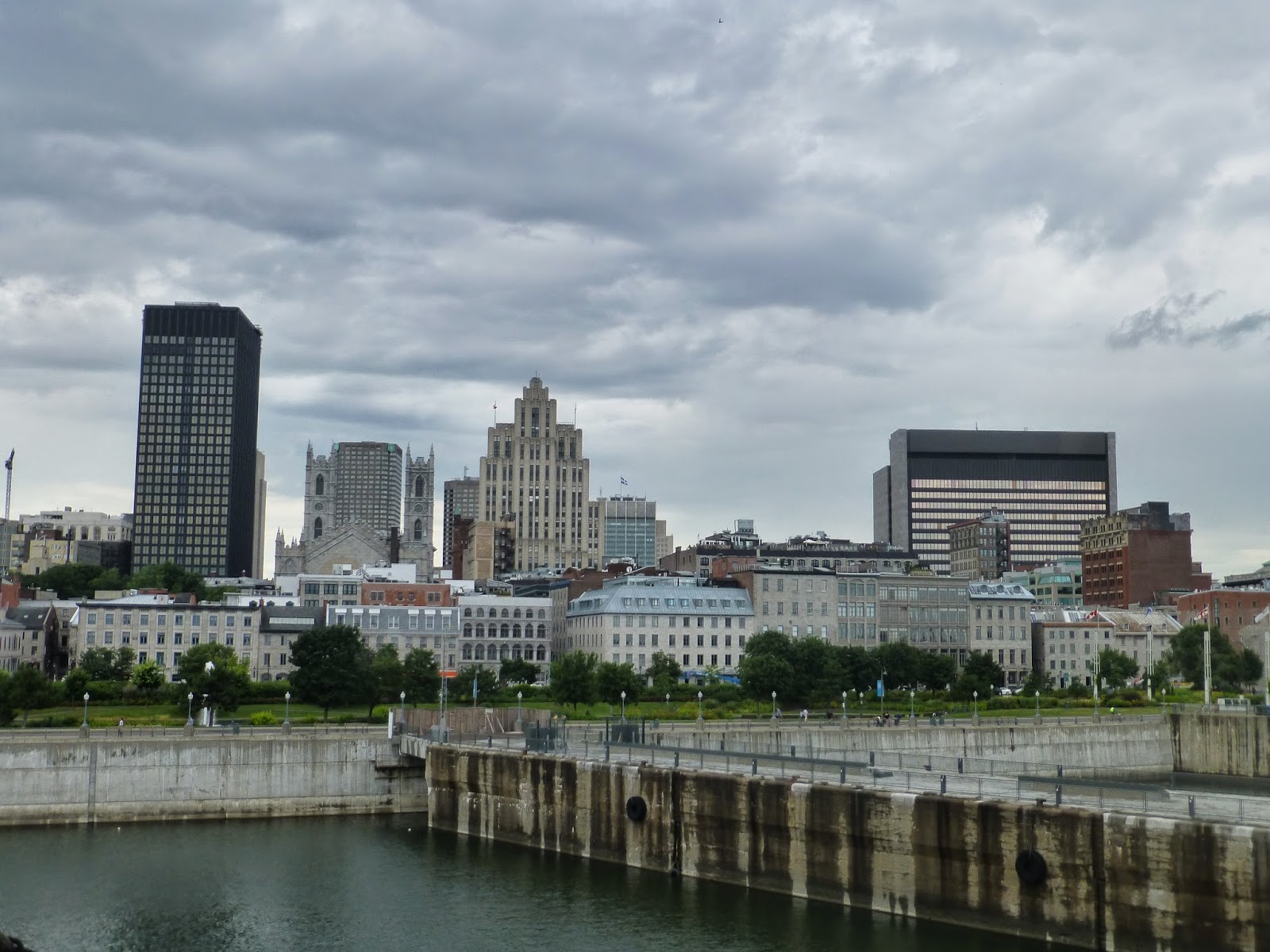 Walk around Old Montreal.  I could easily spend an entire day roaming through the narrow cobbled streets, strolling along the waterfront, and popping into the various art galleries, cafes, restaurants, and souvenir shops.  This is the section of Montreal that reminds me the most of Europe, and it is a pleasure just to meander through slowly with no particular destination in mind.  When the port was closed in 1976, the government spent a few years deciding what to do with the space, and the current tourist-friendly design started with the installation of a park running the length of the quays along rue de la Commune.  Now, Vieux Port is a source of never-ending entertainment with restaurants, exhibits at the Montreal Science Center and some of the other remaining port structures, an IMAX theater, Segway tours, launch points for various river tours, and space for shows and concerts like Cirque du Soleil and Igloofest!  Place Jacques Cartier, just across the park from the waterfront, is a lovely open plaza featuring buskers in the summer, and an urban sugar shack where you can purchase hot maple cider in the winter and maple taffy on snow in the summer.  You might encounter some excitement outside the City Courthouse at the top of the hill above Place Jacques Cartier--we ran into a group protesting against animal cruelty, and they all brought their dogs along for the fun.  Head south down rue Notre Dame to Notre Dame Basilica, a beautiful example of Gothic architecture, or north to Marche Bonsecours, a one-time city hall and public market that is now one of Canada's heritage buildings and home to a collection of interesting boutique stores. 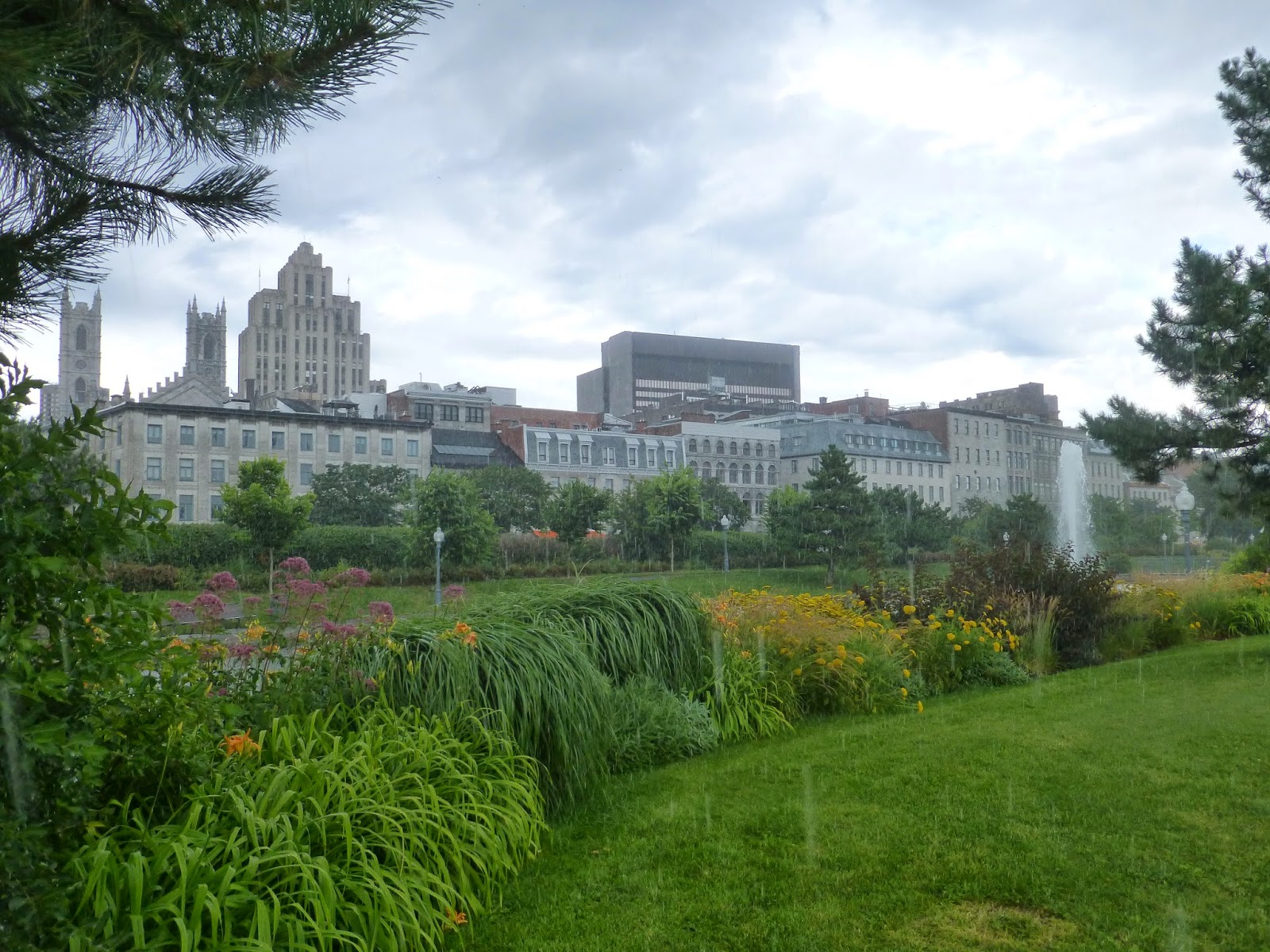 Explore rue Sainte Catherine.  This street is the heart of commercial Montreal, and is a several-mile-long shopping and dining extravaganza.  Seriously, every store you can think of and every type of restaurant you can imagine can be found someone along St Catherine, along with cinemas and theaters and churches and university buildings.  If you really want to feel like you're in a big modern city with the bright lights and hordes of people, go here. 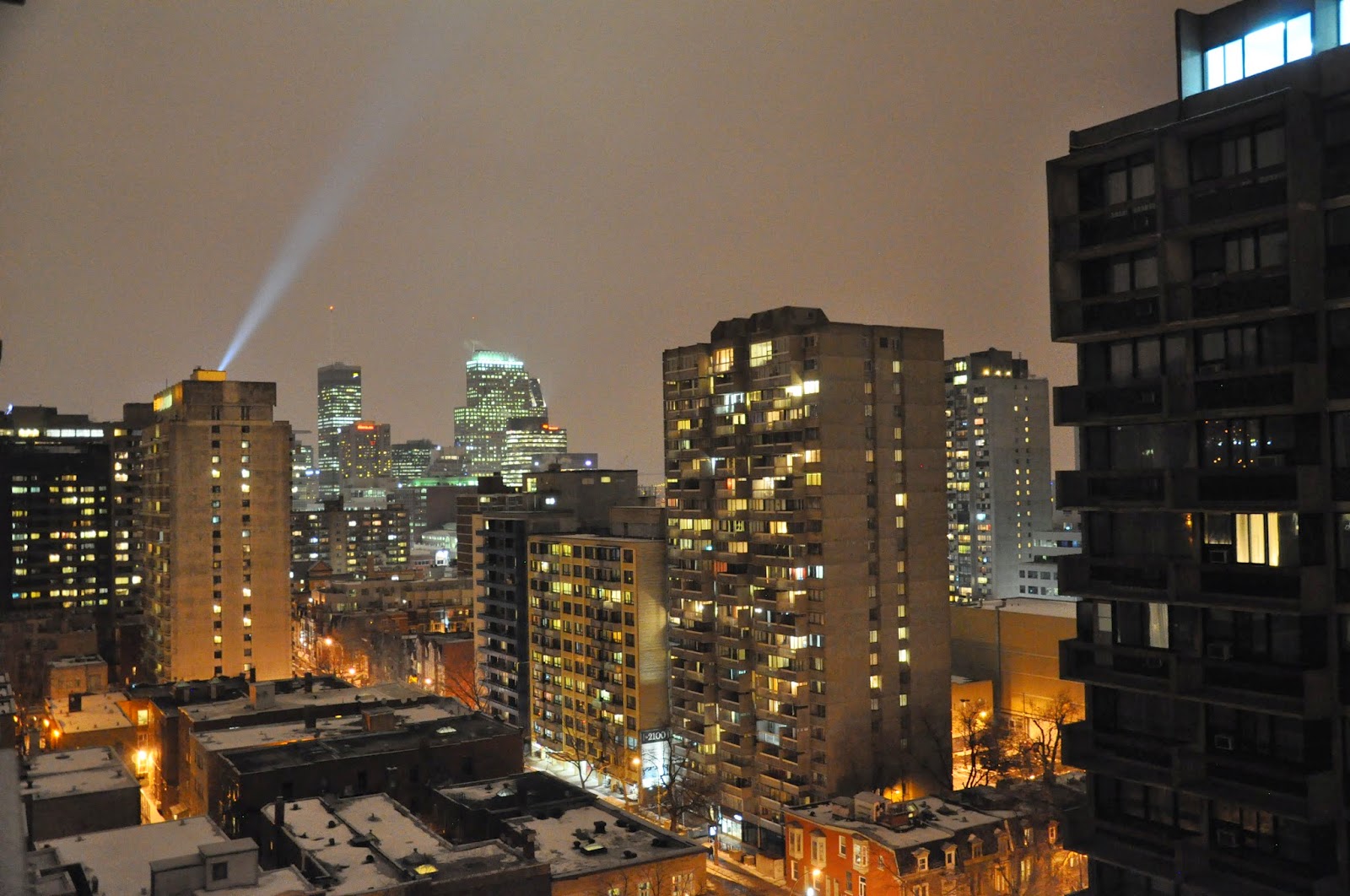 Walk/run/ski in Parc du Mont Royal.  Until I was investigating a place to take the pups that wasn't crowded with people on sidewalks, I'd never given a thought to where Montreal gets its name.  Then I found Parc du Mont Royal and the connection was immediately obvious.  Mont Royal is the highest point in the city, and sits within a huge park that is popular with runners, skiers, snowshoers, sledders, cyclists, etc.  In January, the paths around the park were largely cleared for the runners and walkers, but each was paralleled by a ski track for the cross country skiers.  We walked up to the Kondiaronk Belvedere for a stunning panorama over the entire city.  I can only imagine how great the park is during the summer.  Plus I just found out about the tam tams!  Impromptu drum festival in the middle of the park?  I'm in. 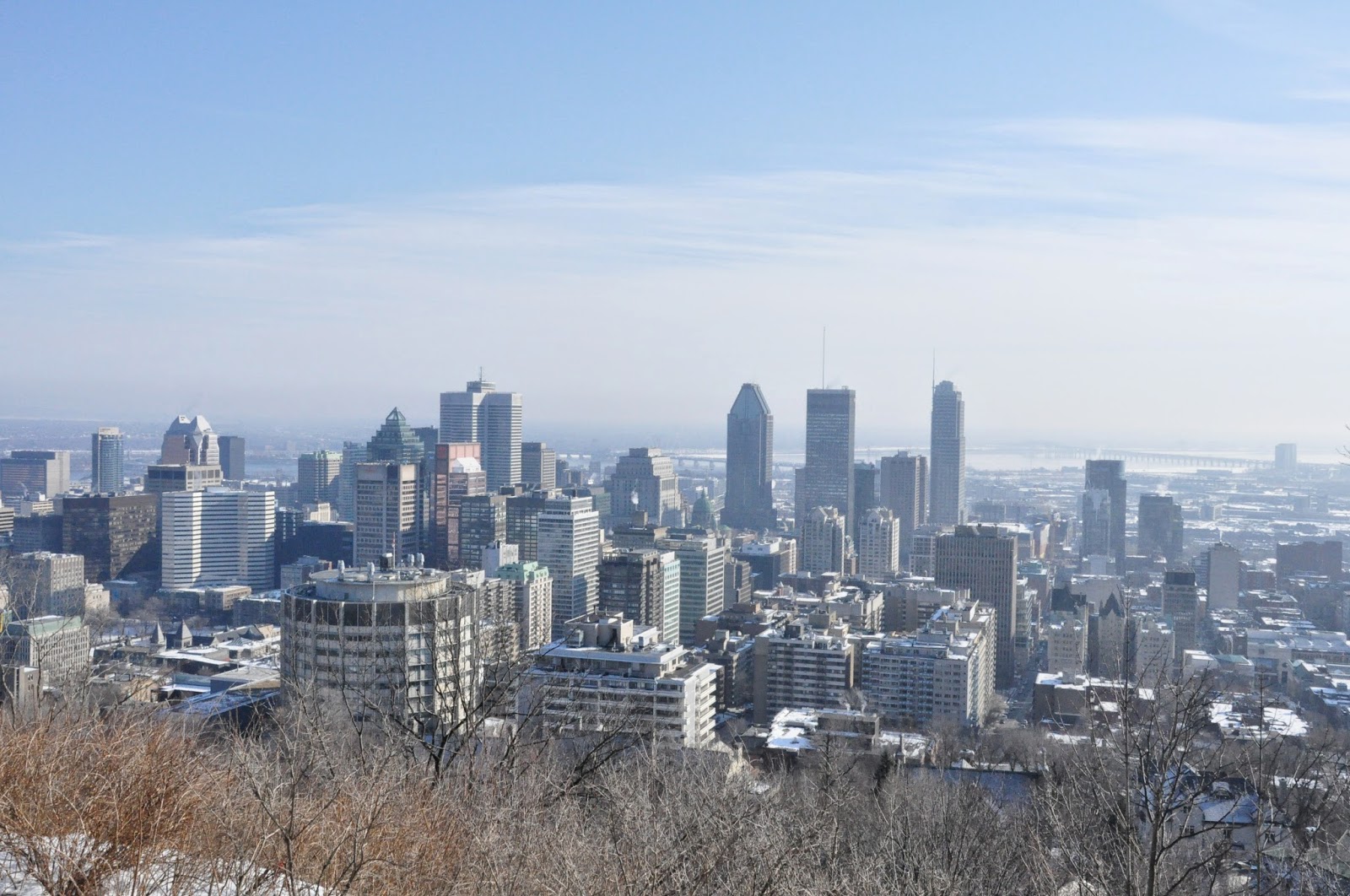 Check out Olympic Park.  Remember when Montreal hosted the Olympics?  My parents hadn't even met, so I don't, but the summer games were here in 1976.  And the stadium built for that occasion still remains, of course.  It looks like a giant spaceship.  The deserted, neglected air of the Olympic park lends to its otherworldly aura, especially when you're visiting in the middle of winter and there is absolutely nobody else around.  I half expected a security person to chase me down for trespassing because the place was so abandoned!  One of the buildings used during the Games, the velodrome, was converted in the 1990s into a Biodome.  It contains a series of exhibits recreating various ecosystems of the Americas with living plants and animals, as well as some hands-on exhibits geared towards kids.  Adult entry is about $19.  Right across the street from the Olympic Park are the Montreal Botanical Gardens and the Insectarium, so there's plenty to investigate if you make the short trek out of the city center. 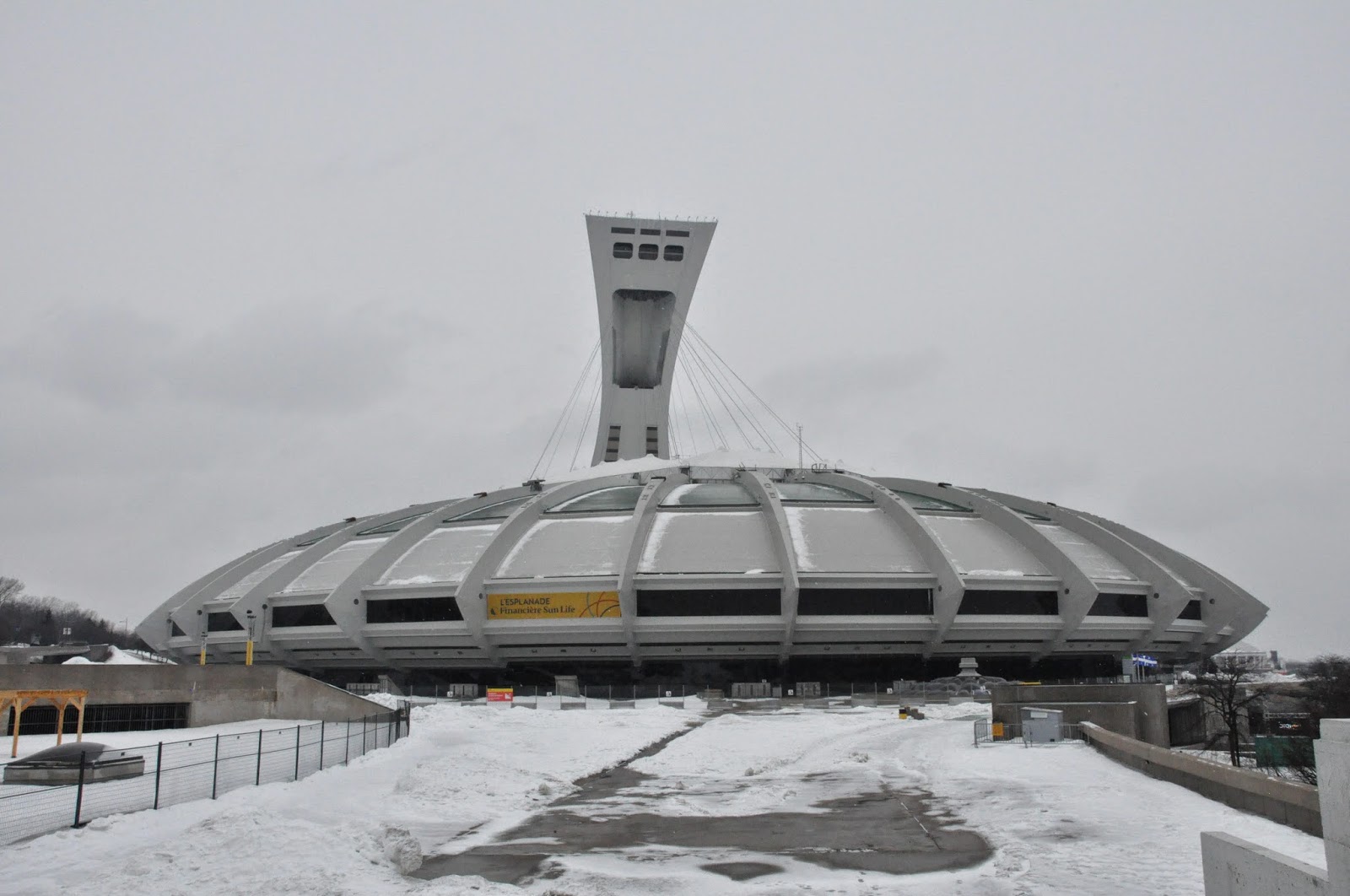 Find the Biosphere!  I caught a glimpse of this bizarre landmark when I was trying to find the Molson brewery (more on that in a second) and dragged my friends out to see it in person before leaving Montreal.  At the time, I had no idea what it was except it's super cool and strange!  Who would expect to find a giant geodesic dome in the middle of a park on an island in the Saint Lawrence River?  The Biosphere was built to host the United States' exhibit at the Worlds Fair in 1967, where it turned out to be the most popular pavilion.  After the fair, the U.S. donated the building to Montreal.  It used to be enclosed with transparent acrylic panels, but they weren't replaced when they were damaged in a fire, and now the structure is open.  In the 1990s, the Biosphere became a self-sustaining environment museum with a geothermal system, wastewater treatment plant, green roof, and wind turbines.  You can visit the museum ($12 + parking) and also enjoy walking and biking on the network of paths on Saint Helene Island. 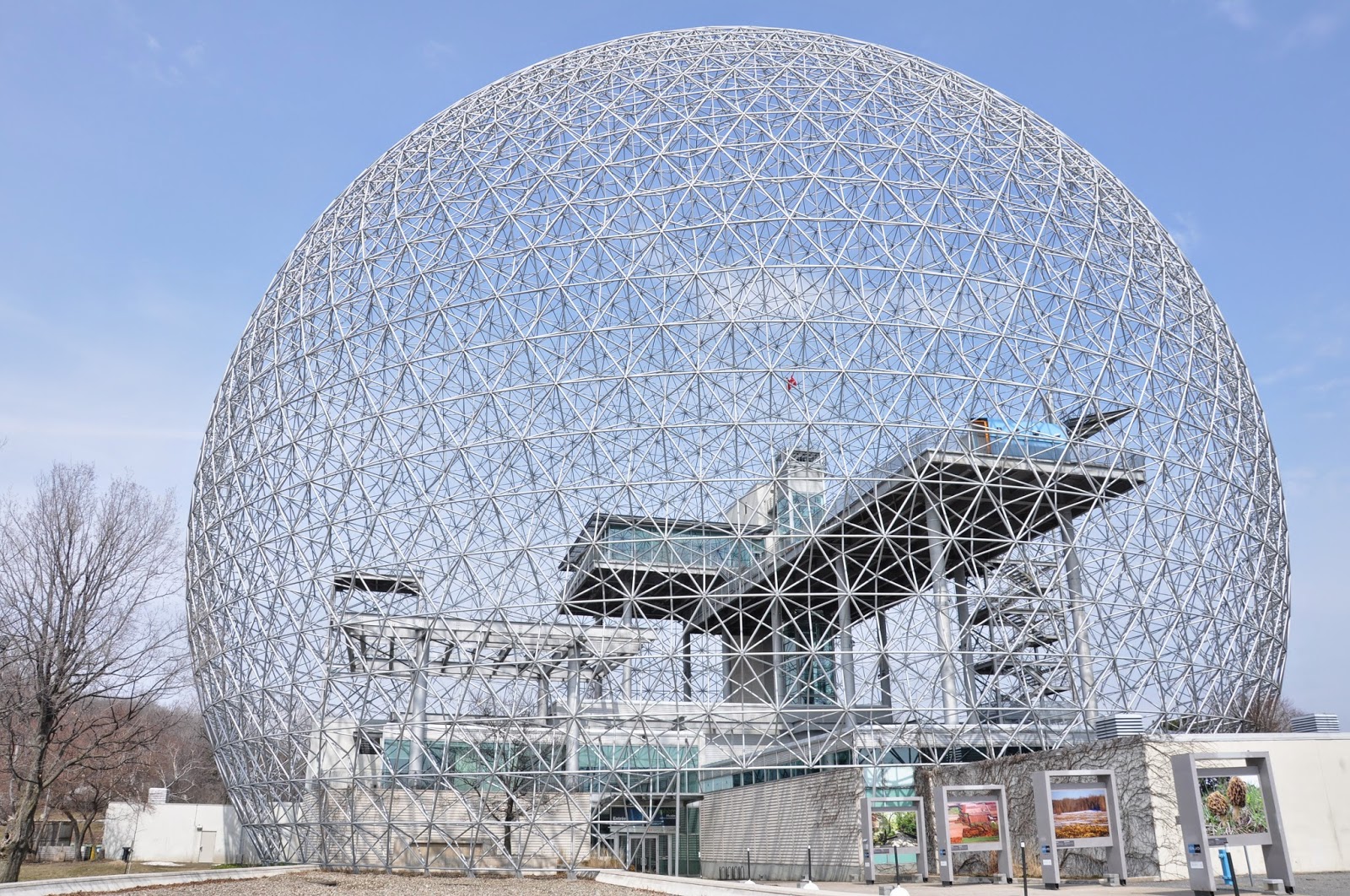 Montreal was the first time I used HomeAway.com to find a place to sleep, and it worked out beautifully!  We had a great little condo right in the middle of the Gay Village and half a block up from Saint Catherine's and all the bars, cafes, and restaurants.  Pups was welcome and the neighborhood was perfectly safe at all hours.  And we were just up the road from one of the best poutine places in Montreal (at least according to my friend's Internet research)!  On Rue Wolfe, just a few meters off of Saint Catherine's, you will find Le Resto du Village and their delicious, delicious poutine.  That was definitely my entire dinner one night.

Oh right, and Molson!  Sadly, Molson is my one suggestion of something NOT to bother with while you're in Montreal.  The Molson Brewery was founded in Montreal in 1786, is supposedly the oldest brewery in North America and is one of the oldest companies in Canada.  The original brewery is right on the Saint Lawrence River and walk-able from the fringes of Old Montreal and also the fringes of the Gay Village, but it'll take at least 20 minutes and it's along a busy road without much scenery.  And it's not worth it because THEY DON'T OFFER BREWERY TOURS!  We trekked all the way out there and had high hopes, especially after seeing the maze of brick buildings that makes up the brewery (think Willy Wonka, seriously!), but we quickly noticed there was no apparent visitor entrance and we had to track down a security guard who proceeded to crush all our hopes and dreams.  Now we're boycotting Molson until they offer brewery tours again.  (But I still give them props for having a really neat-looking brewery.) 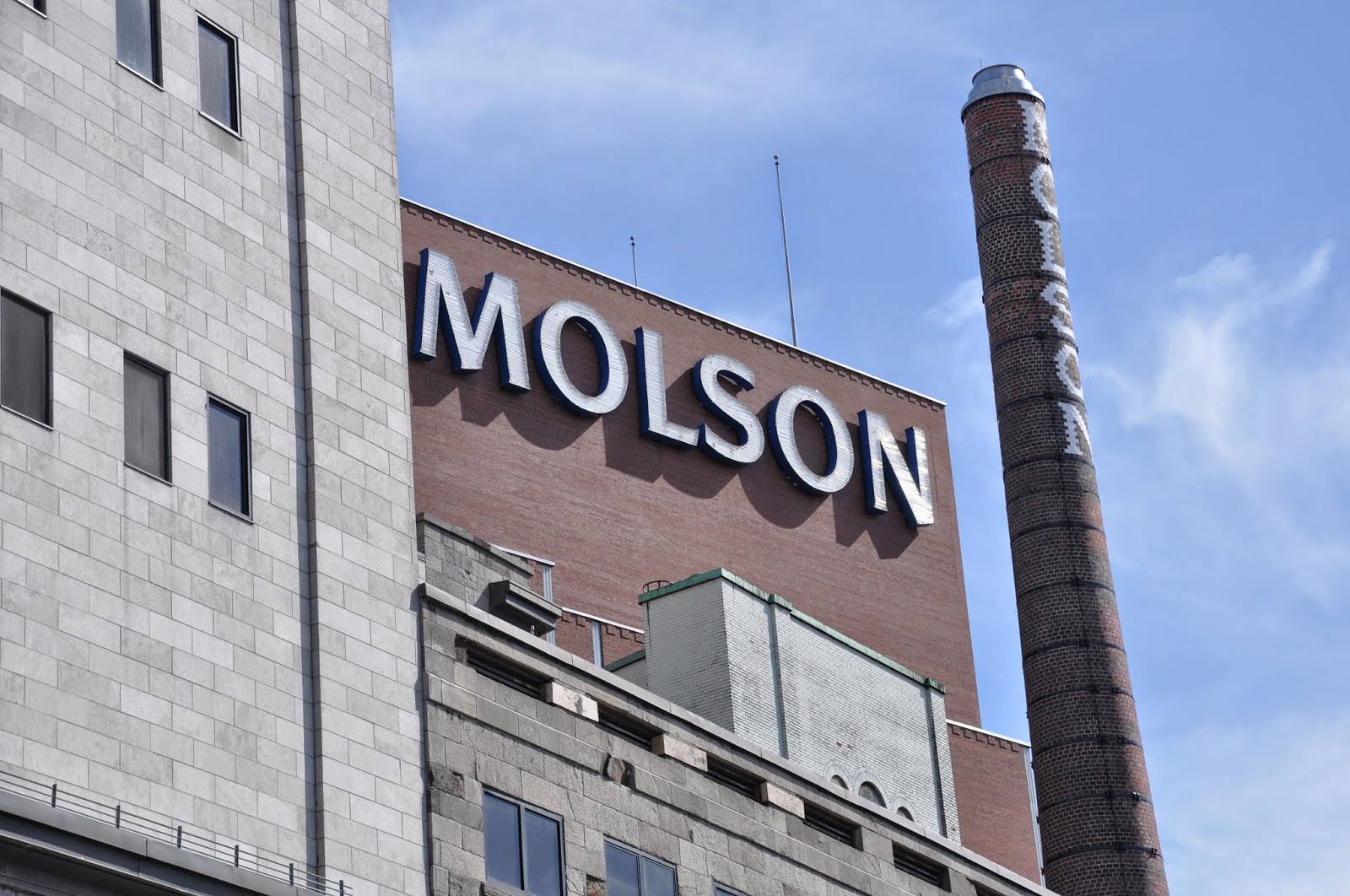 I know Montreal has plenty of cultural offerings as well, from museums to theater, but I don't have personal experience to share or use for recommendations.  When you travel with a pup, you end up spending a lot of time outside!  We covered over 20 miles in one day just walking around investigating!  And then this had to happen:


A final brief comment on Montreal nightlife, which I still haven't experienced to its fullest despite going to an outdoor rave on a pier in January: this city is famous for its party scene.  As I mentioned already, Saint Catherine's is a good starting point to find all sorts of bars and clubs.  Rue Crescent is a bustling area, and probably has the highest concentration of Irish pubs in all of Quebec.  Some bartenders recommended restaurants and cafes in Old Montreal for late night places with food and drink but not as much loud music and craziness, and I was specifically told that the "young, hip" people hang out on Rue Saint Denis in the neighborhood called Le Plateau, which is just northeast of Parc du Mont Royal. 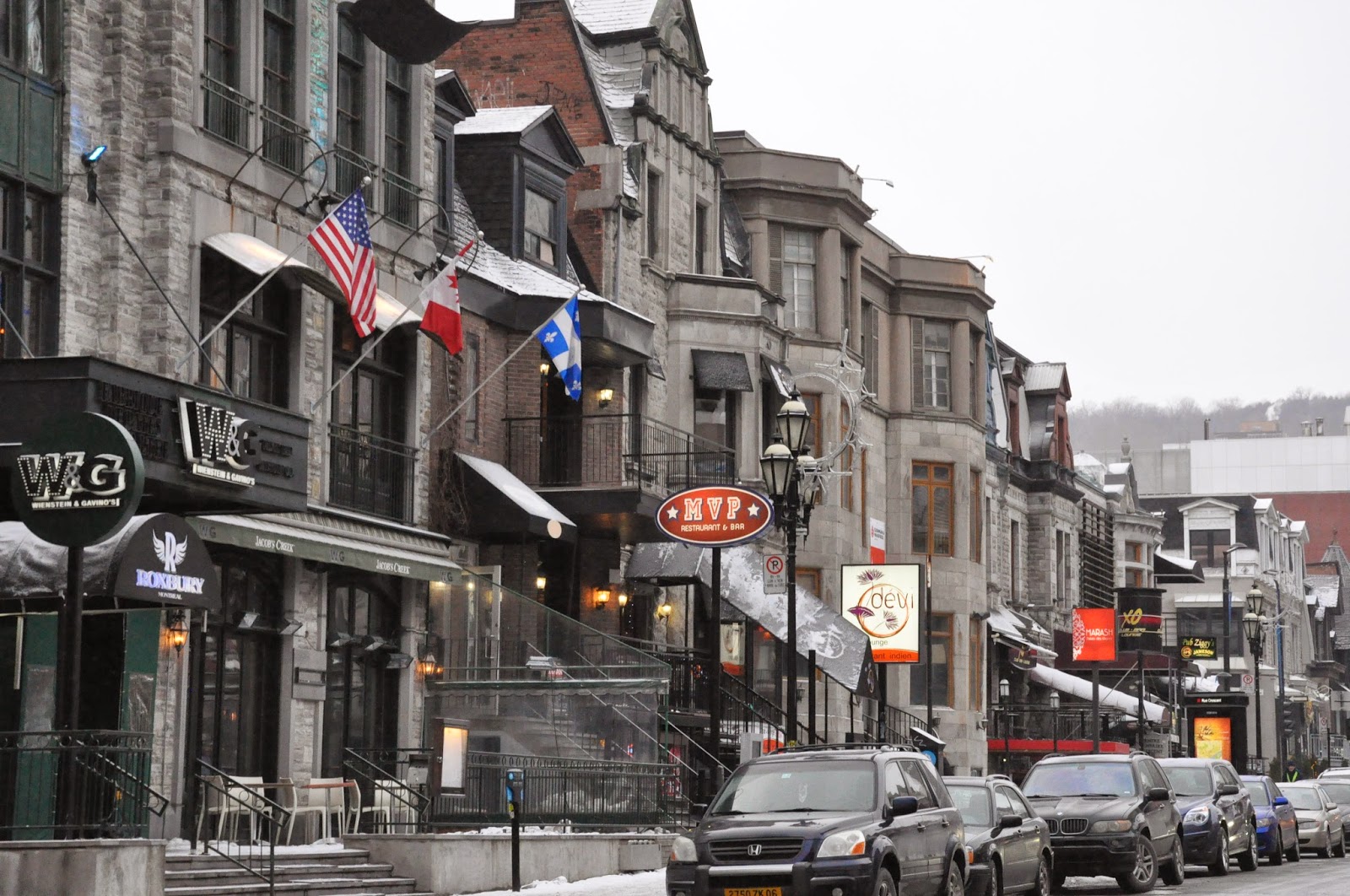 Prepare yourself for a lot of walking and enjoy your time exploring Montreal!  Happy Canada Day! 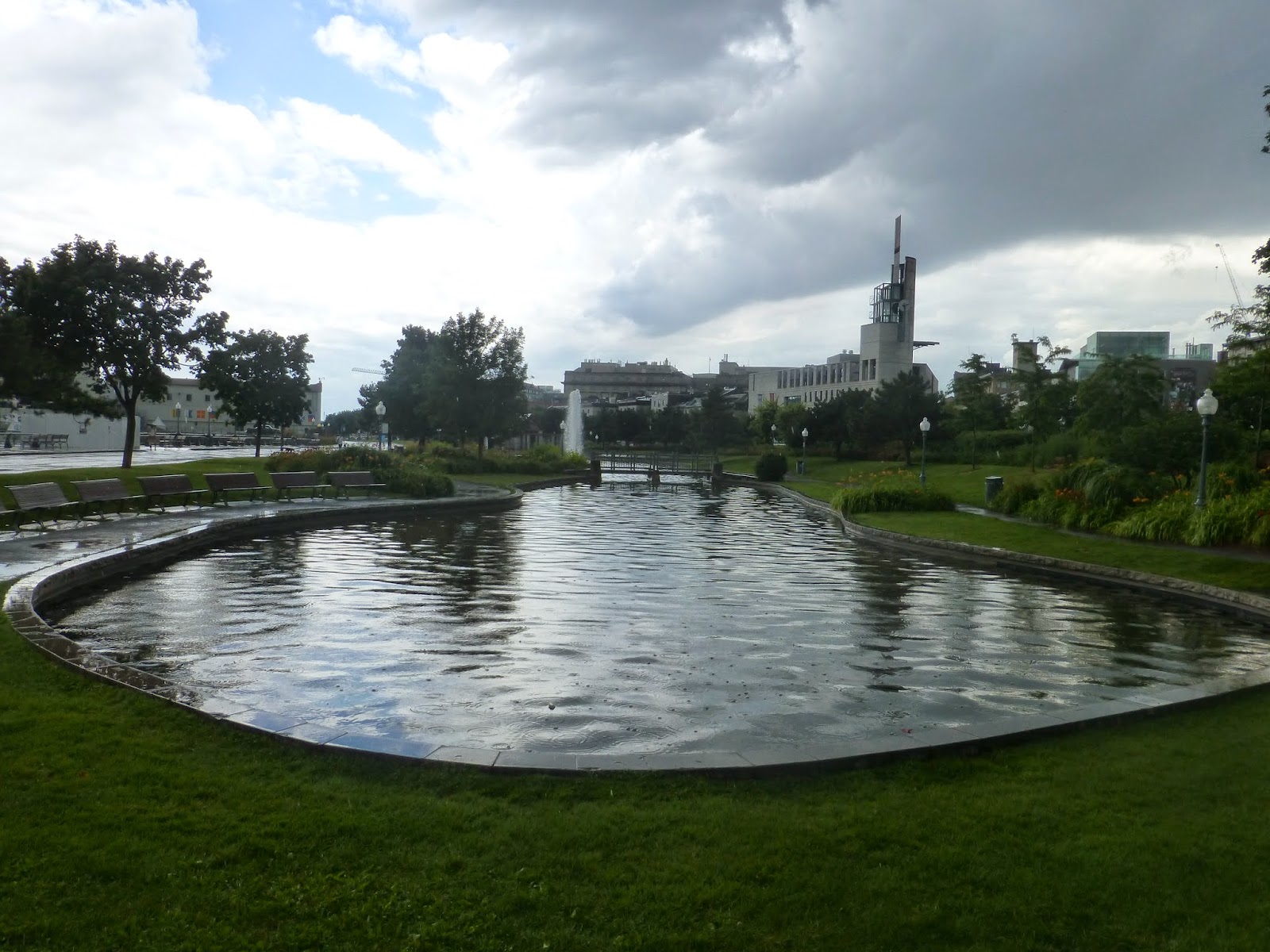 Photos not available to be borrowed for any reason.  Thanks!
Email ThisBlogThis!Share to TwitterShare to FacebookShare to Pinterest
Labels: Canada, food, Mwenzie