Not too long after I moved back to America, Tough Guy-style races became a craze that swept across the nation and has not lost any momentum as the years have gone by!  It seems to me there is a trifecta of major race companies in the US: Tough Mudder, Spartan Race, and Warrior Dash.  There are all sorts of more regionally-focused mud and obstacle runs as well, but these three went nation-wide and are now working towards international domination as well.

In 2011, my brother rounded up a group of friends to run the Tough Mudder race being held at Wintergreen Ski Resort in Virginia in October.  Since I was conveniently working in Washington, D.C. at the time, I was roped into the team and I brought a few friends along as well.  Every one of us on the team of 15-ish people was new to Mudder, but fortunately two of us were Tough Guy alumni and had a vague idea what we were getting into.

Except not!  Tough Guy is a set course on property owned by the organization company, so the obstacles are terrifying but the terrain, while challenging, isn't as significant of a factor.  Tough Mudder rents space, sets up for the race, and tears down afterwards.  This means that the obstacles they build aren't nearly as scary and huge, but they made up for it at Wintergreen by taking full advantage of the mountains.  By the end of the race, we had climbed 4000+ feet and descended 4000+ feet and one obstacle was simply-- run from the very bottom to the very top of this ski run.  That ski run was NOT a bunny slope!

The other thing that made Tough Mudder difficult was the fact that it was around 50 degrees Fahrenheit, and you're soggy from the very beginning and you never have a chance to dry off or warm up.  For some of our team members, the soggy and cold factor was a big problem to overcome.  For all of us, it was energy-sapping.

And enough negativity now, because the race was naturally a lot of fun!  Initial charge down a ski slope, then up a short ski slope to the Berlin Walls (wooden walls that usually require a boost from teammates to reach to the top), then down another ski slope, over some round hay bales while getting blasted with fire hoses, up a slope, bear-crawling under some nets, through the woods, over greased and unstable monkey bars (I fell off immediately and just swam, no big deal), walk the plank over another pool of water (didn't fall off that one), and then into my second-most-hated Tough Mudder obstacle, the Arctic Edema.  In two words: ice bath.  And when it was already chilly outside, this one was awful!!  You have to completely submerge yourself to get under the wall that's halfway through the obstacle, and even though you're only under for maybe one second, it's so cold it knocks all the air out of your lungs.  I never recovered my body temperature after that obstacle.  But every water obstacle afterwards also felt warm!  :) 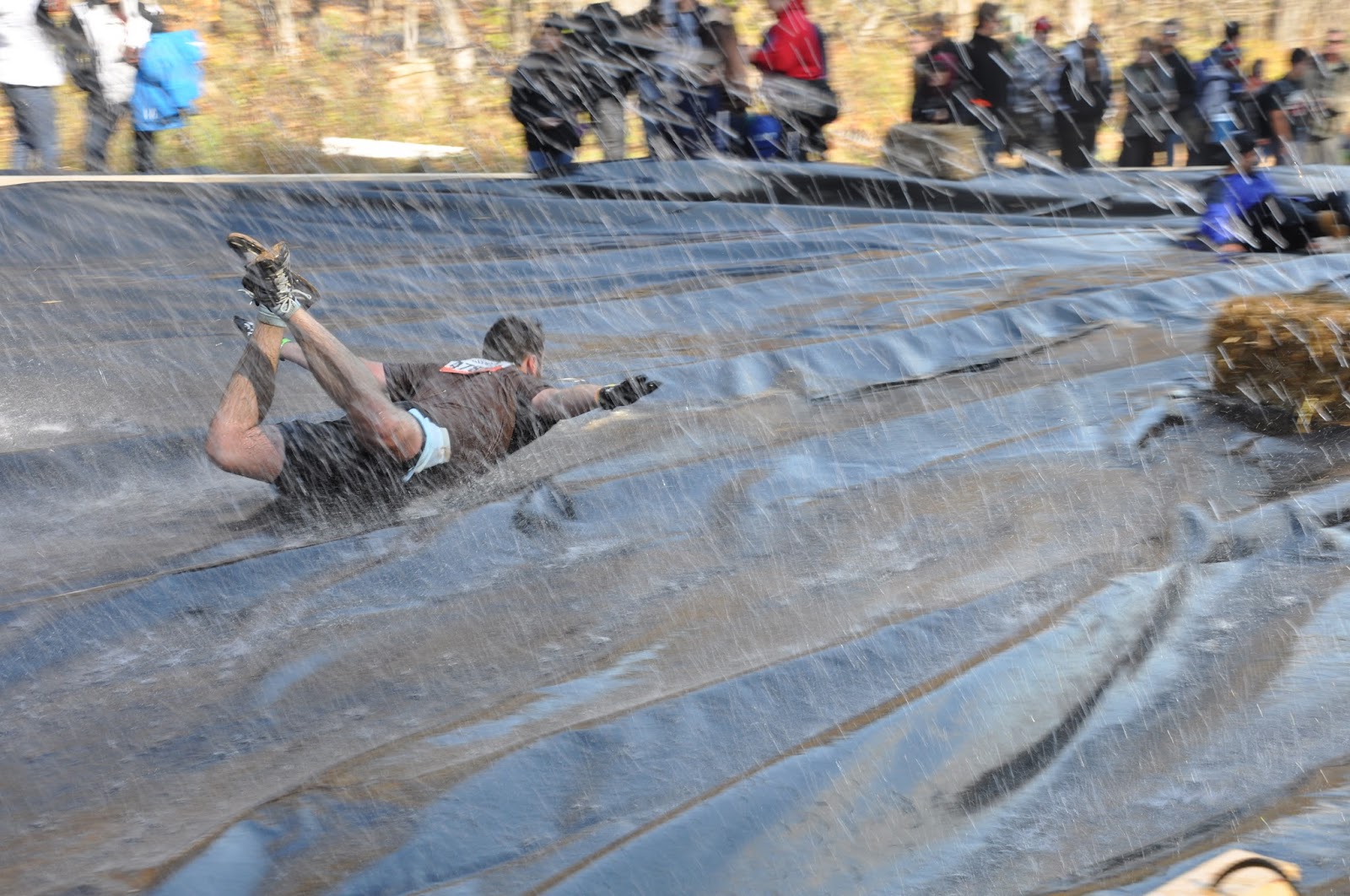 From there, we climbed some rope ladders, did a slip-n-slide and a water obstacle where you had to go under a bunch of logs so repeated submersion, carried some logs, then the dreaded run up the ski slope, low crawl under barbed wire, some more hay bales, a jog through the resort's golf course, a "mystery" obstacle that involved a straight drop into a dark tunnel (the initial gut check was significant, but it turned out to not be so bad since the slide was only a couple feet long and then you were out in daylight again), some more rope obstacles and climbing, and then my favorite Tough Mudder obstacle. 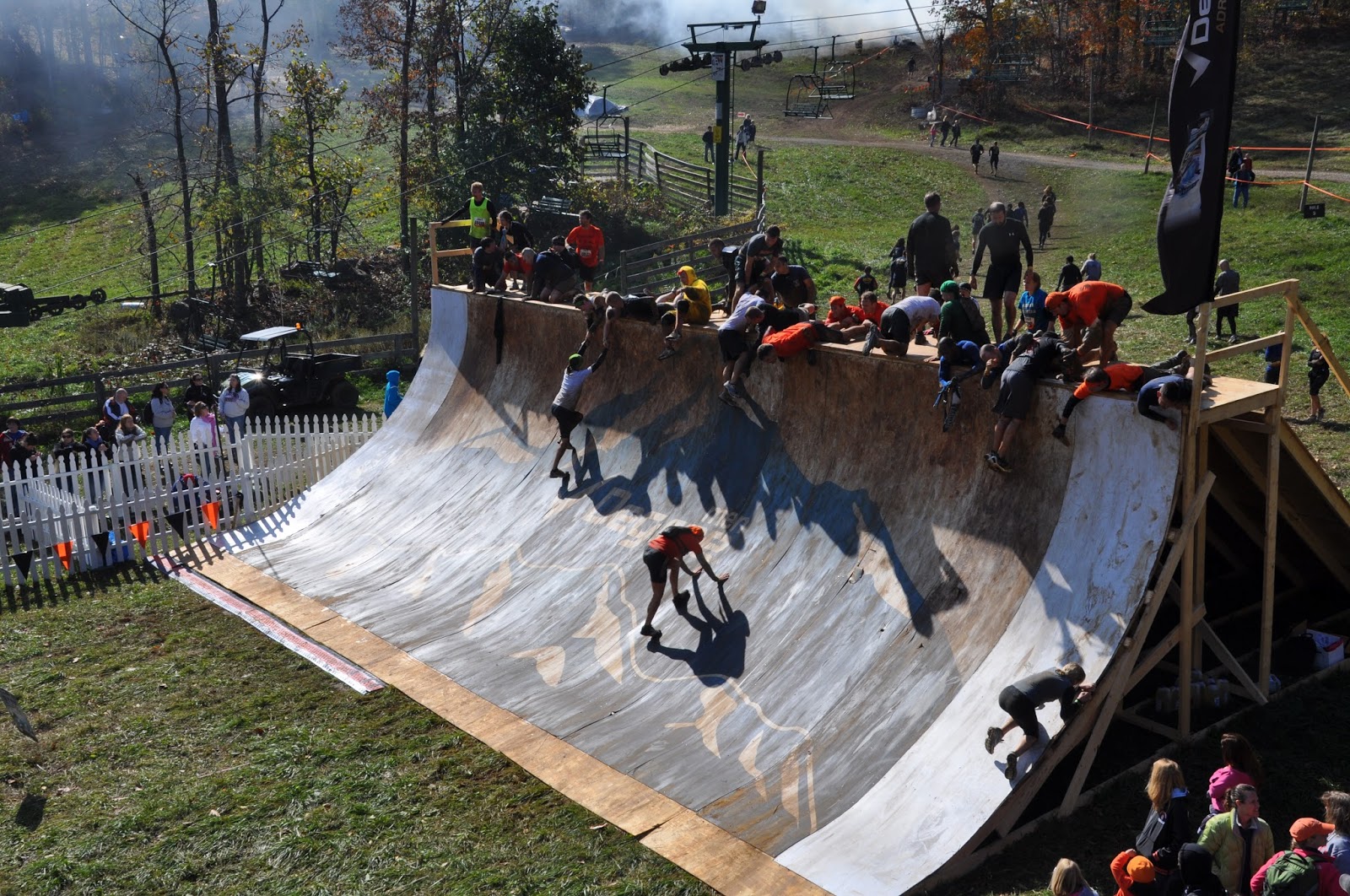 It is called Everest.  Other participants hang out on top (once they've gotten up there) to help pull up the people coming behind them.  What you have to do is sprint as high up the curved wall as you can, and then just launch yourself into the waiting hands of your teammates or random strangers and hope that they get a solid grip on your wrists and can then pull up up the wall.  This is a hugely popular obstacle for the spectators too.

After that, we were into the home stretch.  Had to run through some fire and up another ski run and then my most-hated Tough Mudder obstacle, which is Electric Eel.  A series of free-hanging electric wires, some of which are powered and some of which are not, that you have to sprint through to reach the finish.  I don't like this obstacle because you can't train for it, it does not require any physical prowess, and I think it's kind of pointless.  But it's at the end of every Mudder race, so you just cover your face with your arms and run like hell.  And then ... the finish!  Free beer!  Orange headband!  You're a Tough Mudder!!

Tough Mudder advertises itself as the toughest event on the planet.  But the thing is, almost anyone can do it.  If you are physically incapable of completing an obstacle (pacemaker?  no electric wires for you) then simply walk around it and keep going.  You will still earn your headband at the end.  Also, just like with Tough Guy, it's a team thing.  Even if you aren't running with a team of friends, other people on the course will help you if you ask!  At one point, I was sitting on top of one of the walls and my team was behind me and my arms were too shaky to control my drop down on the other side.  I had just bashed my knees on the previous wall because of this, so this time I shouted to some random guys that were already on the other side and asked if one of them would mind kind of catching me.  Sure, no problem!  The guy came over and grabbed my feet as I came down and helped support me to the ground.  Everest is another example: after the first wave of runners have arrived, the top of that obstacle will have people on it to catch whoever is next, whether they know that person or not.  The point is to help get other people through the course.  You do not need to be a super athlete to be able to proudly finish a Tough Mudder race.  Yes it's usually around 10 miles long, but you're not running straight through that.  Yes you have to climb over walls and ropes and things, but you can get a boost if you need it.  A small amount of physical preparation and a large amount of mental fortitude and positive attitude will get you to the finish.  Welcome to the obstacle course runner nation.

Photos by my parents.  Do not steal them.  Or borrow them.  Just leave them right where they are.
Email ThisBlogThis!Share to TwitterShare to FacebookShare to Pinterest
Labels: America, obstacles, running