Many many things in the world are built upon the written word.  Blogs, for one.  Race reviews, for another.  So it's rather embarrassing and frustrating as a writer to have to admit this, but here goes--

I am asked, "How was the trip?" or "How was the race?" or "How was Antarctica?" and a huge smile immediately blazes across my face, but all I can inadequately mumble is "Amazing!"  Followed by an awkward silence because clearly a longer, fuller response was expected, yet I'm at a loss for how to distill those 11 days into a few meager sentences.

And before someone tries to be smart and argue that a picture is worth a thousand words, let me just squash that myth right now as well.  Pictures are just as inadequate when Antarctica is your subject matter. 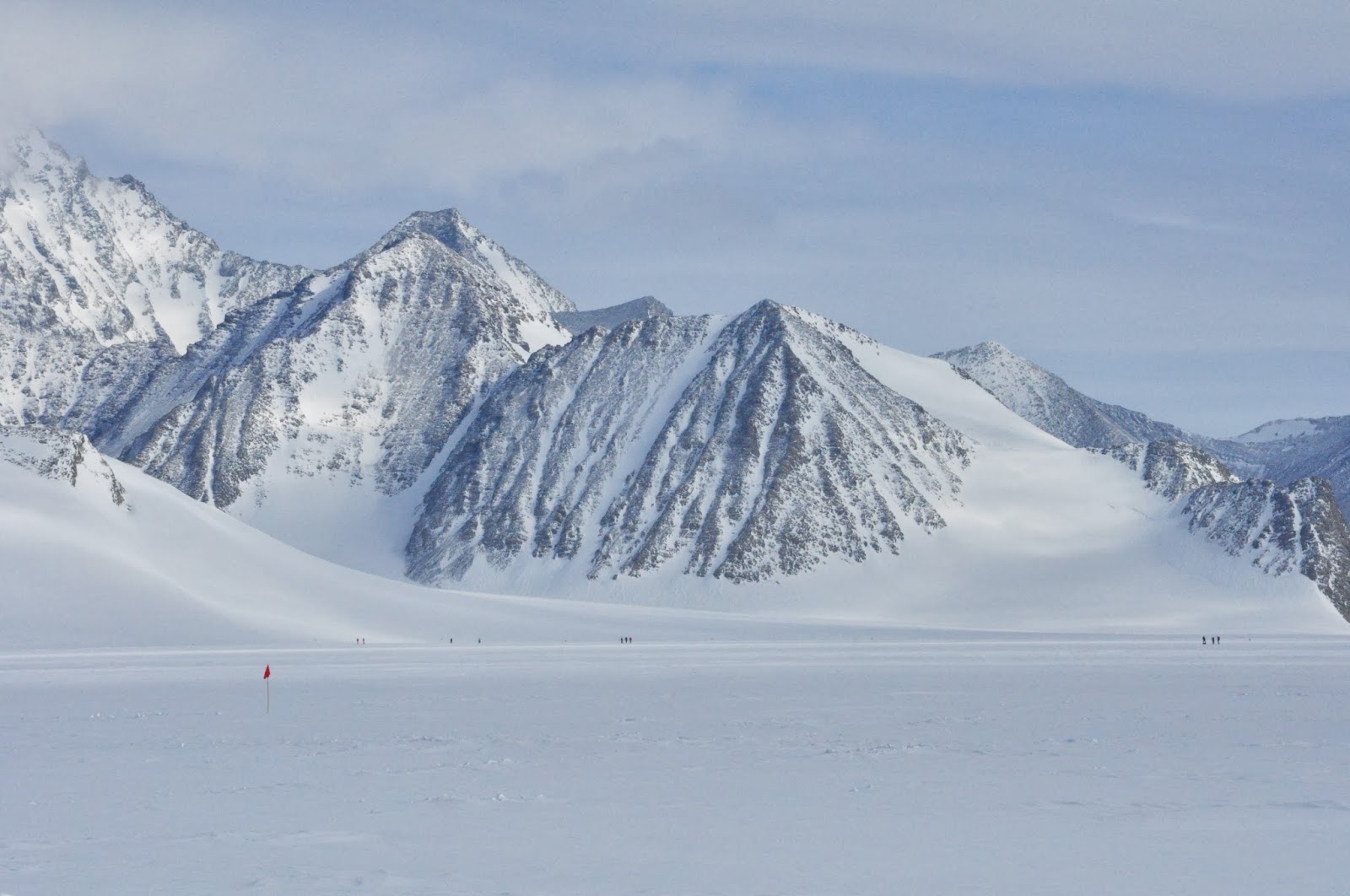 My brain is still trying to process my Antarctic experience.  I think most of my fellow runners are in the same boat, and our friends and family can't figure out why we don't know how to tell our stories and share our photos and help them vicariously enjoy what we experienced.  I'll probably be writing about Antarctica for the next month!  And not a thing I say will ever fully do justice to the adventure!

But, I have to start somewhere.  So we'll begin by taking a look at the event that precipitated this entire adventure for me: the marathon itself! 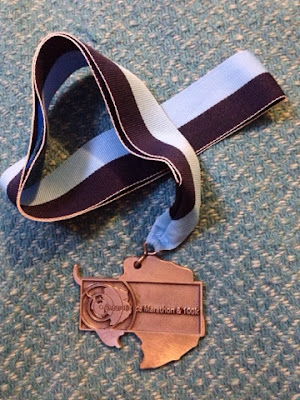 The Antarctic Ice Marathon is run on a half-marathon (13.1 miles, 21.1 km) circuit on Union Glacier in the Heritage Range of the Ellsworth Mountains, about 650 miles from the South Pole.  There is a horseshoe of mountains to the east, west, and south, and featureless white nothing to the north.  Union Glacier camp is the start, halfway point, and finish.  There are manned checkpoints at each of the far corners of the route with "restrooms", hot drinks, and snacks.  There is an unmanned emergency shelter with hot drinks and snacks halfway through the back stretch.  Cue my awesome sketch of the course:

We started the race around 10am on 20 November.  Unlike the day we arrived, which was bright and sunny and clear and perfect for photographs and great for general visibility, it was quite cloudy.  Cloudy in Antarctica means that the sky and the ground blur together, and you find yourself tripping as you walk because you cannot see the nuances in the snowy terrain over which your feet are traversing.  It's also a bit chillier without the sun.  I think the temperatures on race day were about -20 C.  But on the bright side, there was no wind!  I'll take pseudo-blind running over battling Katabatic winds any day. 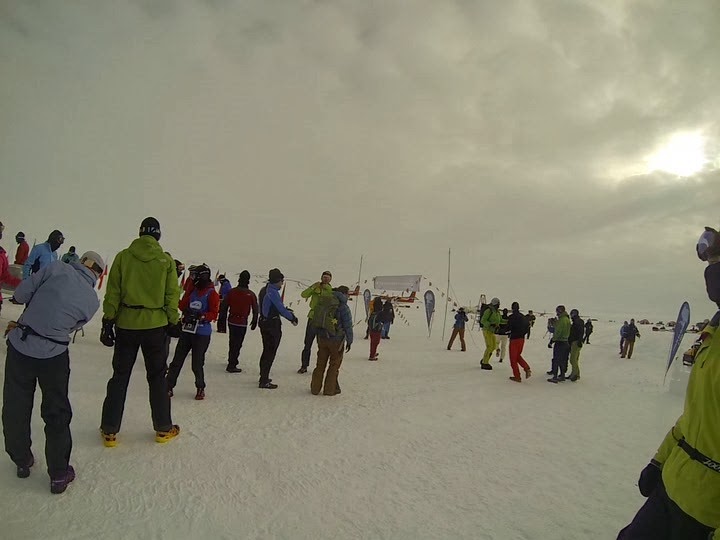 The first 5km of the race took us west out of camp towards the first checkpoint.  Everyone cheered and waved through the start and then settled down to try find their footing and figure out a pace and worry that their hands were never going to warm up.  We took the checkpoint by surprise by showing up en masse since there hadn't been enough time or distance for us to really spread out yet.  Snacks weren't set out and our bags of extra gear were still packed away and the bathroom wasn't even set up (I kind of had to cocoon myself into the tent canvas since it hadn't been attached to a frame, which was rather awkward .... great view out to the featureless northern plain though!), but they were prepared the second time around.  After Checkpoint One, the distances between runners really started to grow anyway. 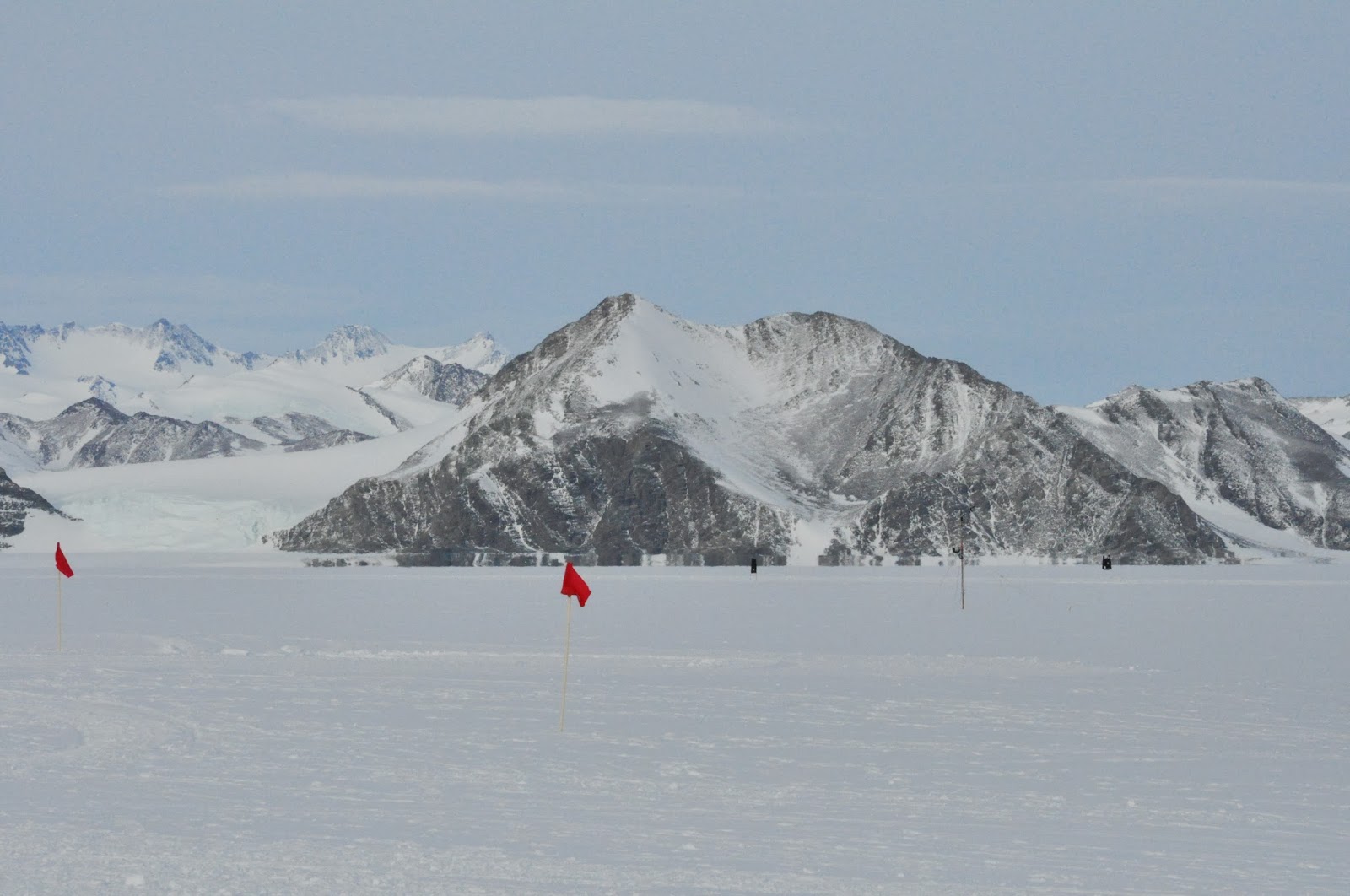 From Checkpoint One, we continued on into the longest segment of the course with mountains seemingly close on our right and more mountains looming ahead in the distance.  I was warmed up by this point, and the terrain in that section was the best on the entire course, so I felt great.  Although this is also when my goggles started to fog and freeze, leaving me with one little tunnel by my right eye to try to stay on track and enjoy the scenery.  The first bit went slightly uphill, which you didn't notice until you started going downhill and realized that you could see all the black flags marking the route to the second checkpoint, which was a speck of a van in the midst of the whiteness that NEVER GOT ANY CLOSER until suddenly it was right in front of you.  I'm telling you, perspective in Antarctica is bizarre.

From the van, aka Checkpoint Two, we ran straight into the wind for a mile-ish before turning back towards camp.  As far as breezes go, it was quite insignificant but still surprisingly chilling.  After rounding the corner back towards camp, the next landmark was the Christmas tree.  It's not a real tree, nor is it a fake tree in the conventional sense.  It's a wood and canvas construction and I don't know what it's for, other than marking a turn on the 10km course (used for the 100km race), but I think every single one of us on that marathon course loved that Christmas tree, because it meant we were one mile out.  Either one mile from halfway (and something hot and a change of clothes) or one mile from the FINISH. 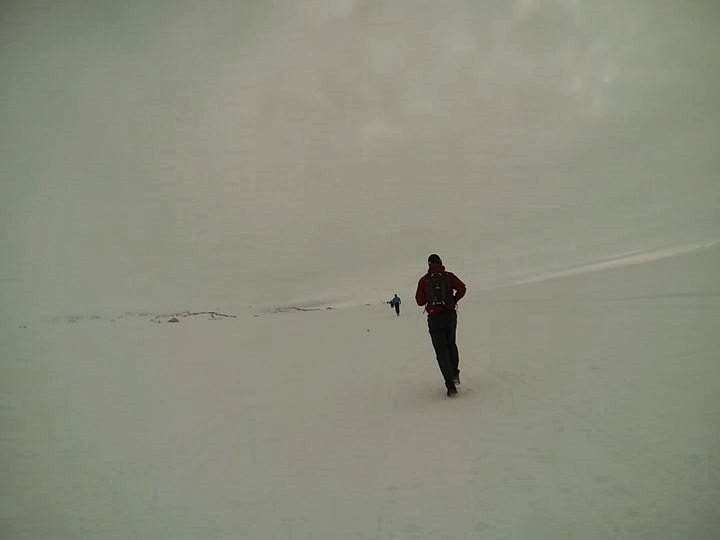 Since camp was the halfway point, you could pop into the main tent to grab some hot food and drink and even change clothes if you wanted.  I changed; I was a bit overdressed and sweated straight through everything.  (Gear discussions to come later....)  Everyone's favorite Antarctic saying: If you sweat, you die.  Being soggy is not a good thing in those temperatures, so a set of new clothes was a must. 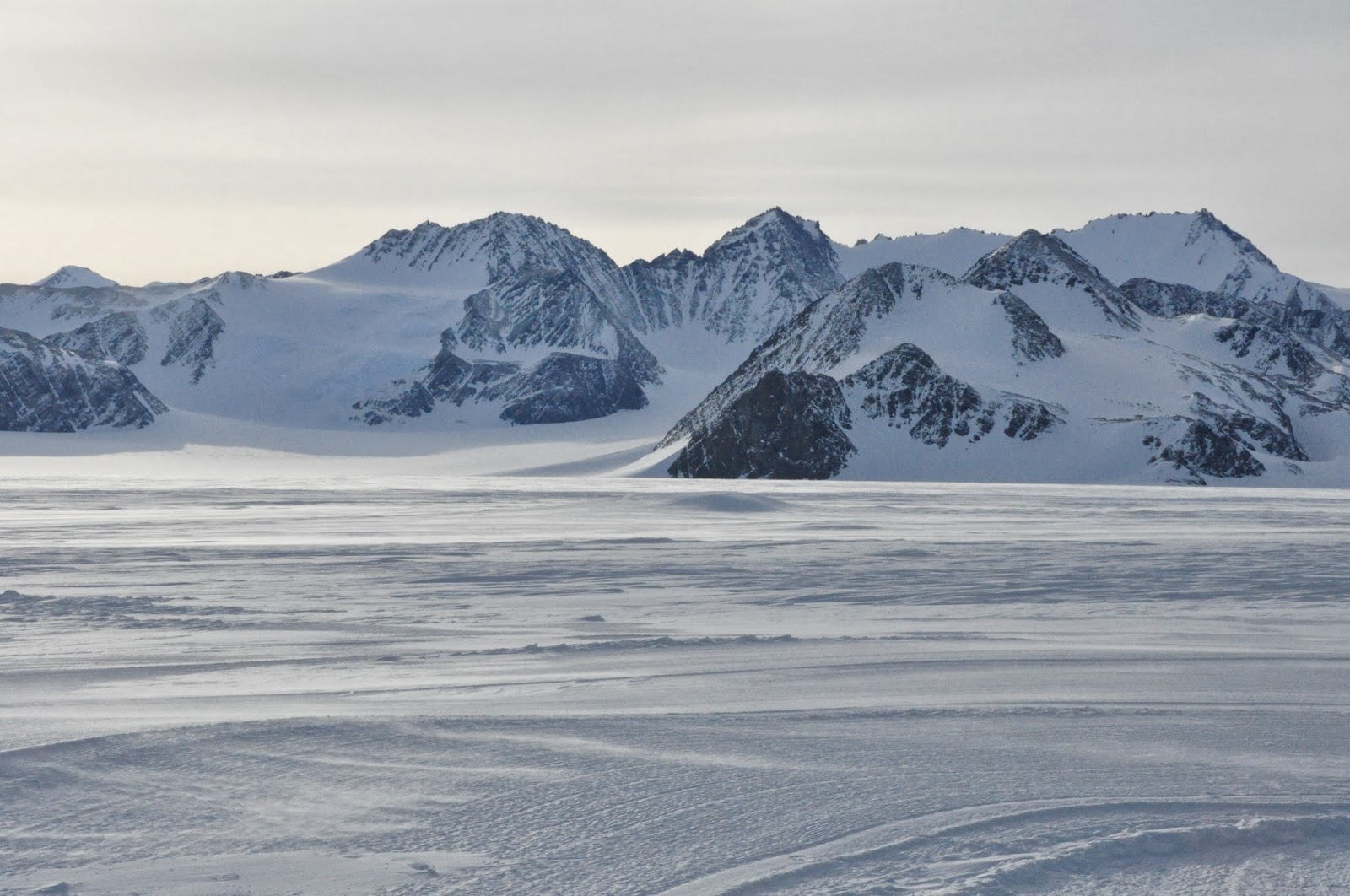 Once I was warm and dry with some hot water and a gel in my system, it was time to head off for the second dose!  I was all alone on the way in to Checkpoint One, which was very eerie with the great white nothing off to my right (north).  All I could hear was my breath trapped inside my face mask and the extremely loud crunching of my steps through the snow.  After Checkpoint One, I passed Santa Claus (he yelled Merry Christmas) and spent much of the back section leap-frogging with one of the other runners.  He eventually kicked into gear and became a little speck in the distance, which was okay with me because that was my favorite part of the run and I enjoyed the solitude.  Being alone out there was very cool.  Intimidating, but cool.

By the time I made it to Checkpoint Two for the second time, I was hurting.  Hips and knees were struggling with the slippery snow.  The bit between Checkpoint Two and camp was also the main road out to the runway, so counter-intuitively, it was the worst footing on the course.  You would think that constant use by vans and skidoos would tamp it down really well.  Alas.  I was pretty tired and worried that my knee was going to collapse before I made it to the finish, and it's a good thing I was alone as I approached the Christmas tree because I was cursing a blue streak at the snow.  It was the only mile where I was not enjoying myself! 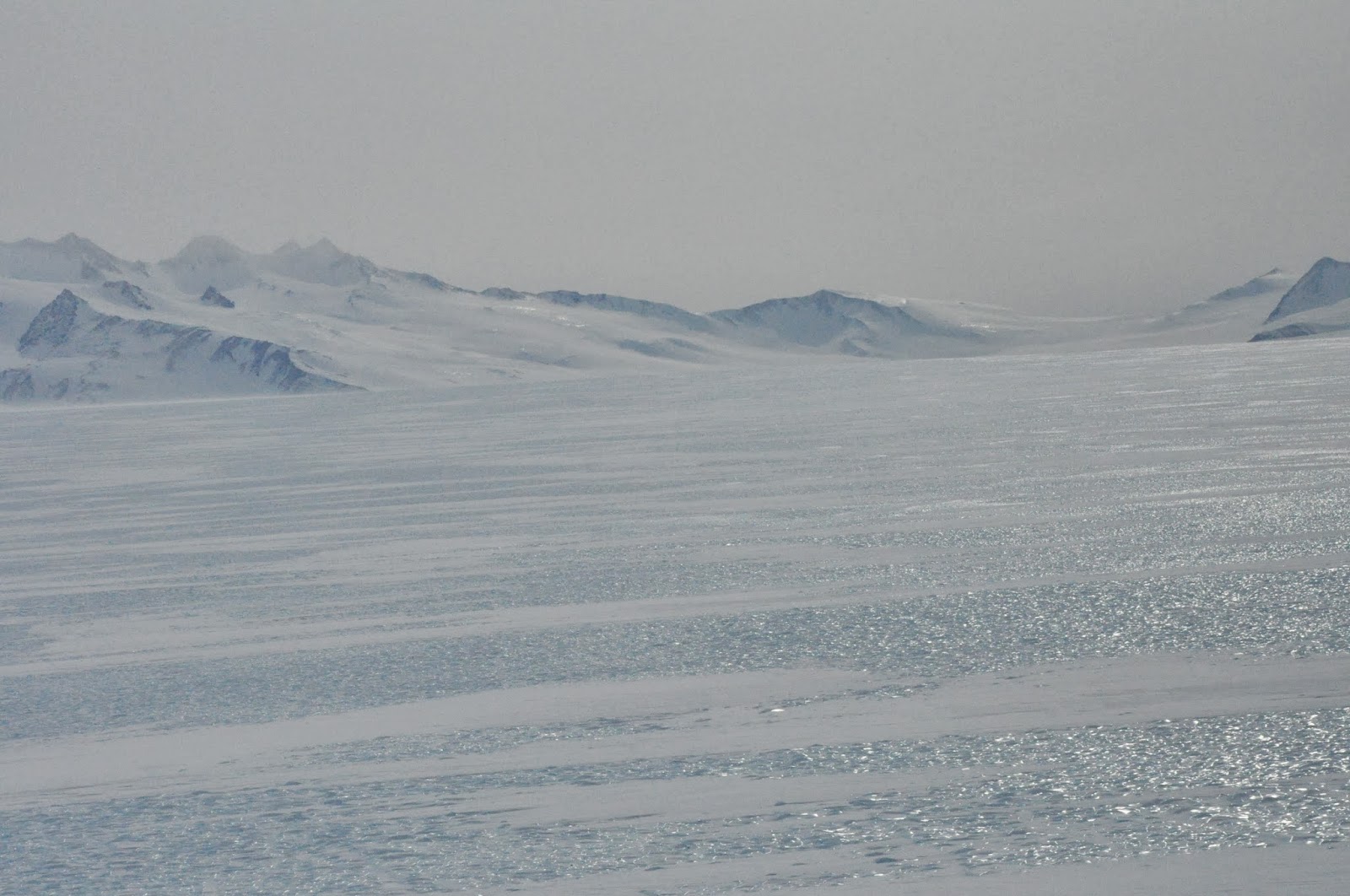 Thank heavens for that little fake tree.  One mile remaining, so off I went, trying to convince my knee that it was just fine and we were almost finished and if it would just stay together for another ten minutes it would all be over.  I ditched my face mask at this point too.  I had kept all my skin covered for the whole race, despite frozen-over goggles that really impeded my vision, because I was paranoid about frostbite.  It felt so good to get that soggy, frosty thing off my face and zoom across the finish line breathing normally.  I did zoom, too-- not particularly quickly, but with arms out like an airplane.  And a huge smile plastered across my face.

The Union Glacier staff did a fantastic job logistically with the marathon.  At each checkpoint, someone monitored a clipboard with all the runners listed, so they knew when we arrived at the checkpoint and when we departed.  They would then radio between checkpoints, so the next location knew who was inbound and knew to get worried if too much time went by and a runner hadn't arrived yet.  As runners cruised into the checkpoints, the staff asked what we needed and handed over cups of hot water and helped break apart pieces of chocolate or cookies that we couldn't manage with our mittened hands.  They constantly kept an eye out for white noses or any signs that the a runner was struggling with the cold.  They kept an air horn at the finish and blasted it when a runner was approaching so that people would be on hand to cheer but also ready to help get us into the warmth as quickly as possible.  They took the race as seriously as we did, and did a great job making it a smooth, enjoyable experience.

I don't really know what I was expecting, but my post-race pain was regular post-marathon types of cramps and aches.  Hate me if you must, but finishing the Antarctic Ice Marathon was not the hardest thing I've ever done.  YES the race was difficult, as evidenced by a time 1 hour and 45 minutes slower than normal races.  YES the slippery, uneven snow was a challenge.  YES it was weird to run swaddled in so many layers of clothing.  NO there is nothing familiar, ordinary, usual, or common about running a marathon in Antarctica! 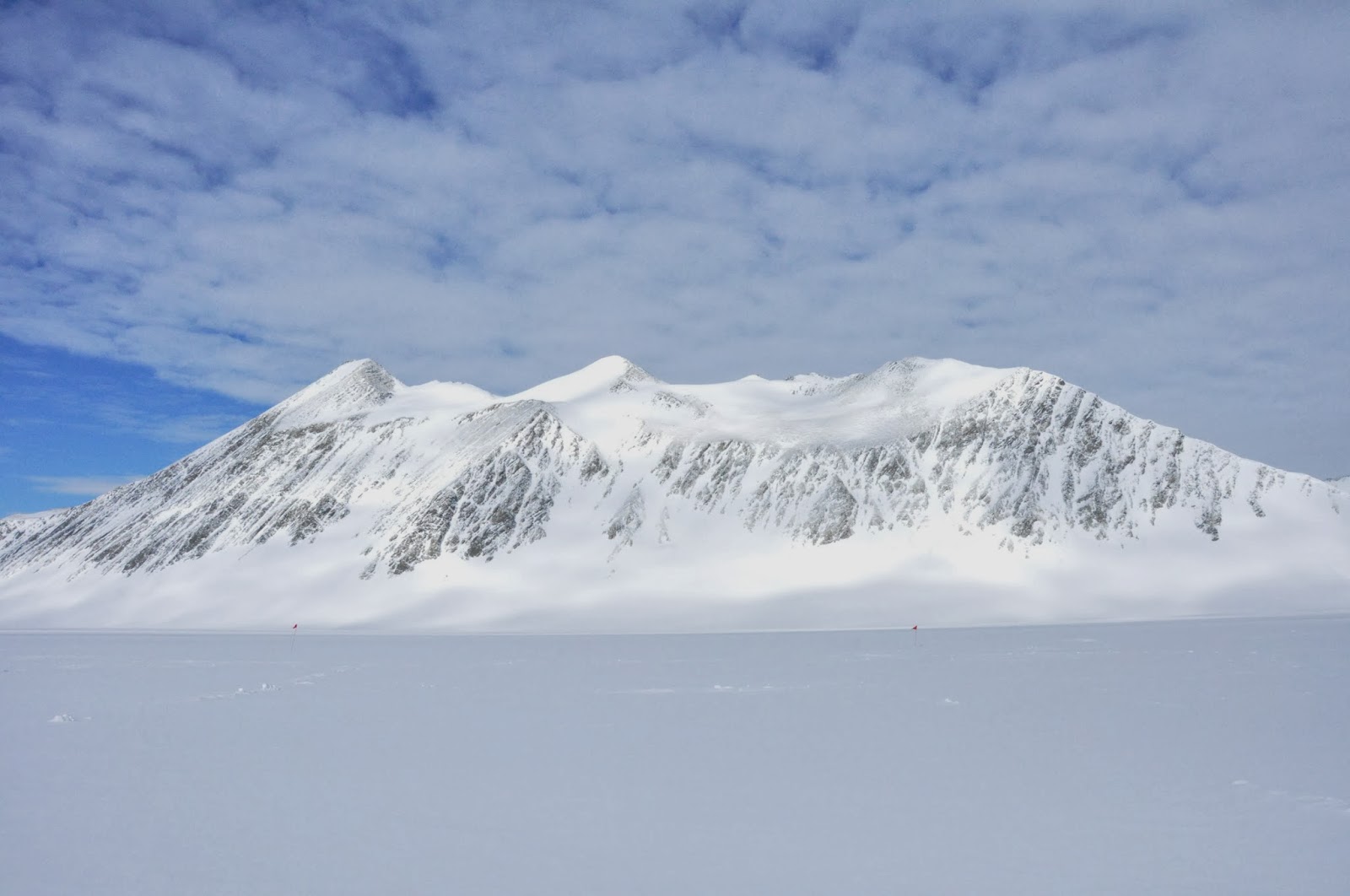 But minus that one mile spent cursing out loud because I hurt and the snow was not helping, the marathon was so much fun!  I loved being completely alone with my crunchy footsteps, feeling dwarfed and insignificant with icy mountains towering around and fields of ice and snow blurring away into the horizon.  Time does not exist when I run, but it was even easier to disappear into that weird void in Antarctica because there were no distractions.  No cheering crowds.  The approach of another runner sounded like an earthquake through the snow, and then they passed and became just another speck disappearing into the vastness of the glacier.  The scenery is too grand to change that drastically as you move through it.  For six hours, it was my breathing, my footfalls, and the swishing of my clothes for company.  Each step made so little impact against the great white nothing that it's hard to comprehend that I was running through the snow across the glacier for 26.2 miles.  The complaining from my joints and muscles and the passage of time on my watch face testified to the distance, but my brain still won't fathom it.  How do you wrap your mind around this?

This was an amazing race.  The location, the people, the coordination, the race itself.  A complete package of a mind-boggling, unforgettable experience.

I took all these photos, please do not kidnap them.
Email ThisBlogThis!Share to TwitterShare to FacebookShare to Pinterest
Labels: Antarctica, marathons, running