Will there be penguins?

I feel like I've become an official ambassador for the Antarctic Ice Marathon as I answer these and other questions over and over to different friends, family, coworkers, classmates, and other acquaintances that have found out about my upcoming adventure.  And of course the ironic thing is, I haven't been there yet!  Ask me again in December and you will get full details!

But in the meantime, I have gone through the marathon website over and over and also received a bunch of emails from Richard Donovan, the race coordinator, so at the very least right now I can tell you what I've read until I can tell you what I actually know from personal experience!  So let's tackle a few of these questions.

Yes, there are penguins in Antarctica.  No polar bears.  But I won't be seeing any wildlife because I'll be too far inland.  Our camp at Union Glacier is approximately 600 miles from the South Pole.  The critters stick to the coast.

The Antarctic Ice marathoners and ultra runners convene in Punta Arenas, Chile.  To get to Union Glacier, we fly in an Ilyushin-76 (IL-76), which is a Russian cargo plane.  No, it does not land on skis, although that would have been awesome.  It's got regular tires because it lands on an ice runway that is regularly maintained by the base camp crew.  The flight from Punta Arenas to Union Glacier is about 4.5 hours and we will fly over some amazing terrain, including Tierra del Fuego and the Ellsworth Mountains.

It will be COLD.  Temperatures are averaging around -15 C this week.  The trick is when the winds pick up.  It is entirely possible we will run the entire marathon through 25 knot winds.  Brrrr!

Despite this, it's surprising how seemingly little we need to wear to stay toasty during the race.  I've been obsessing over the required gear for ages and ages now.  I will give detailed feedback on how my selections fare during the marathon, so check back for that in a few weeks! 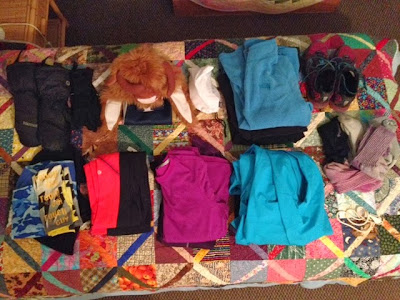 There are three checkpoints along the race course (it's a loop that we run twice) and each checkpoint is manned by folks who will make sure we're doing okay and not getting hypothermic.  They keep snacks and drinks at each checkpoint.  I remember somewhere reading about soup, but otherwise it sounds like regular race nourishment!

We sleep in tents.  Yes, tents!!  But supposedly the tent interiors can get as warm as 20 C (almost 70 F) because the sun never sets.  Plus we have roasty toasty polar sleeping bags.  The tents are based on a design that Shackleton's expedition used.  Union Glacier camp also has a dining tent, which is the only heated area.  I suspect we'll be spending most of our time there when we're not sleeping or running races.

And of course, there's the question of toilets, which isn't the first thing that leaps into most people's thoughts but is definitely a big consideration in Antarctica where things can't biodegrade.  There is one men's and one women's toilet (hence the recommendation to bring a pee bottle for midnight requirements), and each has separate urinals for peeing and pooping because the disposal requirements for each type of waste vary.  Everything is transported back to Chile for disposal.  Considering the strict requirements for toilets, it should come as no surprise that there are no shower facilities.  You can sponge bathe with a thermos of hot water in your tent, but most people just bring baby wipes and suck it up for a few days.  You don't really notice if you smell when everyone else smells too, eh?  ;)

Anything else you're wondering about?  I'll do my best to answer before I go, but otherwise this is the last you'll hear from me for a few weeks!  Race updates will be posted on the Antarctic Ice Marathon's Facebook page, and results will be released to global news networks after we return from the white continent.  Keep thinking warm thoughts!
Email ThisBlogThis!Share to TwitterShare to FacebookShare to Pinterest
Labels: Antarctica