A Gallon's Worth of Awesome Pubs in Boston

I am ashamed of myself.

This blog is over a year old and I haven't written a single post about the best city on America's east coast.  NO not NYC, I'm talking about BOSTON!  With St Patrick's Day looming on the horizon, it's the perfect time to start ... with a tour through some of my favorite pubs around the city.

I wish could tell you exactly how many pubs are in Boston, and the immediately surrounding cities that aren't technically Boston (I'm looking at you, Cambridge and Somerville), but I'm finding this statistic rather elusive.  Suffice it to say, this nightlife scene is extensive and fantastic.  (To provide a baseline, here's a map with a pin for every pub/bar that's been graced by my presence at some time or another.)  Irish pubs dominate, but there are loads of places that don't have a specific affiliation and definitely do not qualify as bars.  Pubs have a different (better) vibe.  I love them.  All of them.

BUT I have narrowed down some favorites so you won't be overwhelmed by the selection!

McGanns!!  This is my absolutely favorite pub out of the four city blocks full of options near the Garden.  And it's in my top three for the entire city.  It's one giant room with a few alcoves carved into the walls, including the best table in the house which is hidden behind the bar.  The décor is a mixture of authentic Irish and photographs of local hot-shots (politicians, sports, musicians, etc).  The food is delicious (steak tips!) and I have it on good authority that they make the best Bloody Mary in Boston.  McGanns is always packed with pre-game and post-game crowds on game days for the Celtics and Bruins, but my favorite crowds are on weekend mornings when Gaelic football, hurling, and rugby matches are broadcasting.  If you simply do not comprehend Gaelic football, go to McGanns during playoffs and I guarantee you will find a friendly Irishman who will turn you into a die-hard fan by the end of the match!  I'm not joking when I say morning either; although advertised opening time on the weekend is noon, McGanns will be hopping much earlier than that if there's a match on TV!  And while you're there, say hi to Bartender Mike!

A half a mile away from TD Garden is the pub mecca known as Union Street.  With the exception of Union Oyster House, which is more of a restaurant than anything else, and Saus, which is a fantastic Belgian-waffle-poutine eatery, the entire street is pubs and bars!  Heck, when one of the pubs closed in 2012 after over 30 years of business, they didn't just shutter their windows ... they held a WAKE.  For the closing of a PUB.  Union Street means business.  With SO MANY AWESOME OPTIONS, such as the oldest tavern in America (The Bell in Hand) or the starting point for Paul Revere's famous ride (by which I mean the original Green Dragon is where the British plans were overheard, which prompted Paul and Billy to hit the road), I am naturally going to send you down a back alley to a quirky little place with no historical significance whatsoever: Durty Nelly's.  This odd little pub is accessible from their main entrance on Blackstone Street or the entrance on the alley behind The Green Dragon.  There's a second floor dining area, but I prefer the pub room into which you step when you enter, because that's where all the character is!  It's a single room barely bigger than the length of the bar, with an additional table tucked into the back corner.  The walls are decorated with old photographs, and the bar is often decorated with hilarious locals.  They serve some basic appetizer-type dishes, but its mostly a great place to stop for a pint or two and some people-watching. 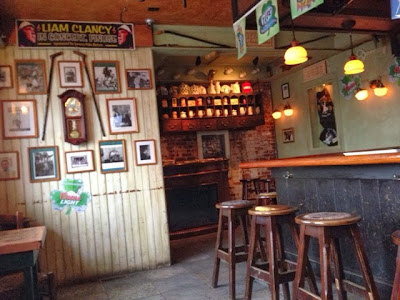 A block away from Union Street is the tourist hot-spot of Faneuil Hall/Quincy Market with buskers, shopping, and heaps of delicious food.  And, of course, more pubs!  This is where you'll find another of my top three in the entire city: The Black Rose.  I believe I associate more epic nights with this pub than any other place in Boston-- one fantastic New Year's Eve, the longest work happy hour in which I've ever participated, two ridiculous birthday nights, and one barn-burner of a St Patrick's Day.  And countless other visits that didn't involve nearly as many pints and madness!  Black Rose has lots of space with two stories and a bar on each, but it gets packed.  Usually, the staff will not let you sit at a table unless you're ordering food.  (The food is delicious, but it is possible to talk your way around this silly requirement if you aren't interested in eating.)  Of the pubs we've discussed thus far, this is the most traditionally Irish, from the clan banners adorning the walls to the Gaelic translation of the name outside.  And best of all is the live music!  Every night of the week!  I believe more than two ensembles rotate through The Black Rose, but every single one of my visits has featured either The McTeggarts or Celtic Clan.  They play traditional Irish tunes and jigs and reels, as well as more contemporary things like Johnny Cash and U2, and half the dining area will end up in front of the stage dancing.  A great time is guaranteed when you go to The Black Rose.

A quarter of a mile away from The Black Rose, in the bizzaro world of glass skyscrapers that is the Financial District of Boston, you will find another cozy place (there's a theme here with me and tiny pubs) aptly named The Littlest Bar.  It's not as small as Durty Nelly's, but 'little' is still appropriate.  Aside from the bar offerings, this place also has one (two?) Draft Masters, which let you pour your own pint right at your table!  The overall ambiance is very relaxed and welcoming, but my favorite thing about this place is the food.  Especially the macaroni and cheese.  Actually, that sums up the two reasons I love The Littlest Bar: it's cute-n-cozy and the mac-n-cheese is phenomenal.  The end.

I feel like the Seaport generally has more restaurants than bars, but that's okay because there is one superb place which would dominate the competition anyway, even though there isn't any.  The Whiskey Priest is next door to the World Trade Center and sits right on the water.  Literally, ON the water ... it's kind of on a dock that juts out into the harbor.  In summer, the windows accordion away so that the first floor of the pub is wide open, and they also have a rooftop deck.  Good food, good drinks (make sure you know the proper pronunciation of Smithwicks or the bartender will correct you), and good dancing at night.

Now let us venture further afield and go north of the Charles River!

There is no contest here.  The Warren Tavern is historically significant, serves amazing food, sits in a really cool area of the city, and has a uniquely wonderful ambiance.  It's a hot spot to catch any of Boston's sports teams on TV, but also a great place for a nice dinner on a non-sports night.  There are two dining areas somewhat separated from the main area of the pub, which has a dark, brooding atmosphere from all the ancient wood beams and paneling.  I also keep a special place in my heart for the Warren Tavern because it is responsible for introducing me to Shipyard Applehead, quite possibly my favorite beer that isn't pumpkin-based.

There are a lot of cool places around Harvard Square, which is unsurprising since the university is right there, which translates to heaps of students and their associated drinking habits.  My friends will probably be surprised that I'm not recommending John Harvard's, since I do love them and their lobster mac (clearly I need to write a post about where to eat mac-n-cheese in Boston), but my favorite place in the area is actually Grendel's Den.  Cool name, eh?  It's a quirky basement place that does have a very den-like cavey atmosphere.  They have good drinks, good food, and the best part is that you're allowed to have your dog with you if you sit at the outdoor patio!  Boston is a fairly dog-friendly city until it comes to eating.  So Grendel's immediately went to the top of my list for welcoming my pup.

Davis Square is yet another hub of the city, full of hustle and bustle and great food options, that also manages to have a small-town feel.  I'd argue that it's the heart of Somerville (I like Davis better than Porter, and you can't get to Union on the T) and it really does feel like you're on Main Street of a town, because the surrounding area is neighborhoods that merge into the grounds of Tufts and Harvard Universities.  There is a movie theater, shopping, an awesome candlepin bowling place with a flatbread pizza restaurant attached, a delicious BBQ restaurant, amazing brunch options, and the pub that rounds out my top three for Boston: The Burren.  With impeccable timing, my friend Hannah informed me earlier this week that The Burren has made it into the Top 21 Pubs in America, according to The Thrillist.  Huzzah, validation for my seemingly-arbitrary preferences!!  Anyway, The Burren is everything you expect from an Irish pub.  It's got the atmosphere, it's got the food, and its definitely got the music.  Some remarkably big names participate in performances there, especially as part of The Backroom Series, and there's something going on pretty much any evening you stop by.  And a final great thing about The Burren-- they host a weekly 5k Bur-run on Mondays!  You can store your things in the pub, go for a jaunt, and recover afterwards with a pint and a tasty meal.

After you stop by the Sam Adams Brewery for your quick tour and beer sampling session, you must go to Doyle's.  Sam Adams actually makes this very easy by providing a party trolley to take you there!  The trolley runs Fridays, Saturdays, and Mondays.  Doyle's is massive, and every inch oozes character, from the paintings and photographs on the walls to the well-worn wooden furnishings.  The pub featured in the movie Mystic River too.  And a bonus if you go to the pub after visiting the brewery is that you get to keep your first Sam Adams pint glass as a souvenir.

Ta-da!  There you have your eight pints + one of glorious pub options in Boston!  To hopefully make it easier for you to find them, here's a map.  Slainte!
Email ThisBlogThis!Share to TwitterShare to FacebookShare to Pinterest
Labels: America, Boston, food