I wonder who was the first human to observe a creature in flight and wish they too had that amazing gift.  Flight is an obsession we've had for centuries, both in other creatures and for ourselves.  How many animal mash-ups were made even more exotic through the addition of a pair of wings?  (Gryphon!  Hippogriff!  Harpy!)  We even stick wings on regular creatures (Pegasus!) and give them magical powers to defy every law of physics (Rudolph and team!) to make them special.

Then there's the history of attempts to give humans wings.  Think how far we've come!  From the story of Icarus to the wacky efforts by various people to glue feathers on themselves or strap wings to their arms and jump off something tall to man-carrying kites to hot air balloons to gliders to the Wright Brothers to the fighter jets and passenger airlines of today to base jumping and wingsuits.  We are a tenacious and creative lot when it comes to achieving the dream of flying!

I wouldn't say that I've ever been overly obsessed with flying, but I definitely have a penchant for high places because of the amazing views that usually come with them.  This is why I climb mountains, run to the top of monuments and tall buildings to see a city, always try to get a window seat when traveling, jump out of perfectly good airplanes, fling myself headfirst into thin air with a giant rubber band attached to my ankles ... okay, maybe there is a small flight obsession here.  So it's not so crazy that last summer (2013) I took the opportunity to experience a whole new high point and method of flight by HANG GLIDING! 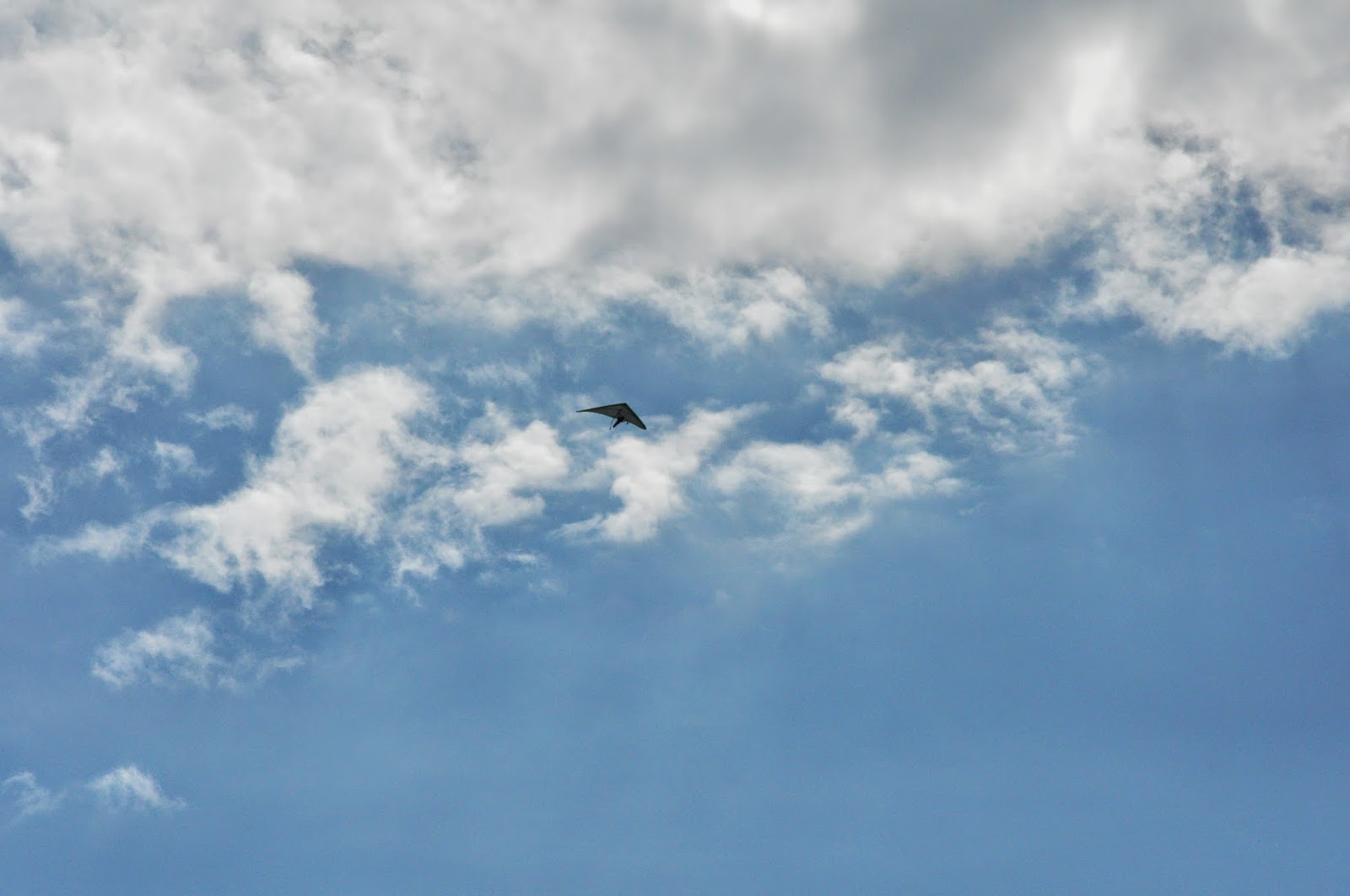 Hang gliding must not be an overly popular flight sport since there's only one place in all of New England where you can try it.  Fortunately, Morningside Flight Park is in southern New Hampshire, so it's convenient for most New Englanders unless you live in central/northern Maine.  (But you guys have rafting and plenty of other adventures, so hakuna matata.)

In typical New Hampshire fashion, everyone at the flight park is very chill.  We watched new paragliders leap-fly their way down a nearby mountain slope until our hang gliding instructor was ready for us.  I swear his name was Mark.  He shall be Mark for the rest of this story.  Fun fact ... to be permitted by the Federal Aviation Administration (FAA) to enter U.S. airspace in a tandem hang glider, you have to be a flight student, which means signing up for a one-year temporary membership with the United States Hang Gliding and Paragliding Association is part of the deal!  Once that paperwork and death waivers and the like were signed, we trekked down to the grass strip where the ultralight and the glider were waiting.  I have to admit, I was way more interested in the ultralight than the glider.  I mean, a hang glider is a boomerang-shaped canvas wing with some poles strapped around on it.  Not much there.  But an ultralight is an airplane skeleton!  It's like peeling back the skin and seeing how all the veins and muscles and bones work together!  ......  Gross; apologies for the graphic comparison, but it's true.  I think it would be so much fun to fly!  I digress--back to hang gliding, since that was the whole point of this adventure. 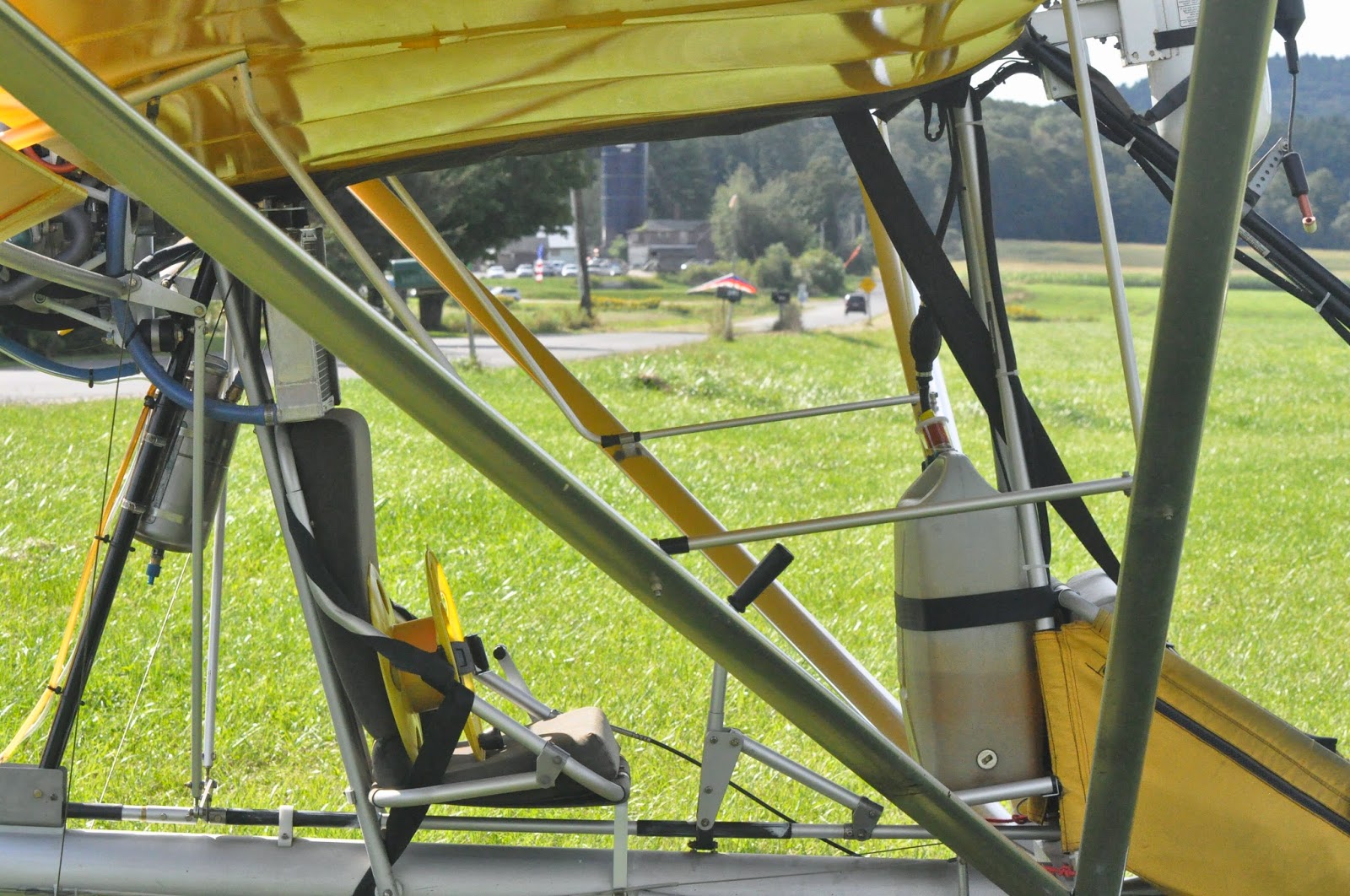 The first step was to strap into the harness which suspended me from the wing of the glider.  It's basically like a long apron that goes over your shoulders and hangs down to your ankles, and it supports all of your weight when it's clipped in.  I, the student, was suspended slightly above and to the left of Mark, who was a shade closer to the control bar because he had to drive.  His rig had two straps on it for me to use as hand-holds, since I wasn't allowed to touch the control bar.  After a very short safety briefing, the pilot fired up the ultralight and taxied out in front of us until the tow line was stretched out so we could make sure it wasn't knotted and there were no tangles.  Then Mark waved his hands around with some pre-determined signals to communicate with the ultralight pilot and we were off!  A slight tug to establish contact through the tow line and the ultralight dragged us down the grass runway and into the air.  In fact, we were airborne before the ultralight! Over the course of the next five minutes, the ultralight took us up to a height of about 2000 feet.  All we had to do was lay in our harnesses and enjoy the beautiful scenery of the Connecticut River Valley and surrounding mountains, including Mount Monadnock, as well as the lovely grey storm clouds that were starting to pile up to the west.

At 2000 feet, Mark unclipped the tow and the ultralight pilot returned to the strip.  He didn't just fly down and land though; he cut off his engine and literally nose-dived the ultralight back to the ground.  One second he was straight in front of us; the next second I was craning my neck to find him below us.  THAT would have been a stomach-flipping experience! 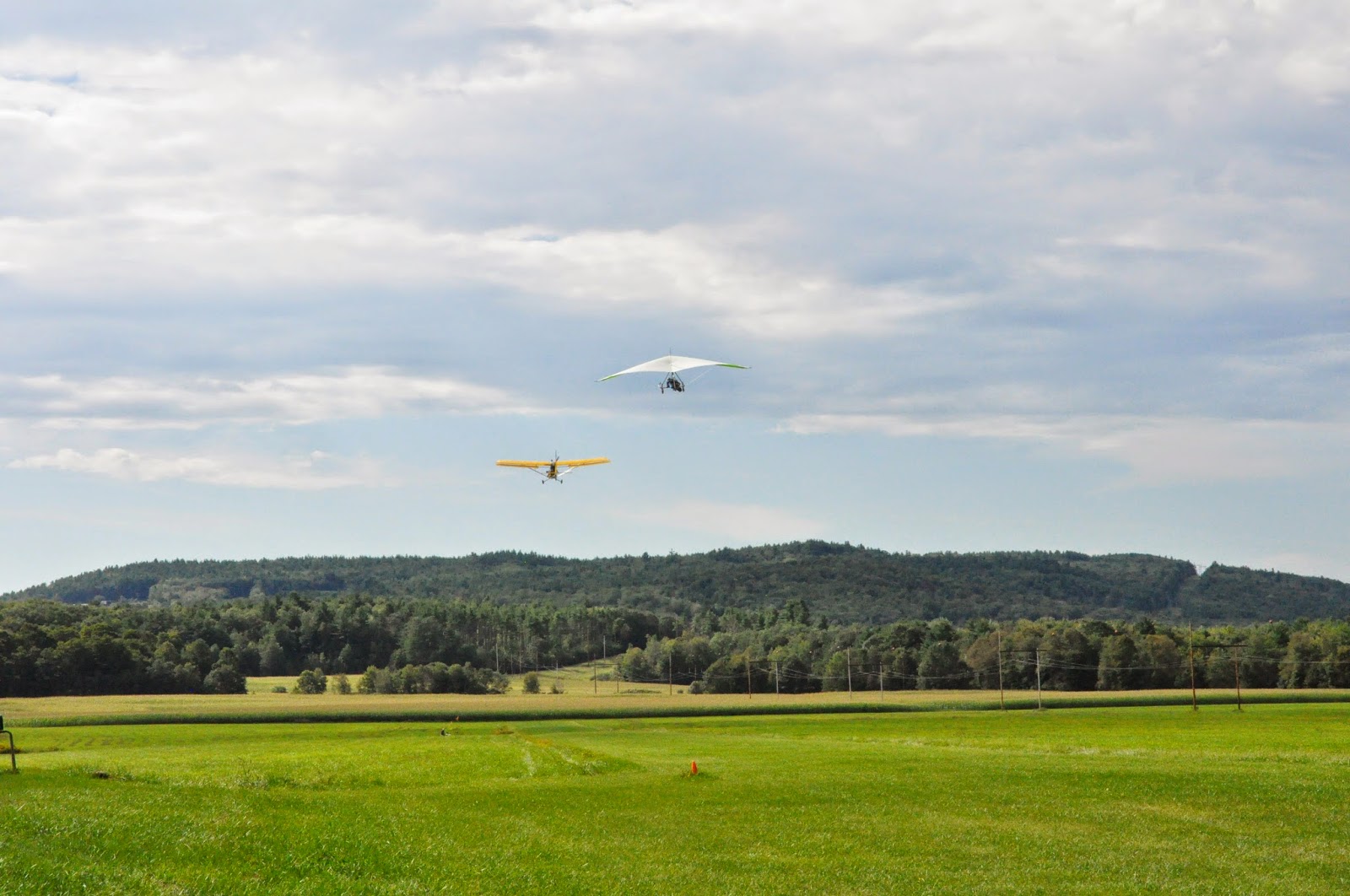 Hang gliding, on the other hand, is remarkably peaceful.  You know when you look up into the sky on a clear blue summer day and see raptors with their wings spread but not moving a muscle as they drift lazily in circles?  That is exactly what we did.  Laying on my belly suspended from a colorful piece of fabric 2000 feet up in the air was probably the closest I will ever come to knowing what it's like to be a bird.  Their viewpoint of the world certainly is amazing, and I would love to have wings to enjoy it whenever I like.  Also, it's really quiet up there.  No cars, no voices, no rustling leaves, no rushing water, no anything.  The only thing the wind touches is you. 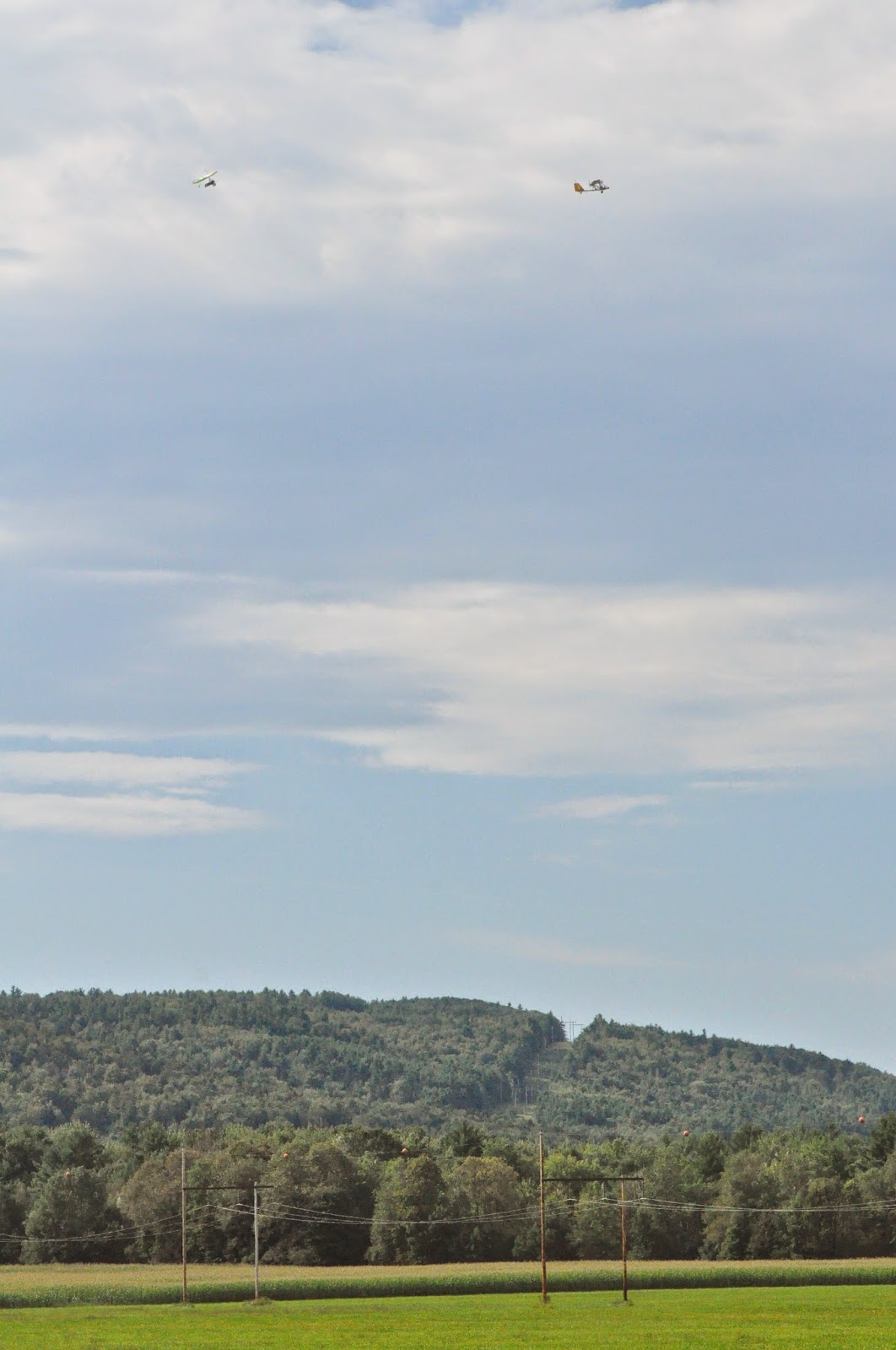 With the slightest pressure on the control bar, Mark kept us in a slowly-descending spiral over the flight park.  I got to take over for a few minutes, and as always, I was surprised at how little muscle is required to get a response from the aircraft.  Slight lean to the right and the glider curves left, slight lean forward and the glider speeds up.  Slight lean to the left and the glider goes right, ease backwards and she slows.  Easy!  Awesome!  We tried to "buzz" the control tower for the paragliders, but despite my three minutes of expert steering, I definitely did not have enough experience or feel for the glider to get it to find such a small target.  Lesson reinforced: the basic concepts are easy to grasp, but as always, a lot more training is required to really make it look easy.

Mark took over the controls again for the landing, which was the most exciting part of the entire flight.  We executed a sharp turn with a marked altitude drop and approached the grass airstrip at a fairly high speed, which meant we were leaning out over the control bar like gymnasts as we zoomed towards the ground.  Then we were rattling along until the grass killed the glider's momentum, I awkwardly used Mark like a tree to stand up in my harness and unclip from the wing, and the flight was over! 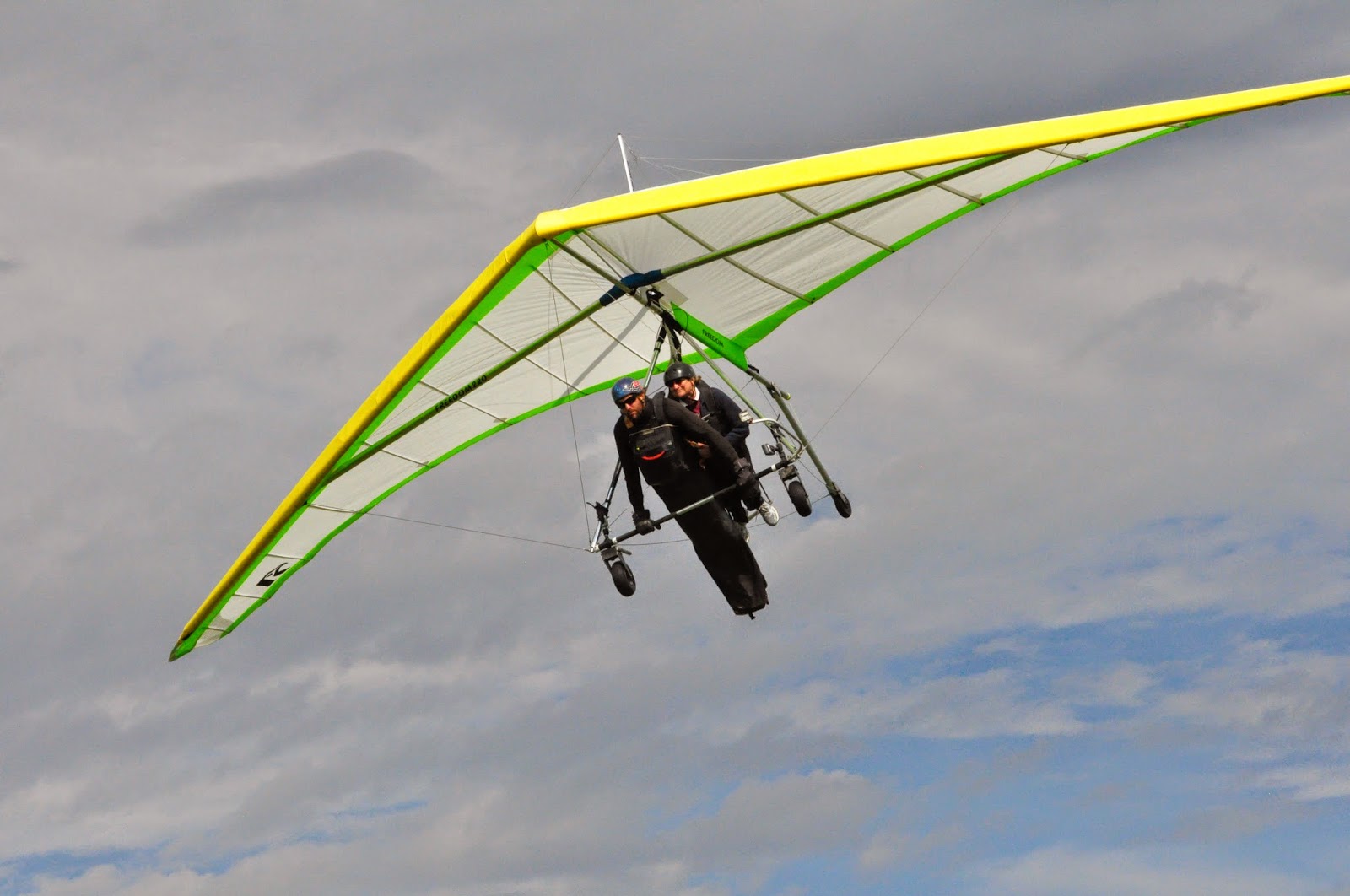 I think I expected hang gliding to be similar to hot air ballooning, but it's very different because you're flying into the wind instead of letting it move you, and it's significantly quieter because there is no burner periodically roaring to life.  Hang gliding might be the perfect step for someone who is terrified of flying to find their wings (ha ha).  It's smooth and steady for those who don't like roller coaster sensations, it's quiet for those who are daunted by growling engines, it feels quite secure because of the harness, and everything about the ride is enjoyable.  Instead of an adrenaline-charged, white-knuckled adventure, hang gliding is a window into the grace and peace of flying.  For those precious minutes, you own the sky and you know what it would be like to touch wingtips with an eagle. 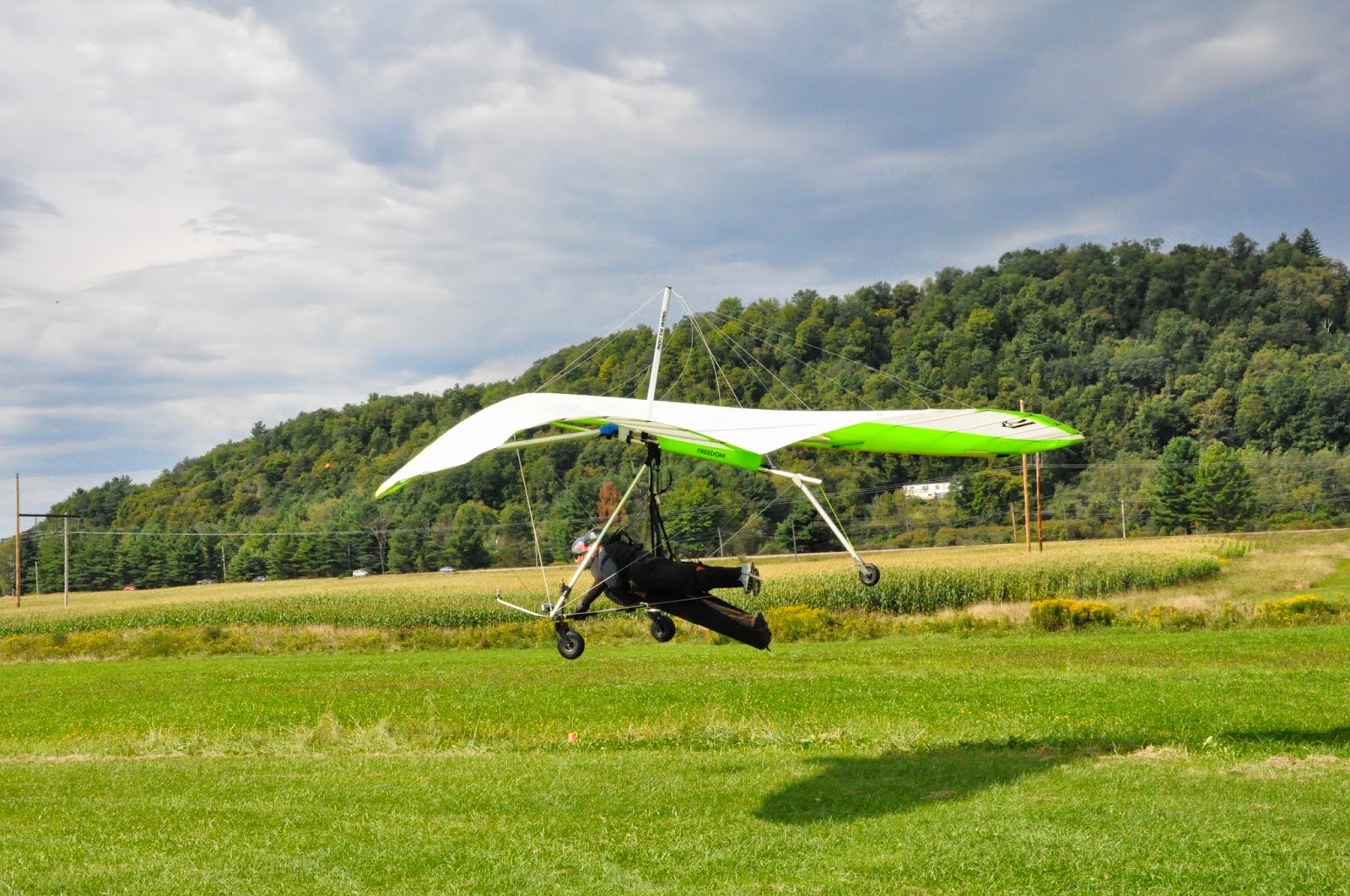 Practical Tips
- Wear sunglasses, even if its cloudy!!  Otherwise your eyes will be watering from the wind and you won't get to enjoy the view.
- Wear covered shoes, pants, and at least a long sleeved shirt (I was thankful for an additional windbreaker on top of that).  Even if its warm on the ground, its cooler in the air and the wind doesn't help. 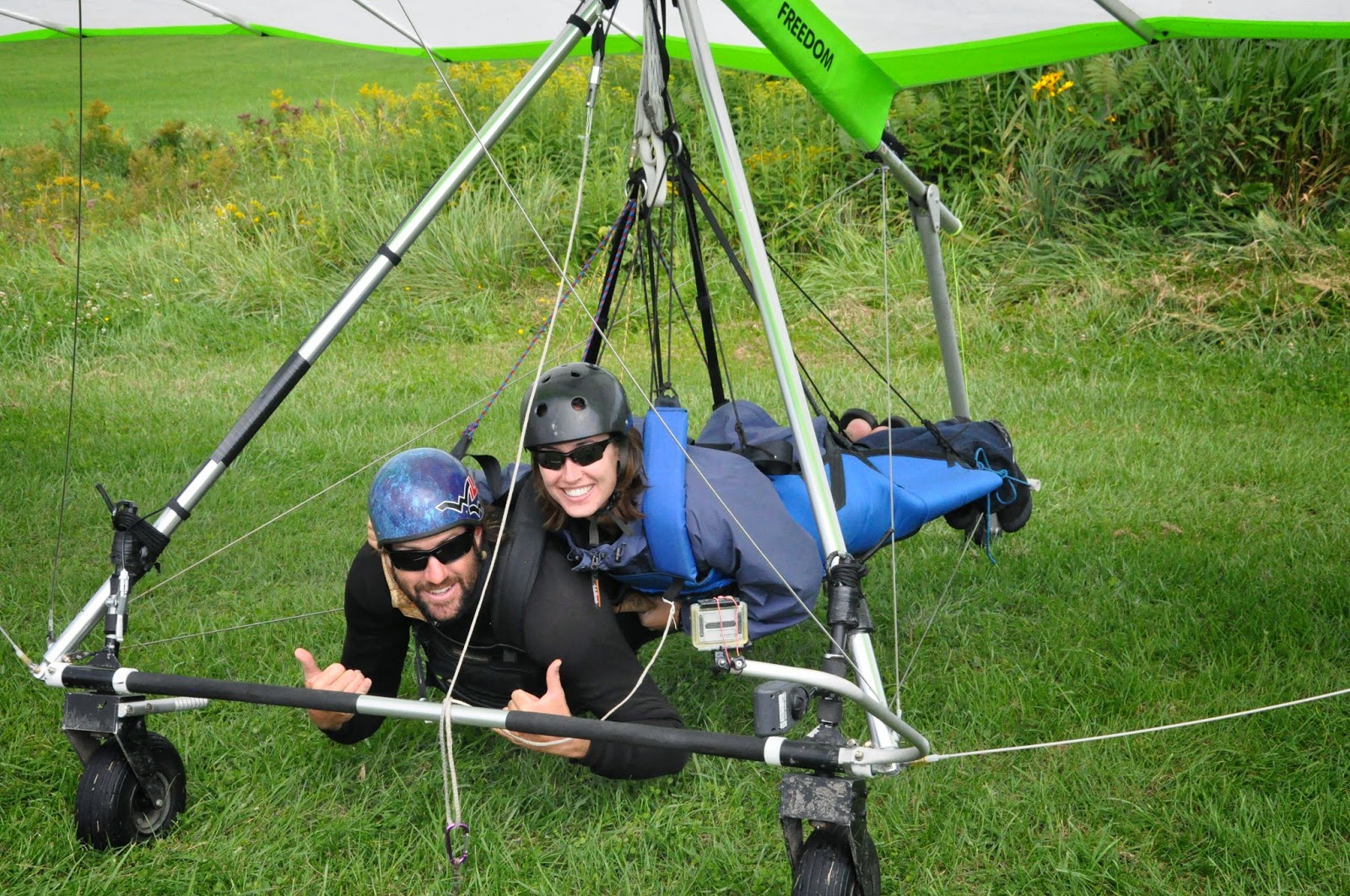 As ever and always, please enjoy my photos but don't steal them.
Email ThisBlogThis!Share to TwitterShare to FacebookShare to Pinterest
Labels: adventures, America