Three-day weekends are for adventures.  I can sleep and hang out and watch movies on regular weekends; that third day offers a chance to go further afield and explore places that are normally just slightly out of reach.

One year after the most challenging hike of my life (at least up until that point), I found myself facing a three-day weekend with zero plans.  Even worse, my regular adventure buddies had moved on and I was tired of trying to convince new people that my adventures are NOT insane, they are FUN. 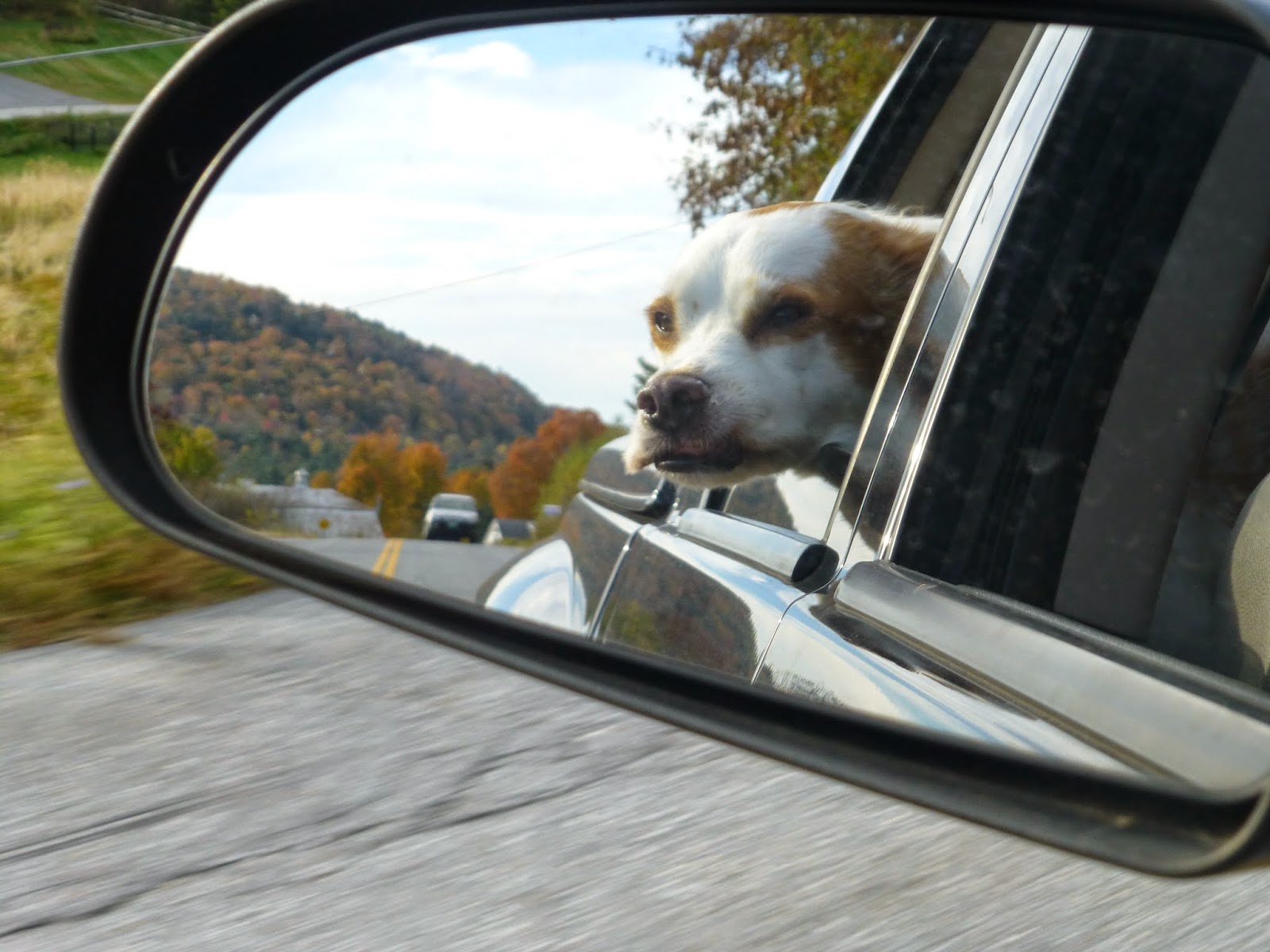 So, in typical form (read: on a complete whim), I threw a tent and a sleeping bag in my truck, grabbed the pup, and headed out to see if I could survive my first solo camping trip AND first solo significant hike!

Pups and I spent the night at Underhill State Park, which is conveniently located partway up the western slopes of Mount Mansfield, our target for the next day's hike.  Mount Mansfield is the tallest mountain in Vermont at 4393 feet.  (Although according to my watch, the summit was 4446 feet.)  Supposedly from one particular perspective, the mountain looks like a human face.  Because of this, the mountain's prominent features are named the Adam's Apple, Chin, Nose, and Forehead. 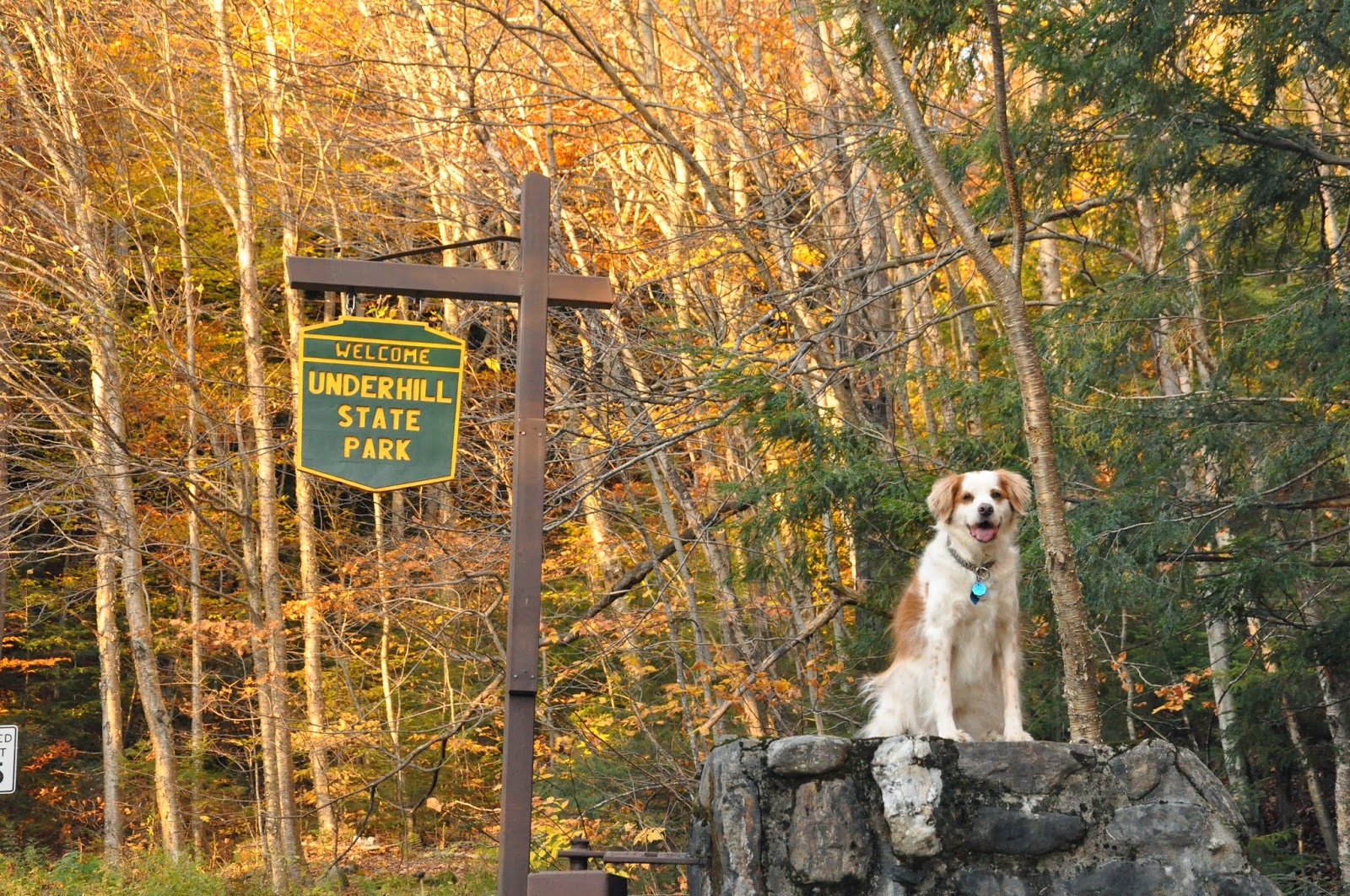 The Underhill campground was amazing with the fall foliage.  Gold was the primary color, and the setting sun made the forest look absolutely magical.  We set up our site and walked around for a while soaking in the colors until true dusk settled into the woods.  Then it was campfire time!  Solo camping was a great success: I managed to set up my tent which I hadn't used in six years AND I successfully started a fire to roast hot dogs and potatoes for dinner.  The campground at Underhill is very nice, with several different sites tucked away into the woods around the main cabin manned by park staff.  There are toilets and sinks, but no showers.  And obviously they accept dogs, which is the most important part! 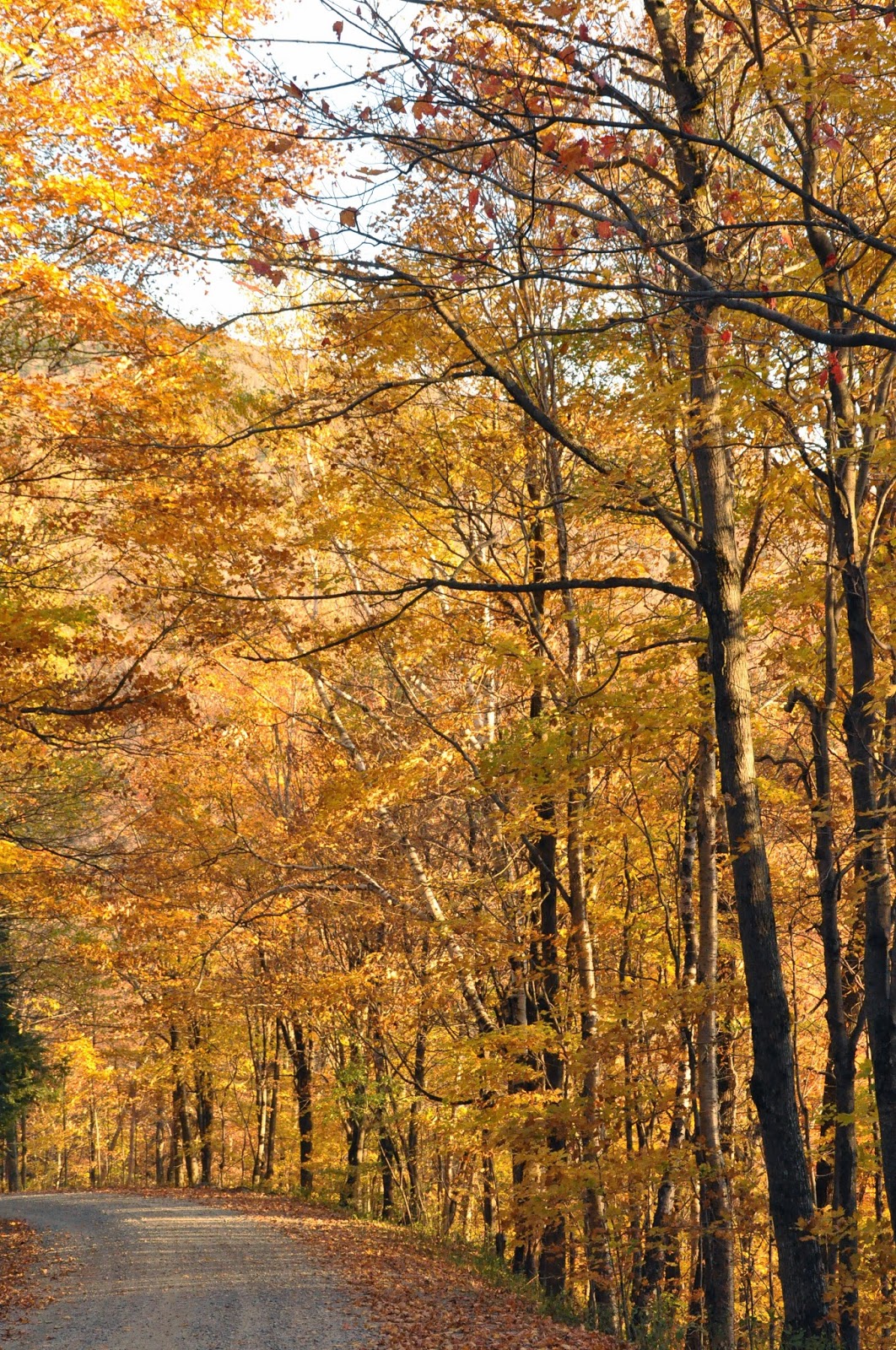 We woke up with the sun the next morning, which was perfect since I had to clear out of the campsite (fully booked over the weekend) and I was a tad nervous about how long the hike might take anyway.  An unplanned bonus to our early start was that we did not encounter a single person on the trails on the way to the peak!  We had Mount Mansfield all to ourselves. 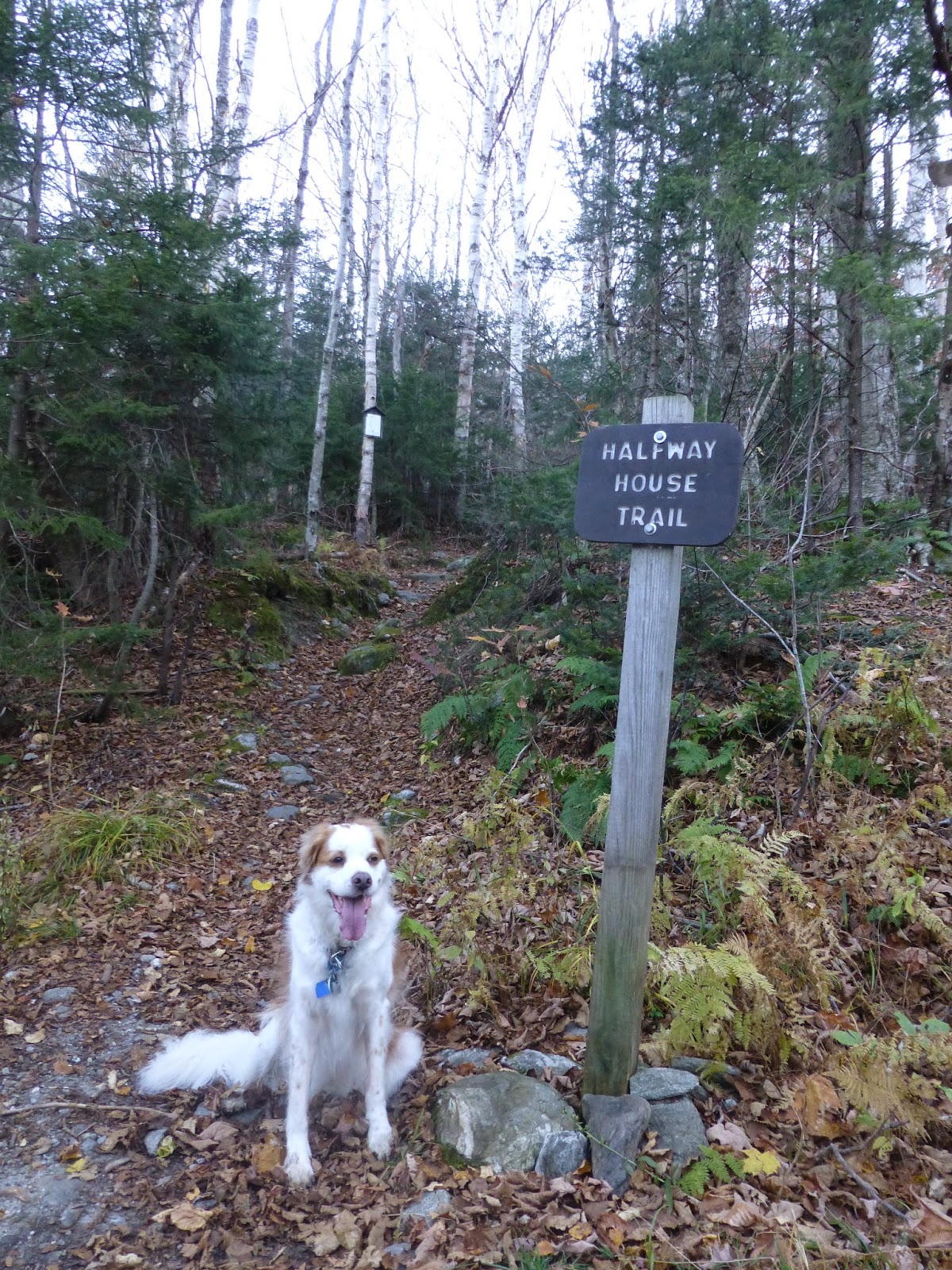 From the campground, we followed the gravel access road until it intersected with the Halfway House Trail.  Then we legitimately started to climb.  The trail was quite steep with large rocks that served as steps, and it wound its way up through really nice pine forest.  Mwenzie is a mountain goat and kept running back down the trail to make sure I was still alive.  I'm sure I'd be faster with four legs too!!

At one point, we apparently lost the trail.  I was on a mud path that looked like a trail, but then I had to actually heave the pup over a huge rock and scramble after her on all fours onto a skinny shelf of dirt clinging precariously to the side of the mountain.  For a moment, I was scared.  We weren't even halfway; was this what the rest of the hike was like??  A little more technical than I was prepared for!  And I couldn't even tell where we were supposed to go next!  I decided to take a quick sanity break.  I turned my face away from the daunting mountainside that was trying to paralyze me to discover a breathtaking pine-framed view back down into the valley of fall-changing trees.  It was a perfect reminder of something my pal Nietzsche once wrote about tourists:  "They climb mountains like animals, stupid and sweating; one has forgotten to tell them that there are beautiful views on the way up."  Thank you slippery, misleading, not-the-real-trail path for reminding me that it's not all about the scenery at the summit! 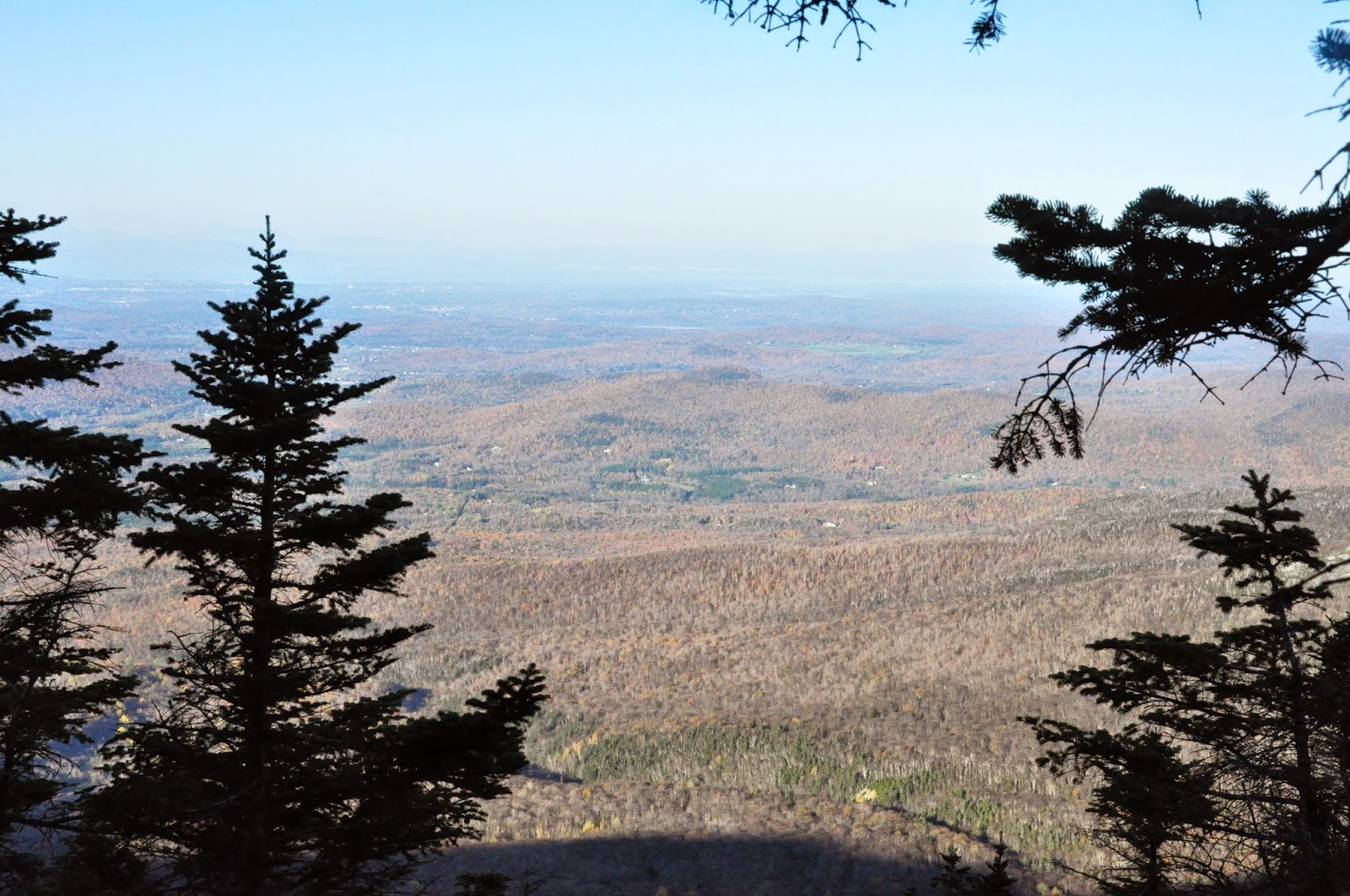 I decided there was no way this was the trail, so Mwenzie and I turned around and slid back down the giant rock.  She kept going and I realized she had been on the right trail the whole time until I called her off to follow me up that cliff.  Note to self: follow the dog.  She's a natural.  (She's also really good at finding water.  If I ever get really, truly lost, I want Mwenzie with me!) 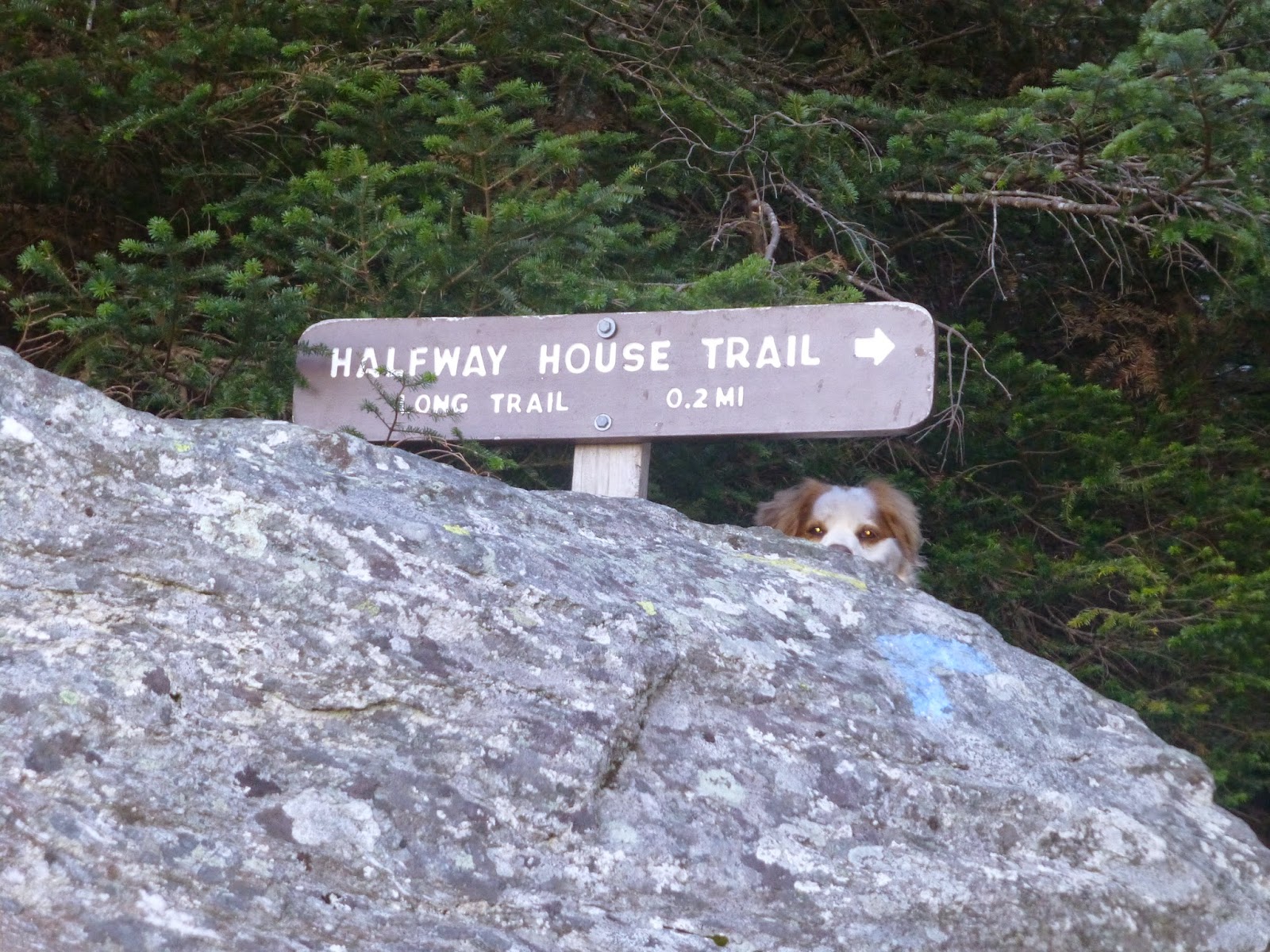 At the end of Halfway House Trail, we popped above treeline into the alpine tundra terrain that follows the crest of the mountain.  The Long Trail also goes along the ridge line, so we followed that south to stand on the Nose of Mount Mansfield.  Then we retraced our steps through scrubby pine tunnels and over bare rock (and avoiding stepping on the fragile lichens) up to the Chin of Mount Mansfield, which is also the true summit of the mountain.  Talk about a view!!  It was perfectly clear with autumn forest and blue, blue skies in every direction.  The east face of the mountain is the gorgeous ski town of Stowe.  North following the Long Trail leads to Canada.  Facing west, you can make out Lake Champlain.  It was super windy, but we stayed on the summit for a while admiring the scenery.  Also, it had taken us less than two hours to get there, which was WAY faster than I had expected and planned, so we were in absolutely no hurry! 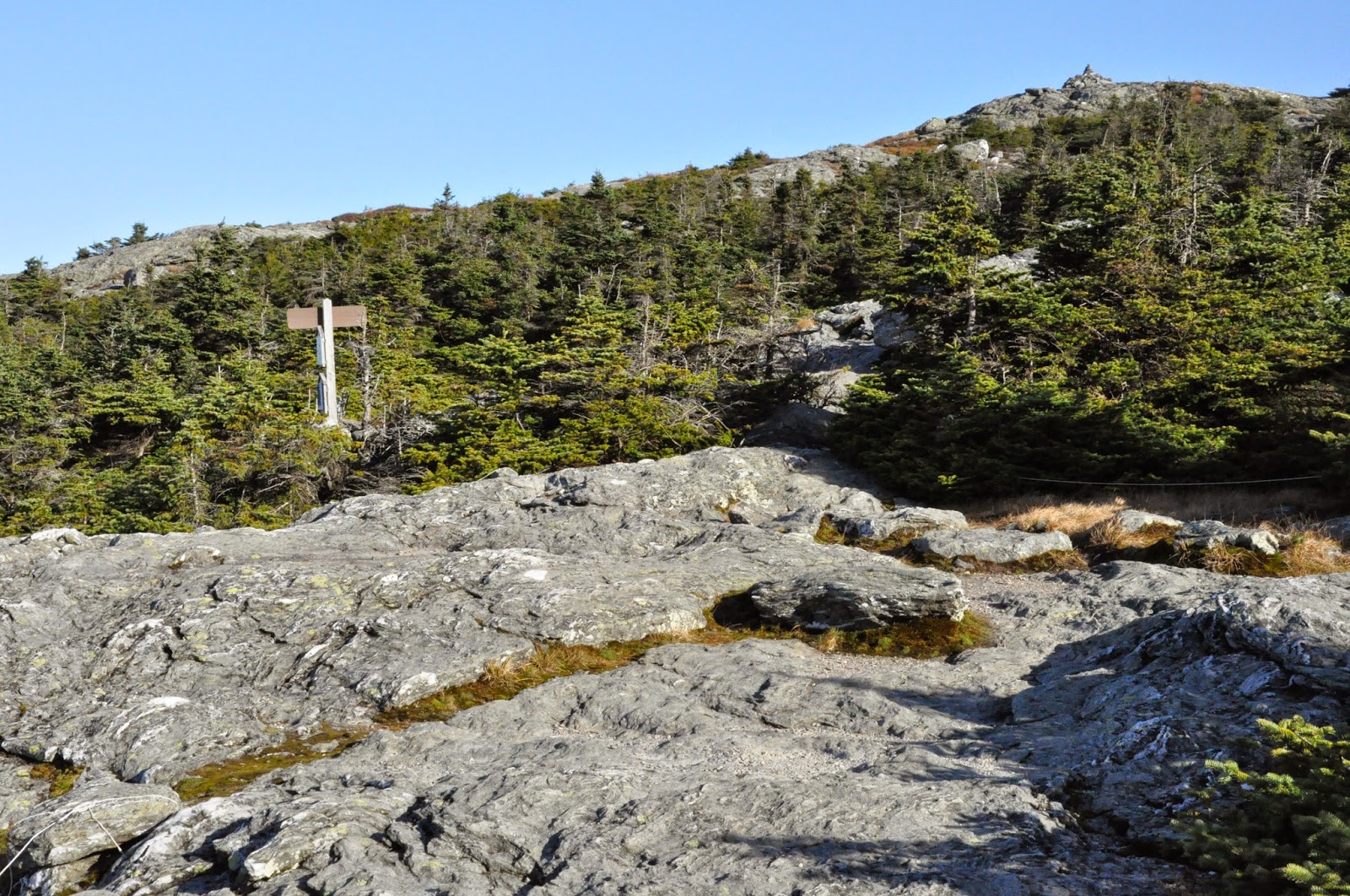 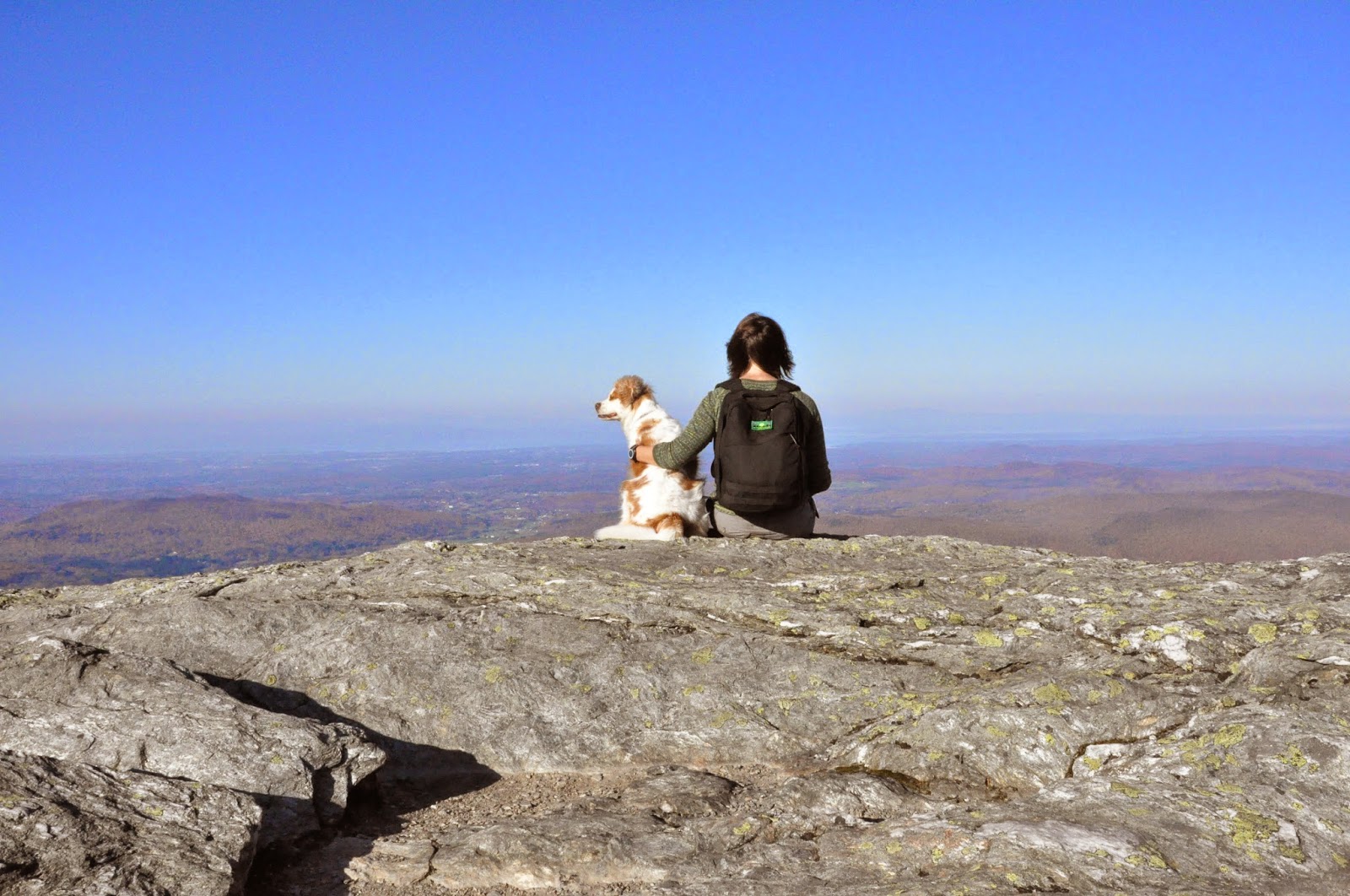 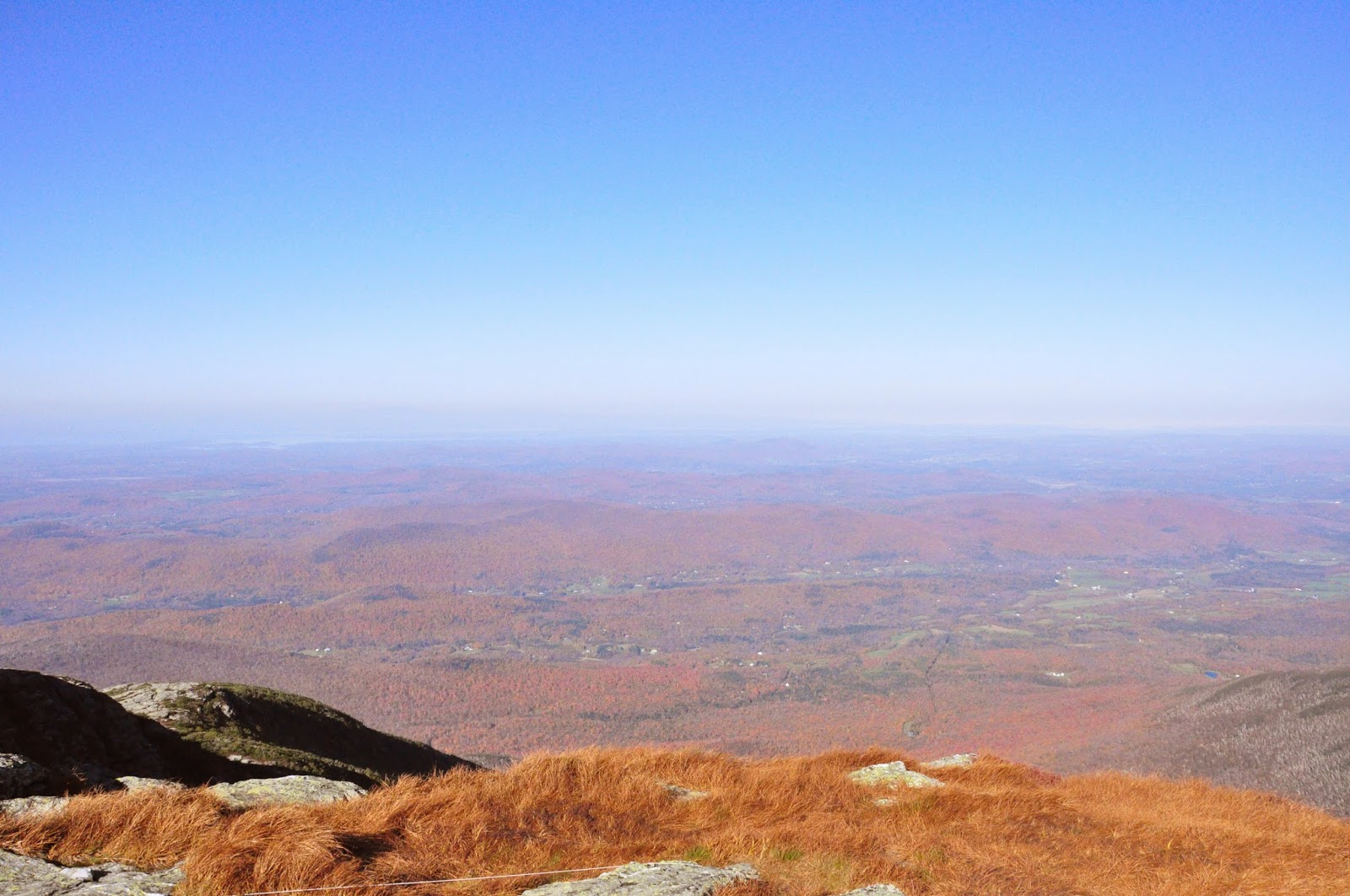 Eventually, we headed back down the mountain via the Sunset Ridge Trail, which was not as steep as Halfway House and followed along a ridge for much of the way, so the great views just kept coming.  We also started to encounter a lot of hikers, including other folks with dogs.  Once Sunset Ridge dipped back into the forest, it criss-crossed a stream all the way back to the access road.  Pups appreciated the water, and I am a fan of all the wooden bridges. 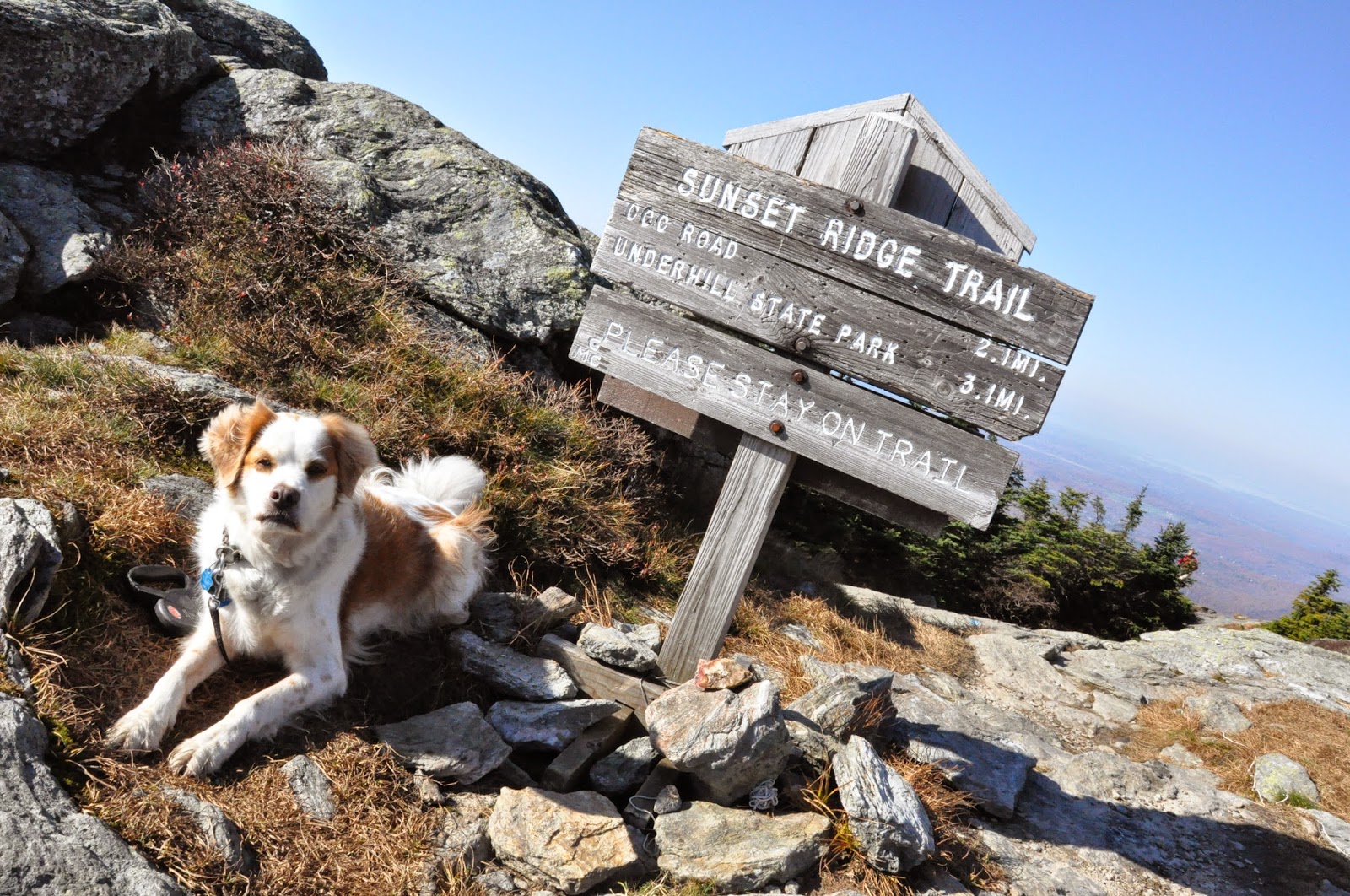 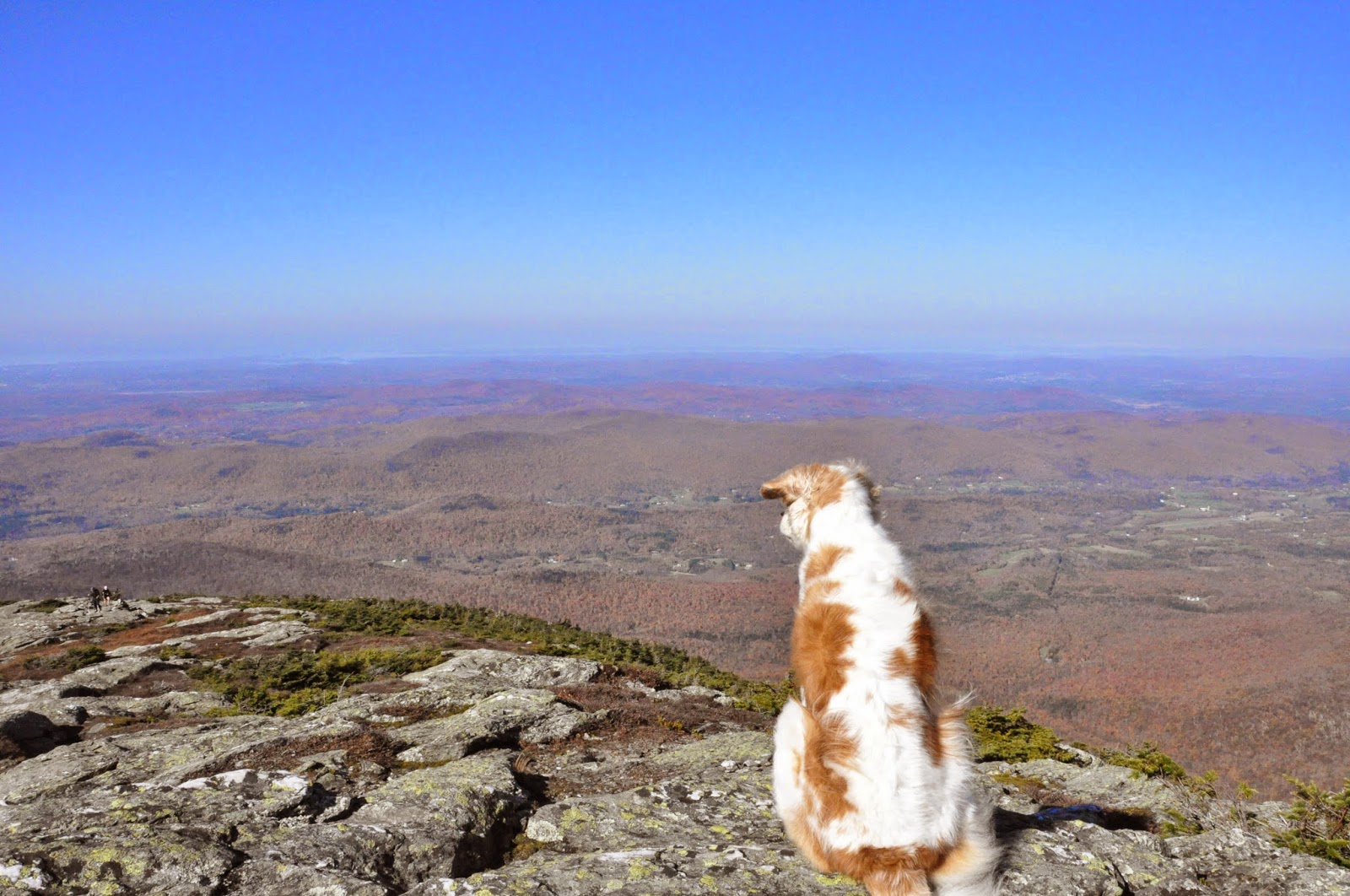 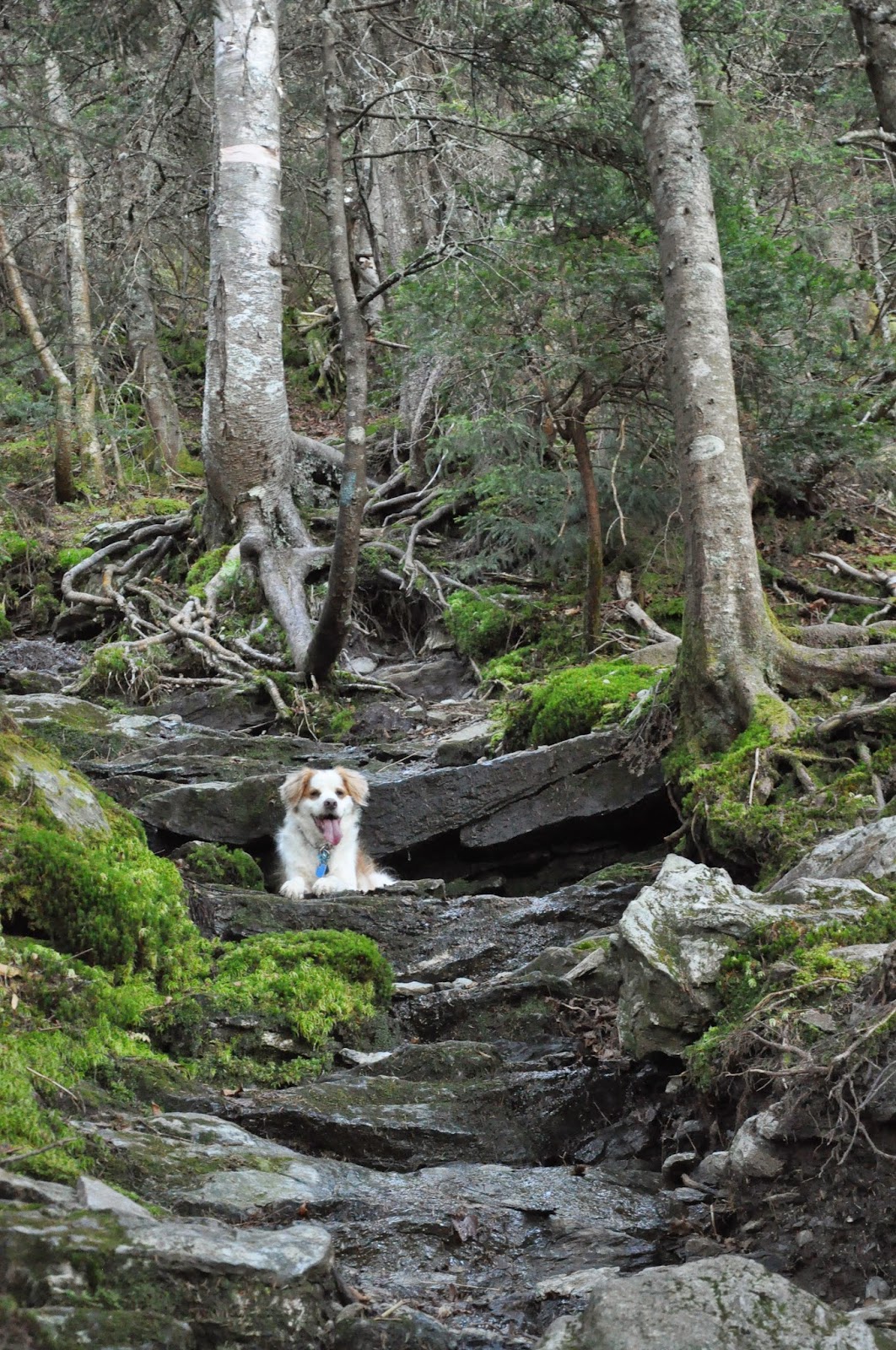 I was surprised when we popped out of the woods onto the access road.  Altogether, it took us 5 hours and 5 minutes to cover 6.3 miles and climb about 3020 feet.  After Mount Washington, I was severely over-prepared.  It's definitely better than being under-prepared, but I found the hike to be a little anticlimactic because my expectations were so off kilter.  But it was nice to finish and not have every muscle in my legs screaming at me so that all I wanted to do was collapse on the ground!  The easier terrain combined with the amazing fall foliage and gorgeous weather made the entire trip enjoyable from start to finish.

Okay, I'm probably not quite prepared for that adventure.  But my blank three-day weekend turned into a really fun outing, and I've conquered 1/3 of New England's tallest peaks!  Am I becoming a high pointer? 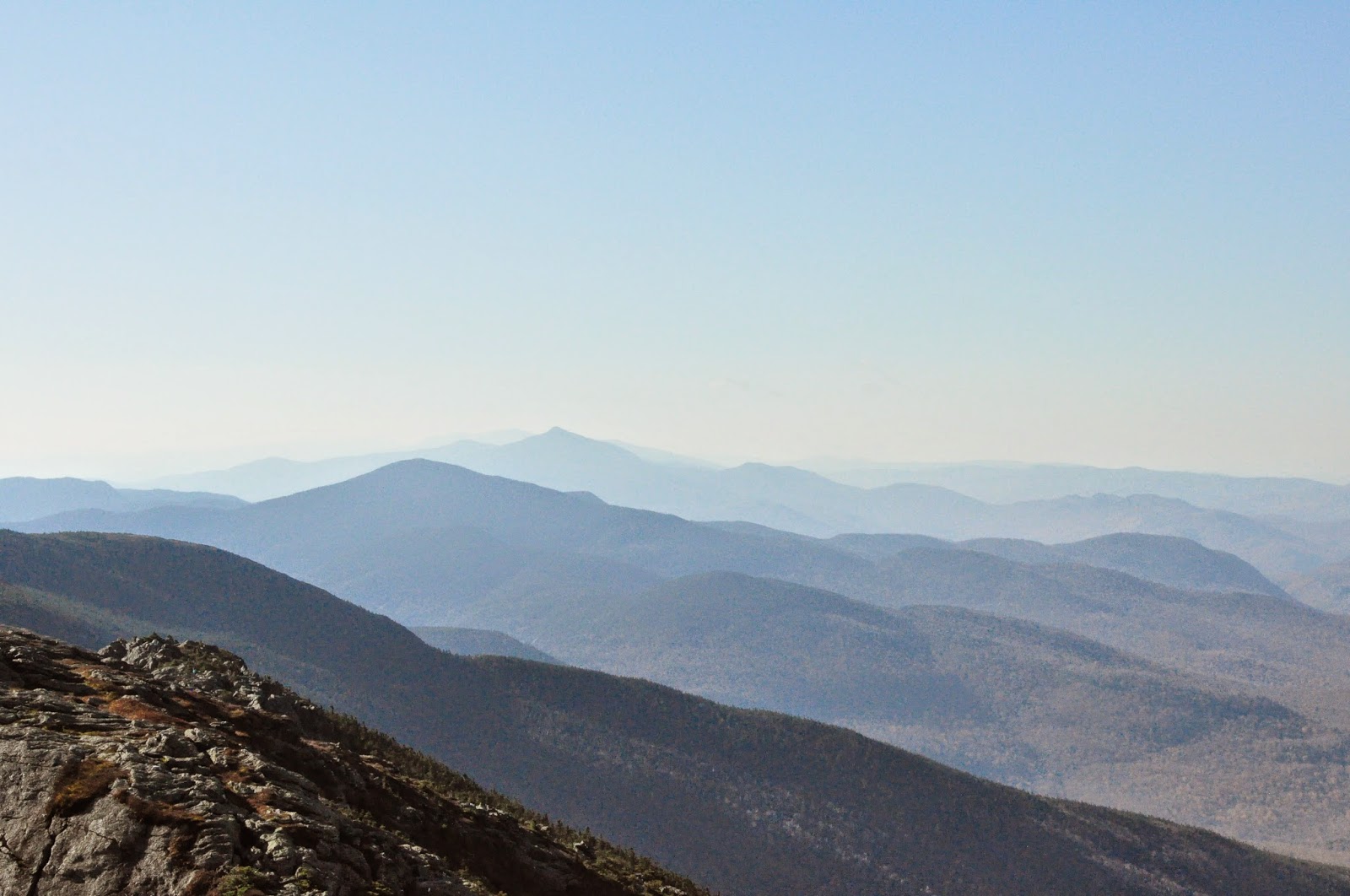 CRITICALLY IMPORTANT SIDE NOTE: on the way to/from Mount Mansfield, it is super convenient to stop at the Ben and Jerry's Factory!  It's at Exit 10 off of I-89.  You can take a quick 30-minute tour of the factory, which I always love because assembly line machines fascinate me, and at the end you get a free sample of some delicious concoction they're currently working on.  And then you can invade the gift shop and get more ice cream at the store before you hit the road again!  Nom nom!  And I don't even like ice cream!
Email ThisBlogThis!Share to TwitterShare to FacebookShare to Pinterest
Labels: America, hiking, mountains, Mwenzie