A few miles south of the tourist mecca of Colonial Williamsburg in southern Virginia, quietly sitting on the banks of the York River, surrounded by the serenity of meadows and swamps and woods, you will find the humble historic burgh of Yorktown.

Most of the time, it appears to be a rather sleepy little town.  There's an artist's gallery or two, and some antique shops tucked among the historic buildings open to tourists and the preserved homes available only for admiring from the outside.  At the bottom of the river bank, the town did some remodeling in the last several years and created a tasteful little cluster of shops and restaurants almost directly beneath the Coleman Bridge.

I think part of the reason that Yorktown remains understated in comparison to Williamsburg is that there is no larger, modern town growing out of the historic nucleus.  Instead, Yorktown is surrounded by natural space.  The battlefields of the Revolutionary War are preserved as a national park, which means lots of forest and meadow and marsh for miles in every direction.  Also dirt paths and gravel-paved tourist roads which are never particularly busy.  Translation: runner's paradise! 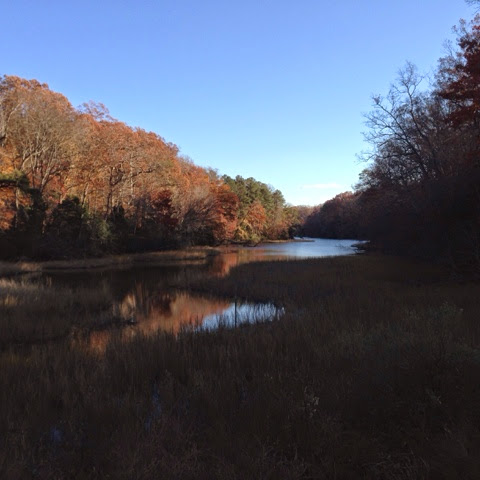 The best starting point is Surrender Field, so-named because it's where General Cornwallis threw in the towel and America achieved independence.  From the small parking area, there are many options. Head towards the river and the Coast Guard Station and after about a mile, you'll encounter this dam. 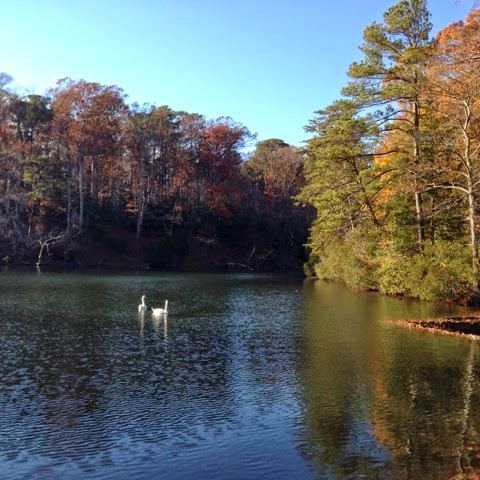 Turn around for a two mile jog, or continue up to the main road for another half mile (maybe), or cross the dam and turn left to go towards town.  After a couple miles, you'll be able to loop back around to Surrender Road and the parking area. 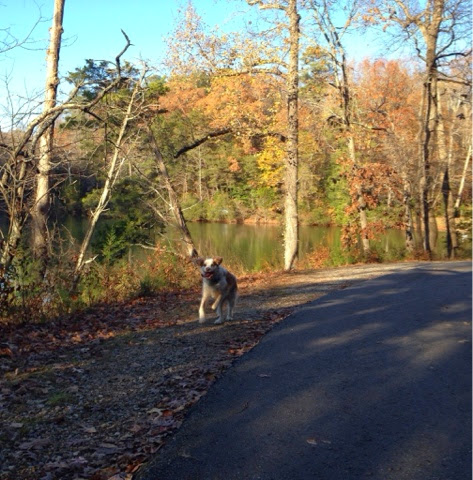 Alternatively, from Surrender Field head towards Highway 17 instead, and you'll find yourself on the route formerly known to the local cross country team as the '6 Mile Loop.'  Several years ago, the park installed a foot path that cut about a mile off the loop, although there are always random side roads and trails to bring the mileage back up.  As you continue along the 6 Mile Loop, you'll encounter a couple spots where cannons are posted along the side of the road.  After approximately one mile, there's a wide wooden bridge through this swampy area.  Take a second to peer over the side and try to spot a turtle! 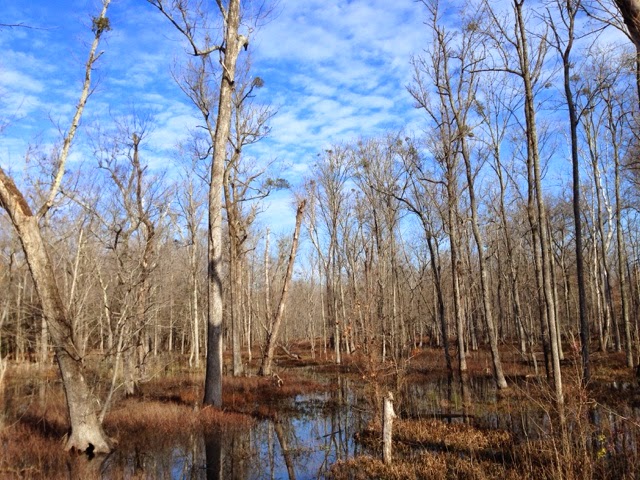 Around two miles, the road forks.  To the left, a creek crosses the road and makes a nice cool-down break during summer runs.  The road continues a bit past the creek to a turnaround point, and from there you can venture on dirt trails into Newport News Park.  Or go right, where the next landmark is the French Cemetery. 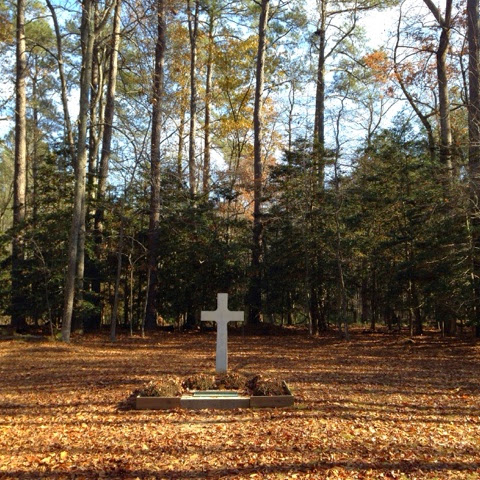 And then some more cannons.  And more beautiful scenery! 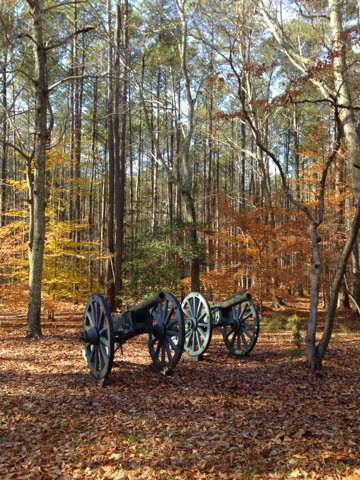 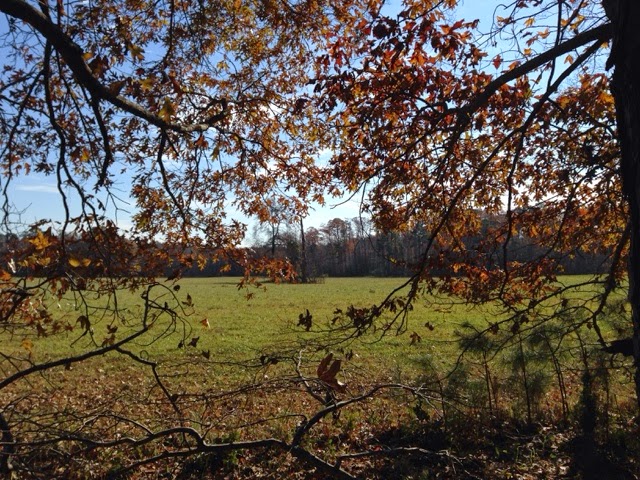 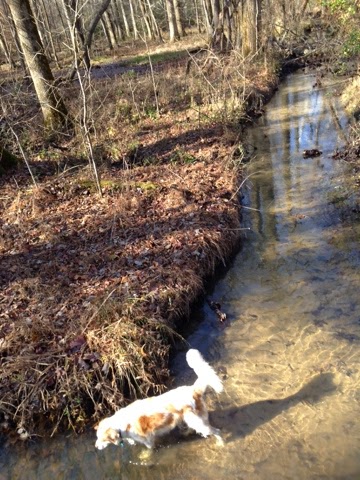 Eventually there's another fork, and you can go left onto the French Loop which adds a couple miles and a few more historic stops.  Or go right and skip the extra mileage as you wind around these huge open meadows and over Highway 17.  Not long after the bridge, the new(ish) footpath branches off to the right and brings you back to Surrender Field.  If you carry on straight, you'll end up on Goosley Road.  Hook a right and it will bring you back towards the caretaker's house, where you take another right to head back to Surrender Road.  However, Goosley is not a great road for pedestrians and has no shoulder to speak of, so the footpath is a welcome addition.

You may encounter other runners, or some bikers, and a few tourists in cars.  You may spot some deer, or at least hear them crashing away through the woods. 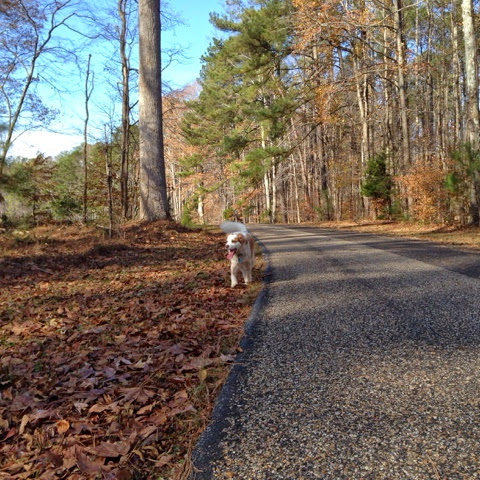 As a runner, you're guaranteed to experience the battlefields in a far more authentic way than slowly driving through in the covered protection of your car.  As the sweat beads on your forehead and your heart pounds to the drumbeat of your feet, think for a moment or two about the utterly different circumstances which these peaceful places witnessed a couple centuries ago.  Let the wind batter you a little, let the sun beat down on you, welcome the shady spots for their momentary cool, and embrace the freedom of the empty road.
Email ThisBlogThis!Share to TwitterShare to FacebookShare to Pinterest
Labels: America, running