A Snapshot of the American Southwest

A good travel story usually involves something unexpected and crazy and sometimes dangerous or scary that chucks a wrench into your otherwise perfect plans. For example, losing your keys on top of the tallest mountain in New England, but not realizing said keys have been lost until you're back at the trailhead four-ish hours and five-ish steep miles later. Or flying to Glasgow while not realizing the city has two airports and your overnight hotel reservation is not by the airport where you arrived.  Or getting stuck in a huge storm that extends your visit to Antarctica from a brief four days to ten life-changing days.

But sometimes, nothing ridiculous happens. Every now and again, I find myself on a trip that's kind of like kayaking on the creek back home. It's fun and beautiful and I thoroughly enjoy myself. The water is calm (and navigable!) and sometimes there are cool birds.  After a while, I head back to the pier, take my kayak out of the water, and go home with pleasantly sore muscles and happy memories. At no point does the creek turn into a fury of rapids at the edge of the precipice that marks an unexpected thirty foot waterfall smashing onto giant boulders in a cloud of foam and mist.

And that is okay!

In March, I took a brief roadtrip through the American Southwest which was basically a good ole kayak outing with no waterfall. Literally...I was in the desert, after all. My flights were on time, the airlines did not lose my luggage, my rental car did not break down, I did not get lost (not once! whaaaaat!), nothing poisonous tried to bite me, I never ran out of water, I didn't get an atrocious sunburn, everything I ate agreed with my stomach .... NOTHING CRAZY HAPPENED.

In a way, my mini-roadtrip was memorable simply because it was such smooth sailing. Let's be honest--it's not often that absolutely nothing goes wrong. But here's where I get to the second part of my kayak analogy--the bit about sore muscles and happy memories--because even though I don't have a cliff-hanging tale to convince you to keep reading, I saw at least one mind-blowingly amazing place and it was a trip worth sharing!  And bonus for you, you'll still have fingernails by the end of this post.

My drive started in El Paso, Texas, the closest normal-sized airport to my final destination in New Mexico.  El Paso is an odd little city.  It felt out-dated and tired, like it's the set for a Depression-era movie with no hope of a happy ending.  There was a lot of construction downtown, but I'm not really sure what they were working on.  El Paso has a university, and minor league sports teams, but comments from folks at the airport indicated that the primary source of lifeblood is the giant Army base.  But my strongest impression from El Paso was the border fence, which completely creeped me out.  I passed the pedestrian border crossing to Juarez, took a few more turns, found a highway pointing north, and suddenly I was driving next to a giant fence that looked like it was the demarcation of no-man's land.  It was exactly like being in a war zone, or an area of prolonged conflict.  It's unsettling to visit such places, and the fences are a constant reminder that there's tension simmering beneath the surface.  We keep building walls to separate people and eventually re-remember that it really does not fix things.  The Mexican side of the border was a strip of barren, dusty land that eventually faded into the warehouses and homes of Juarez's neighborhoods. The U.S. side was me on my highway sandwiched between that tall, forbidding fence and railroad tracks.  It was several miles before the highway diverged, and I was quite happy to head north into the high desert and away from the unwelcoming wall.

Desert terrain is not what pops immediately into my head as an example of gorgeous scenery, but mountains always make the cut.  And New Mexico has desert mountains.  In Las Cruces, I turned east and drove straight up a pass in the San Andres to pop out to this incredible view:

Welcome to White Sands Missile Range!  Many people see a vista like this and immediately feel small, alone, and even bored by the awareness that there is nothing for miles and miles in every direction.  It makes my blood tingle.  This is the wild, unforgiving land that chisels away softness to create the steel-cored individuals whose sun-darkened faces and dusty clothes populate our fantasies of the Wild West.

I spent a bit of time at the White Sands Missile Range military base, and a bit of time in the booming megalopolis of Alamogordo, but my favorite bit of time was spent right halfway between the two ... basically at the beach.

Beach?  In the middle of the desert? 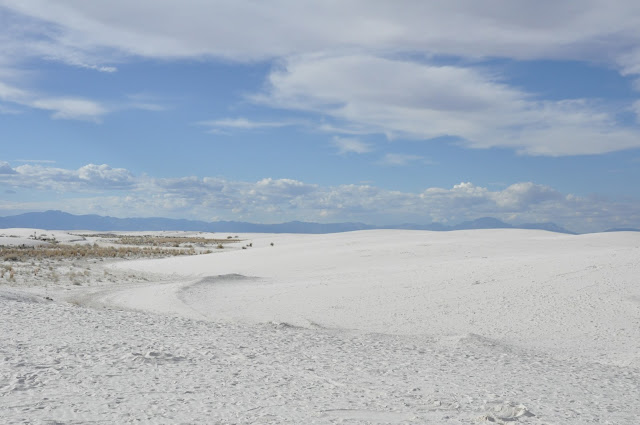 Pretty much.  In fact, it was even BETTER than the beach, because at every beach I've ever been to that has gorgeous white sand dunes, there are also signs everywhere warning how fragile the dunes are and don't even think about walking/running/jumping on them.  Just to be safe, don't even breathe on them.  Stay 10 feet away at all times.

But the expanse of powdery-soft white gypsum sand that is White Sands National Monument is a dune-lovers paradise.  You can walk wherever you want, jump off whatever you want, throw sand at whomever you want, and even sled down whatever dune you want!  Sledding is not just tolerated; the national park service encourages it by selling plastic disc sleds at the visitor center. 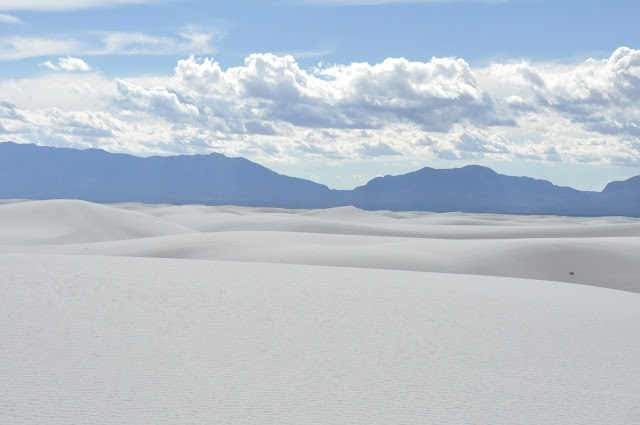 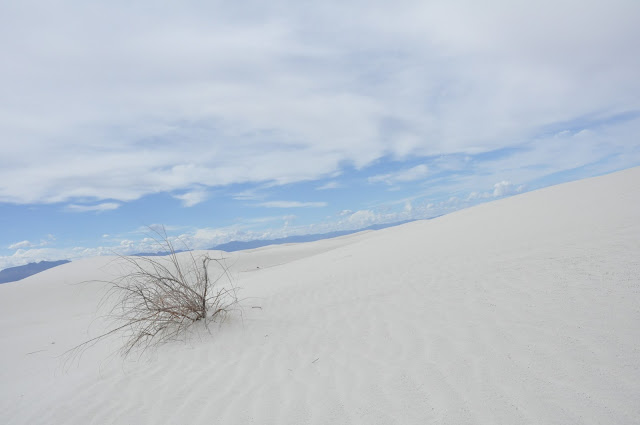 From the highway and the park entrance, the white dunes peek up over the scrubby sage that populates the rest of the wide valley between the San Andres and Sacramento mountains, but the first jaw-dropping moment comes a couple minutes down Dunes Drive, when you leave the vegetation behind and are transported to the Sahara Desert.  The road is covered in white sand and snowy drifts rise up on either side of you for as far as you can see.


I beelined past the short Playa Trail and Dune Life Nature Trail and Interdune Boardwalk for the very far end of the access road into the National Monument.  As I drove, I saw families with beach umbrellas, lounging in beach chairs, enjoying picnics and building sand castles.  I saw couples strolling in the sand, folks playing with their dogs (YES, DOGS, TOTALLY ALLOWED!!  MAJOR POINTS FOR WHITE SANDS!), and a group of friends tossing a Frisbee.  It was like any trip to the beach, except the ocean was missing.  And, of course, folks were sledding on the dunes.

At the end of the road, I parked and started out on the Alkali Flat Trail.  I wanted to disappear into the dunes to where I couldn't see a single person.  I walked for a while, and was pleasantly surprised that most of the sand is quite packed down underfoot, so it wasn't nearly as strenuous as I expected.  There are some deep spots in the valleys, and slippery spots coming off the crest of a dune, but mostly it was just like walking on dirt. Alkali Flat Trail is about five miles round trip (so I was told), and I had a marathon the next day, so I wasn't keen on trekking the whole thing.  I decided to cut across the middle of the loop, vaguely following a pair of hikers who had passed me at the beginning of the walk.  Up a dune, down a dune, across a flat, following the crests since it was the easiest walking.  It was remarkably difficult to see the terrain changes because it was an overcast day and there were no shadows to mark sudden steep drops into the sand valleys.  Some of them were over ten feet, and basically cliffs! 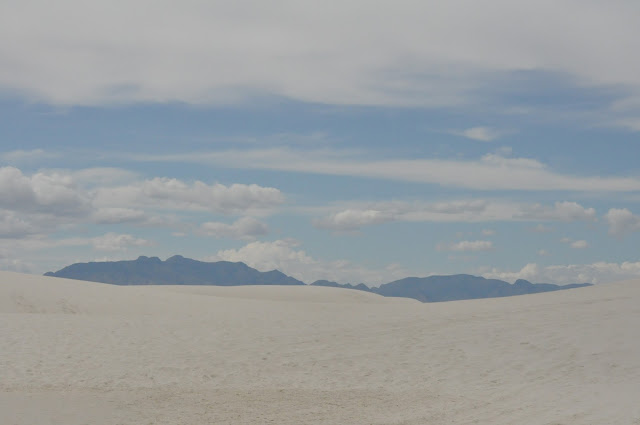 Once, my unaware trail blazers disappeared from view.  I scrambled to the top of my next dune, but I still couldn't see them.  I started to panic a little.  My heart rate picked up and I had to consciously keep myself from running to the next crest.  There was no sign of life in any direction, not even footprints in the sand, and it's a little more terrifying to realize how very alone you are in an unforgiving environment like a barren desert than in a life-ful environment like a forest.

As I moved through the sand, it occasionally squeaked under my feet, so I stopped walking.  I made myself stand completely still and let the incredible weight of unadulterated silence crush down on my shoulders.  No twittering birds, distant rush of moving vehicles, quiet rustle of leaves moving in the breeze, or buzz of an invisible airplane passing by miles overhead.  My heart sounded like thunder echoing in the Grand Canyon.  I tried to hold my breath, which of course did nothing to dull the roar of my heartbeat. 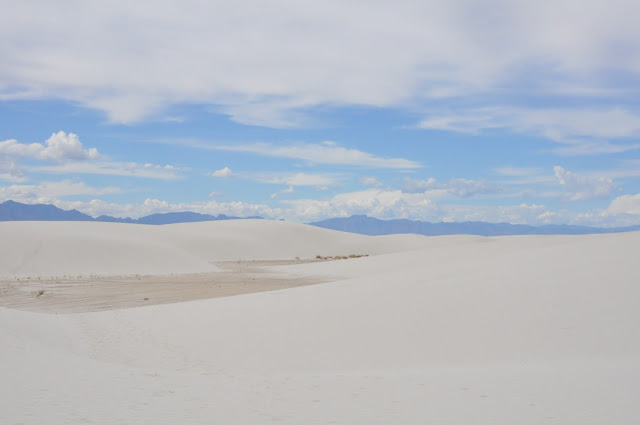 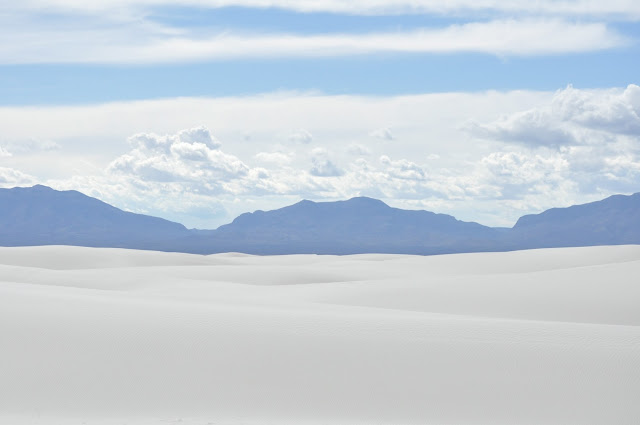 I felt myself shrink as the blinding desert and shadowy mountains rushed away from me, expanding farther and farther to dwarf me in the center of the overwhelming stillness.  But at the same time, the fear passed.  If it wanted, this desolate and beautiful place could eat me alive.  I didn't care.

I continued my trek through the undulating, identical dunes and eventually people-specks appeared on the horizon.  I saw a trail marker and angled my steps in that direction, weaving up and down with the pattern of the sand until eventually I reached it.  My battered shoes kept filling up with sand, so I paused to take them off and walk barefoot through the silky gypsum for a few minutes. 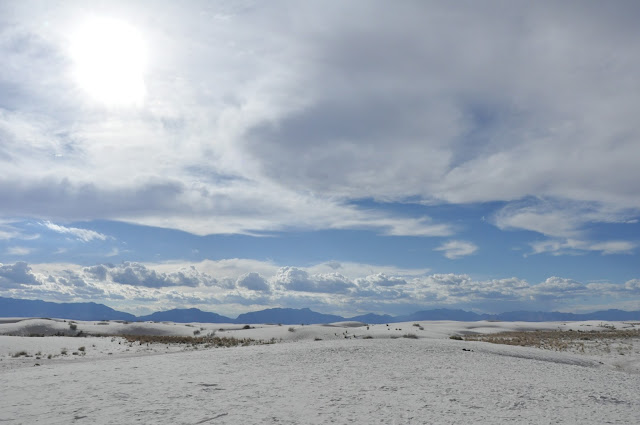 Eventually I was close enough that conversations drifted to me through the still air, and the mountains receded back to their guardian position along the far horizon.  I found an empty plastic bottle lying at the foot of a dune and carried it out with me, leaving only shallow dents in the sand to mark my passage. 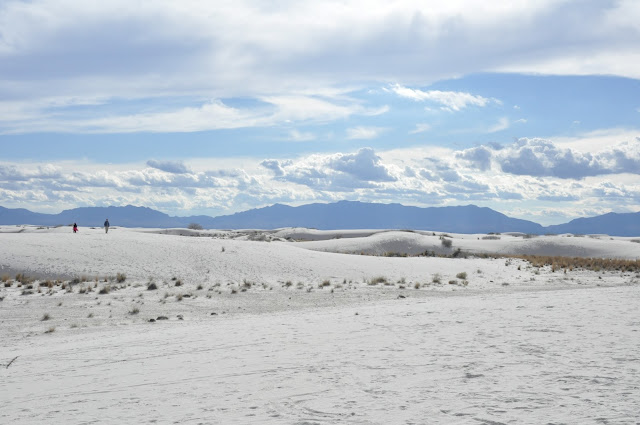 As I drove out of the national monument a while later, the sun finally busted through the clouds and flared across the sand with blinding light.  I wanted to stay, and watch the palette change as the sun faded behind the mountains.  I could imagine the dunes glowing pink in the sunset, slowly shifting to cool blue as the light dimmed and dusk settled in.  That's when the desert foxes would peek out of their dens, and the rabbits might venture forth to nibble the dusty sage.  What would that landscape look like beneath a full moon?  Or in the misty glow of early morning?  I was only there for one short afternoon, but the monument would easily draw me back to see it through the changing seasons in every possible facet of it's myriad beauty. 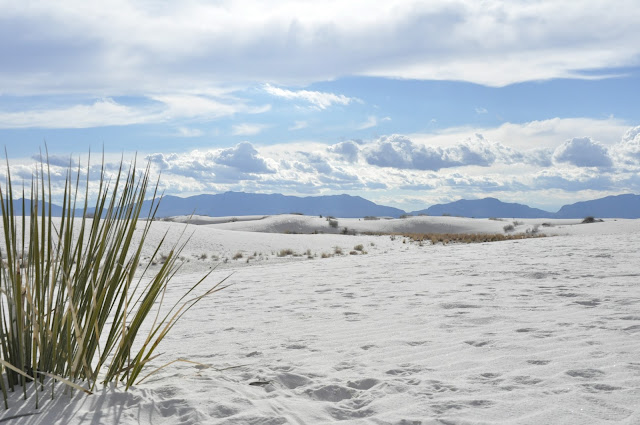