I ran my first 100km race on Saturday. It was an accident. There weren’t even supposed to be any races in April – pretty much every event across the planet has been cancelled or delayed until the fall as part of the effort to slow the spread of COVID-19. And yet there I was on April 4 racing with several thousand runners not only from around the world, but physically located in several dozen separate countries, and next thing I know I’ve run both longer and farther than ever before. Where did this alternate reality come from?


Allow me to introduce the Quarantine Backyard Ultra, the brainchild of Personal Peak Endurance Coaching. Although first I need to go one step further back to explain the Backyard Ultra, which is the brainchild of the one and only Lazarus Lake. (If you’re a total newb to the endurance running community, check out the documentary “The Barkley Marathons: The Race That Eats Its Young” to learn more about this evil genius man and one of the most notorious ultramarathons in the world.) Laz created a race called Big Dog’s Backyard Ultra in 2011. He named the race after his mutt and hosts it literally in his own backyard. The concept is quite simple: the winner is the last person still running. Everyone else gets a DNF (Did Not Finish, for the newbs). Competitors must run 4.167 miles every hour, and be ready to start the next lap exactly after one hour. Miss the start bell of any lap for any reason and you’re out. There is no time cut-off and no goal distance. The winner just has to outlast everyone else.

The swift spread of COVID-19 crushed a lot of athletic hopes and dreams in the spring of 2020. Races are cancelled or postponed, tracks are closed, running groups can’t get together to train, and none of us know when things will start to trend back towards normal. The initial few weeks as lockdowns went into place were mentally really tough as we processed through denial into anger and sadness and hopelessness. We suffered through the paradox of having many of our motivations snatched away such that we didn’t even want to go out and run, and yet needing to run for our mental health, especially in places where getting some exercise was one of the few permissible reasons for leaving the confines of the house.
And then along came Personal Peak with their genius idea. Why not do a Backyard Ultra virtually? Thanks to technology like Zoom, YouTube, Facebook, and Strava, you can have thousands of runners all over the world connect together to compete in the same race without stepping outside, let alone on an airplane. So that’s exactly what they did.

When I signed up for the Quarantine Backyard Ultra about a week in advance of the race, all I knew was that it was free and you could run as far as you wanted. I registered using Google Docs and received a bib number and a Zoom link for race day. We had the option of doing a Zoom check-in on Thursday evening or Friday morning to make sure we knew how to use the program and were clear on the rules of the race. It was somewhere between my Zoom check-in and Saturday morning that I learned what Backyard Ultra is all about. And then I started to get really excited about it. Here was little ole me, running a Lazarus Lake race! The first-ever virtual Backyard Ultra! With some AMAZING runners – the elite field included ultra greats like Harvey Lewis, Michael Wardian, Dave Proctor, Anna Carlsson, and Maggie Guterl. These people are world class, but here I was toeing the line right along with them!

This was going to be FUN.

In addition to the regular rules of Backyard Ultra, Quarantine Backyard Ultra also mandated that runners comply with COVID-19 restrictions. This meant that some runners did laps on their balconies or around their living rooms; some used treadmills; some ran outside. We are still allowed to exercise alone outside, so that’s what I did. We set up a table in the driveway loaded up with snacks and drinks, and I started and finished every lap there. We dug out an extension cord to bring the laptop with the Zoom feed as far outside as possible. Luckily it was a beautiful day to be outside and time zones worked in my favor so that my race started at 0900. Thus the time warp began. 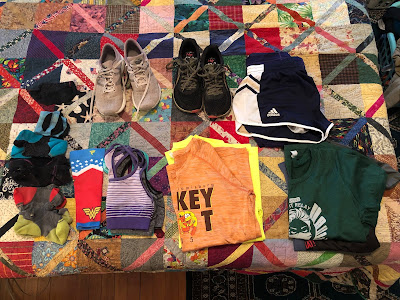 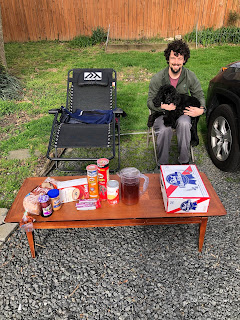 My original goal for this race was to do 10 laps. By Friday evening, I had decided to go for 12 hours instead (aka 12 laps). In the end, I did 15 loops which means I was in the race for 15 hours, over 11 of which were actually spent running. That’s 62.63 miles. Just over 100 kilometers. 2411 people started the race, over 1300 of them DNF’d before me, and there were only about 200 of us left on Zoom when I called it a day after the 100km mark. My only sense of time passing was when the sun went down. There were a couple laps towards the end where everything really hurt and I was very focused on that, but the time still went by quickly. I can’t explain it. If you know, then you understand ... and if you don’t, you’ll just always think it’s crazy. When I think back on those 15 hours, my stream-of-consciousness trying to process the experience and remember everything that happened goes something like this:

It was really nice running weather, and my legs felt amazingly good. I wasn’t even in a marathon training cycle. I had just been running 30 to 40 miles a week—pretty average. I did my first lap on the bike path toward Rosslyn, and then a different direction on the bike path, and then a lap through a neighborhood that was one of only two routes that I didn’t repeat. It was fun, as always, running with Reese and she appreciated the walk breaks that we don’t take on normal runs. I changed shoes and socks four times, running the majority (seven laps) in my Sauconys, four in my Altras, and three in my New Balance. I wore SmartWool socks except with the Altras, when I switched over to Injinji for a little while. It was entertaining having Greg bike a lap with me while trying to take videos and photos. And I was very glad for his company at 10pm when I headed out for Lap 14. My feet hurt and I was getting tired; I needed a distraction. It was great to be back at the house every 4.167 miles and it was super nice to put on a dry sports bra and shirt every 3-4 laps. I think in total I ate four pickles, a can of regular Pringles, a can of chicken soup, one peanut butter and jelly sandwich, and three packs of Clif blocks. Maybe that wasn’t enough, but it’s the most consistent I’ve ever been with nutrition. Greg and Reese made an excellent support team. I abandoned the bike path after it got dark partly to stick closer to home and also to avoid the hills. I attempted to run down every street in the Virginia Square area. I was very curious what my final map would look like! I only had on long sleeves for the first three laps, and then T-shirts the rest of the time. Was it humid? It must have been humid. It was mostly overcast and didn’t feel very warm, but I finished off my 16oz water bottle about three miles into every single lap. Pickle juice and chicken broth tasted really really good after all the Nuun water. And milk! Always milk, are you surprised? Nope. I didn’t drink much though, probably only two cups. Saved the biggest slurp for right after I called it quits. Maybe the improved hydration and nutrition made a big difference. Maybe it was the fact that there was no set distance I had to reach because everyone DNFs this race unless they win. I don’t know, but I didn’t start to get sore until around mile 50. And even then, the most sore thing was my feet just from pounding pavement for so long. My quads were screaming at me by the marathon point of the JFK 50 miler; they barely whispered at me during this race. Did the rest breaks make that much of a difference? I don’t know! But I felt better longer than I ever have, so I scrapped my original goals and instead ran my first 100km. I don’t know where it came from. I ran it on my base rather than event-specific training. My muscles held up better than any race I’ve done before. My stomach held up better too! All of these improvements amaze me. Why would I feel better than I ever have when it’s the longest I’ve been on my feet and the farthest I’ve run? What a day. What a race. I’m proud of myself. I had a lot of fun. This is my COVID-19 silver lining.