A single day is not really enough to fully experience a city, but I will definitely take that over not getting to visit at all!  So aside from sleeping, I crammed in what sight-seeing I could during my one full day in Ottawa.  Periodic rain deluges kept life interesting too.  Thank goodness for last minute decisions to pack a rain poncho! 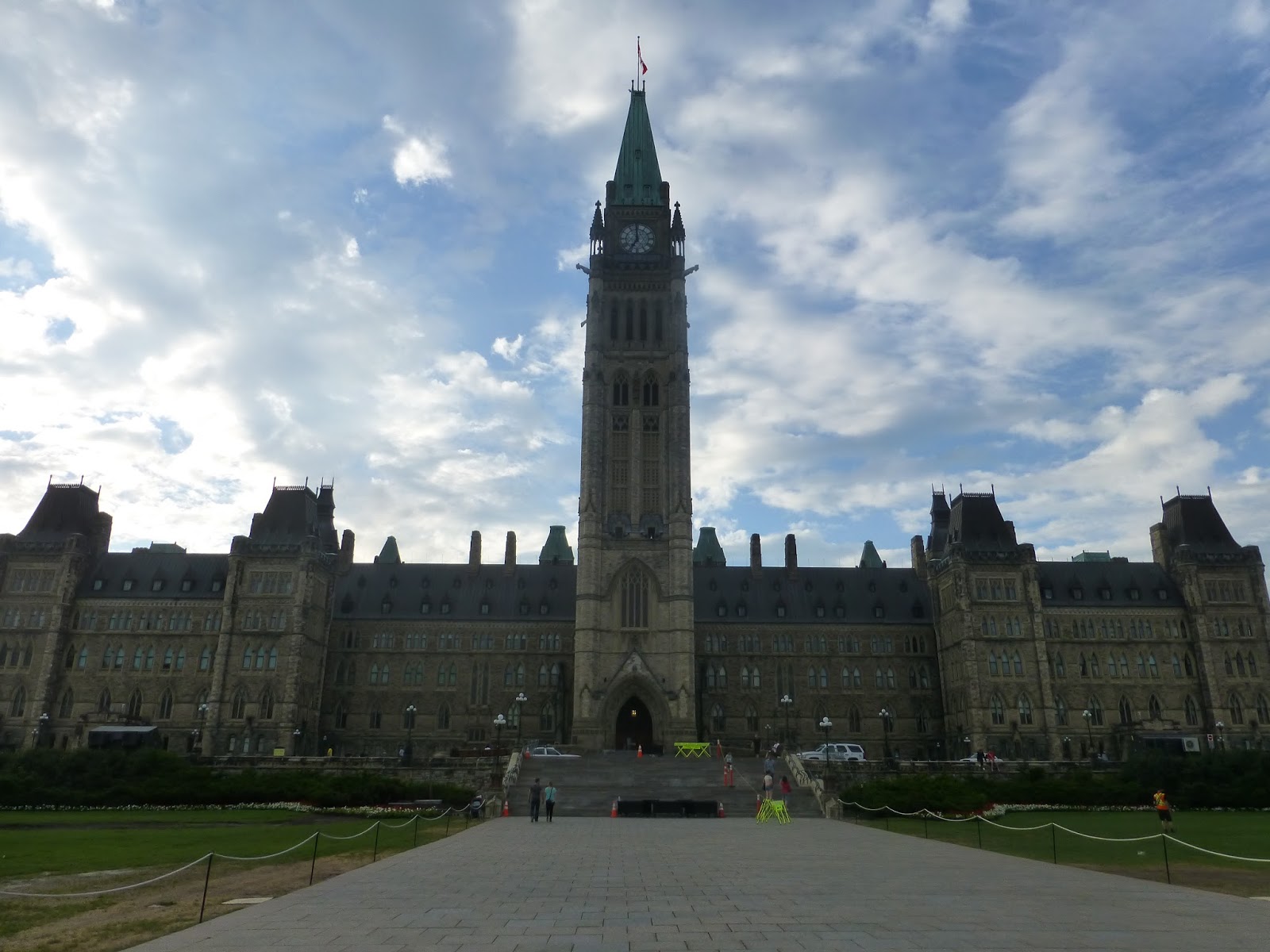 My number one recommendation in Ottawa: GO SEE PARLIAMENT.  Ottawa is the capital of Canada, and thus host to many national government buildings, but Parliament is far and away the coolest.
(Note: I may be a tad biased, since Parliament mimics the architecture of my favorite building in London and top five on my list in the entire world.)  I spent a lot of time just wandering around the Parliament building soaking up the sun (when it was shining) and playing with my camera.  The building is free access on all sides and there's a lovely grassy area in the center of Parliament Square where, to my delight, I stumbled upon a group of people playing soccer one evening.  That would never happen in America.  It was refreshing to not have security posted everywhere!  But I digress ... I love the Parliament building.  At night during the summer, there's a cool laser show called Mosaika that sums up the history of Canada in lights across the face of the building. 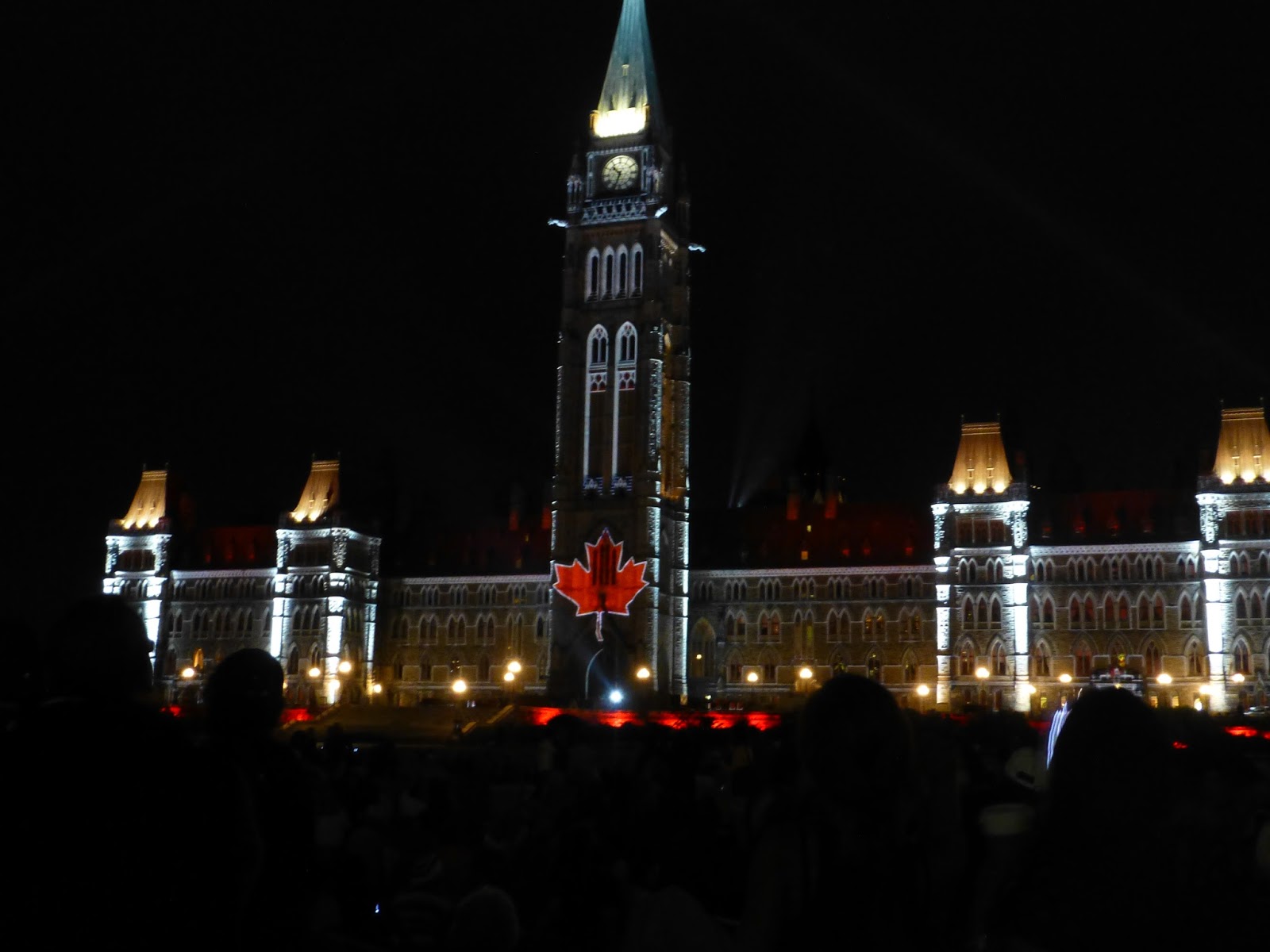 Very neat.  You can also go on a tour of Parliament, for free (just reserve a time in a little building across the street, they'll give you a ticket), which gives you access to the House of Commons and the Senate and you get to hear about some of the architectural history and random tidbits like why Queen Victoria's train has been cut off in one of the paintings on the walls (it was rescued from a fire and reframed).  And if you're a bibliophile, you will LOVE the library.  LOVE.  It's an amazing room tucked in the back of the building, gorgeous from the outside too but naturally even more awesome on the inside.  Lastly, you may have the opportunity to go up to the top of the Peace Tower and enjoy great panoramic views across the city and take a moment of silence in the Memorial Chamber.  Lots to see when you visit Parliament! 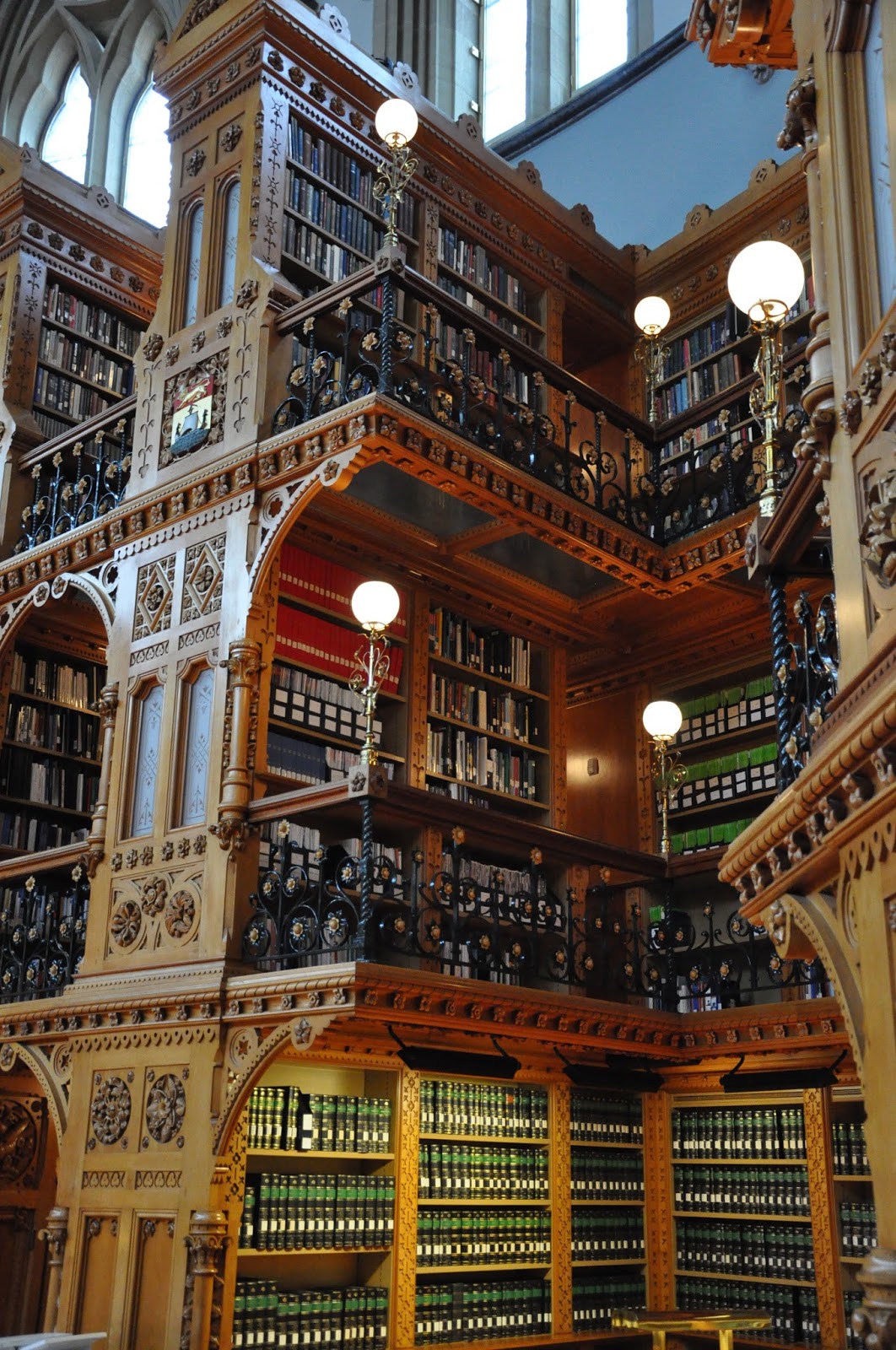 When you're finished there, it's time for a walk.  This walk will culminate at Byward Market, a fun area with heaps of restaurants and pubs and stores and outdoor stalls.  But you can see a few more neat things along the way, so you just walk down Wellington Street which becomes Rideau Street and turn onto MacKenzie Avenue just past the Fairmont Chateau Laurier, which is basically a castle.  Behind the castle is a lovely public park that offers some great views across the canal back towards Parliament and out over the river.  Just past the National Gallery is Nepean Point, which again provides wonderful vistas.  Then wander down Sussex Drive past the American Embassy and you'll find the Byward Market area, along Clarence and York and Murray Streets. 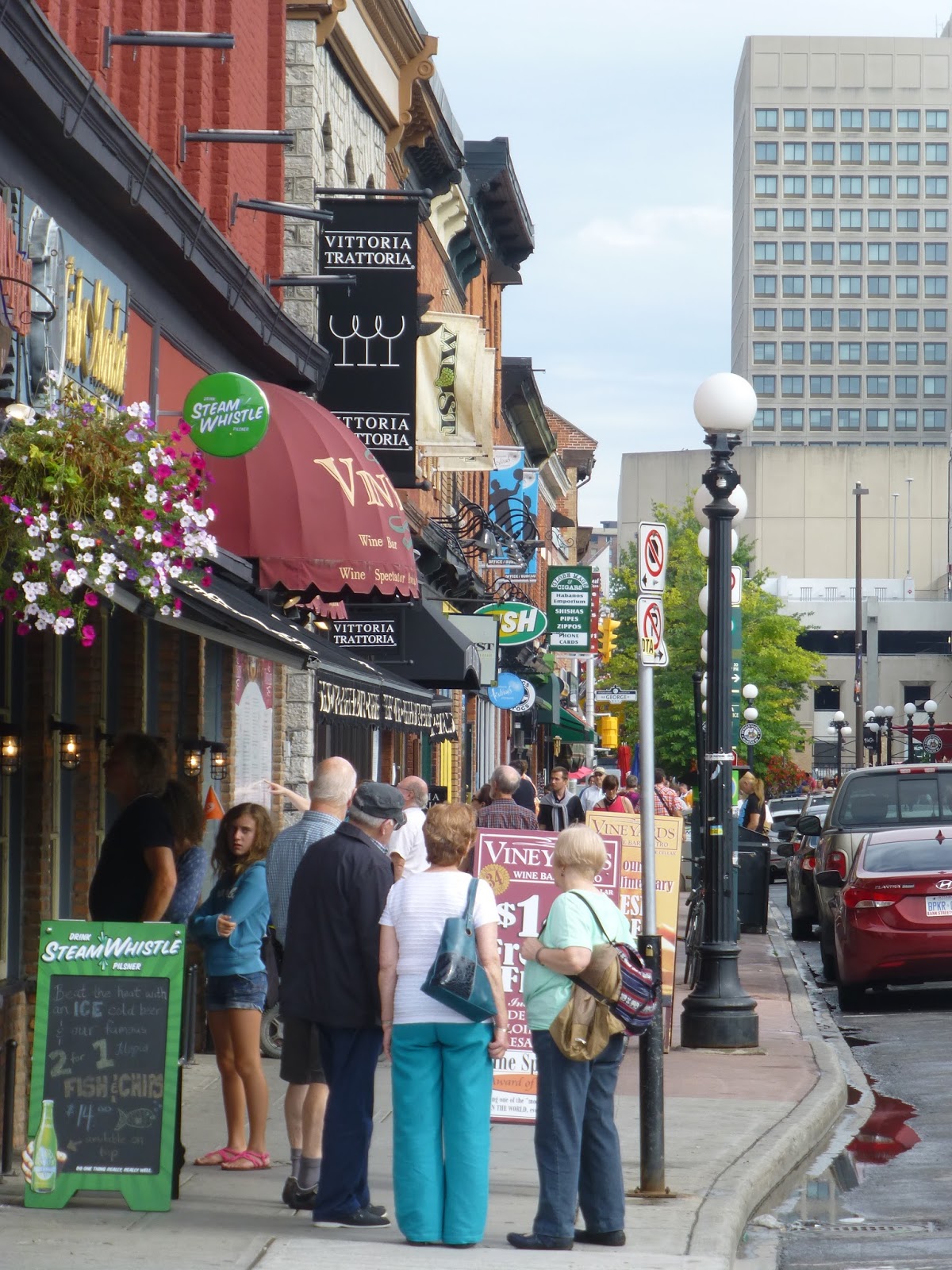 There are a whole slew of Irish and English pubs, many of which have outdoor patios (Aulde Dubliner Pourhouse), and other genres of restaurants like Italian, Indian, Thai, even Cajun (Fat Tuesday's)!  There are shops and outdoor vendors during the day as well, and the area is a lively night spot.  And you can sample a BeaverTail while you're there as well! 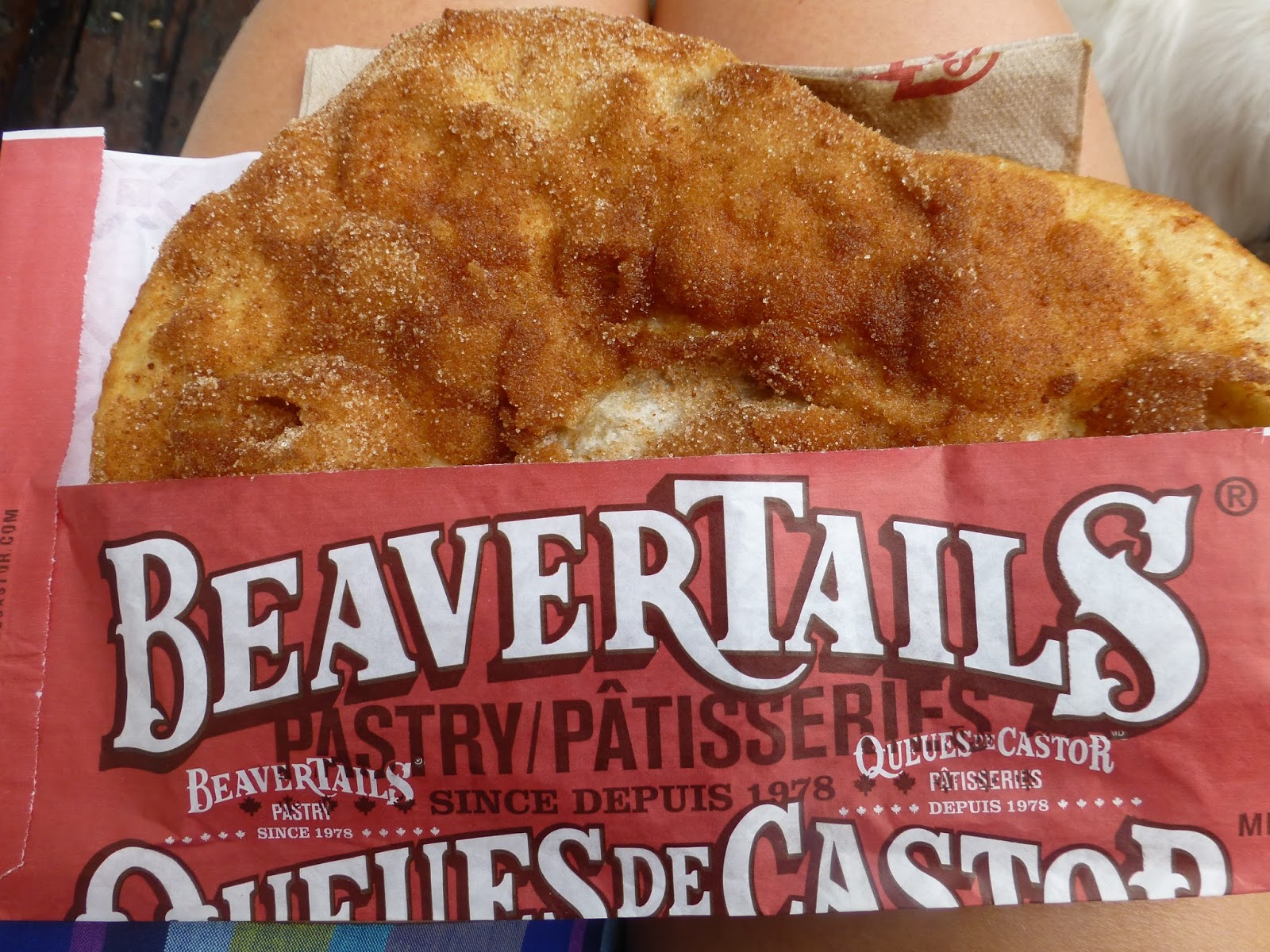 Another fun area in Ottawa is Sparks Street, which is a pedestrian thoroughfare with shops and restaurants and pubs.  A random outdoor concert took over a full block on one of my night's on Ottawa, and according to their website, there is always something happening there.  I like the Irish pub, D'Arcy McGees, which is at one end of the street.  I've also been to a Three Brewers (not this location specifically) which is at the opposite end of the street.  They offer a yard of beer, which is a fun option for trying their different brews!

If you go wandering around between Parliament and Byward Market, you won't be able to miss the Rideau Canal, but take the time to walk along the canal instead of just passing over it.  The canal became a UNESCO World Heritage Site in 2007 since it's North America's oldest canal system that's been in continuous operation since it was opened.  Immediately between Parliament Hill and the aforementioned castle is one of the set of locks.  If you follow the canal towards the Ottawa River, there is a walking/bike trail that curves along the shore beneath the cliffs of Parliament Hill.  Or you can follow the canal for miles and miles all the way to Kingston.  :)  I only went a couple miles up the canal, because it was hot and the pup was getting tired, but I've been told it's a lovely bicycle ride or run and the canal path goes through some great parks and beaches along the way.  In the winter the canal freezes over and you can skate on it instead! 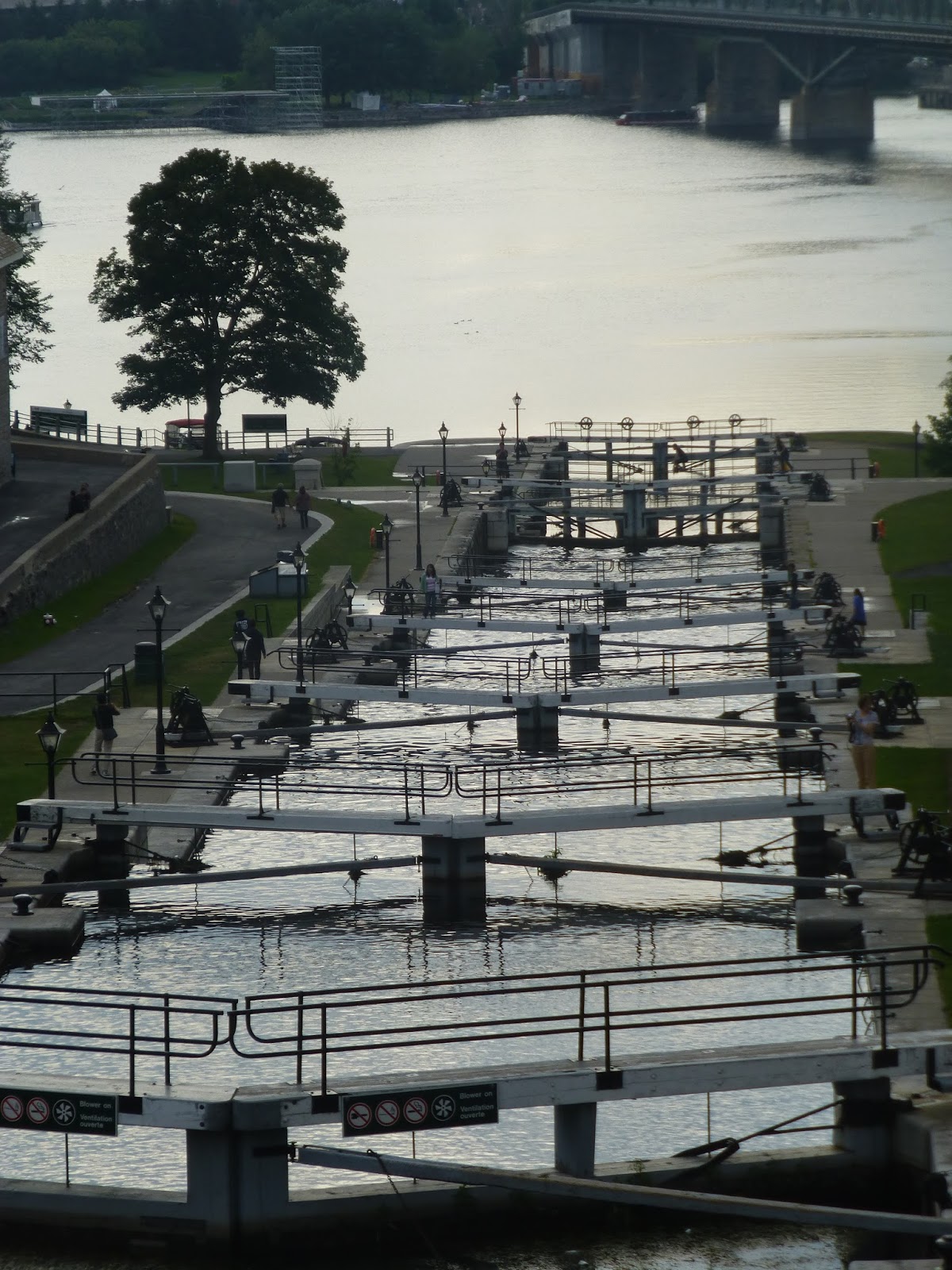 In my wanderings around Ottawa, I also found the Supreme Court just down the road from Parliament.  I did not have a chance to go inside, but I noticed signs informing that the building is open to the public and guided tours are available as well.  A friend of mine also recommended the War Museum, which is a bit removed from the main downtown but is still walking distance.  I ran out of time and will have to keep that on my list for another visit, but several different people had nothing but good things to say about the museum, so why not investigate?

On my way out of town, I drove through Gatineau Park, which is across the river in Quebec.  It is an AWESOME place for hiking and biking and general being-out-of-the-city activities.  If you have wheels to get there and are up for some exercise in beautiful scenery, get out of town for a few hours and get lost in the woods.

And there we have it!  24 hours in Ottawa!  Just a tiny snapshot of what the city has to offer, I'm sure! 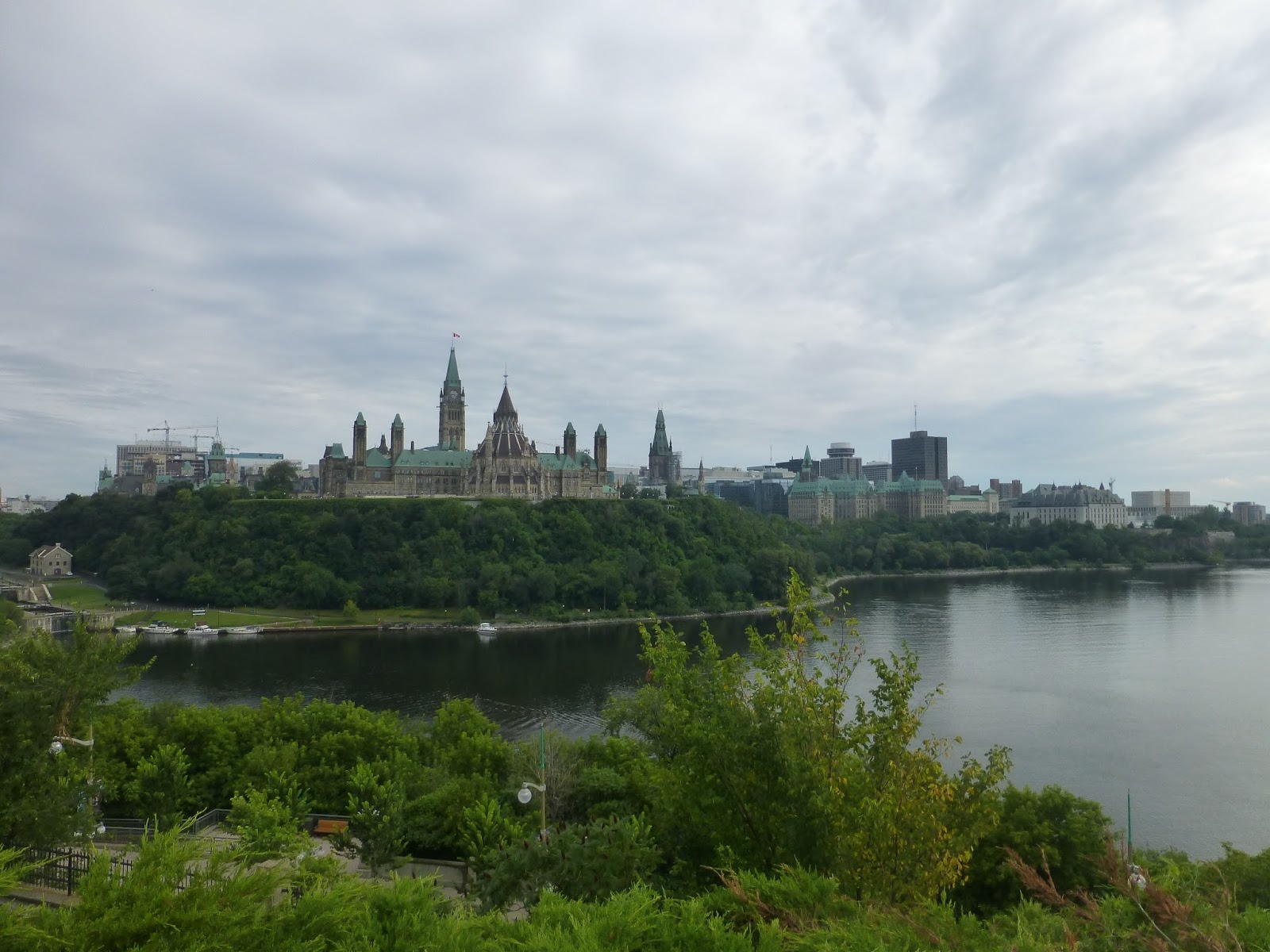 Photos taken by me and are not to be replicated in any situation.
Email ThisBlogThis!Share to TwitterShare to FacebookShare to Pinterest
Labels: Canada