It had to happen eventually for a company that is built around bringing the Special Forces experience to the rest of the world!  GORUCK has joined the obstacle course race community with GORUCK Nasty, a race based on the course that Green Berets have to complete during their selection process.  Iteration 001 took place in September 2013 at Massanutten Ski Resort in Virginia.


Here's a breakdown of the obstacles, as best as I can remember since what I encountered was not the same as the map that was provided in the race packets.  (In fact I think several advertised obstacles were entirely removed from the actual race.)  Things also start to blur together by the end of 7 hours on the course.
1) Start: Not exactly fist-pumping and heart-pounding motivation like the guy at Tough Mudder provides, but GORUCK has always been laid back and understated.  Cadre Lou's starting line style fit right in with that image.
2) Up a bit of a hill to a few rails you had to scramble under awkwardly, then a cargo net climb, and then Swing, Stop and Jump.  Pretty simple: swing on a rope on to the top of a log, and then hop off the other side.  Then down the hill to get sprayed by a fire hose and flop in the mud.  At the bottom of the hill were a couple low walls.
3) Now it all starts to blend together.  There was The Belly Buster and The Dirty Name, both hideous log contraptions.  Hurdle #1 was getting onto the first log.  Then you had to be steady enough to stand up on that log (Hurdle #2) and fling yourself into space to grab the next log up, which hit you right in the chest.  Hurdle #3 was being strong enough to either pull yourself or swing your legs around so you could scramble onto that log too, before you dropped back down to the ground on the other side.
4) Then there was a huge traffic jam at one obstacle (I think it was Six Vaults?  Maybe Under Cover?), and we waited for a while until one of the cadre came and said he was making a new obstacle.  We bear-crawled around the line to the following obstacle, Tunnel Rat.  Uphill through some very very dark tunnels, and then an extremely steep climb to the next obstacle.
5) At the top of the ski run was another huge line for what turned out to be a rather anticlimactic obstacle.  I think it was named The Pull for Life.  It was a thick rope slung between two logs, so you climbed up to the log and then pulled yourself along the rope on your belly to the other side.  However, the ropes were so stretched out that as soon as you reached the middle, you were touching the ground.  So it kind of defeated the purpose.  Was not worth the 40 minute wait either.
6) The next section involved more running up ski runs, Tough Nut (climbing over planks that were planted together in X shapes, which is where the challenge came in since it involved a bit of twisting and balancing to get your body through the gaps), and the The Gorilla Swing, your standard monkey bars over a pool of muddy water.  The monkey bars were not greased and were firmly anchored so they didn't turn when you grabbed onto them, but they were not uniformly spaced out.  And it was a bit of a leap to grab onto the first one, which led to some hilarious wipe-outs!
7) After a very long trek straight up to the top of the mountain was The Wobbler.  The wait for this crazy obstacle was over an hour long, but it was the first really technical cool one, so wait we did!  The Wobbler required a lengthy rope climb (there was a tiny ladder for those of us with insufficient upper-body strength) up and over a log and onto a rope net.  Then an awkward push-crawl down a log and onto a very shaky ladder, and finally a drop of several feet onto a squishy blue mat.
8) We ran back down the mountain, did a low-crawl under barbed wire, then the Memorial Mile straight back up a ski run carrying a little American flag and thinking about all the troops serving overseas and who have given their lives there.
9) The Mogadishu Mile brought us back down the mountain indirectly to Easy Balancer, which involved a series of three progressively higher logs that were basically balance beams, except they wiggled a lot.  Then a couple inclined walls, and of course you had to climb up from the side that was leaning towards you.
10) The race ended with three tough obstacles.  First was The Weaver, an A-frame of planks that looked like an easy ladder obstacle, until you realized you had to weave your body over and under every other plank instead of just scrambling to the top. 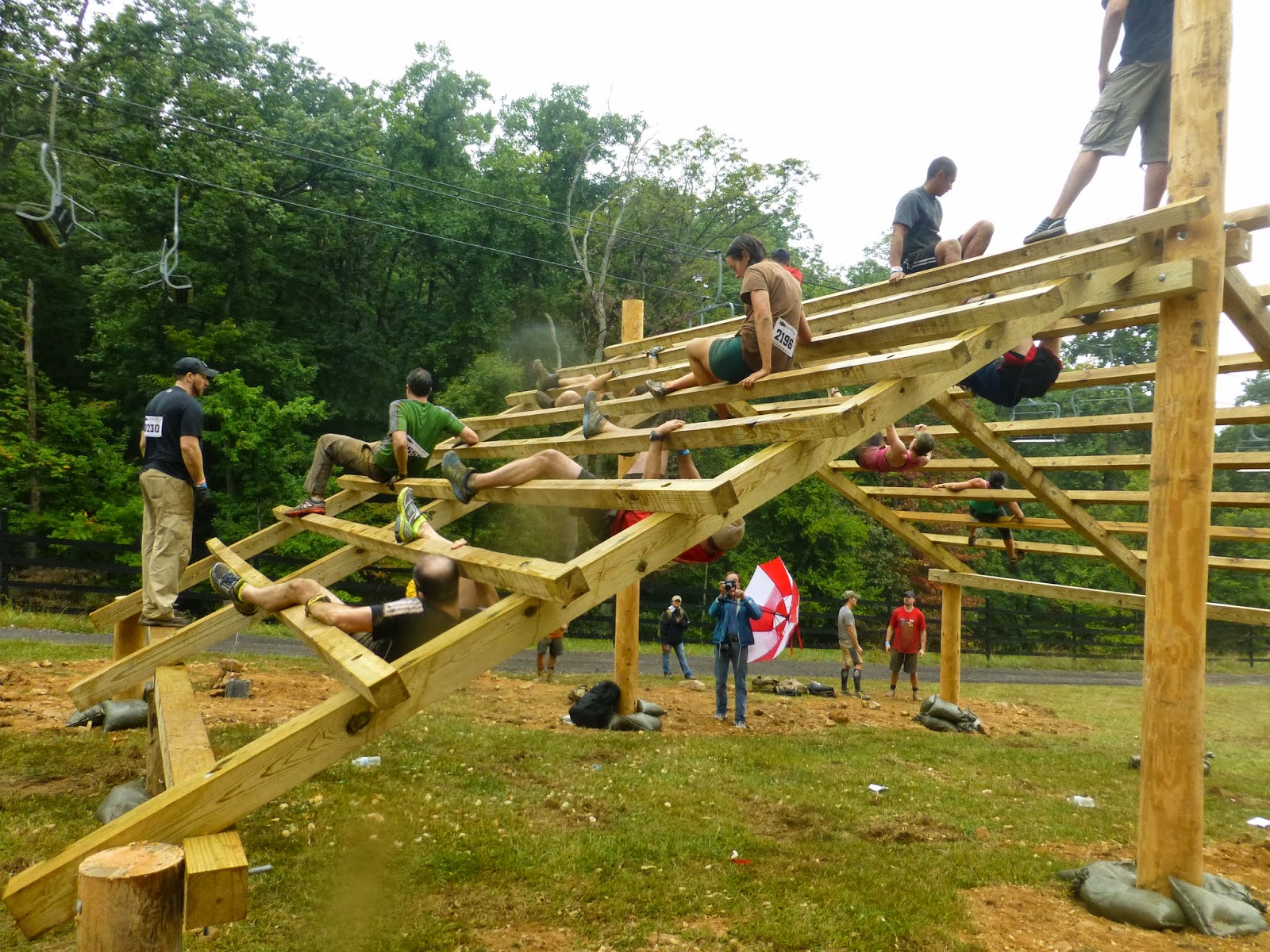 I was quite thankful for my long, strong runner legs which pulled me through!  (They paid the price too, with the most spectacular bruising I have ever experienced.)  Then Confidence Climb, which was basically a fence.  Except it was 32 feet high. 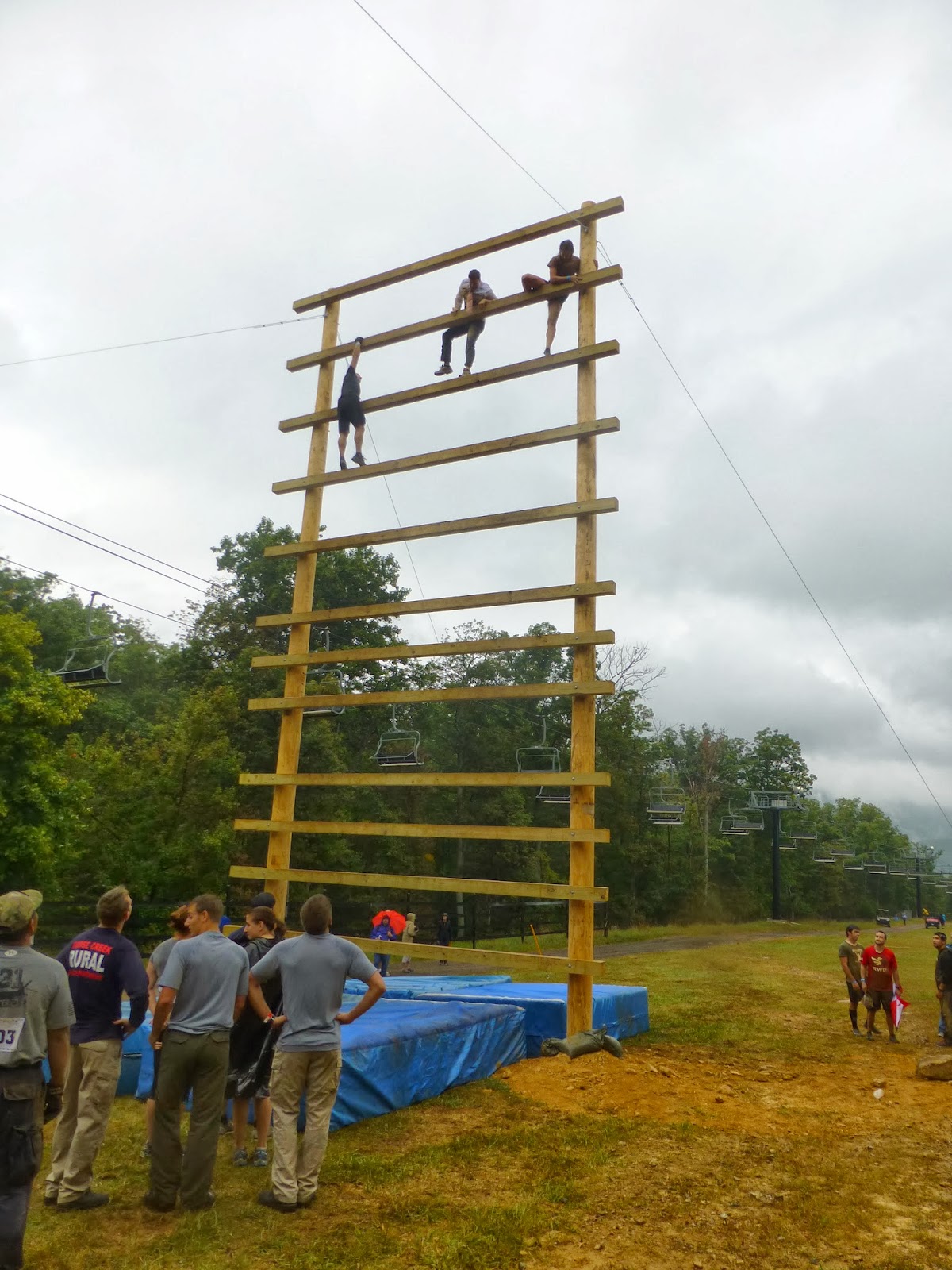 The slats were unevenly spaced, so it was easy to climb between a few of them, but others required a serious stretch.  Especially towards the top!  That obstacle was a bit of a gut check.  And then the final obstacle, The Tough One.  Darn those rope climbs (and thanks for the ladders so folks like me didn't have to skip it!), and then a gut-check for those with a fear of heights as you traversed an open lattice of planks to a ladder on the far side which took you even higher into the air, at which point you had to scramble over a log onto a rope ladder and climb alllll the way back down to the ground. 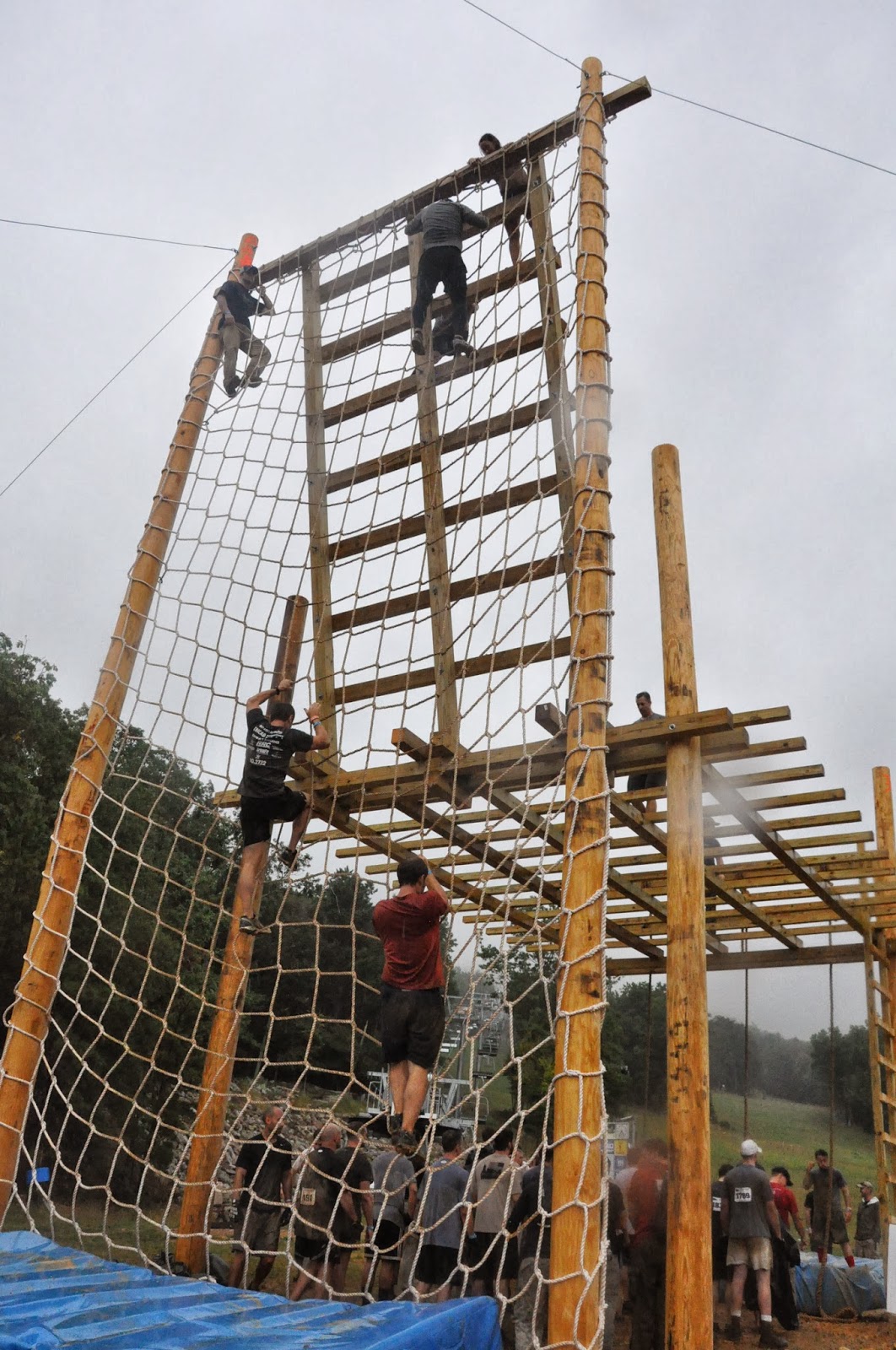 11) Final downhill grassy sprint to the finish!  And then ... beer!

The worse thing about Nasty: lines.  Because many of the obstacles were quite technical and only two or three people could be working on them at a time, the lines became ridiculous.  Because of these jams, a course that should have taken maybe 2.5 hours to complete turned into a 7-hour event.  Better monitoring of the numbers in each starting wave, or more spacing out of the technical obstacles, or making them bigger to allow more people on at once .... GORUCK definitely needs to work out something to create a better flow and prevent the traffic jams at the next Nasty.

I also liked that the cadre were scattered around the course providing assistance or tips or general heckling.  One guy gave me a leg up on The Belly Buster, which ultimately didn't help me out very much since I would have needed another boost to get onto the top log!  But the point was that I tried, he saw me struggling, and my concerted effort earned me a boost.  If I'd just walked around the obstacle without even giving it a shot, there would have been a punishment (burpees, supermans, something not fun) waiting for me.  Another cadre sat on top of The Weaver and provided really good, detailed instructions on what limbs needed to go where to safely get me back to the bottom.  A third guy was on top of The Tough One waiting to lend a hand to those who weren't confident about stepping over open space on the lattice.  I thanked one cadre for his explicit instructions on how to get over a very high obstacle and safely onto the descending rope net, and he joked that he'd perfected his phrasing on the 400 people who passed through before me.

Curiously, although the cadre were around and really helpful, there was not as much camaraderie and support between race members as you find at most events like this.  At one point, a girl made it all the way to the top of the rope climb on The Wobbler, and then she got stuck.  She was too fatigued to pull herself up and over the log and onto the rope net for the next step.  Then some guy climbed up the ladder and instead of going over to giver her a hand, he walked right past her and climbed onto the log and shimmied away.  The crowds of us watching this from the ground were pretty upset.  It's not a pride thing at this point; she already proved she could climb the rope, and she'd been clinging to the top of it for several minutes!!  Give a fellow racer a hand!  Finally someone else who was already on top of the obstacle went back to pull her up.  There were a few exceptions (I had one awesome guy in a bright red shirt coaching me through the monkey bars) but overall, I was surprised and disappointed in the other racers.

All in all, it was a bit of a mixed bag between expectations and results.  The course was good except for the traffic jam issues as the bigger obstacles, but I know GORUCK actively sought feedback and will do everything they can to make 002 better.  I'd do another.  $1 beers and bonfires (in the rain .... darn you, uncooperative weather!) at the end were great, and I seriously loved the obstacles.  Even when I was 32 feet up in the air balancing on the top of a giant fence with no way to go but down, and wondering how exactly to make that happen without killing myself ...

Photos not for reproduction, thanks.
Email ThisBlogThis!Share to TwitterShare to FacebookShare to Pinterest
Labels: America, obstacles