Quebec City is beautiful.  You really do feel like you're in an old European city, not only because of the architecture but also because of the language.  I was so happy to realize that I could really truly feel like I was in a foreign country just a few hours from home!  (Europeans probably laugh at this concept ... but it's a bit of a hike to get out of the country when you live in North America!)  I was also happy I had two French-speaking friends to help me out since French is one language with which I have zero background, and it made getting around easier since we hurdled the language barrier with no charades or bad attempts at accents or terrible pronounciation. 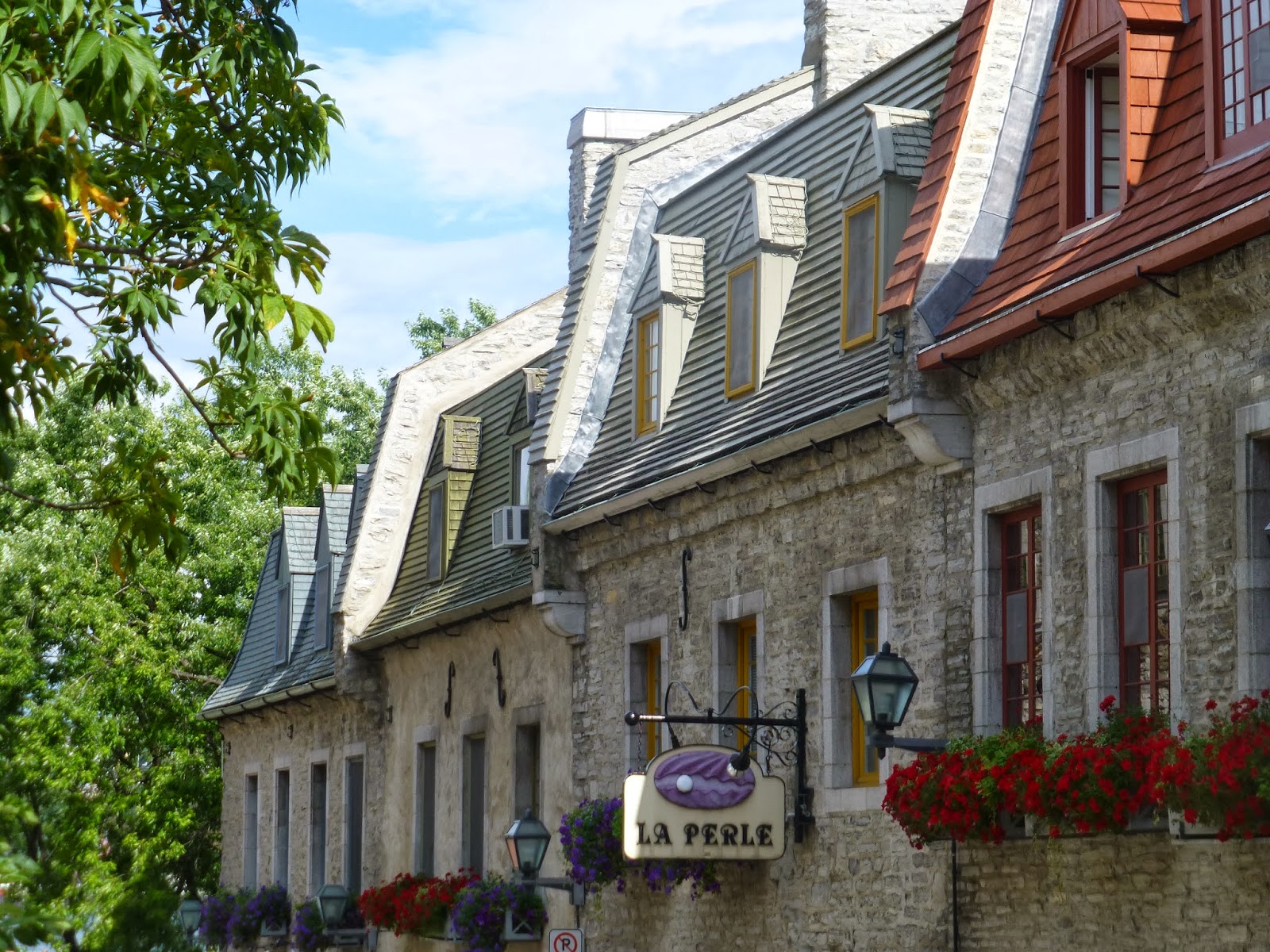 The main must-do in Quebec City is to tour Old Quebec.

Old Quebec resides inside the historic city walls and clings to the cliffs that slope down to the St. Lawrence River.  The Upper Town has bundles of shops and restaurants on cobbled streets that run together with wild abandon, evoking the jumbled quaint chaos of old-world Mediterranean towns.  The Lower Town is narrower and more crowded because it is pushed right up against the cliffs.  Old Quebec is dominated by Chateau Frontenac, a massive castle that towers over the whole area.  It is now a luxury hotel, but its grey stone and domineering turrets add a fairy tale quality to the town.  The old city is a fantastic place to just wander around, delighting in the colorful buildings lining the street and absorbing the variety of humanity that fills the sidewalks.  The various town squares are usually crowded with tourists watching buskers perform acrobatic feats and munching on poutine, a delicious heart-stopping concoction of French fries, gravy, and cheese curds.  Trust me, just try it.  And if you're feeling a tad lazy and the stairs between the two parts of the city are a tad daunting, there's a funicular that traverses the cliff between Lower and Upper Town. 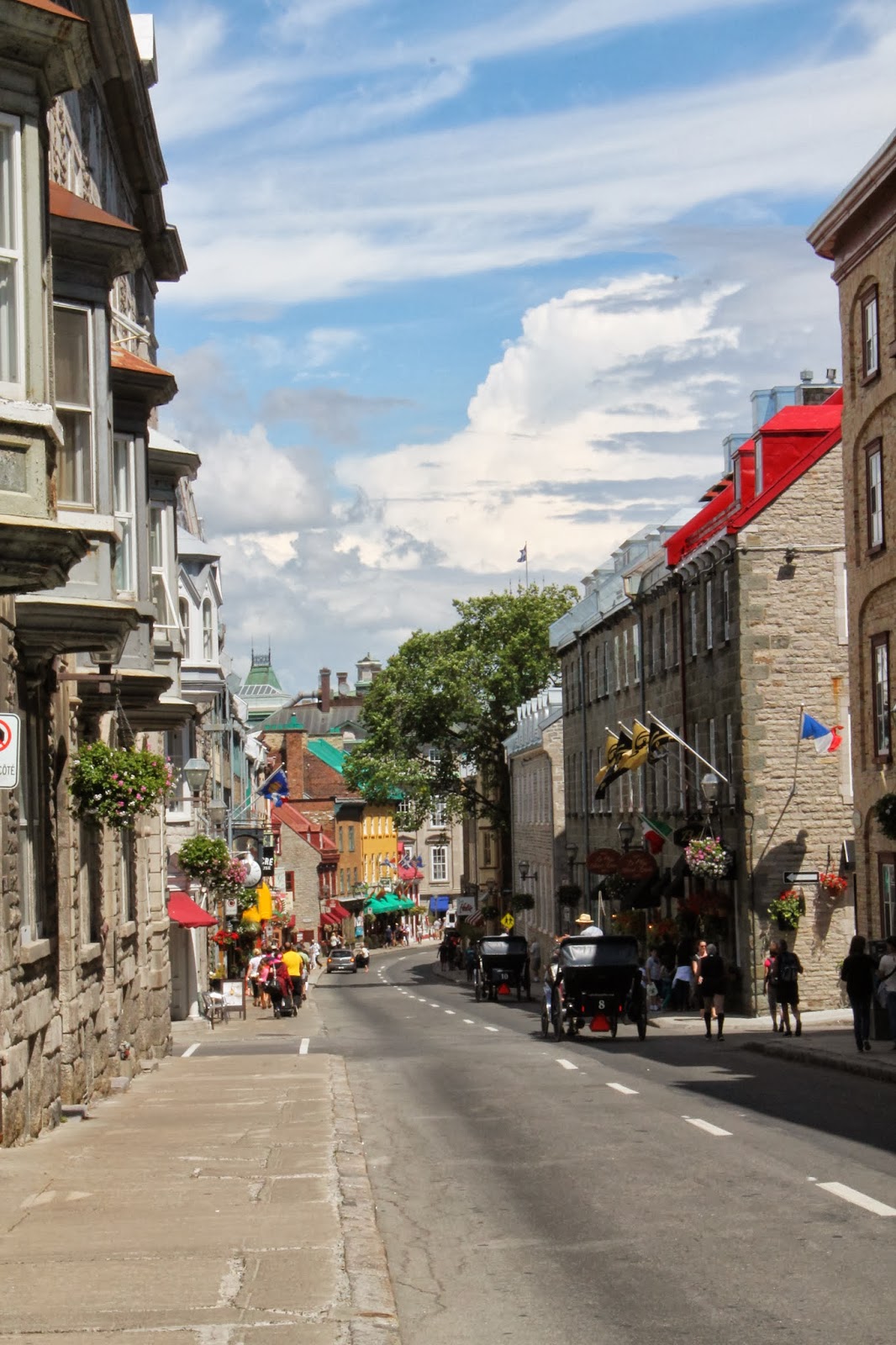 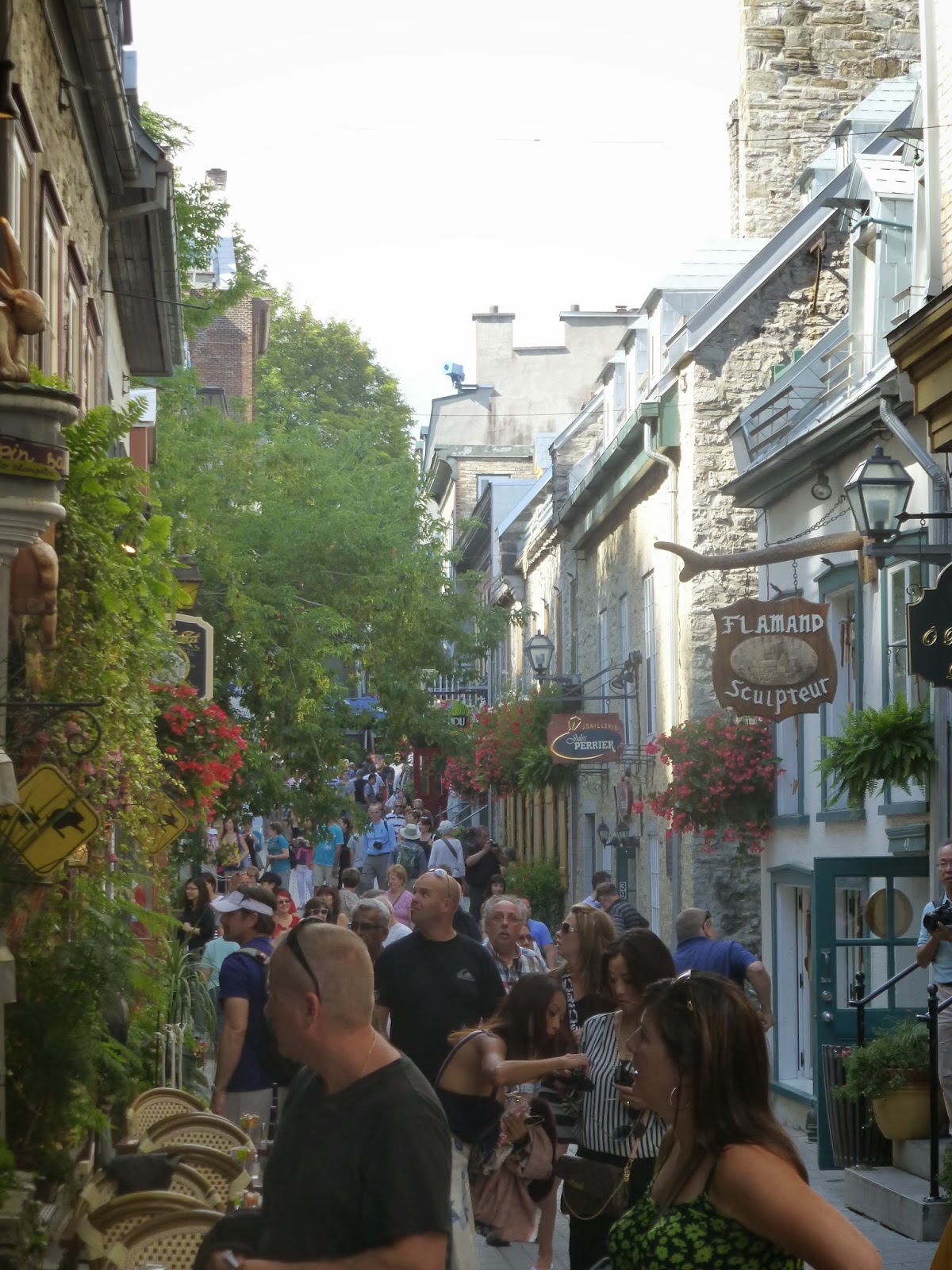 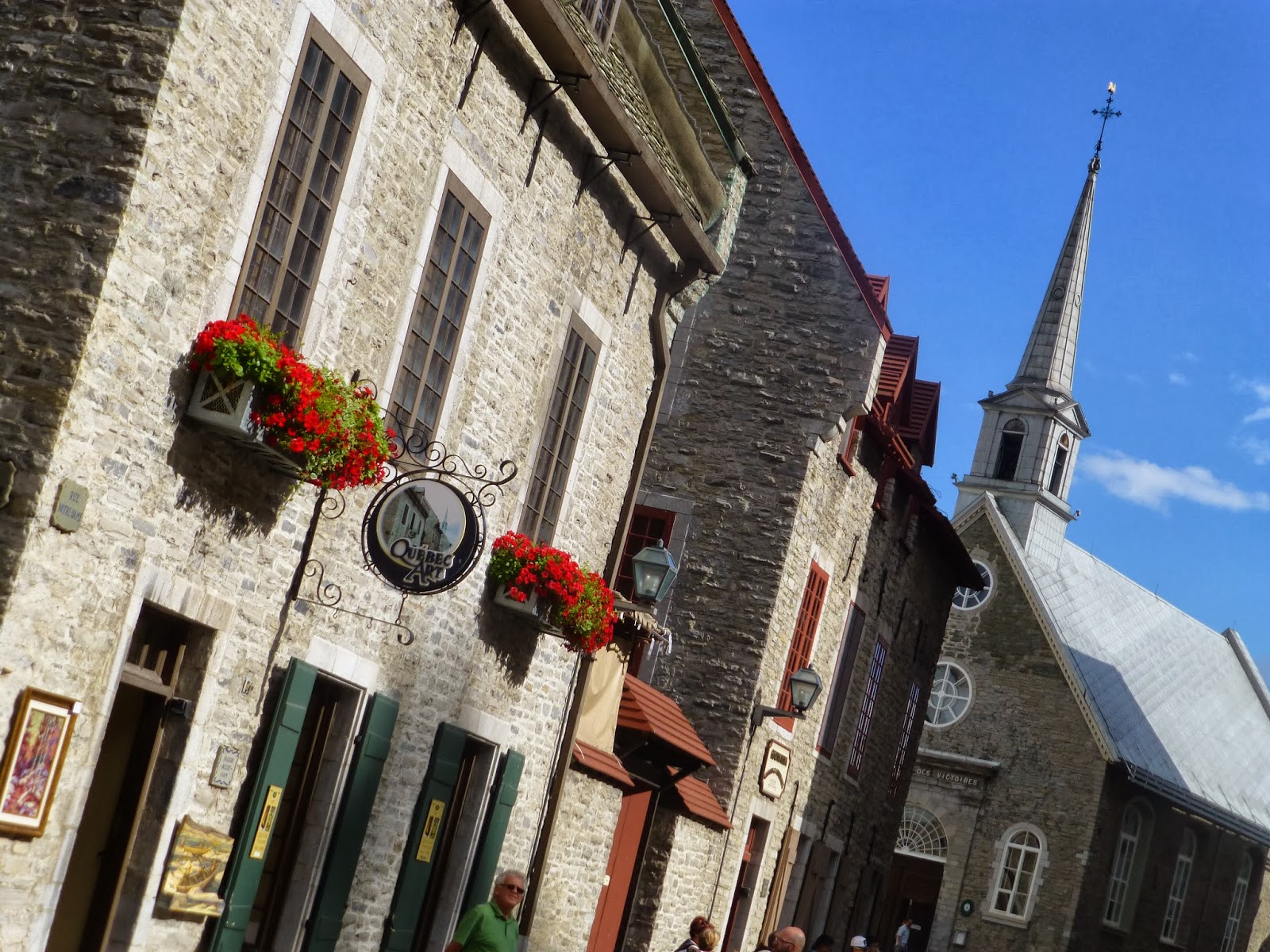 The Citadelle of Quebec is part of the old city's fortifications and sits on top of the cliffs, commanding amazing views over the old city and the St. Lawrence River.  The Citadelle is an active military post, so you can't have free rein to wander around (unless you're with a military person .... which will result in tour guides chasing you across the parade ground because they think you're wandering off to get in trouble away from the tour group).  But tourists can pay a small fee to observe traditions such as the daily Changing of the Guard, which involves soldiers wearing the traditional red jackets and giant poufy black fur hats most famously associated with Buckingham Palace.  Also, there is a goat.  I don't know the entire history if the goat; according to my friends, it was a gift from the Queen.  It's got gold-painted horns and a very fancy halter and gets to march around the parade field with the guards and pose for photos. 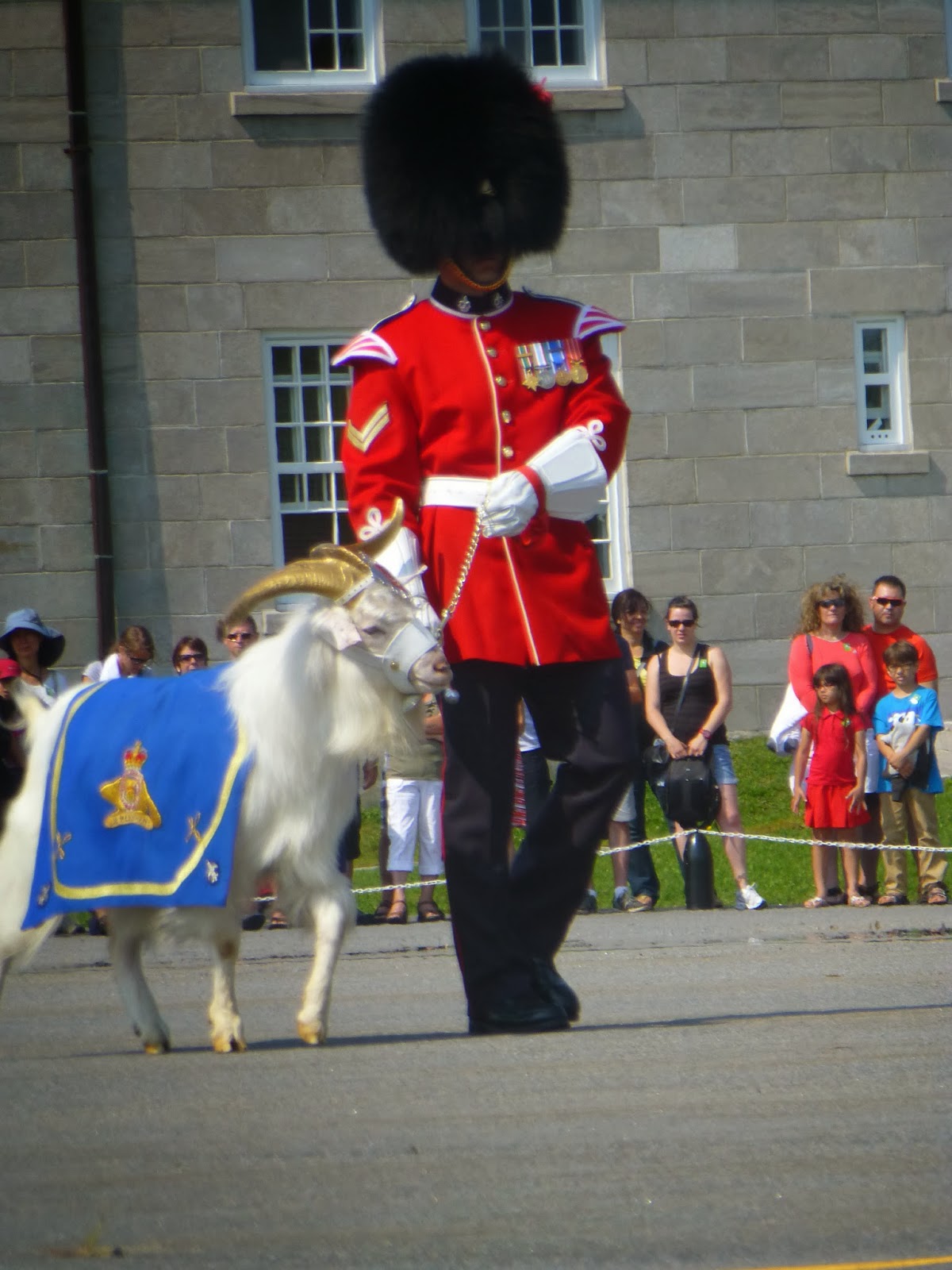 When you tire of Old Quebec (it will never happen, but anyway), continue uphill and out through the fortification gates.  The road, Grande Allee, leads past Quebec's Parliament and into an area full of restaurants, cafes, and bars.  Many of the places have outside patios with umbrella-covered tables in the summer.  I was told the entire street is jammed at night and it's home to some of Quebec's hottest night spots, but all I can say is that on a warm summer day, it was a lovely place to stop for a beer!

If you have the means to get out of the downtown area, or are adventurous enough to rent a bicycle and pedal upriver on the extensive and awesome bike trails, take the opportunity to see Montmorency Falls!    It's only a 12 kilometer ride, easy as pie!  Montmorency Falls are where the Montmorency River joins the St Lawrence, and it's actually taller than Niagara.  Not quite as wide, but impressive in its own right.  It's just over 400 steps from the top of the falls to the bottom, and you can enjoy the changing rainbows in the mist on the way down.  At the top is a fancy little tea house and also a small museum about the Falls.  There's quite a lot of parkland around the Falls too, so its another fantastic summer spot to hang out and enjoy the scenery. 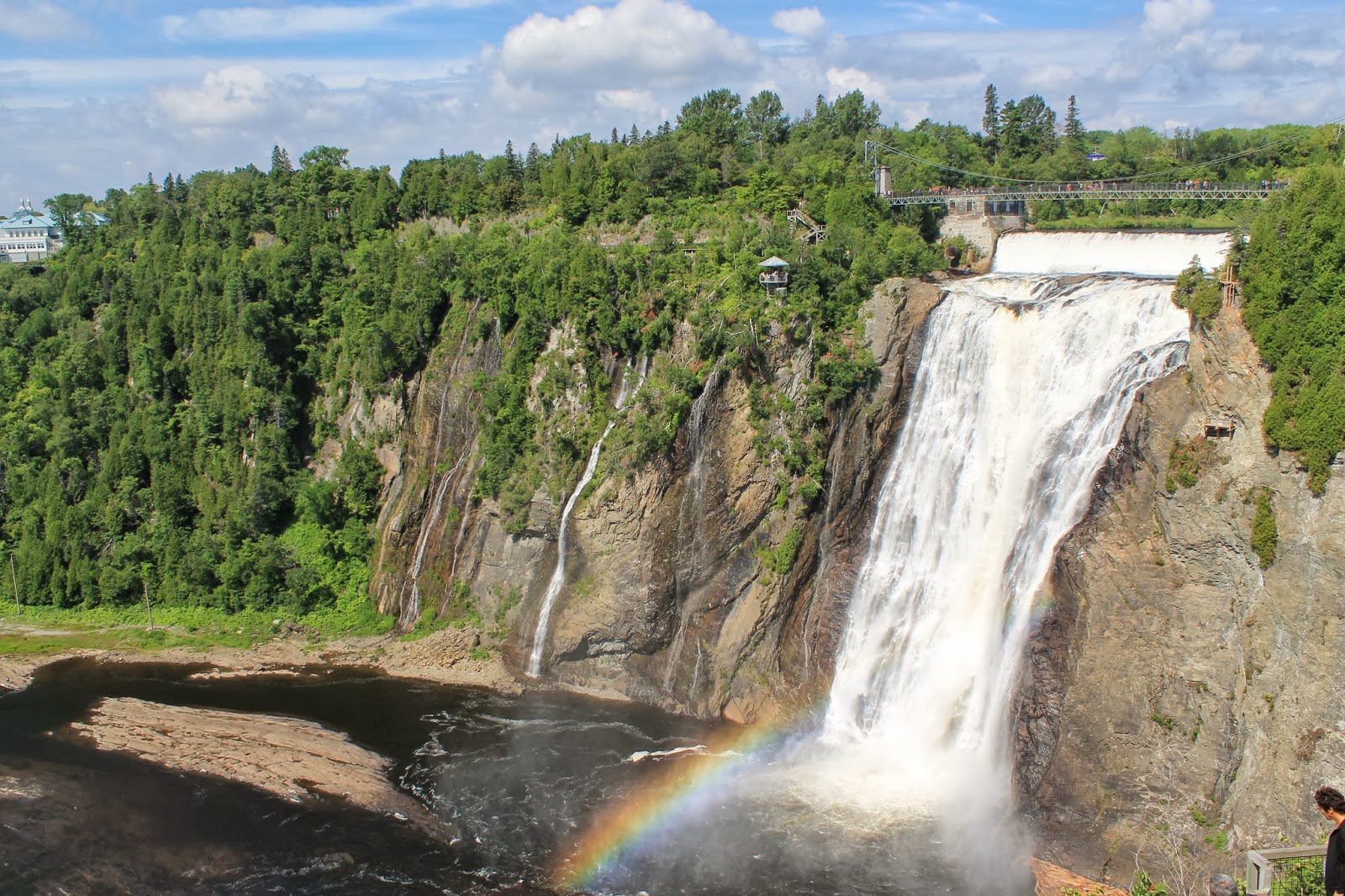 So there you have it!  Quebec City has so much more to offer, but if you've got a day, these are the highlights.  Enjoy!

Photos are my property, not available for reproduction or any other use without my permission.  Thanks!
Email ThisBlogThis!Share to TwitterShare to FacebookShare to Pinterest
Labels: Canada