There is a blizzard raging outside.  I already went for a run in it, so now seems an appropriate time to hunker down with a cup of tea and write about Ice Marathon gear!

I started experimenting with my layers a year ago, and was surprised to discover how very little is required to stay warm and toasty while running in really cold weather.  Of course, I was not training in Antarctica or anywhere with comparable temperatures, so I was still a bit nervous when I received the gear list from Richard.  Running tights and wind pants?  That's it?  Regular trail running shoes??  No freaking way!

But the reality is, yes freaking way.  In fact, I overdressed!  It wasn't super critical since we looped back through camp once and were closely monitored by the staff the entire time, but wet clothes turn into frozen clothes and unless you have a place to warm up and dry off (thank goodness for the shower after the race, and the dining tents!), you're toast.  The guides liked to remind us often: You sweat, you die.

So, let's start from the ground up. 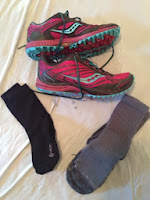 That's it!  Not a snow boot in sight!  My feet were comfortable for the entire race.  I changed the outer sock layer at halfway, just in case, although the socks weren't even damp and it probably wouldn't have made a difference.  The grip on the shoes was good in the slippery snow, and the canvas over the toes was all I needed for wind and wet protection.  No blisters, no hot spots, and I didn't lose a single toenail.  Happy feet. 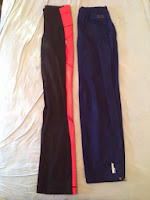 Wholly appropriate name for the running tights, eh?  :)  We were advised prior to departure from Punta Arenas that it is possible to get some chapping or frost nip on the upper thighs if your layers aren't sufficient.  And guys have to be even more careful.  My layers worked out well-- the tights were warm enough and the wind pants did their job, so when I finished the marathon, my thighs were no redder or chillier than they've been after any other cold run I've done. 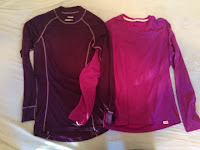 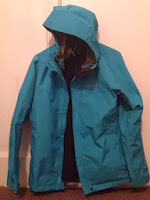 Here's where I went a bit overboard.  I did the first half of the race in the Craft base layer with the fleece and windbreaker, and I was soaked.  When I took off my windbreaker, my fleece was entirely coated with frost.  I changed into the Patagonia base for the second half of the race.  Perhaps two base layer-type shirts instead of the fleece, or a thinner fleece, would have been better.  Next time!  The wind breaker was fantastic.  And I even forgot it had venting zippers under the arms, which would have been helpful for controlling my body temperature!  But the main idea was to keep the wind at bay.  We didn't have too much of a breeze to contend with during the marathon, but I wore it a few other times around Union Glacier, including on the cross country ski outing which was a very windy day, and the jacket was great.  Two thumbs up. 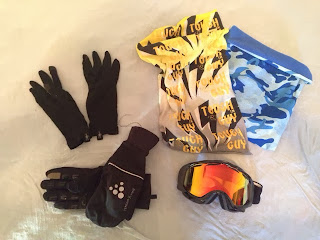 These were the articles of clothing that needed the most adjustment.  I was extremely paranoid about getting frost bite, so I kept my face mask and goggles on for the entire race.  The goggles fogged up and then froze, which was frustrating, but my eyes would have been watering like crazy if I'd worn sunglasses, so frozen goggles were the lesser of my two evil options.  The face mask kept the wind at bay, but also completely froze, which ultimately scraped the skin off the bridge of my nose where the goggles mashed into the frosted fleece.  The neck buffs were great.  I wore the camouflage patterned one for the marathon because it had fleece in it too, which turned out to be a tad too warm.  The other buff is the single item of clothing I am most glad I had along in Antarctica, and it was a last minute add to my packing!  I wore it constantly because it worked as an ear cover and hair controller and neck warmer and it wasn't too bulky.  Thank you Tough Guy for randomly sending it to me in the mail years ago!

Hand temperature control is a tough thing for runners.  In regular life, my hands are usually cold.  A mile or so into a run, though, they are quite warm and I usually wish I didn't have gloves on by then.  So I decided to go with just these two layers for the marathon and forgo the massive expedition mitts.  Excellent decision!  My hands were blocks of ice at the start and burning painfully through the first mile.  I was worried that I was going to need those giant mittens, which were waiting for me at the first checkpoint, but fifteen minutes later I was perfectly comfortable.  The wind mitten on the Craft hybrids was fantastic, because I could just flip it off and let my hands cool down a bit.  When they started to get chilly, I put the mittens back on and was good to go.

I figured that if I was really cold at the start of the race, I'd probably layered myself appropriately.  And I was freezing.  Took two miles to get comfortable.  I'll have to tweak a few things next time, but mostly Richard was right!  This is all it takes to run a marathon in Antarctica!
Email ThisBlogThis!Share to TwitterShare to FacebookShare to Pinterest
Labels: Antarctica, marathons, running