The National Three Peaks Challenge: within the time limit of 24 hours, you must summit the highest mountains in Scotland, England, and Wales.  And that 24 hours includes travel time between peaks.  Who comes up with these crazy ideas?  And why do so many crazy people then jump onboard to make it happen?

Ah well, pot kettle.  I don't come up with the ideas, but I always think they're brilliant.

I don't have a clue where the Three Peaks Challenge came from, and the omniscient Internet is remarkably silent on that account as well.  I first heard about it from someone at some point in England (how's that for vague?).  I wasn't much of a hiker or climber back then, but I will always pounce on any excuse to go to Scotland and I had not yet been to Wales, so I was immediately keen.  And fortunately I usually have one friend in the immediate vicinity with enough screws loose to join me! 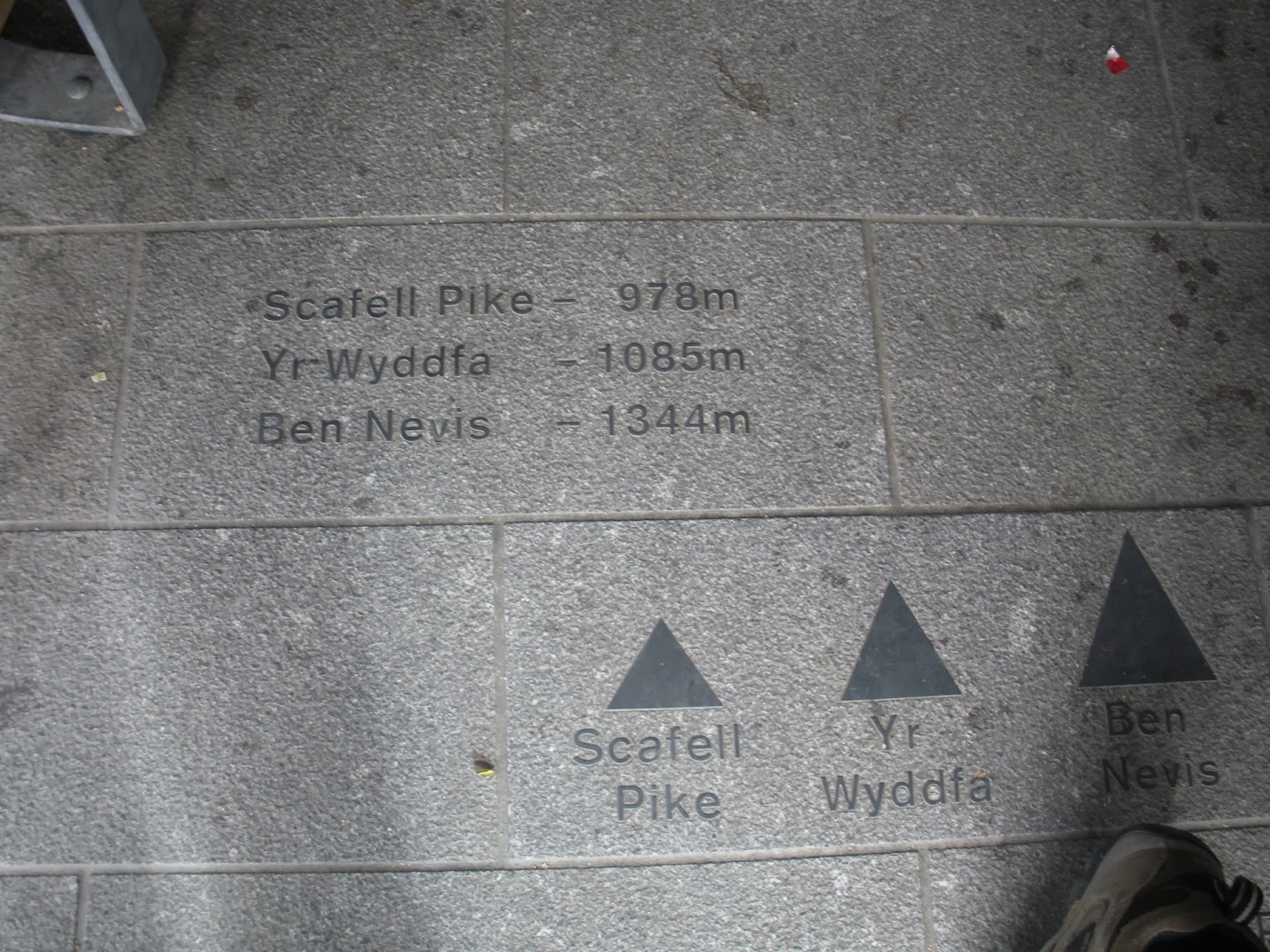 We did a bit of research and decided the best route starts with Ben Nevis, then heads south through Scafell to Snowdon.  Ben Nevis is Scotland's tallest mountain, and the tallest in the British Isles, at 1344 meters.  It's near Fort William in the Lochaber area of the Highlands.  It's also the toughest hike, so we figured we'd rather do it when we were fresh.  Then it would be six-ish hours to drive to Scafell Pike, England's tallest peak at 978 meters, in Lakes District National Park.  Scafell is short, but very steep.  Then four hours to Snowdonia National Park in Wales to climb Snowdon, 1085 meters high but the gentlest climb of the three.

So on a regular ole weekend in June, my Three Peaks Challenge kicked off with a road trip from southeastern England to Scotland.  England is beautiful ... in a manicured, civilized, settled way.  My soul prefers places that are wild, and empty, and formidable, and beautiful.  (Antarctica, anyone?)  So I love Scotland.  We approached Fort William in late afternoon on a two-lane road devoid of traffic that wound through heather-covered flats sloping into grand peaks looming against the fiery sunset sky.  As dark settled, we entered eerie dark woods along the shores of the loch that guide you straight to the awesome town of Fort William, an outdoor adventurer's haven.  Not that there was time on this trip to enjoy it-- sleep was the only agenda, since hiking had to start before the sun came up in the morning!

﻿
We started our Ben Nevis hike bright and early before the sun was fully up.  We didn't have trail maps or any sort of guidance, which was not an issue at all.  We (fortunately) correctly assumed that the trails would be well-marked on each of the three peaks because of the popularity of this ridiculous challenge.  It was a gorgeous June day perfect for climbing some mountains!  The only thing was, I felt like we were racing.  I mean, technically we were because of the whole time limit thing, but I also wanted to enjoy the hike!  The first hour or so was quite steep and rocky and crowded and was in many places basically a rock staircase carved into the side of the mountain.  Then the path leveled out on a beautiful grassy knoll with a surprise lake tucked into a crease in the hill.  Quick snack break and onward we hustled.  The view was gorgeous down into the valley and towards Fort William, but before too much longer we entered the cloud that so often sits on top of Ben Nevis.  The terrain also became extremely rocky, but the path was fine until we hit the snow fields.  Yes, in June there was still snow on top of Ben Nevis.  We very briefly considered turning around at this point, since we hadn't brought any special gear or even that much additional layering.  But we knew the summit was close, so we awkwardly scrambled through the snow until we were on rock again, and continued upward in the dense fog.  The summit has some decaying rock structures to announce that you've made it, which is useful when you cannot see anything more than ten feet away because of fog.  It was super windy, very chilly, and I was so relieved I made it all the way to the top!  Of course I had to survive the reverse trip as well, but Ben Nevis was my first real hike and it was not easy and my legs were knackered.   I was proud of myself!


The return hike was uneventful; delightful to escape from the fog and get progressively warmer and warmer as we worked our way back into the valley.  It was positively balmy by the time we got to the bottom and found the car to hit the road to Peak #2.  19 hours left!

﻿
Driving to Scafell took FOREVER.  That was partially because our driving assistant did not live in the UK and was not nearly as comfortable with right-side steering as my friend and I, but we were trying to catch up on some sleep!  Little tiny country roads don't exactly boost shaky confidence either.  And by the time we made it to the Lakes District in the late afternoon, it was raining cats and dogs.  And horses and cows and sheep.  And a few whales as well.  We found the trailhead for Scafell, but we had to take a bit of a logic check.  There was NO way we were making the 24-hour time requirement after our extended drive from Scotland.  My grandmother was along for the trip and she wasn't having fun anymore -- too much time in the car, and we were only a third of the way finished!  And the monsoon downpour would have made the hike dangerous for us, since we weren't really sure of the path and it would have been getting dark by the time we were coming back down.

So.  What to do?  Find some dinner and a B&B and reengage the following morning.  No true Three Peaks Challenge for us, but that didn't mean I wouldn't still be summiting all three of those mountains!

﻿
The following morning dawned clear and beautiful.  And since we were right there, we decided to climb Scafell Pike.  Just the drive to the trailhead was gorgeous, through sheep fields and fern-filled glens and everything was green, green, green.  That's what we trekked through for the first bit as well.  Then, there were steps.  Steps and steps and steps.  I should have counted how many stone steps we climbed.  My legs were already sore from Ben Nevis; they were like noodles after the steps!!  And then it got worse!  The last 45 minutes (ish) was across a field of rocks that were like a giant chewed them up and spit them out.  I have to admit, I don't really enjoy hiking across that type of terrain.  I don't mind ascents and descents, but I don't really like constantly scrambling over giant boulders.  But we made it.  And, of course, it was totally worth it.  As I said, Scafell is steep.  And it provided a fantastic vantage point over the Lakes District.  There were other lakes suddenly visible in the valleys farther on from our peak, and we had an amazing view over the lake and green forest and sheep meadows by the trailhead.  Even better, it was totally clear!  No clouds in sight, and not even much wind!  We were so lucky.  And I'm so glad we didn't attempt to hike in the rain; the odds were darn good I would have finished with a broken ankle from slipping on one of the boulders or one of the stone steps in that downpour.  Two peaks down!

﻿
We headed home after Scafell.  My friend and I could have continued, but we had to think about our passengers too and they were wiped out from the crazy road trip.  Wales would have to wait.

It didn't have to wait long.  In September, another friend and I made one heck of a day trip to Wales to climb Snowdon.  We left way before the sun came up to drive to Snowdonia National Park.  I slept a bit, but I was glued to the window once we were in Wales because it was beautiful.  The road would follow a river through a forest and then we'd round a bend and find a really cool little town hugging the banks, and then ten minutes later we'd pop out of the woods into open fields with mirror lakes and vistas of the mountains in the distance.  I would love to run or ride there!

﻿
We arrived at the foot of Snowdon early in the morning, but the parking areas were already completely crammed by that time.  We parked further along the road and trekked a mile back up to the actual starting point.  Snowdon has several trail options, some of which are steeper and more technical.  We did not climb the ridgeline, but chose to go up along the Pyg Track and back down along the Miner's Track.  It's a gorgeous walk the entire way as you slowly work your way up from lake-level along the side of the mountain.  There is a train that you can take to the summit of Snowdon (cheaters!!) so there are way too many people at the peak and it's hard to find a quiet place to sit down, catch your breath, give your legs a break, and absorb the fantastic view.  I once again was lucky to hit the summit on a day where there were no clouds, but the hordes of train-riders really diminished the summiting experience.  We didn't stay long, since we could keep enjoying the scenery as we worked our way back down the mountain.  The crowds really thinned out after the first lake, so it was just us and the greenery and the rocks and the occasional sheep until we got back to the parking area.  Long day, but lovely day.  Minus the fact that for some mysterious reason, I completely lost my voice on the drive home.  Co-pilot is supposed to keep the driver awake, but I couldn't talk at all!  Fail.

﻿
Alright, so I didn't do THE Three Peaks Challenge per the guidelines, but the challenge inspired two excellent road trips around the British Isles and introduced me to serious hiking.  Snowdon was the most enjoyable hike on the whole, Ben Nevis was the most satisfyingly difficult, and Scafell had the worst terrain but was still totally worth it for the view.  Such different peaks for such different parts of the island.  Perhaps one day I'll go back and attempt that 24-hour thing again.  Who's in? 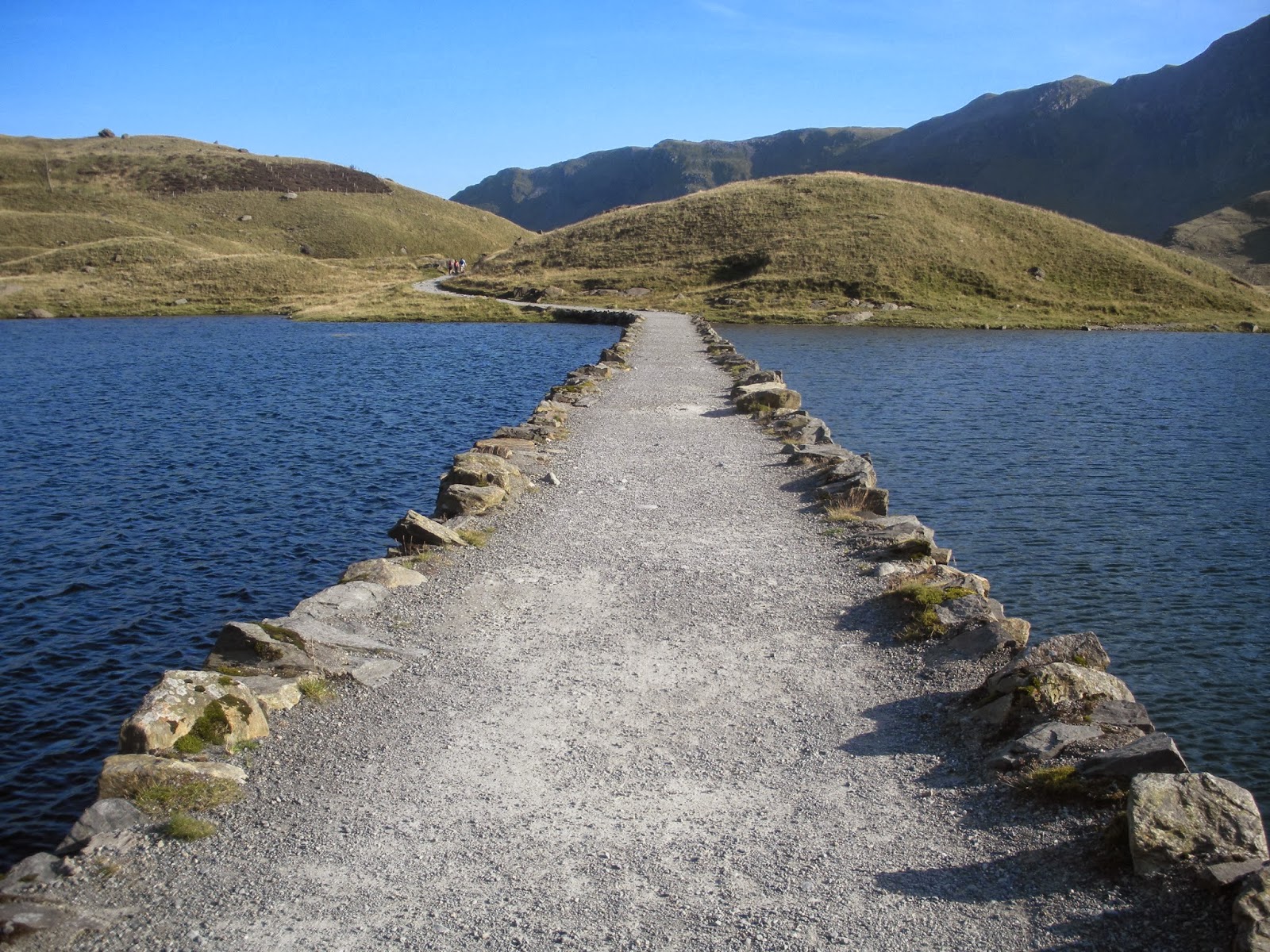