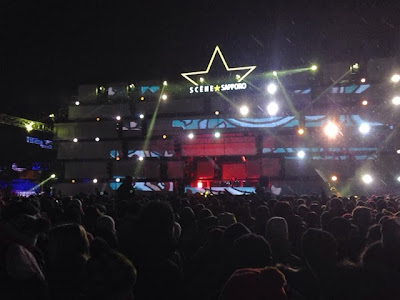 The extremely last-minute nature of my trip meant that I did not have a ticket, which several reviews online recommended purchasing in advance.  (Of course it was also cheaper to get them online.)  So I made sure to show up right at 7pm when things kicked off, which turned out to be an over-reaction on my part since there were no lines or crowds and I waltzed right in.  (Haha.  Waltz.  Can one waltz to EDM?) 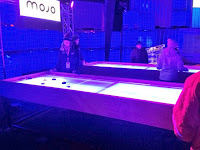 At 7pm, there were only about twenty people dancing at the main stage.  But I was pleasantly surprised to find lots of things going on to keep me entertained until the massive crowds arrived as things started to pick up.  There was a marshmallow roasting pit, and a big ice slide, and a Guitar Hero-style drum game, and miniature curling (shuffleboard on ice!), and a hilarious four-person "ski" game. 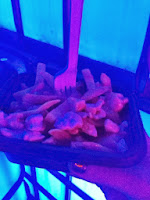 I got my poutine dinner and wandered around laughing at everyone trying to succeed at these hilarious games.  By the time the second DJ came on at 8:30, the crowds were definitely arriving en masse.  And by the time the final DJ started at 10:30, it was a madhouse.  The pier was jammed with thousands of people swaddled in snowsuits and ski pants and marshmallow jackets dancing in a snowstorm dazzled with lasers and strobes.

I'm sorry!!  I like some of it!  In small doses!  Like, one song at a time!  But I really really really prefer dancing to music that has words.  And a kickin' bass.  Neither of which are common in EDM.  Actually I was kind of surprised about the bass thing.  Anyway, the DJs were top notch and I had fun and I'm glad I went, but five hours was a massive overdose for a first time.

2)  If you're going to attend an event like this alone, it is WAY better to be a girl.

There were several other loners wandering around the pier too, hovering somewhat awkwardly on the fringes of the knots of people that showed up in posses with their friends.  The loner girls just started dancing and got absorbed into the crowds of people.  The loner guys didn't quite have it so easy, because no matter how innocuous they were, they creeped people out.  Groups of girls looked at them askance and closed ranks.  Groups that included guys looked at them askance and the guys ran interference to keep the loners away from their girls.  And groups of all guys didn't want any more competition.

You might think that being a girl and alone would invite all sorts of unwanted attention, but it wasn't a problem.  I guess EDM lends itself to jamming out on your own, because that is what literally everybody was doing.  Go with the flow!

I am usually the instigator among the people I know.  I make the suggestions, I make the plans, and when we actually get around to doing things, I then spend all my time worrying about whether everyone else is having fun!  So oh-my-goodness was it liberating to not spend a single second mired into that realm of thought.

There's also the whole introvert thing.  It takes us a while to warm up to a place, to get in the mood to dance.  We like watching people.  Just because we're not doing a lot of talking and not instantly getting crazy doesn't mean we're having a miserable time!  So at the same time that I wasn't having to worry about anybody else, I also didn't have anyone misunderstanding me and constantly checking up that I was having fun too.

Win-win!  It was SO much fun to completely do my own thing and not give a damn about what anybody else thought (especially of my dancing).  And when that point in the night came when it was so crowded that I turned into a human ping-pong ball getting arbitrarily tossed around in the crowds, I left!  So simple!

Seriously, try it sometime.  You've got three more weekends to rustle up the most neon-tastic snowsuit you can find and go party at Igloofest! 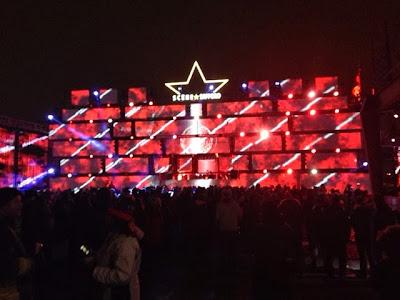 Ahhh crummy phone photos taken at night.  I'm sure nobody will even want to yank them, cuz they're not good, but on the really off chance ... please do not.
Email ThisBlogThis!Share to TwitterShare to FacebookShare to Pinterest
Labels: Canada, music