Cannoli Queen of the North End

A young couple pushing a large stroller paused on the narrow North End sidewalk and peered into the bakery, only to see an impenetrable horde of people filling it from display case to display case.  Clearly the place was popular, although they had never heard of it.  But was it worth the battle to get in and place an order?

A man emerged from the melee and stepped down onto the sidewalk.  He noticed the young couple vacillating, and advised, "Just get one of their cannolis.  Best in the North End."

The young man stared blankly and said, "I don't know what a cannoli is."

(Note: This falls under the category of things you should NEVER SAY when you're in Boston's North End!)

The man, in true Boston fashion, reacted loudly: "What??  You've never had a cannoli?  What are you even doing here?"

People paused.  People stared.  Other people chimed in about the mandatory requirement to try a cannoli.  The young man became quite flustered and embarrassed.

Desperate to divert attention from his cannoli faux pas, the young man glanced around and spotted my friend and I standing in the street.  We must have looked friendly, or pitying, or nonjudgmental, because he zeroed in and asked us where they could just get a slice of pizza.  We sent him back down the street to Ernesto's and continued to wait for our other friends to escape the bakery craziness with our order of--what else?--cannolis. 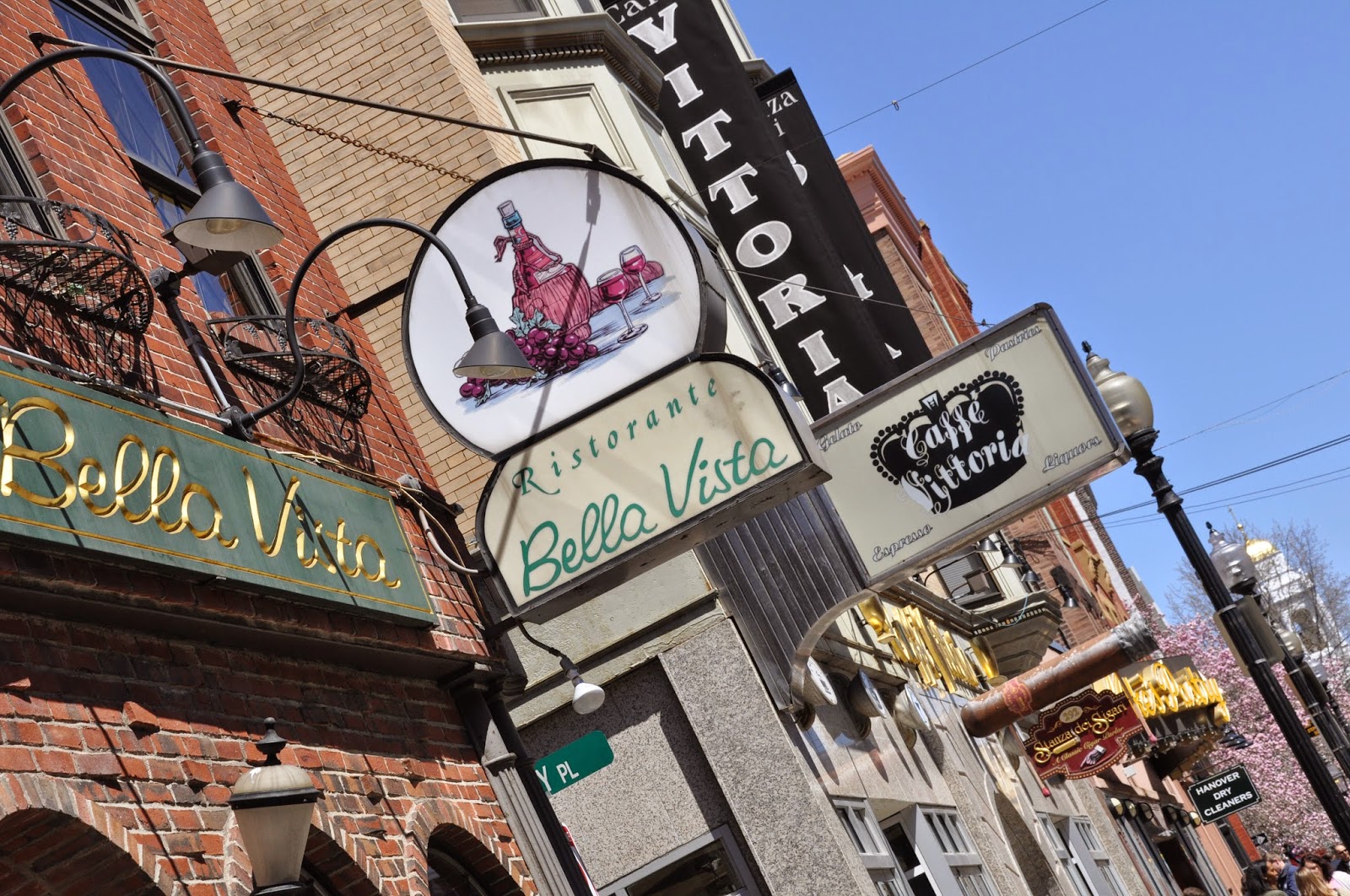 The cannoli was originally a Sicilian pastry.  Actually, the singular is cannolo and cannoli is plural.  But Americans never order one measly pastry at a time, so it has become cannoli and cannolis instead.  The basic cannoli is a round roll of fried pastry dough filled with creamy ricotta cheese, but the best type of cannoli has the ends dipped in chocolate chips.  There are also an endless variety of flavored options, from tiramisu to cherry to pumpkin to coffee to raspberry.  (I apologize for the lack of cannoli photographs, but if you hang on to them long enough to take pictures, you are totally doing it wrong.)

If you want a good cannoli in Boston, you go to the North End.  But then you have OPTIONS.  Too many of them!  Fortunately for you, my friends and I have sampled every cannoli the North End has to offer, and on more than one occasion.  After much deliberation and a heck of a lotta ricotta, we have awarded the Cannoli Crown to the best bakery in the North End.

HONORABLE MENTION: Mike's
Mike's is, for some reason, super famous.  During summer, the tourist lines stretch a block long and make walking on Hanover Street an epic pain.  I don't really get it.  It's good, but it's not that great.  Definitely go here if you want an absolutely perfect tourist experience of waiting in line for ages!  A chocolate chip cannoli at Mike's costs $3.50.  They didn't even have plain cannolis the last time I visited, but I'd guess a plain one would be $3.00.  Also, Mike's is CASH ONLY, so make sure you hit an ATM before you spend half an hour standing in line!
(300 Hanover Street) 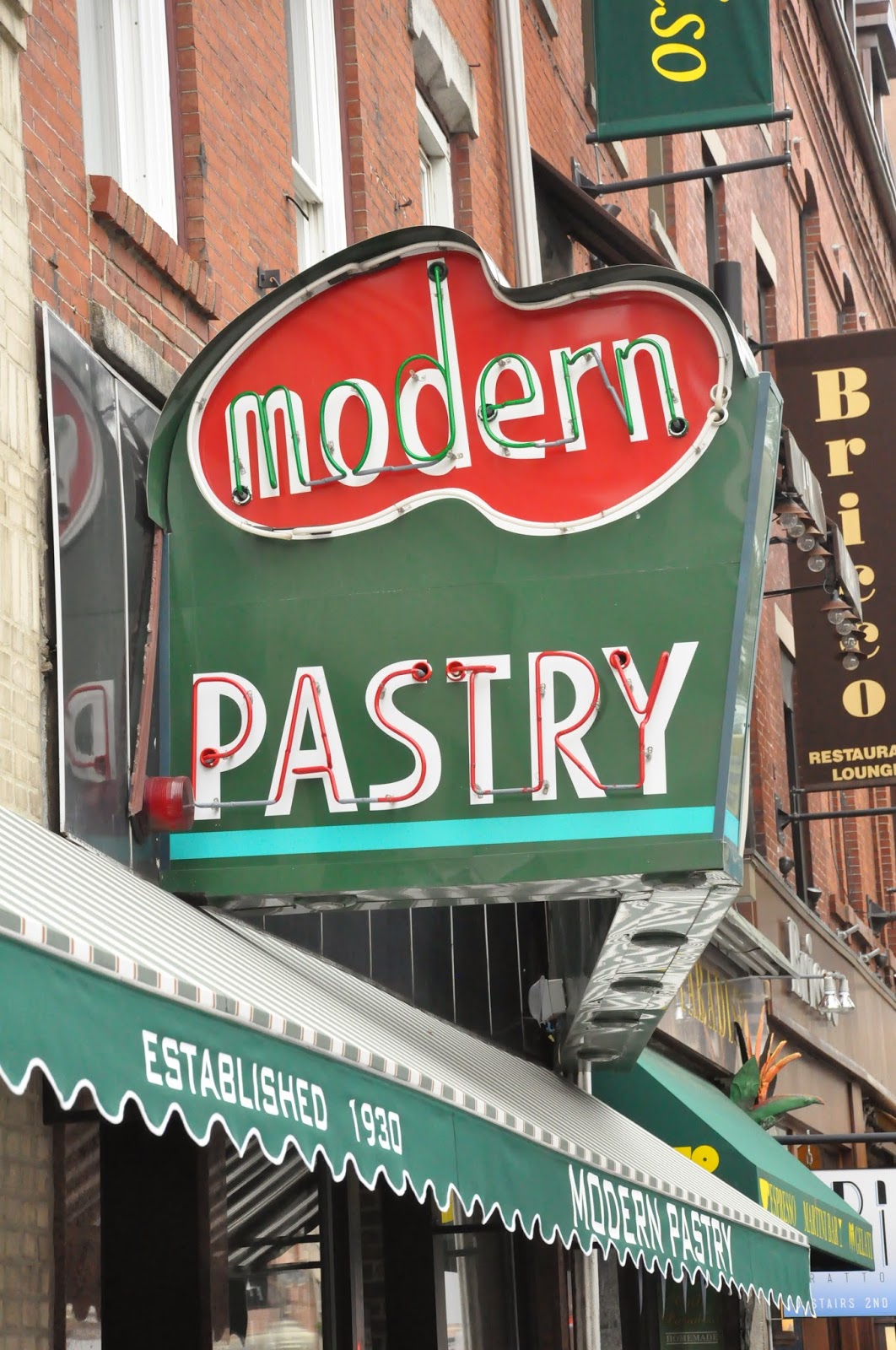 SECOND RUNNER UP: Modern
Modern is across the street and half a block down from Mike's.  It used to be a very tiny, cramped space, but earlier in 2014 they expanded significantly and the new bakery is basically the same size as Mike's.  Room to breathe while waiting, huzzah!  A plain cannoli at Modern is $2.50 and they are also CASH ONLY.  The lines aren't typically as long as Mike's because, like I said, Mike's is super famous.  Modern is only second famous.  But Modern is better.
(257 Hanover Street)

FIRST RUNNER UP: Maria's
This little place is very easy to miss, which is unfortunate because they have delicious pastries and cakes!  I have one friend who swears by Maria's above all else, but the majority shouted her down, so Maria's gets second place.  Regardless, they DO have excellent cannolis and unlike most of the other bakeries, the shells remain empty until you walk in and order.  THEN they fill the cannoli, so its super fresh!  A plain cannoli is $2.50 and chocolate chip is $3.00.  If you order more than $10.00 worth of goodies, you can use a CREDIT CARD!
(46 Cross Street)

Now that we've rejected some of the most famous bakeries in Boston, you're probably wondering what's left!  Can I get a drum roll please?  The Cannoli Queen of Boston is ..... 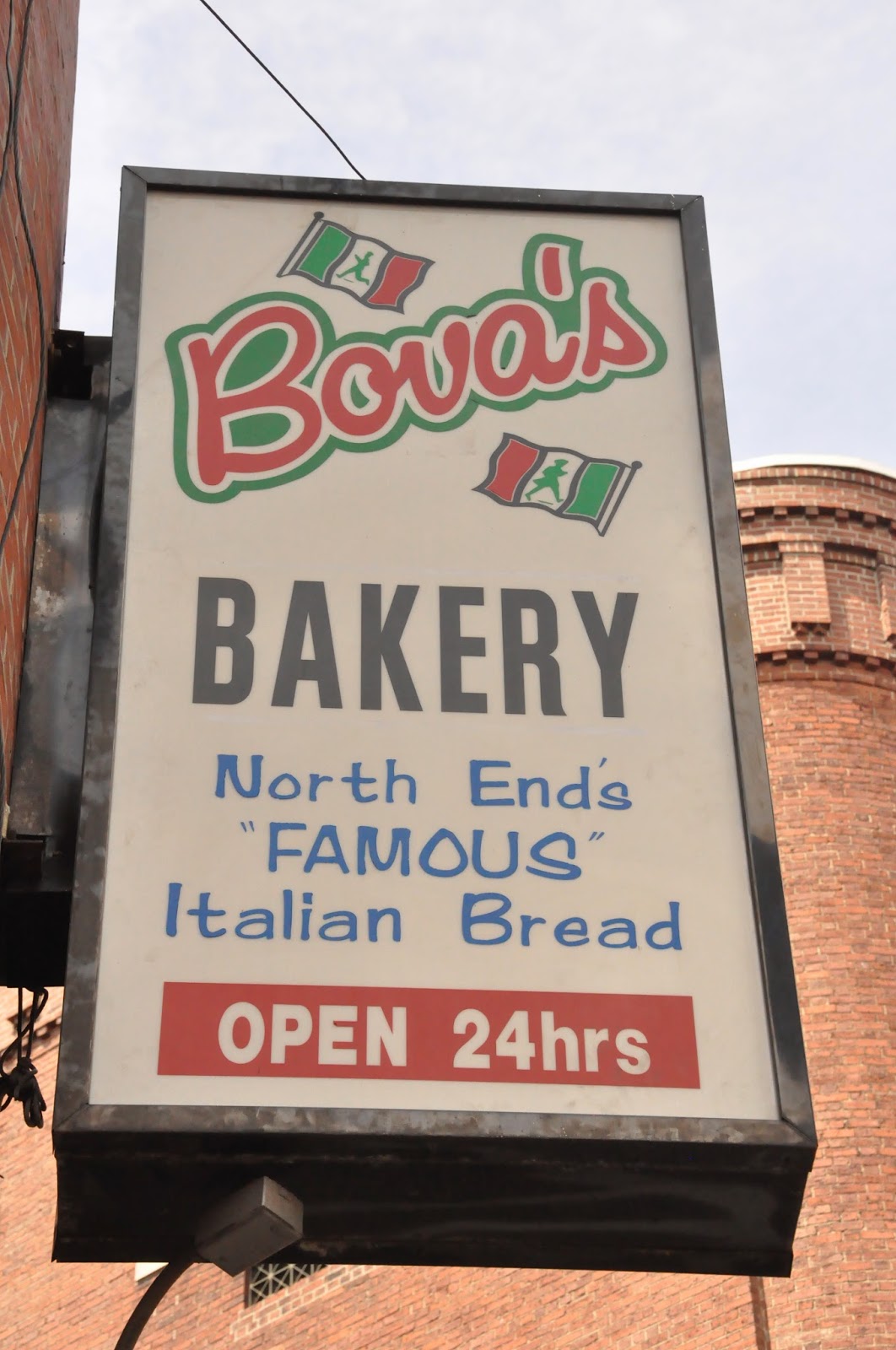 Bova's!!!
Bova's is a North End Secret because it is NOT on Hanover Street!  It's on the corner of Prince and Salem, one block away from Hanover, and it is awesome.  (Yes, I know, Maria's isn't on Hanover either, but Maria's is still on a main road.  Salem Street is only 'main' if you're a local.)  Everything they make is delicious.  And it's open 24 hours a day.  No joke.  Except maybe on Christmas.  The family that owns the bakery also owns a dentist shop across the street, which is perfect after you've spent months eating all their delicious sweets.  A regular cannoli at Bova's is $3.50 and a chocolate chip cannoli is $3.75.  They're creamier, fresher, and flat out BETTER than any other bakery in the North End.  Bova's also accepts CREDIT CARDS for orders over $10.00.
(134 Salem Street) 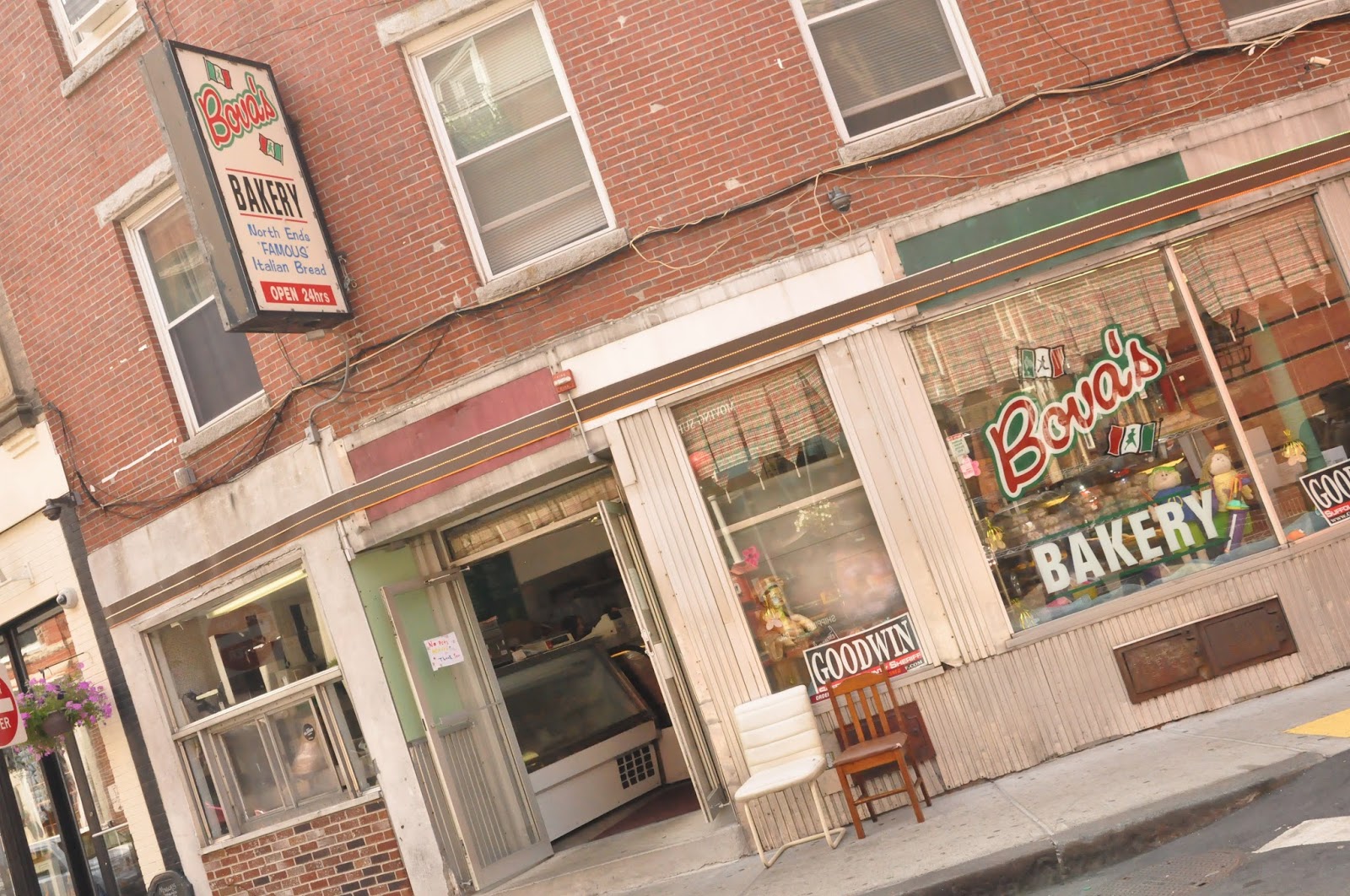 Go, go!  Off the beaten path, down a side street, and enjoy the hidden treasures you'll find!
Email ThisBlogThis!Share to TwitterShare to FacebookShare to Pinterest
Labels: America, Boston, food