Why I Love Mainers, or The Day I Learned to Snowmobile

I figured that the Maritimes were within reach, so it would be easy to find a great snowmobile adventure before my last east coast winter melted away.  I started calling around.  Halifax, where can I rent a snowmobile?  PEI, got anything for me?  You've got trails that circumnavigate the island/province, there must be options!  No?  St. John's?  Fredericton?

Canada, how could you let me down like this!

Snowmobiling may be super popular, but you have to own your toy to be able to enjoy.  First timer?  Want to rent one and see what it's like?  TOO BAD.

There was nowhere in eastern Canada within a 12 hour drive of Boston where I could rent a snowmobile for a day.  This meant two things.  First, my Canadian friends would not be able to join me for the fun, so I'd be going solo.  Second, my drive would be a lot shorter. 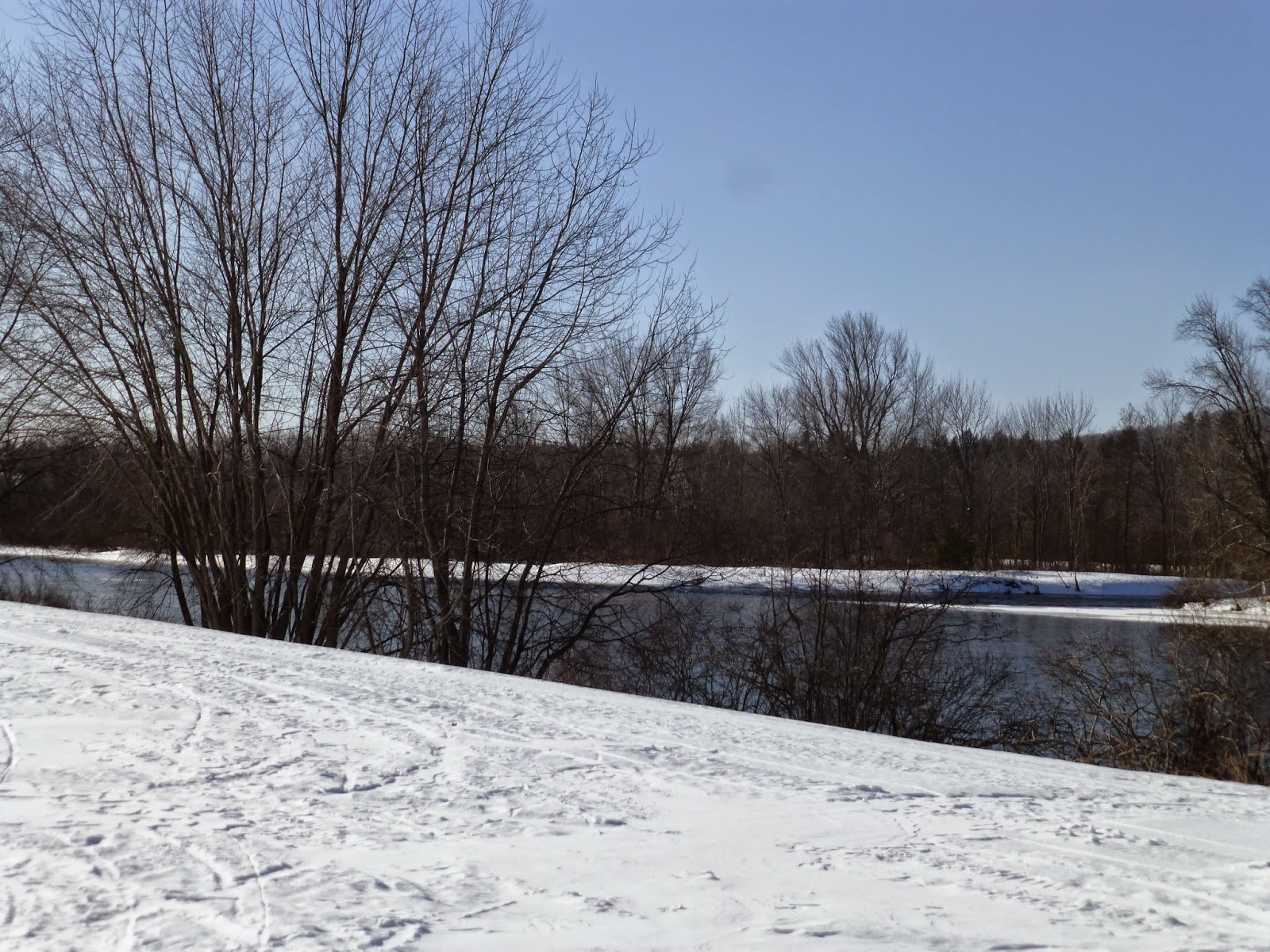 Even better, I found a place where I could rent a cabin for the night and bring the pups!  Sold. We hopped in the truck and headed north.

Maine highways in the winter are rather desolate, with their crusts of dirty plowed up snow on the shoulder and sad, barren trees as far as the eye can see.  So I can't say North Country Rivers outpost knocked my socks off when I arrived, with it's smattering of buildings right next to the state highway.  The row of little cabins faced away from the road towards the Kennebec River, and seemed to me a bit like they were trying too hard to be a beautiful mountain hideaway.  Although in summer, when the trees aren't in hibernation, it's probably close enough! 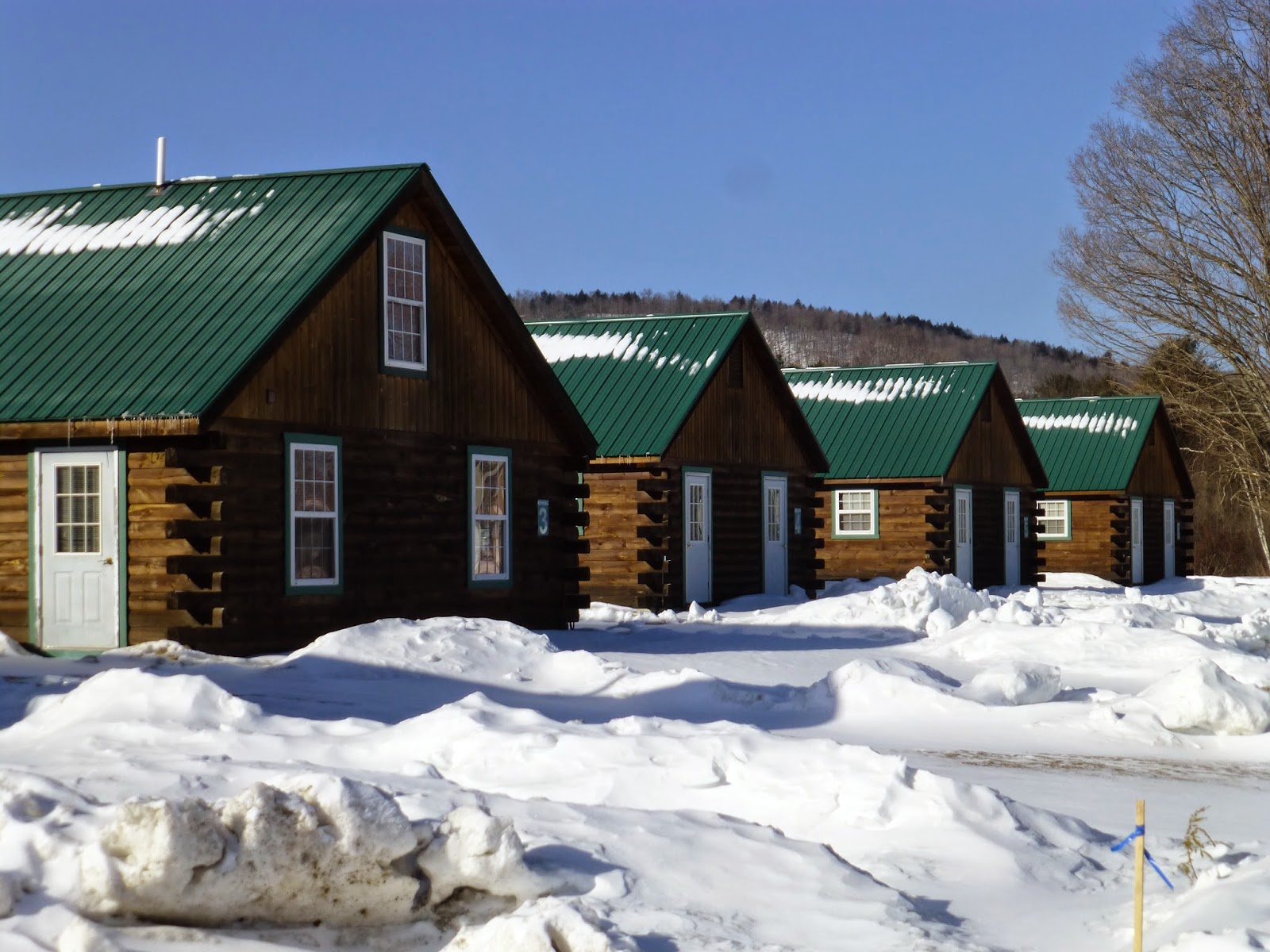 But once I turned my back on the ice-rimmed highway and sad gas station across the street, I was immediately pumped about my mountain hideaway.  What a fantastic deal for $50 a night!!  Mwenzie and I had an adorable two bedroom cabin with a living room and a kitchen ALL TO OURSELVES.  It was cute and clean and completely perfect.

And the snowmobile adventure turned out to be just that--an adventure.  I have to thank the Indian tourists who made up the rest of our group for that.  I was nervous about being the clueless newbie, but those guys made me look like I'd been doing this for years! 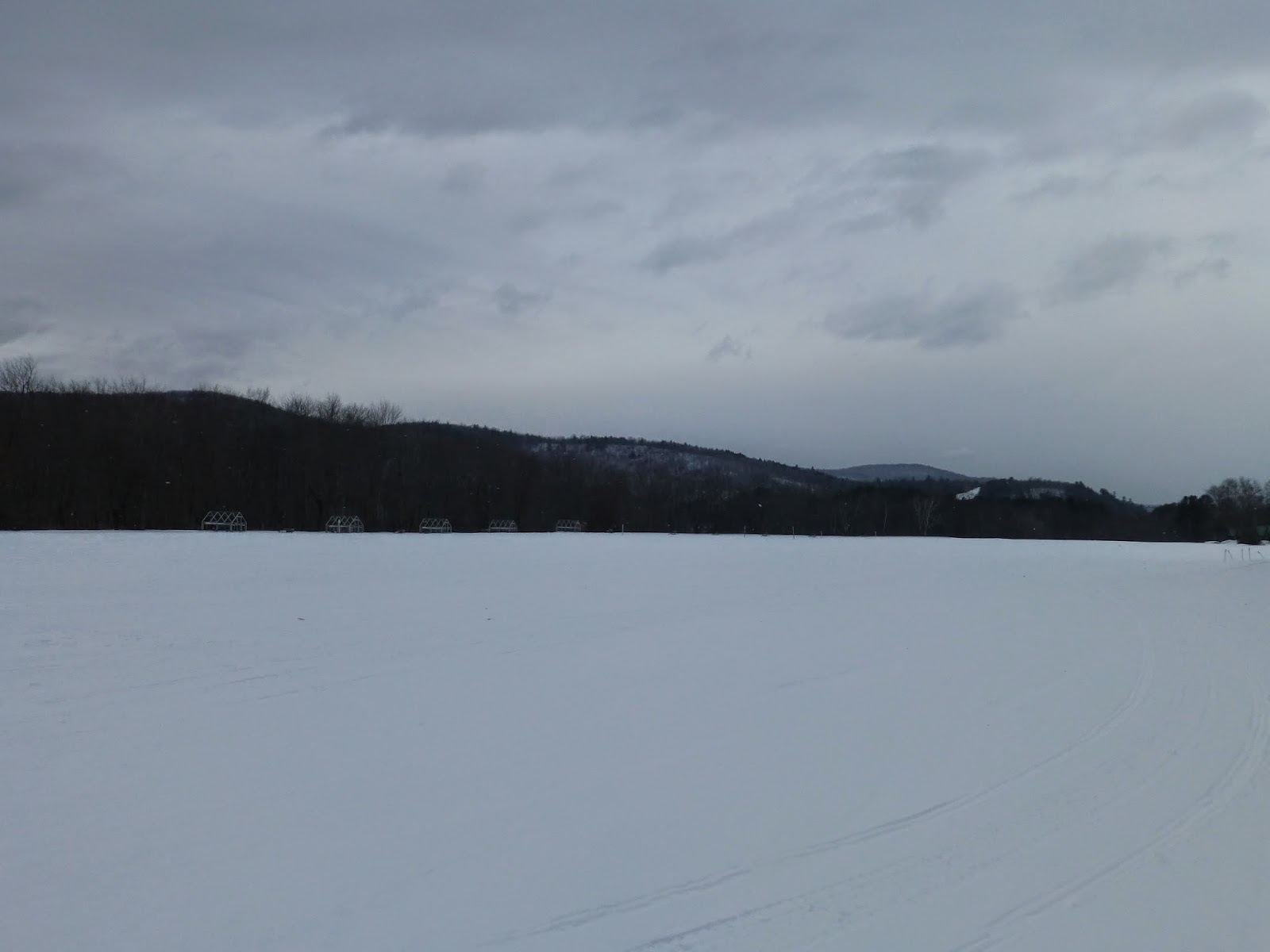 Eventually the guides booted me out the door to practice on the snowed-over airstrip outside while they sorted out the chaos in the main lodge.  So, I hopped on with my helmet, turned on the ignition, and immediately learned that snowmobiling is actually a lot like riding a jet ski and is therefore AWESOME.  You learn quickly that what looks like a vast, smooth snow field actually has a lot of texture and terrain that you would never notice if you weren't traversing across it.  You have to lean a bit to turn and help keep your weight distributed (this was more important out on the actual trails than on the flat air strip), but otherwise it's basically press the gas and go!

When the whole group was finally mounted up and vaguely comfortable with operating the machines, we headed off down the snowmobile trails that cut across the end of the air strip.  We rode for over three hours!  The trails were usually quite wide, with plenty of space for folks to pass us going the other direction.  They curved around trees and swept down into gullies and leveled out along ridge lines to give great views of Maine's mountains off in the distance.  With my crazy Antarctica boots and huge mittens, I found that I was quite comfortable with one exception- my head.  Sure, I had a helmet on, but there are cracks around the neck and around the visor that let in a piercing wind that made my brain go numb.  At one water break, I dug out my balaclava and put it on under the helmet, which fortunately fit over the layer of fleece.  And then I was perfectly toasty for the rest of the day! 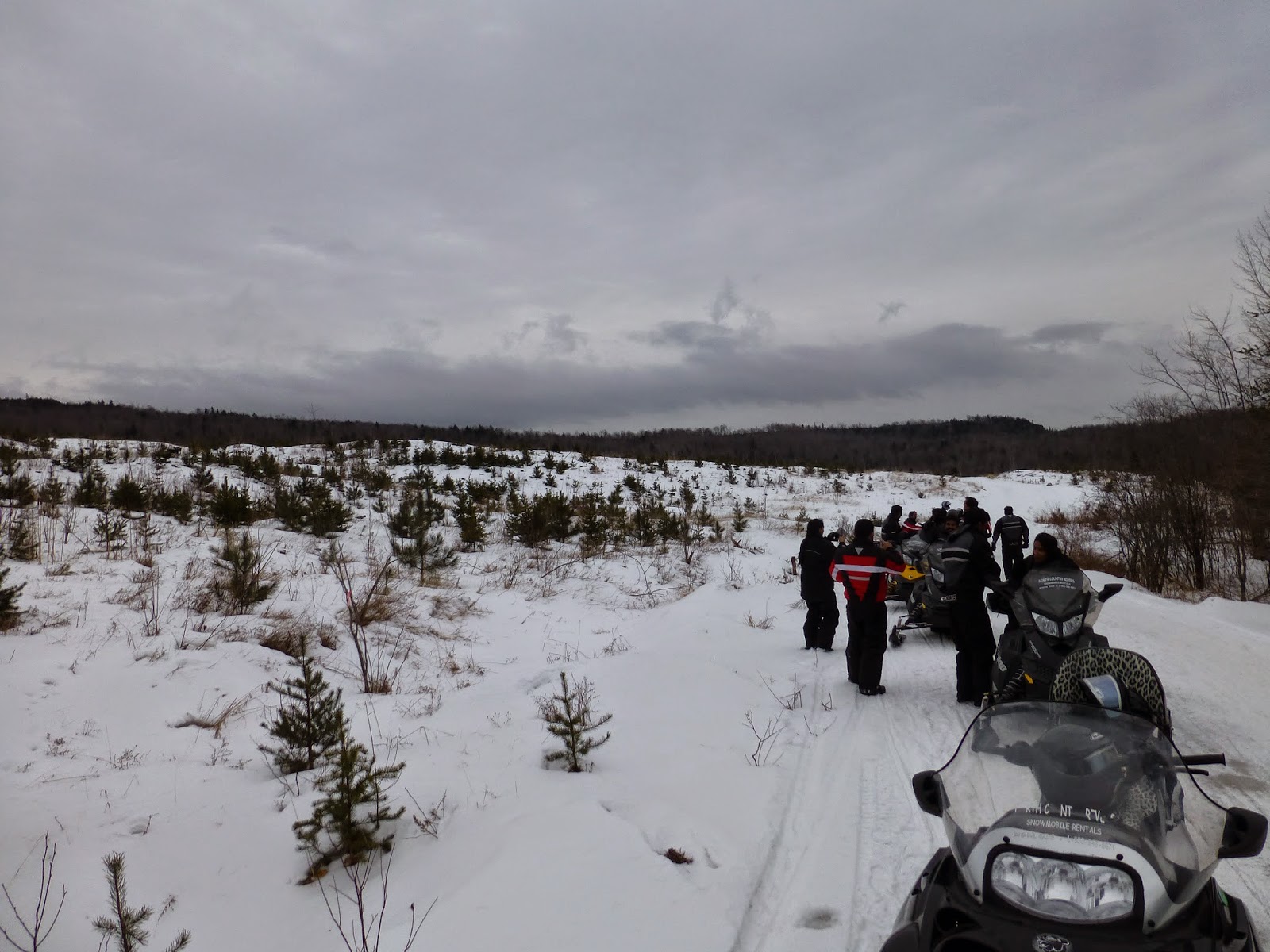 I learned that there's a code among snowmobilers when you're out sharing the trails.  The lead person waves at the oncoming snowmobile and then signals with their hand how many people are following behind, so the oncoming snowmobile knows to modify their speed a little even after they've passed two snowmobiles, because (as in our case) there are still another eight strung out along the trail.  And then, the last person signals to indicate that the parade is over and the oncoming drivers can push the pedal to the metal again.

As we cruised along, I couldn't help but imagine the forests in the middle of summer, teeming with vegetation instead of snow.  I could feel the possibilities tugging at me of awesome trail runs and four-wheel excursions to continue the exploration in a totally different landscape.  I also completely understand why people undertake long distance trips in winter and travel between towns on the never-ending web of trails across the northeast and Canada.  How much fun would it be to line up with a bunch of friends and head off for a long weekend of snow cruising and discovering the back country?  This trip was just a teasing taste! 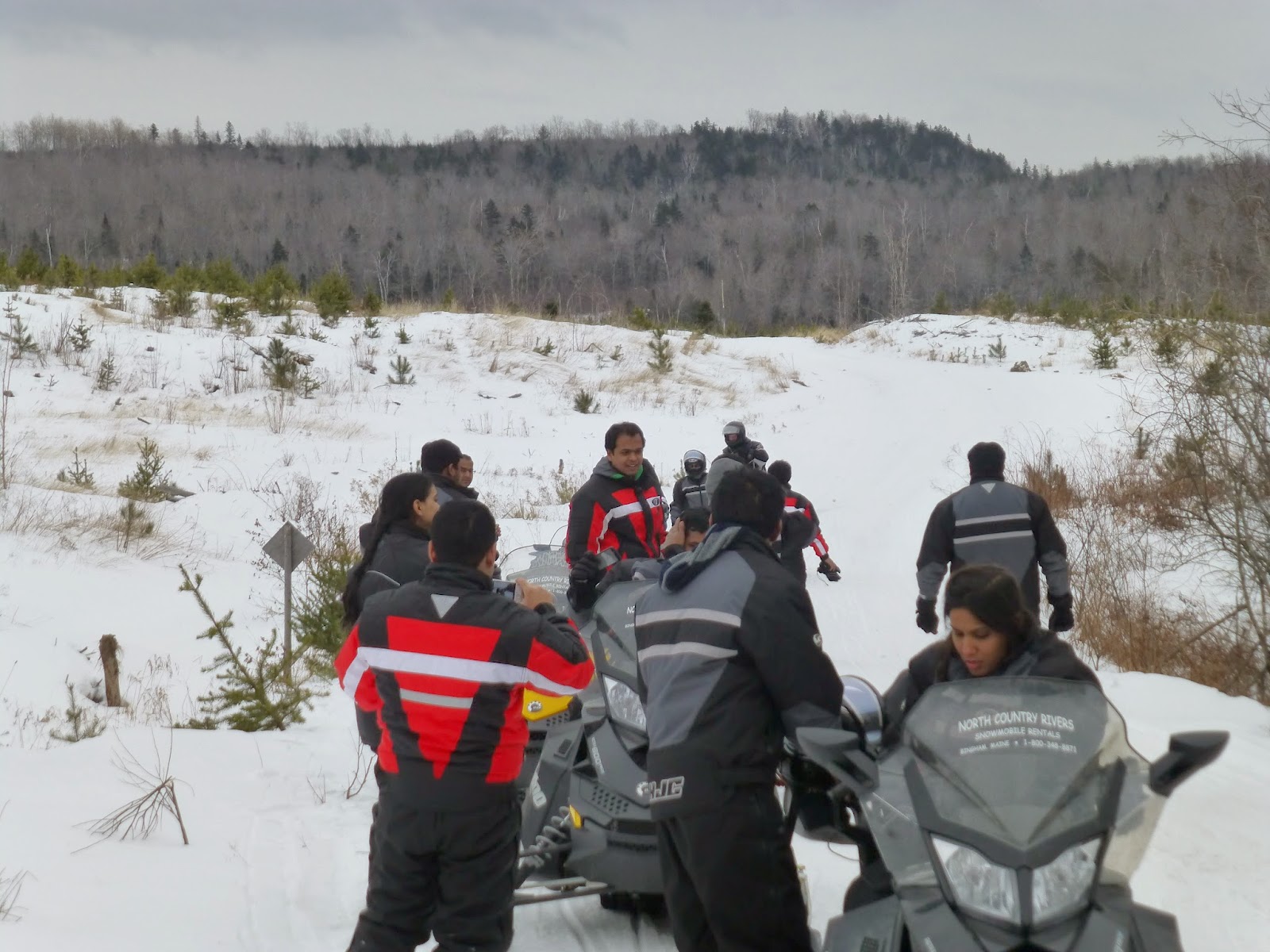 Our guides finally succumbed to the frustration of herding the very inexperienced group and decided to head towards the gas station earlier than normal because it was taking so long for the group to make progress.  So at one point, Gil and Scotty turned right with the group and told me to follow Dana to the left.  They had very kindly realized that I had taken to the machine a lot faster than the rest of the group, so I got a quick side trip to stretch my wings a little!

Two minutes later, the two of us were barreling along the absolutely most breathtaking trail of the entire day, right along the banks of the icy river through a tunnel of frosted trees.  The entire world was fading into shades of blue as dusk settled over the woods.  We picked up speed significantly, which kept me on edge because one misturn and I would be flying down the ten foot drop into the frozen river, but I made it to the end of the trail, which was marked by a huge dam.  By the time we started towards the gas station, it was well and truly dark.

And then Dana got lost.

One second we were on a snowmobile trail carefully cutting across a very steep hill, and the next second we were in someone's backyard and had to do a twenty-point turn on a very narrow trail to go back and try to find the right path.  It was kind of fun meandering up and down the hills through the the yards of little house with smoke puffing from the chimneys and squares of warm light shining through the windows into the dark.  But finally Dana had to admit he had no idea where we were, and we ended up driving the snowmobiles down the road to find the gas station.  Yes, down the road.  I didn't know this was possible.  I don't think it's very good for them, but it'll work in a pinch. 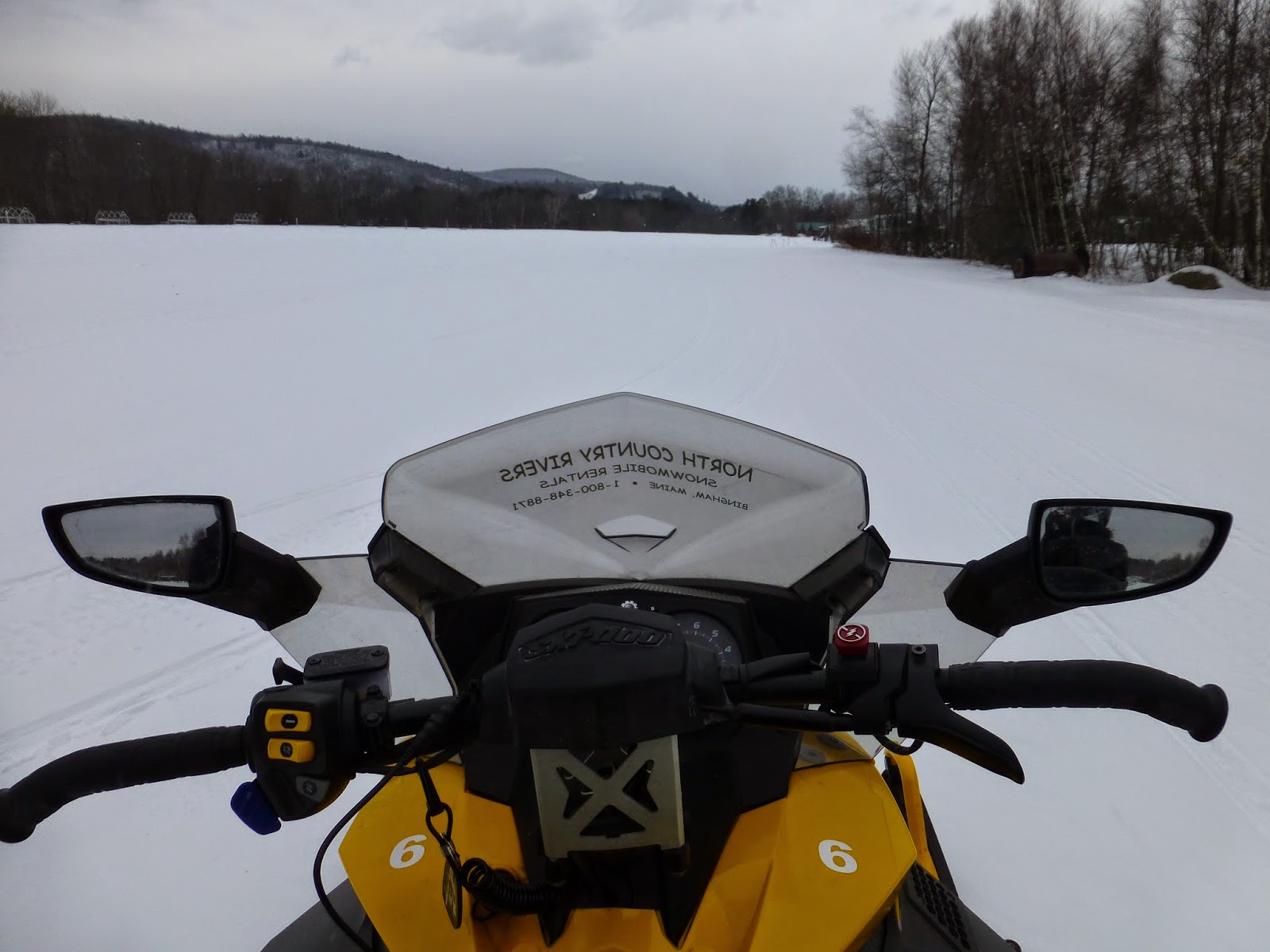 And then guess what.  We beat the rest of the group to the station!!  They pulled up about five minutes after us!!

Everyone was wiped out by the time we finally made it back to the outpost, but North Country Rivers wasn't done with giving me a fantastic weekend yet.  I checked on the pups and then went to the main lodge to get some hot food.  The lodge was one giant room with a pool table, tables and chairs, snowmobile gear for sale, the checkout counter, and then a horseshoe bar backed against the wall leading to the kitchen.  There were some locals at the bar, and some other visitors sitting at tables, and two large dogs roaming around saying hi to folks.  When I mentioned Mwenzie, the bartender Leah told me to go get her!  In fact, Leah said she wished she'd known Mwenzie had been in the cabin all day, because she would have kept her in the main lodge instead!


For the next two hours, Mwenzie ran around playing with the two big dogs and I sat at the bar drinking with the guides and listening to stories about white water rafting the Kennebec and snowmobiling and all the other crazy stuff they do.  A small group up visiting from Georgia was puzzled that I'd driven up alone simply because I wanted to try snowmobiling, but before they went back to their cabin, one of the ladies said she was really impressed that I had the courage to strike out by myself, and she thought it was awesome because otherwise I would have missed out on the experience.  I felt like she'd given me a warm and comforting hug.  I was miles outside my comfort zone chatting with strangers in a new place, but they made me feel right at home.  By the end of the night, the dogs were sitting on the bar stools with us. 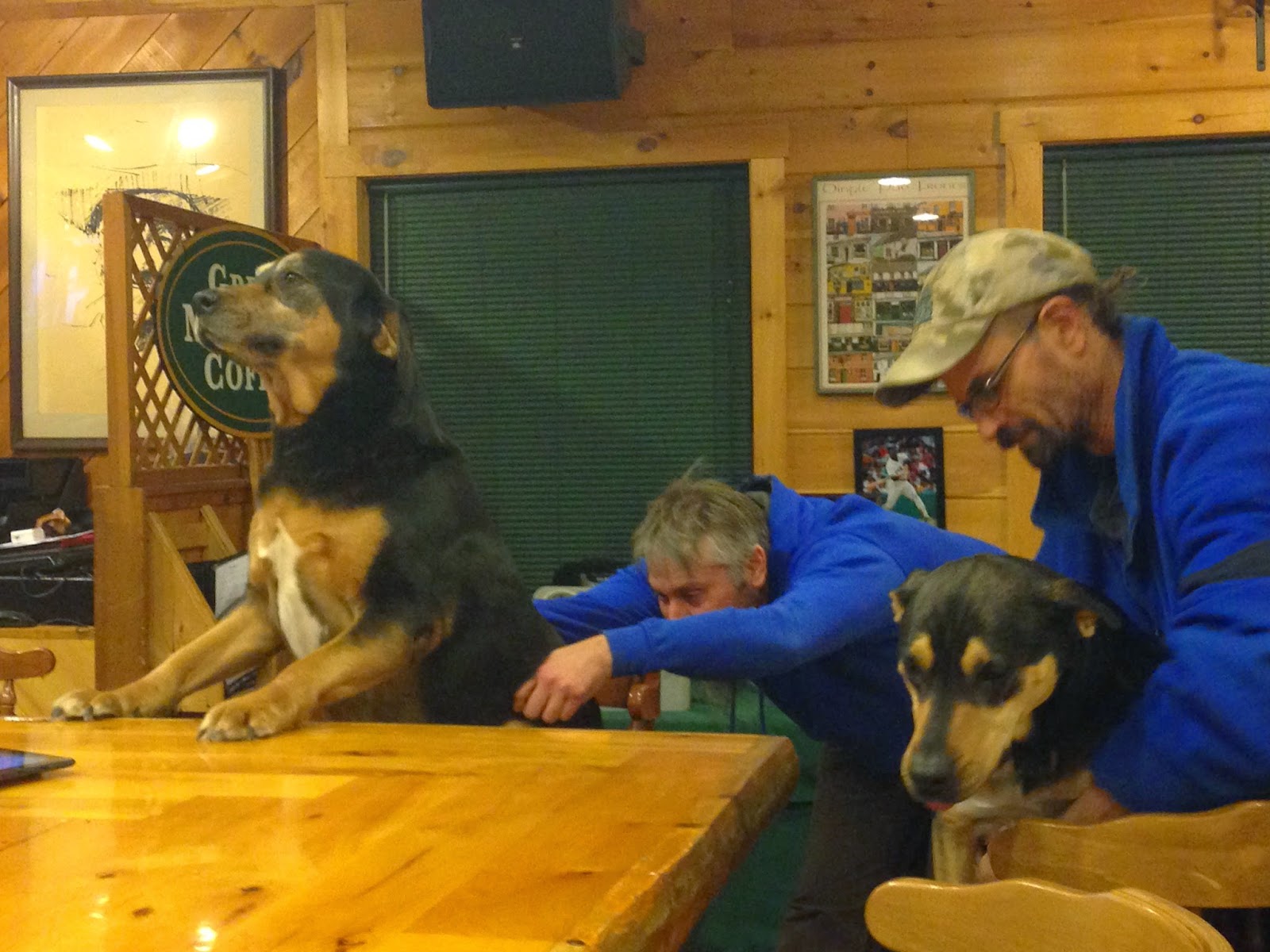 I went to sleep that night proud of myself for shelving my introversion for a night and not being totally exhausted by the experience, pleased with my introduction to the wonderful world of snowmobiling, and grateful that there are still corners of this country where people are slightly crazy, in the best possible way.  Welcome my four-legged kid as much as you welcome me and you've made every hour of driving absolutely worth the trip.  Thanks, Maine! 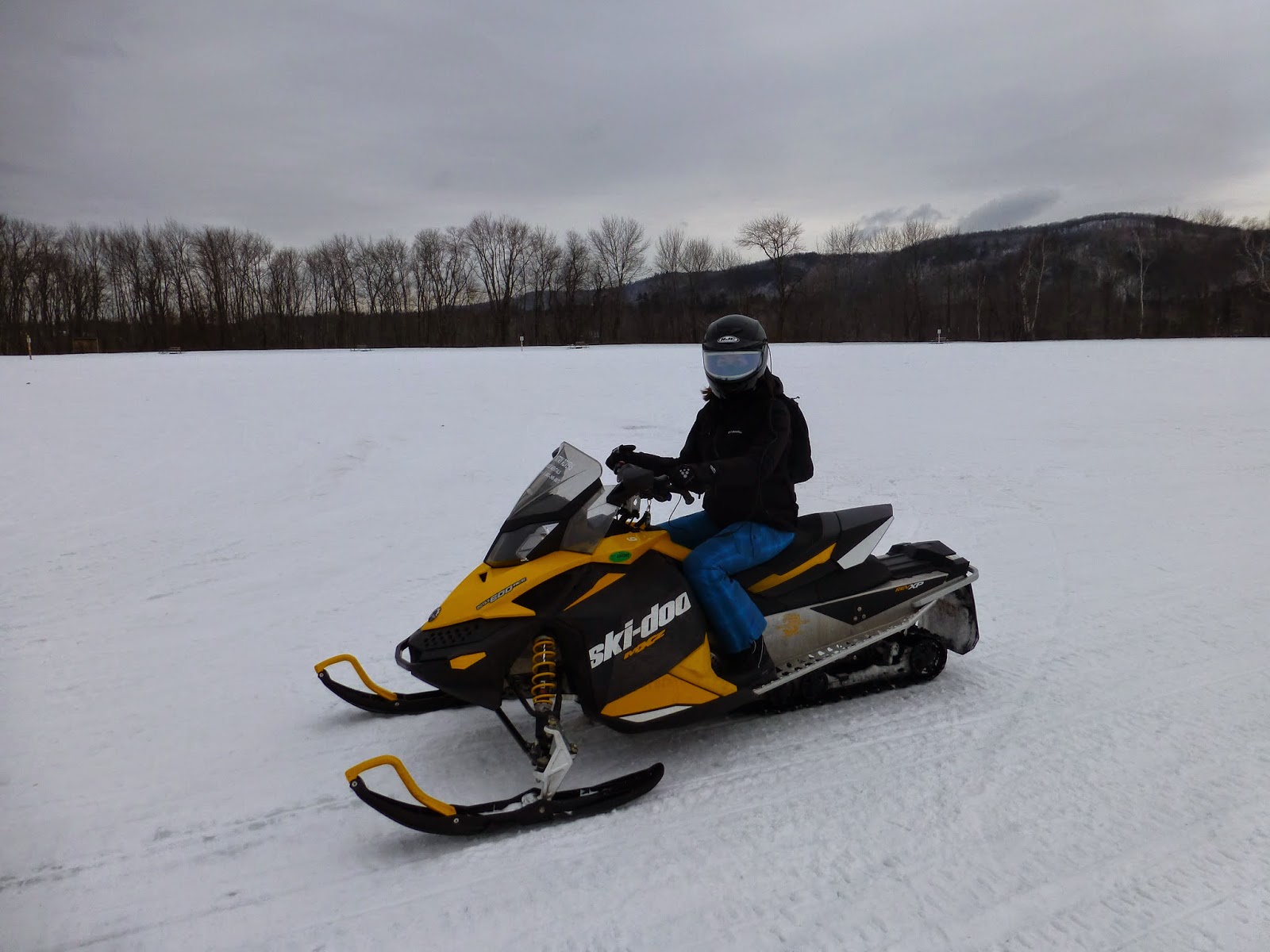