I knew there was no way I would make it out of the park without getting lost, so I tried to plan for it.  Yes, that is correct, I planned to get lost.  Trust me, it makes sense.

The first challenge was that I was going for a run.  I really, really do not enjoy running with a backpack, which meant I was restricted to the two pockets in my shell.  My city maps depicted my destination as a blob of green, so I knew they wouldn't be much use anyway.  I printed a screenshot from Google maps, folded it in fourths, and hoped that would be good enough.  I grabbed emergency cash, my cell phone (which naturally wouldn't connect to the network and was therefore completely useless as a map), and of course my small camera.

The second challenge was that I was going to a very large woodland park with limited road access, but lots of trails.  I've seen places like this before, though.  In addition to the "marked" trails, there are loads and loads of offshoots that could be from animals, or could be run-off gulleys after a storm but look suspiciously like paths when its dry, or were tamped down by people who like shortcuts.  For a stranger like me, these extra trails just make life very confusing.  That's how I get lost. 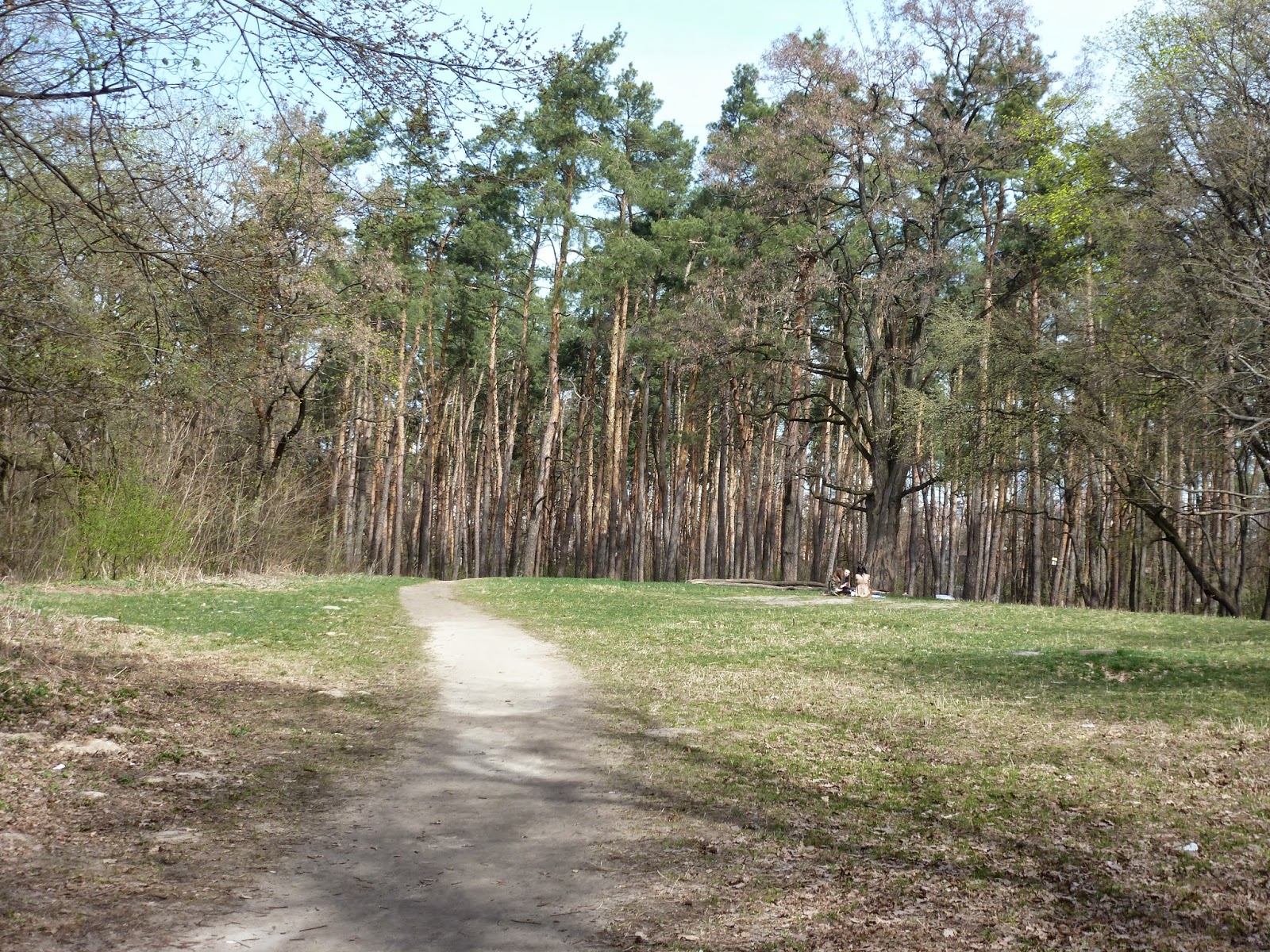 I'm okay with getting lost though.  It's happened before.  Mwenzie and I once drove to Harold Parker State Forest for an easy 5k trail run.  13 miles and 2.5 hours later, we finally rediscovered where we'd parked the car.

Also, I was tired of running on the unforgiving cement slabs that equal sidewalks and roads in Kyiv.  My legs were angry with me, and I was looking forward to a chance to run more than five miles without navigating through traffic. 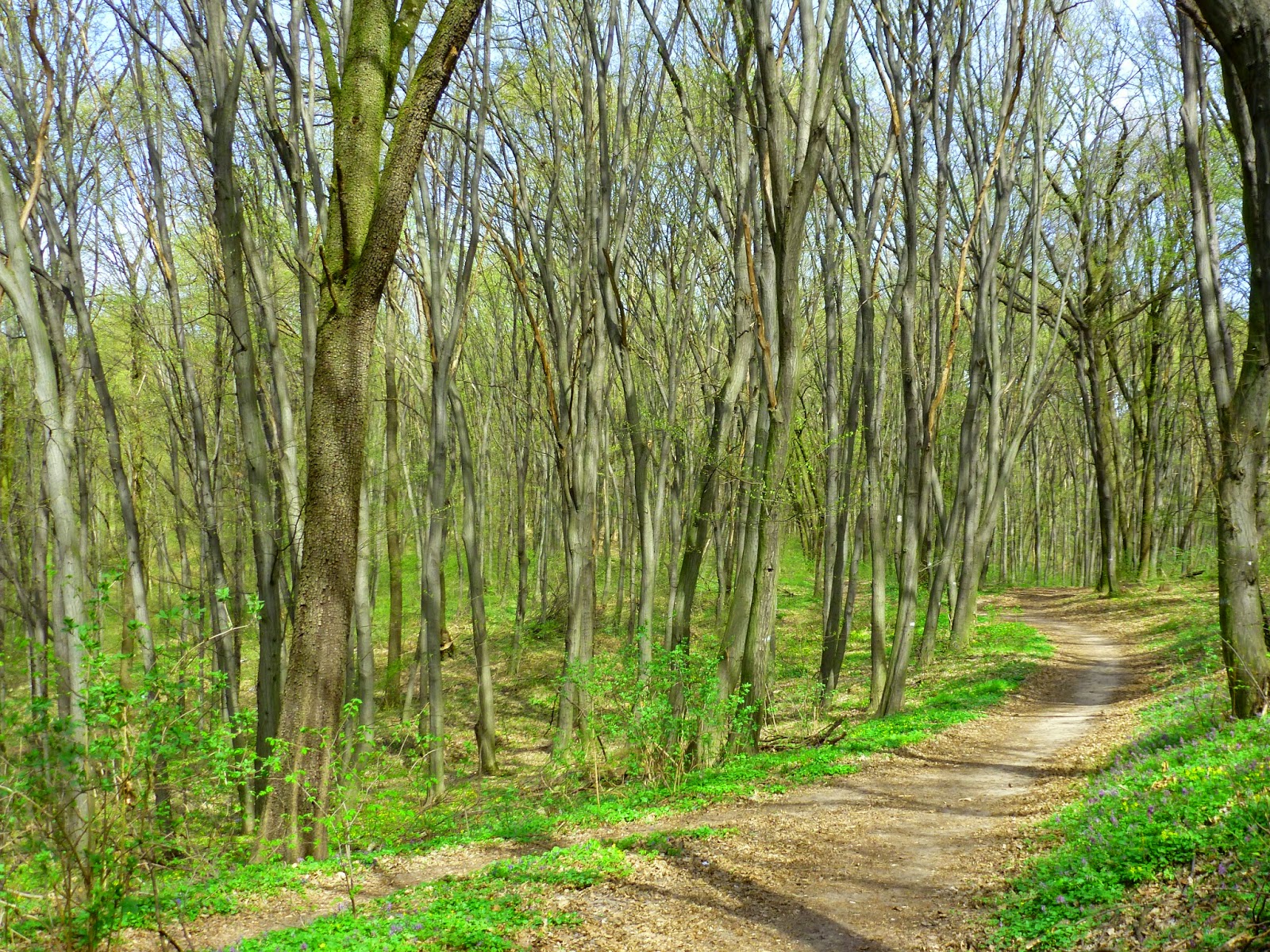 Finding Holosiivkiy Park was easy.  I took the metro to Holosiivska station, popped out of the ground, looked for the main road (Prospekt 40-letya Oktyabrya), and crossed it.  This put me at the northwest corner of the park.

My vague plan from there was to follow the pond and then stay right until I hit a small cluster of buildings.  The trail ended there, but another one picked up across the street.  I would stay on that trail until I found the next two ponds and stick to them as they curved towards the west.  Then I would follow the trail south for a bit until it intersected with another trail heading west, and switch to that one which would eventually dump me out somewhere behind the National Exhibition Center (very distinctive in former Soviet countries, with lots of strange pavilions) near the Hippodrome.  I figured that towards the end of the run, I'd be able to follow hoof prints to find my way.  And then back on the metro at Hippodrome station to go home! 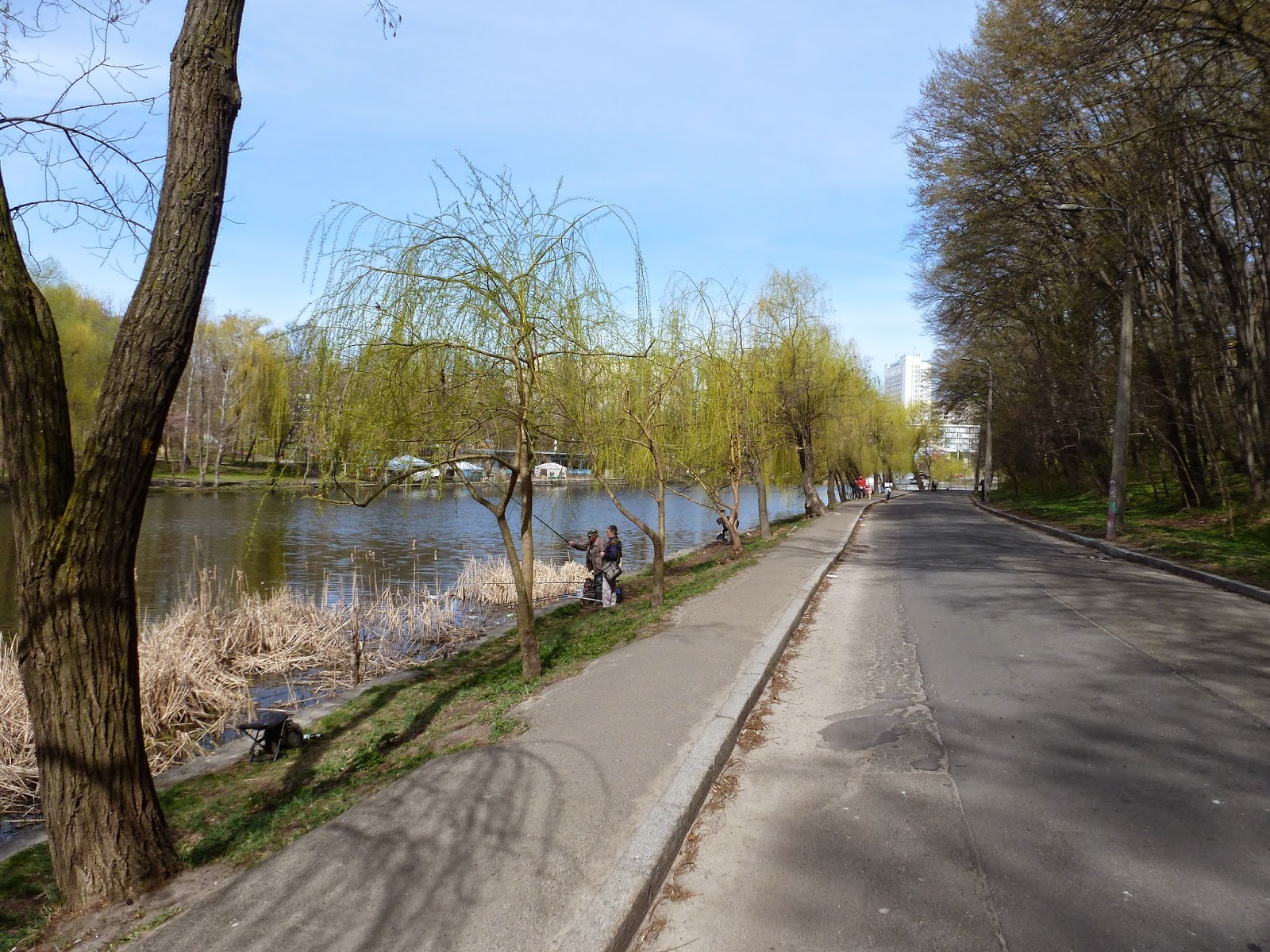 Ah well, the best laid plans.  By the end of the first pond, I was already confused because I knew I shouldn't be on pavement anymore and I hadn't seen a trail turnoff.  But as I expected, there were all sorts of little brown ribbons cutting through the new spring growth on the forest floor.  So I veered off and followed one straight up a very steep hill.  There were wider trails at the top, so I started heading south, somewhat as planned. 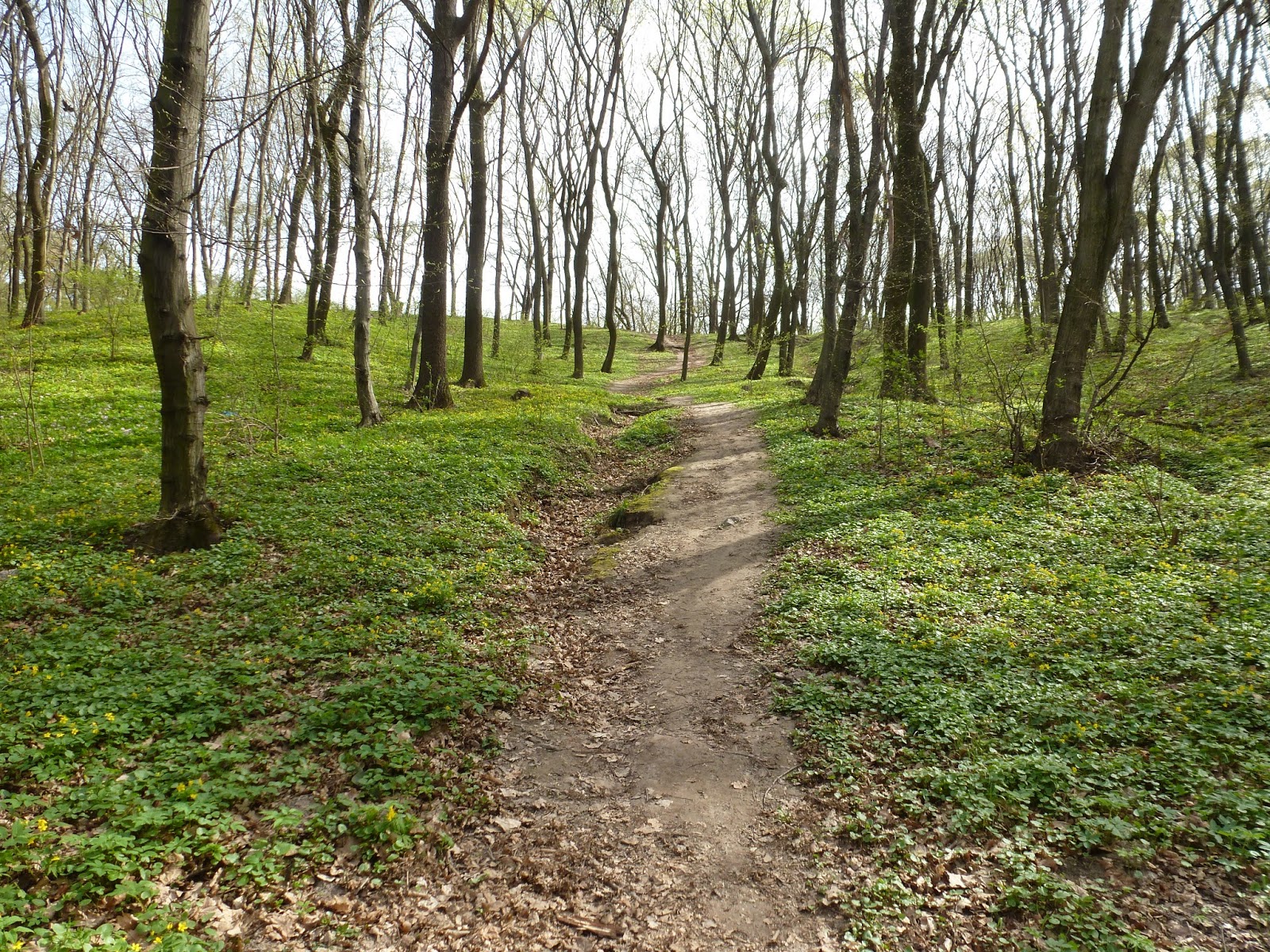 When I stopped to take a picture, a lady tried to convince me to jump rope with her children.  My brain didn't work quickly enough to point out that her kids were about three feet shorter than me, and there was no way they could swing that rope high enough to not decapitate me.  She gave up and commanded me to keep running (Bezhi!), so I did.  Uphill, downhill, and suddenly there were buildings right in front of me.  I didn't expect them so quickly, so I hooked to the left and made a very wide circle around them. 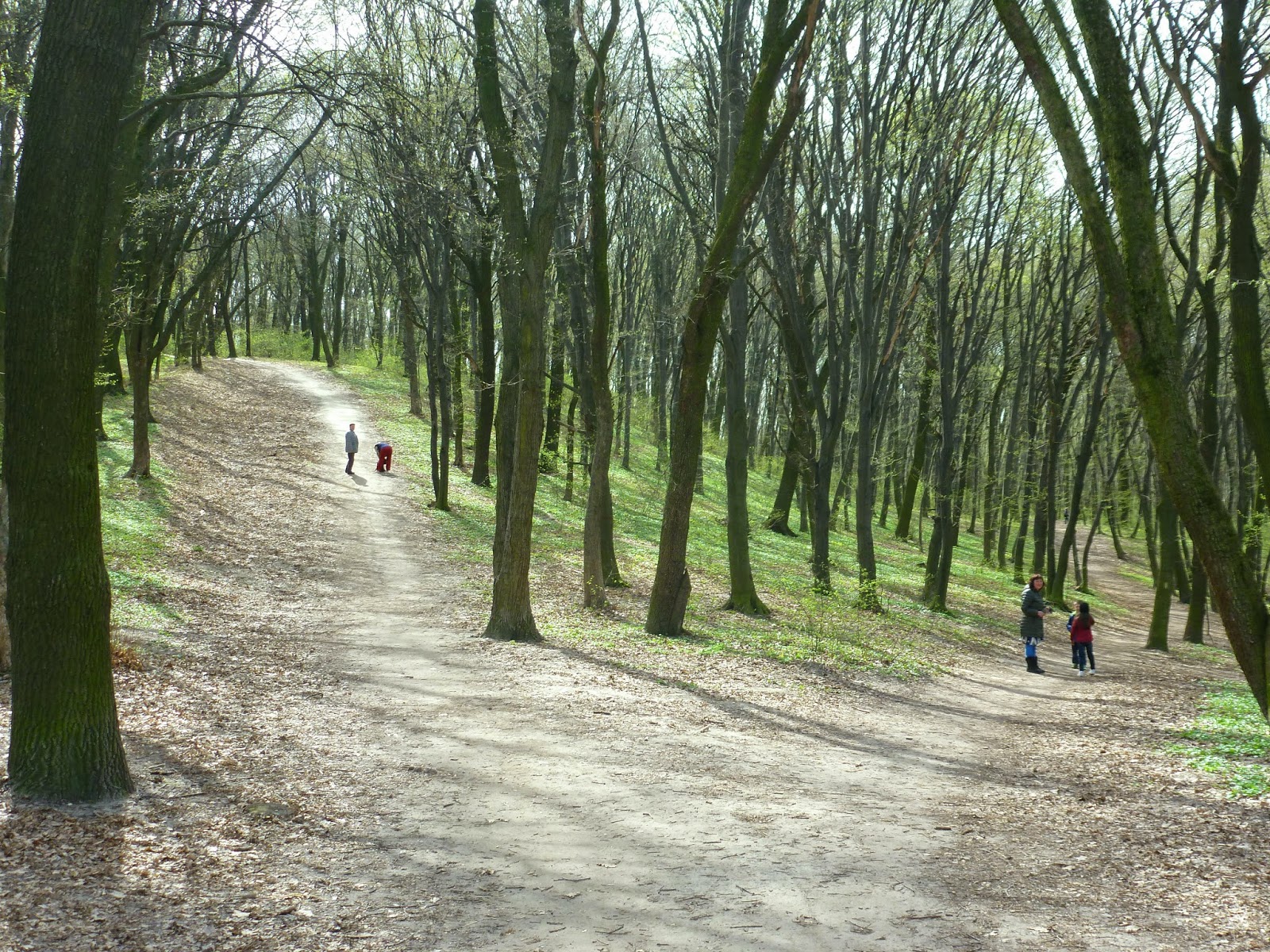 Then I popped out on a road.  By now I was so muddled, I didn't remember that there was one road cutting through the forest park.  But I found a lovely wide trail on the other side, so I followed that.  Before long, I was in the bottom of a gully.  The trees were just starting to think about blooming for spring, so the forest was very open and easy to navigate.  The ground was carpeted green, but the branches were bare.  My feet crunched through the brown layers of dead winter leaves. 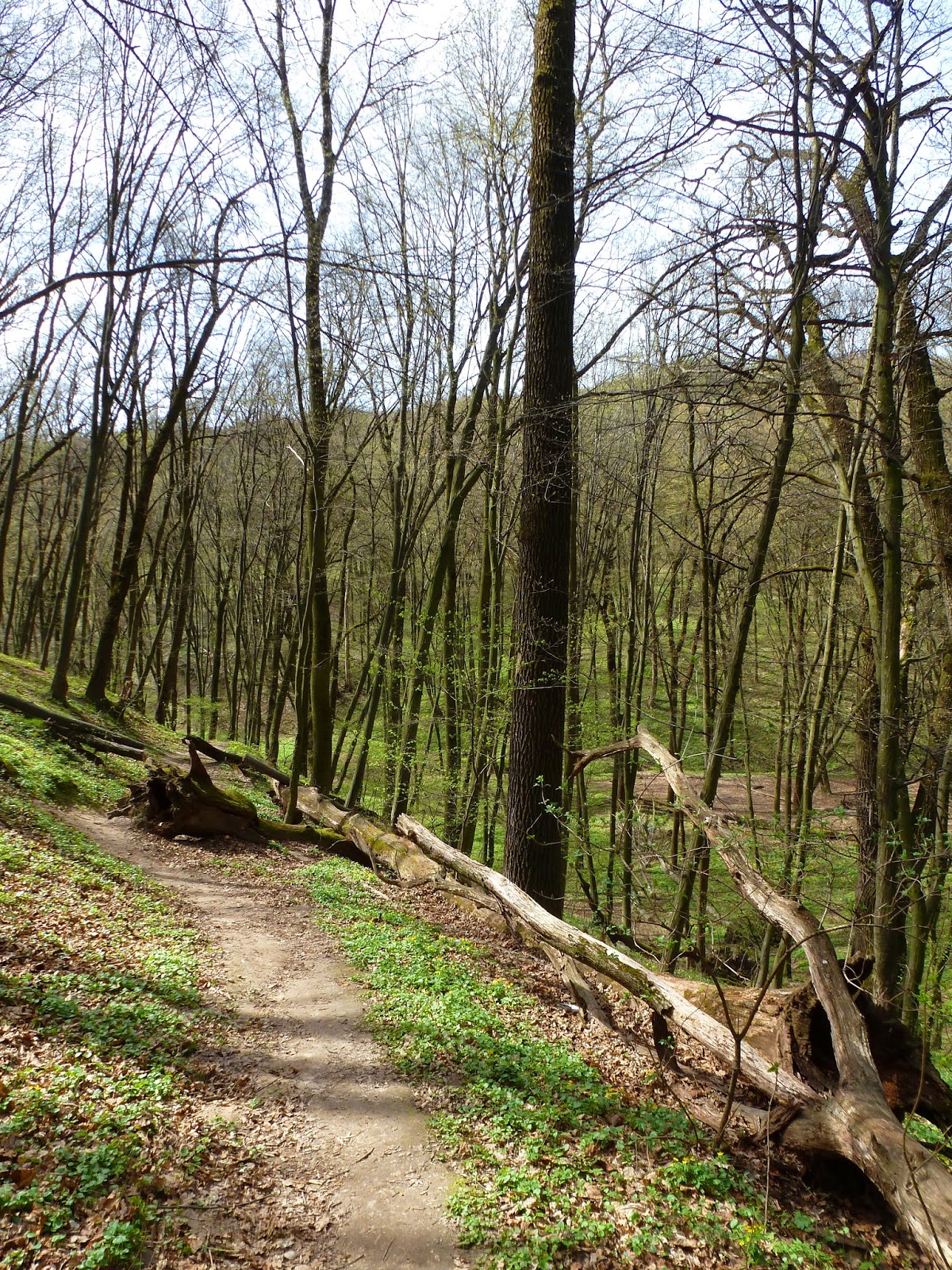 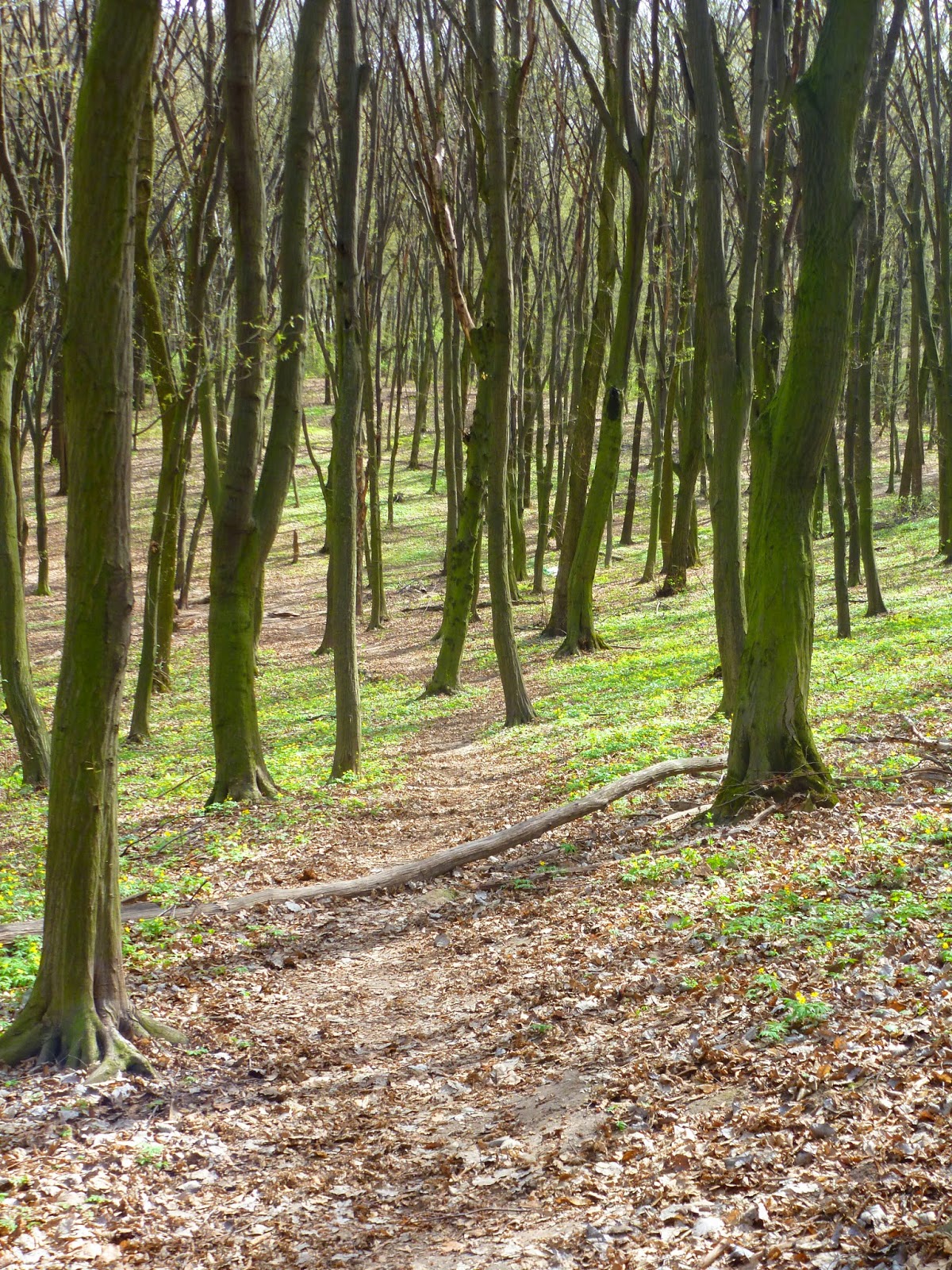 After a precarious log-crossing and several fallen tree hurdles, I got annoyed with the unexpected obstacle course in the gulley, so I went straight up the hillside to get out of it.  I rounded another corner and came to a screeching halt, because there was a goat.  Several of them, actually.  And an old man kneeling on the ground murmuring softly to a kid (goat-kid, not human-kid) that he held under his knee while he tried to fix something on its leg. 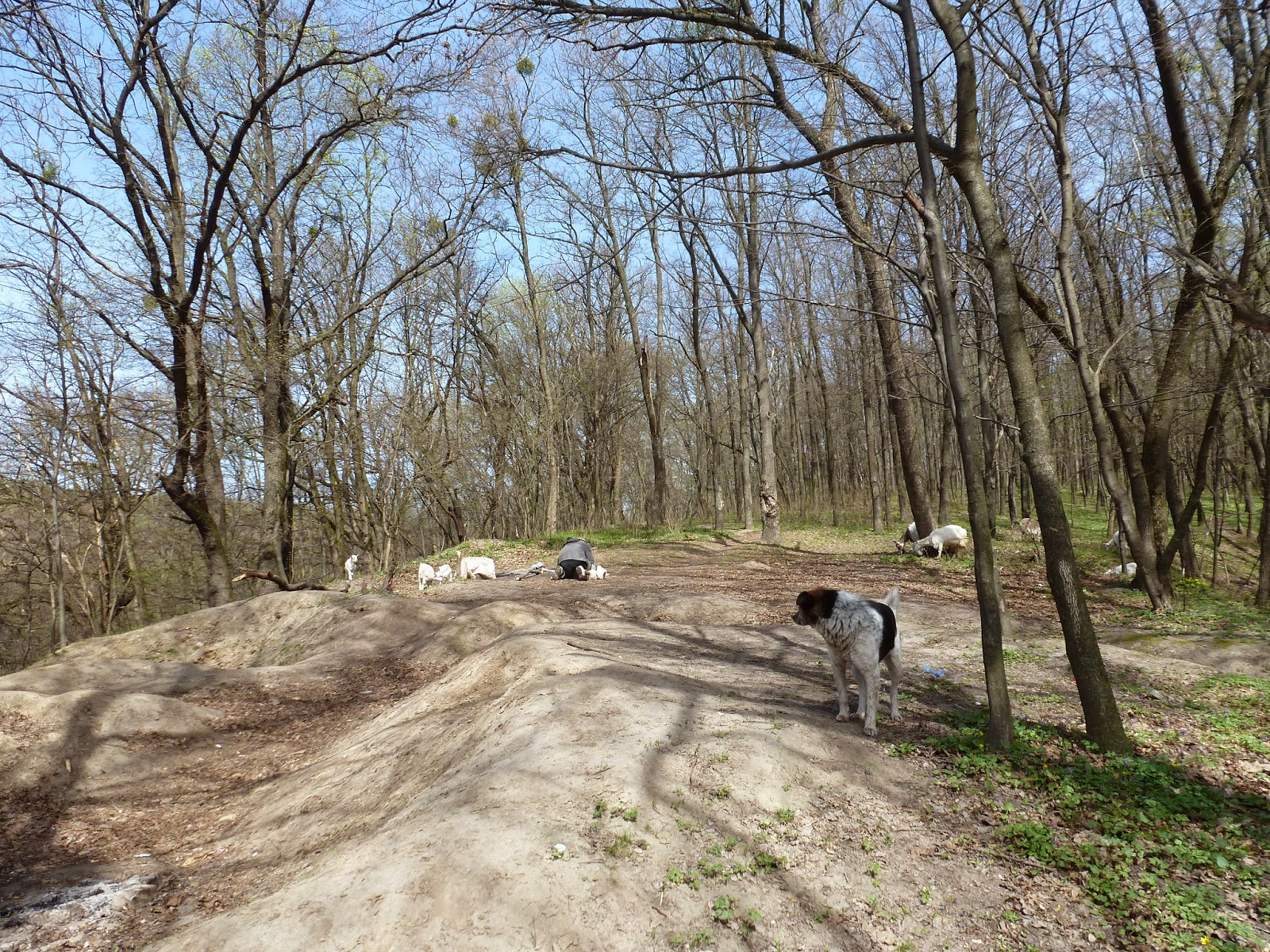 I realized that I'd also found the second set of ponds, although somehow I was looking down at them from the top of a very steep bluff.  Best of all, visible only because the trees were naked, I saw a golden-domed church glittering in the sun on the other side of the lake.  Go for a run in Kyiv, find yourself in the middle of a fairy tale!  I was so surprised by all of this, I just stood there for at least a minute, and then jumped a mile when something tickled my fingers.  I looked down into the golden slit-pupiled eyes of one of the curious goats.  It nibbled on my fingers until I said hello and carefully picked my way past it and the old man, who never looked up even though his dog didn't stop shouting about my presence until I was sliding on my butt down the bluff.  That's about when the poor goat-kid started screaming too.  Did you know goats sound EXACTLY like people crying because they're hurt?  Rather creepy.  Not such a fairy tale moment after all. 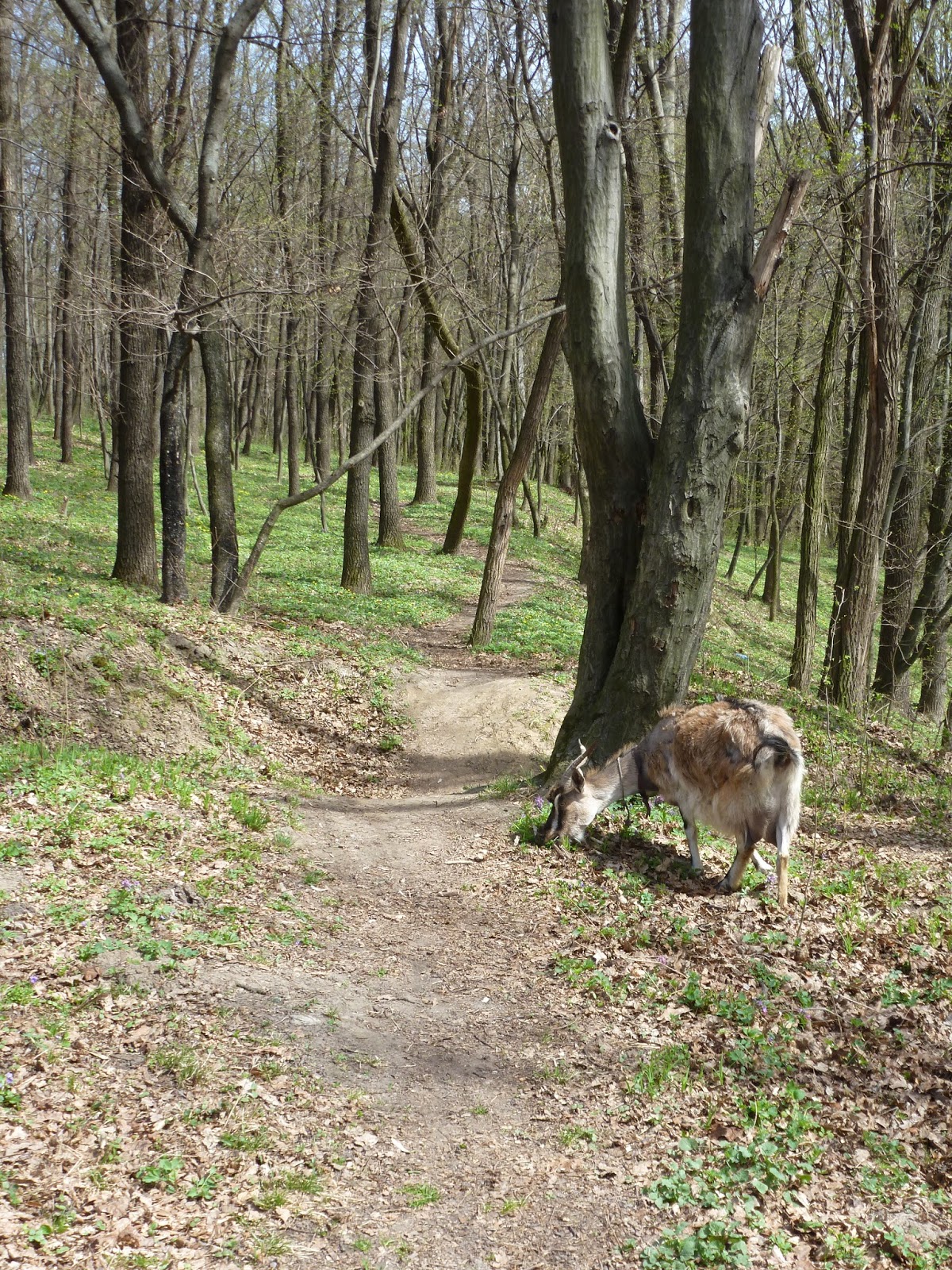 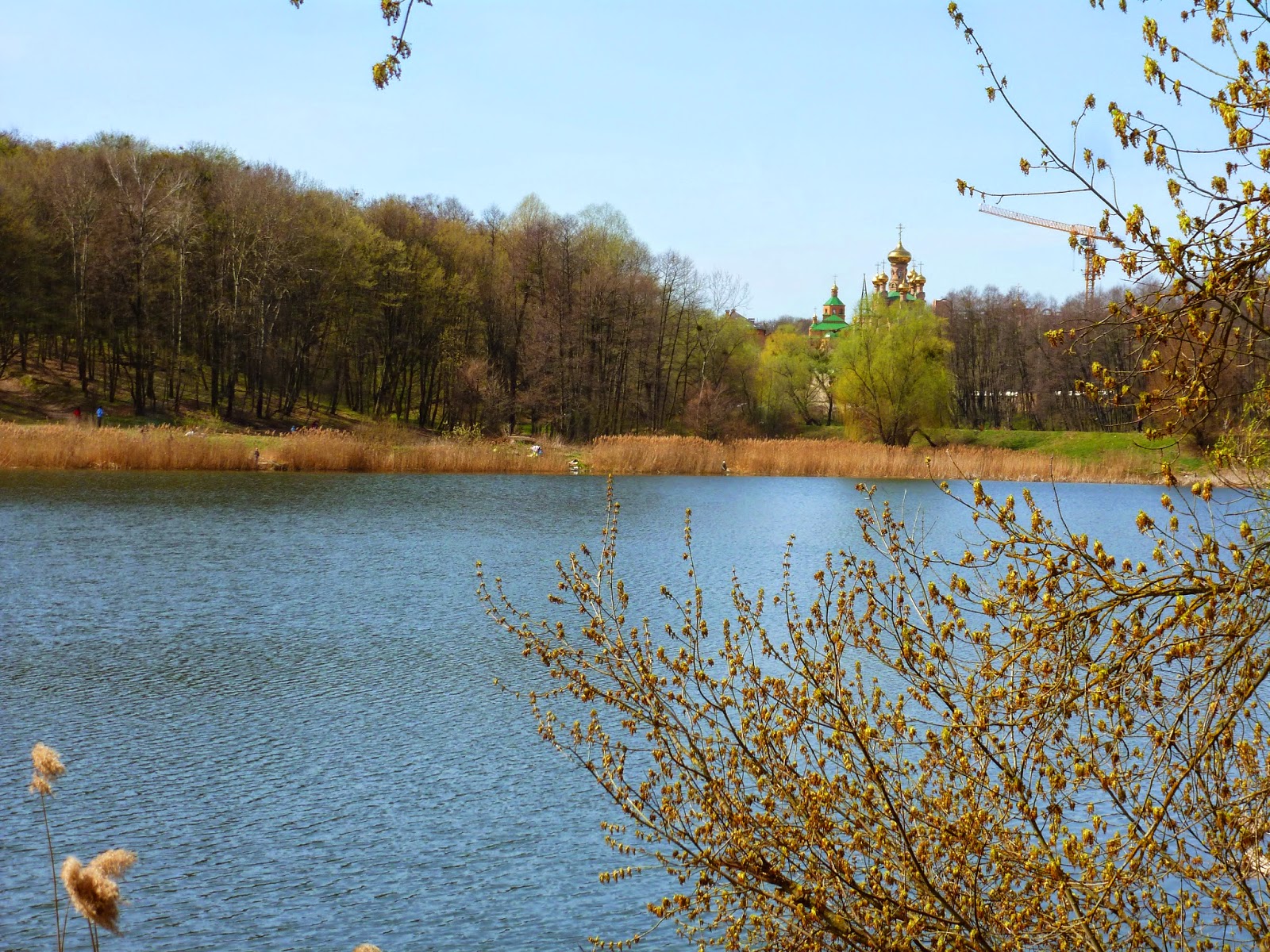 I knew I wanted to keep heading south from the lakes, but I felt a shade uncomfortable with all the people hanging around, so I took the first path I saw.  It went straight up another hill (yay), and then popped out in a plowed field behind a dacha.  Definitely not where I wanted to be, so I followed the edge of the field until there was a spot where I could hop over the shrubs and escape back into the forest.

Not long after that, I found a fantastic grid of dirt paths.  I passed a picnic spot where some families had settled down for a day of relaxing outdoors in the spring weather, and then I was alone in the woods.  The minutes ticked by as I ran along, enjoying the green shade and filtered sunlight and clean air.  Someone jogged past me in the other direction, and once or twice I saw mountain bikers whoosh through an approaching intersection. 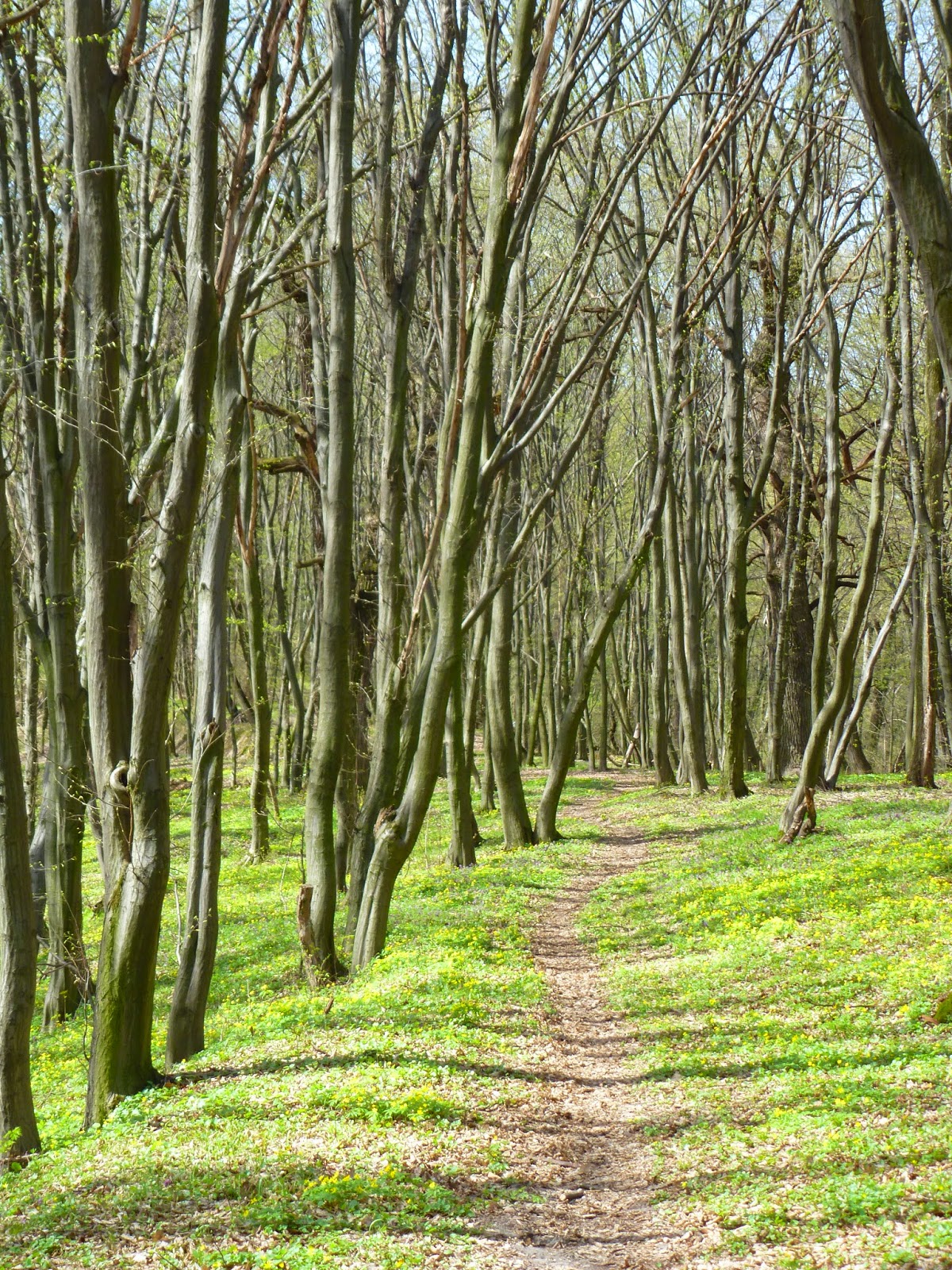 Eventually, I noticed I was dodging the occasional pile of horse manure too.  Good sign!  After an hour or so, I decided I had probably gone far enough south, so I took the next east option.  Except it took me to a road, and there was a gate on the other side of the road that looked suspiciously military in nature, and I was not keen to get arrested for trespassing on government property in a foreign country, so I promptly retraced my steps to the first opportunity to turn north.  I knew I was not heading towards the Hippodrome anymore, but I was over 6 miles into the run and getting tired, so I figured I'd rather try to find my way back from whence I came than keep aimlessly running. 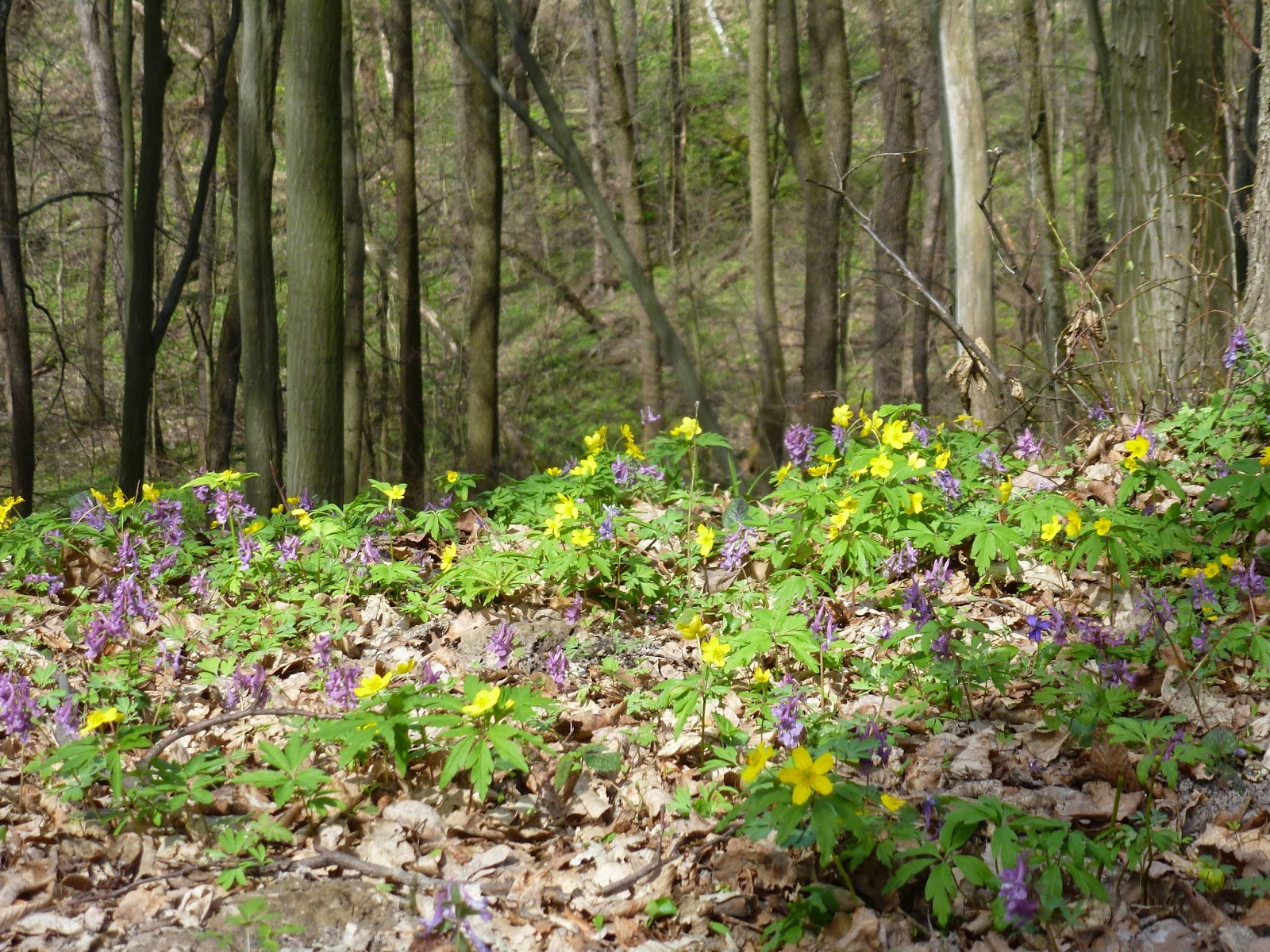 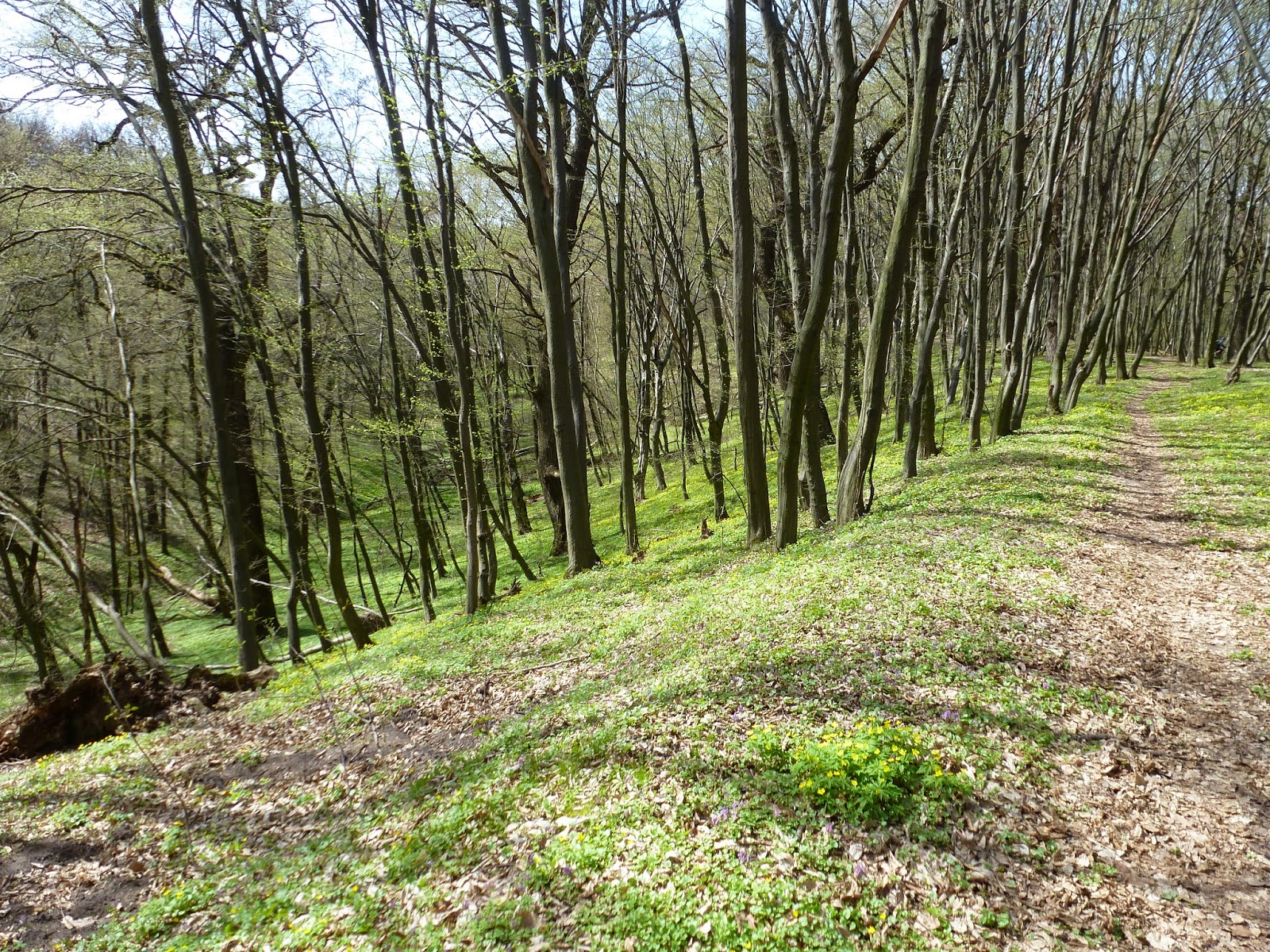 The trail wiggled back and forth through the trees, and a handful of mountain bikers passed me also heading north.  Then a girl on horseback, accompanied by a chunky yellow Lab, approached going the other way.  She wished me a happy holiday, and I should have followed her, but I stayed on my trail.  Eventually it had to either chuck me out at the ponds, or at the main road which followed the western edge of the park! 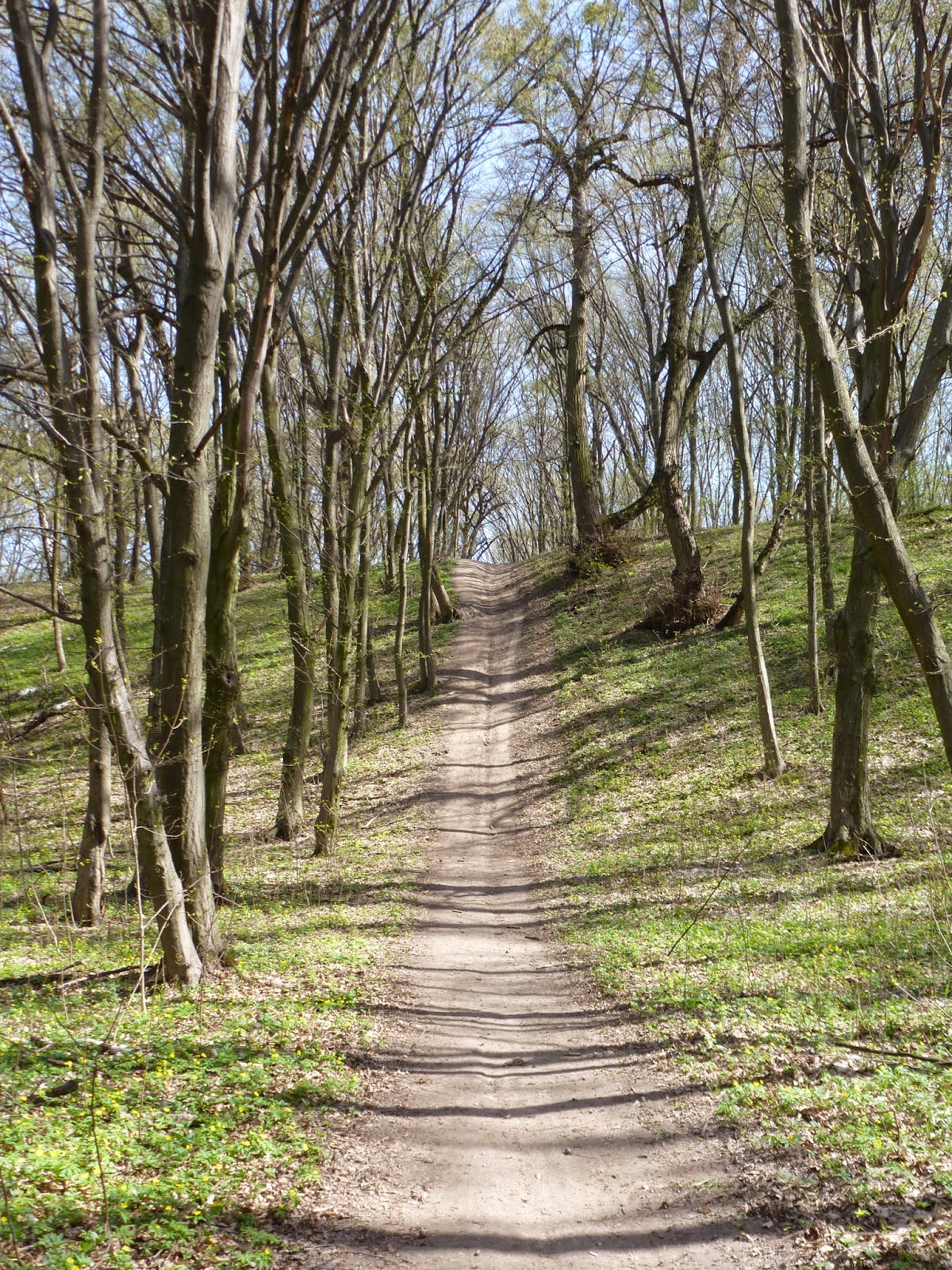 The trees started to thin out.  I ran down a scary steep hill, but the trail felt like it was not going the direction I wanted, so I turned right again.  Suddenly there were more people about, so I slowed to a walk.  A girl asked me for directions.  It didn't even matter that I couldn't answer her in Ukrainian.  And then I was at a pond!  This pond, the farthest west of the three in the middle of the forest park, had picnic pavilions lining its banks, and every single one was crowded with people barbecuing and celebrating Easter.  And the golden-domed church was there, except on the opposite side now.  I was past 7 miles, so I gave up and started to follow the road. 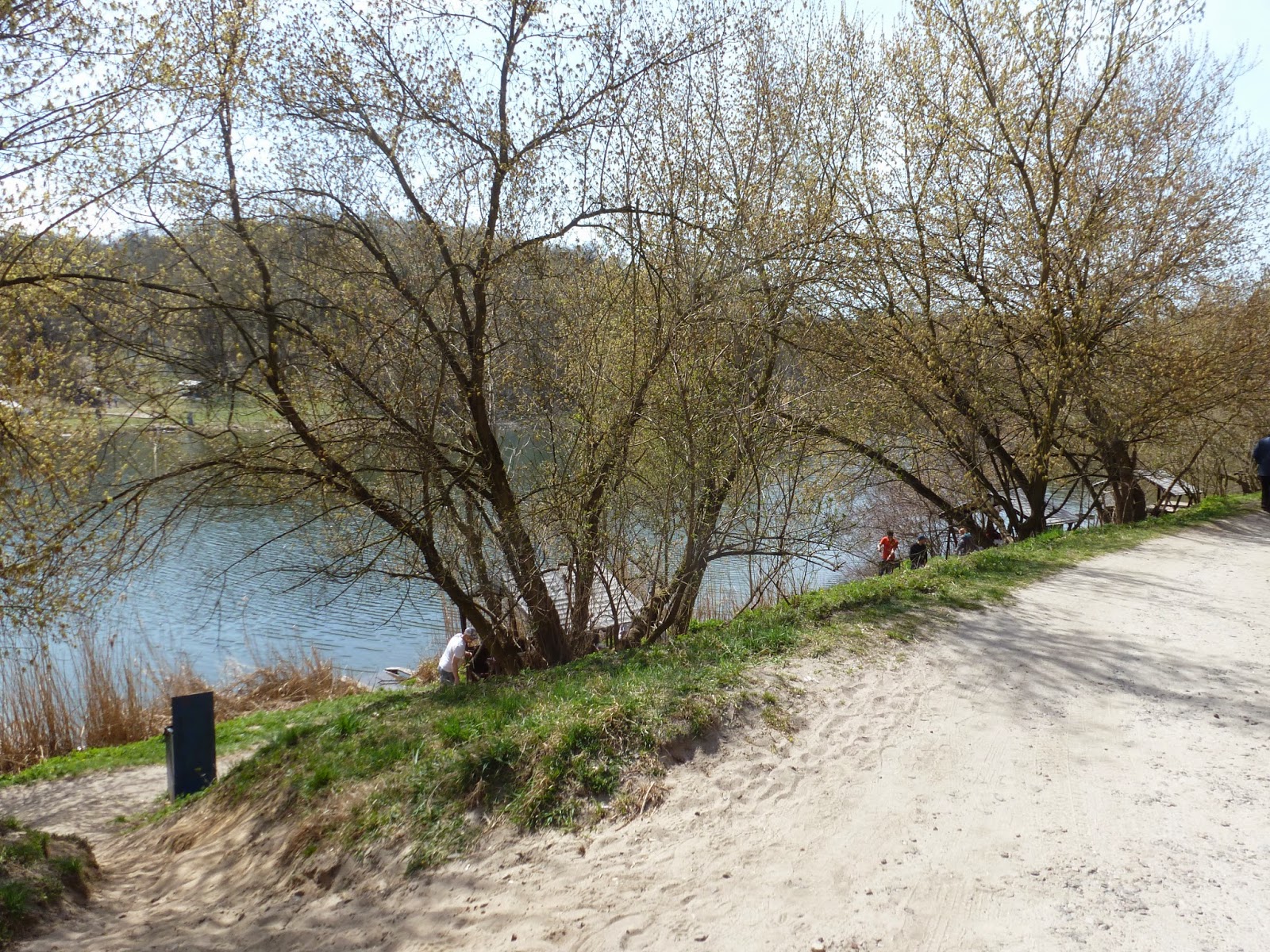 The road took me away from the ponds, past a couple cottages with laundry draped across lines under the trees and small gardens staked out for spring planting, and through the intersection with the street to the church.  The bells were loudly ringing, and I was like a salmon swimming upstream through the steady flow of people walking towards the church.  They thinned out when I came out at a plaza by a large, official-looking building.  (Turns out it was a university.  Just want one expects to find in the middle of a forest park.)

I felt like I should be going further west at this point, so I left the road behind and ran through the trees down another steep hill and popped out at a regular city park, with grass lawns and playground equipment and families everywhere.  But beyond that park, I could see a road and apartment buildings.  I crossed the park, and followed the road north.  And at 8.75 miles, I found myself standing on the corner where I started.  Not the plan, but at least I was no longer lost in the woods! 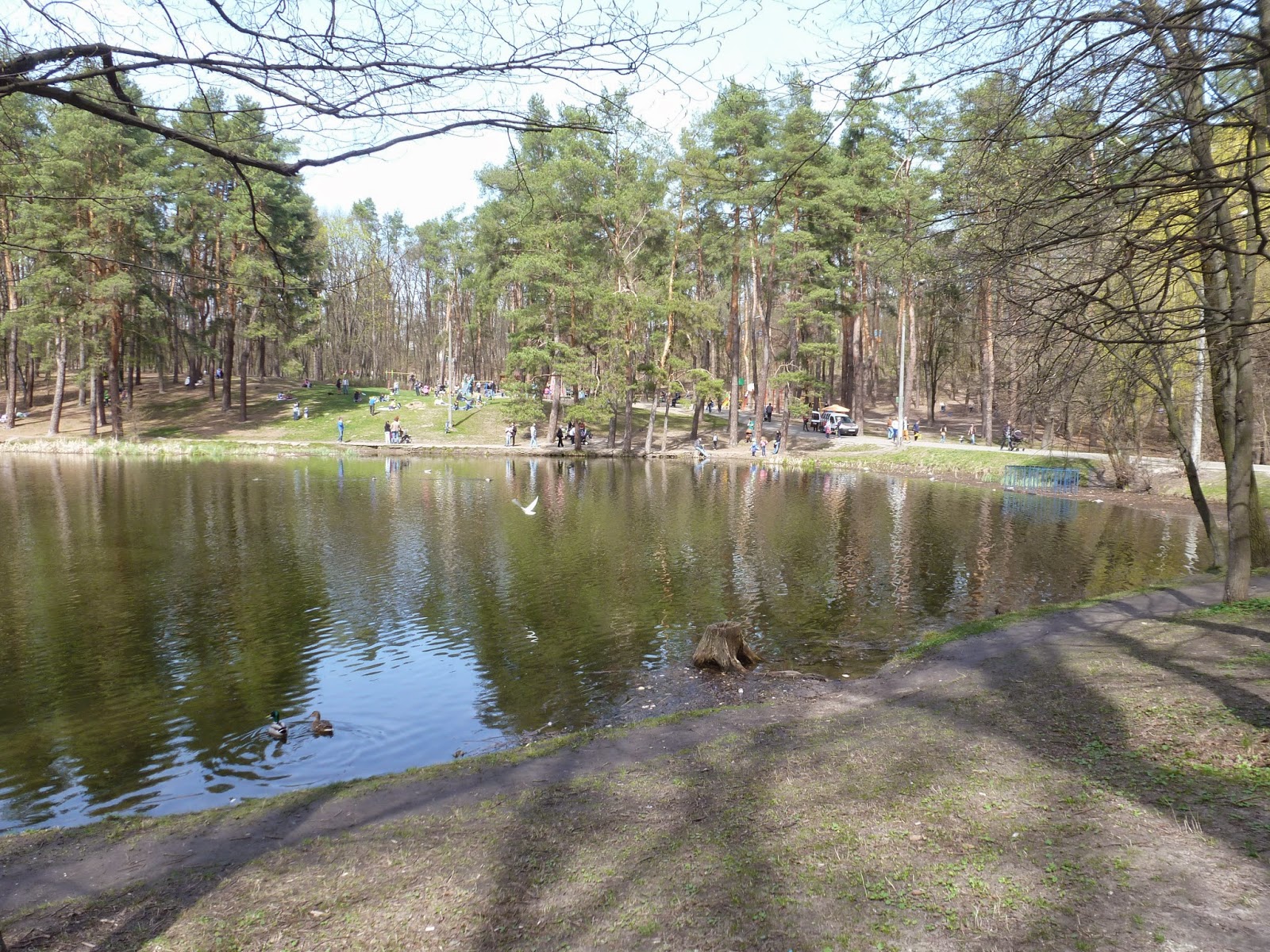 Turns out I almost ran to the Museum of Folk Architecture and Life of Ukraine, which is as far south in Holosiivkiy Park as you can go.  The gate threw me off and vectored me north, but I actually could have gone around it (I think it was just an observatory) and continued west.  I cut off an entire quarter of the park, so it truly is a wonderful place to put in a respectable amount of mileage without pummeling your legs on the unforgiving streets and sidewalks.  You can get there via public transport, so you can channel all your energy into your run.  And best of all--you're in the middle of Ukraine's capital city, but it only takes a few miles for you to find the peaceful solitude of quiet trees and dirt paths that makes for a wonderful trail run. 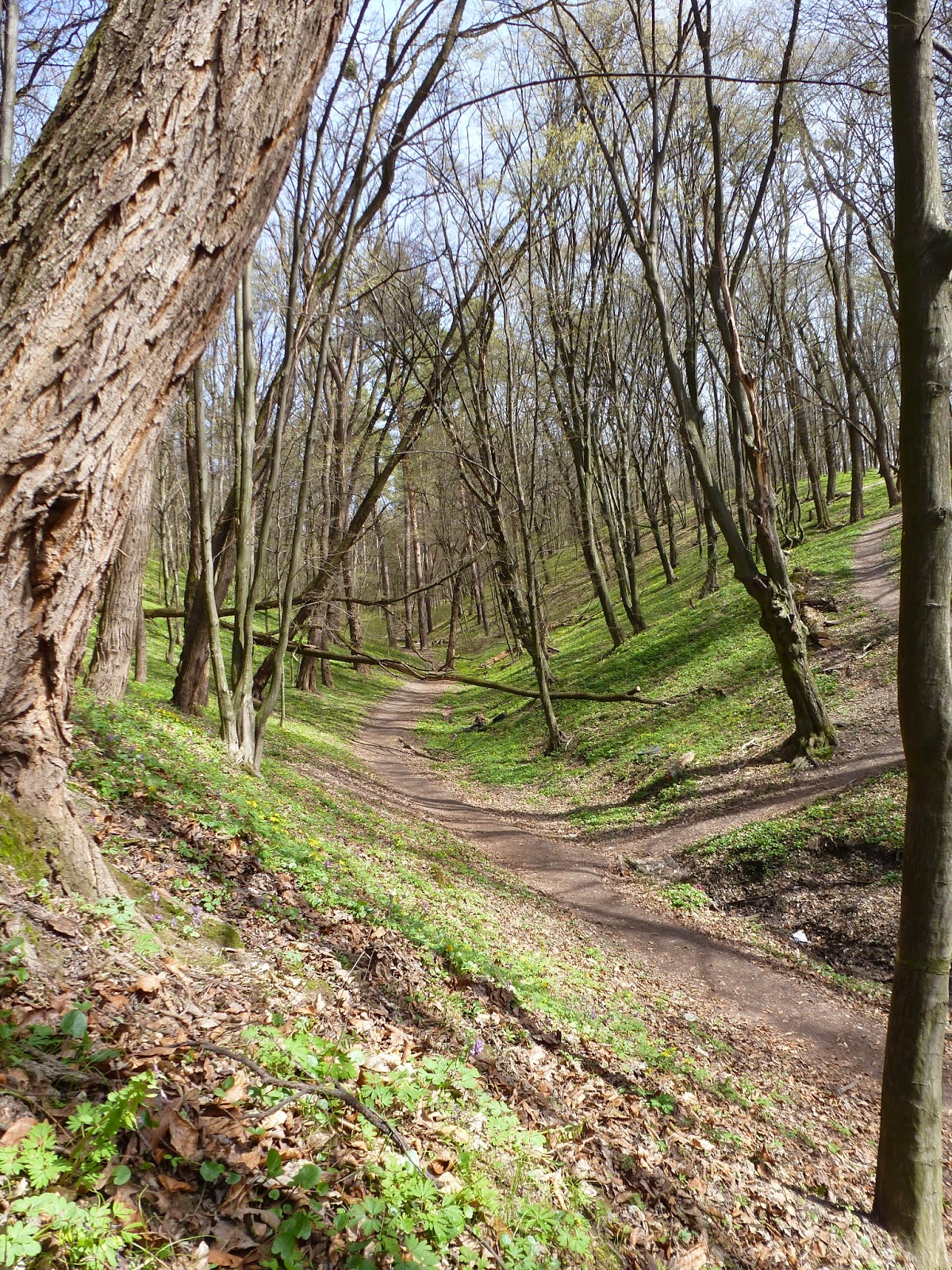 UPDATE: I went back for another trail run after the trees came back to life.  Check out what Holosiivskyi looks like in full foliage! 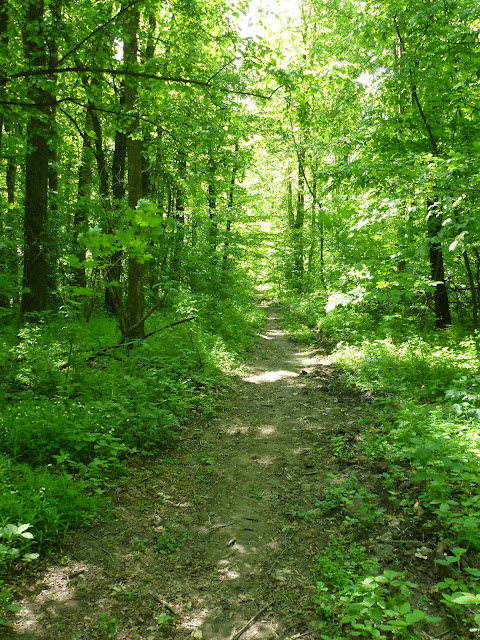 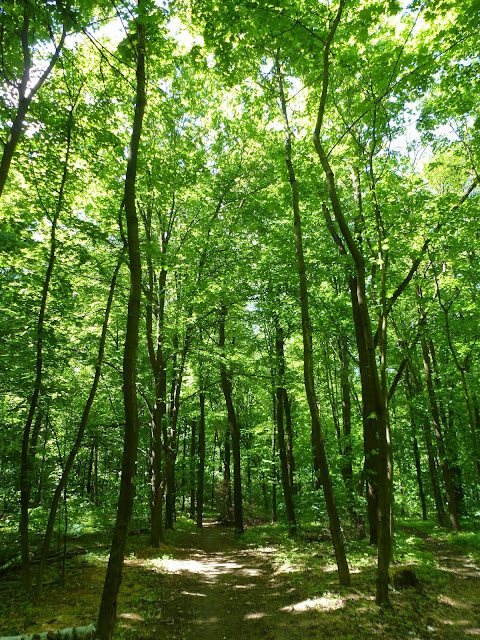 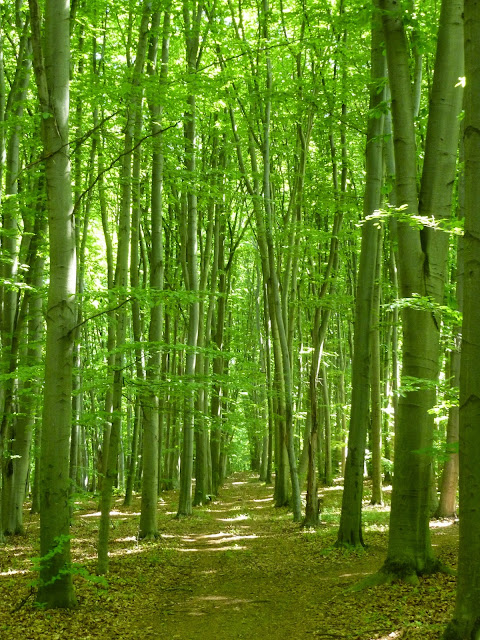 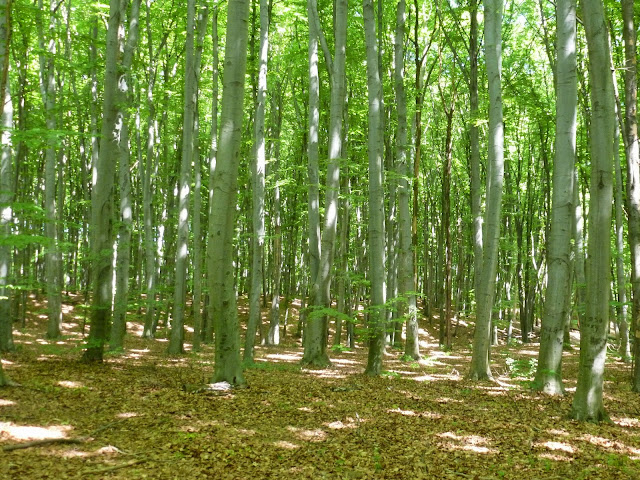 Logistics: Take the metro on the blue line to Holosiivska station.  Right across the street from the exit, you'll see a pond.  The northwest corner of the park starts there.  You can also get into the park by cutting through the abandoned Exhibition Center (now popular among rollerbladers and cyclists) near Vistavkoviy Center station.
Email ThisBlogThis!Share to TwitterShare to FacebookShare to Pinterest
Labels: running, Ukraine