I should have thought about what I expected to find before I got there.  A barren, rocky wasteland wholly unsupportive of any form of life, with curls of steam rising ominously from the ground?  People wearing space suits as protection from the radiation?  Squirrels with eight tails and cerulean fur?

I didn't think about it.  I've made up those graphic options in the last five minutes.  But I know that what I did find wasn't what I was expecting, despite how ill-defined those expectations may have been.

After all, Chernobyl is the site of the worst nuclear disaster of the 20th century.  Hundreds died as an immediate result, thousands still suffer long-term effects, and hundreds of thousands were forced into unwanted new lives as all human inhabitants within thirty kilometers in any direction from the plant were evacuated and relocated.  A thriving young city, less than twenty years old and with a population of almost 500,000 people, became a ghost town in a matter of hours, and remains so to this day.

Nuclear radiation wreaks havoc on the human body.  It's not exactly easy on animals either, but give Mother Nature a little time, and she'll always prove that she's far more resilient than we are.  The thirty kilometer evacuated area around the plant became the Chernobyl Exclusion Zone, a permanent fixture banning humans from living in the area and thereby a de facto wildlife preserve, which gave Mother Nature a leg up with her recovery. 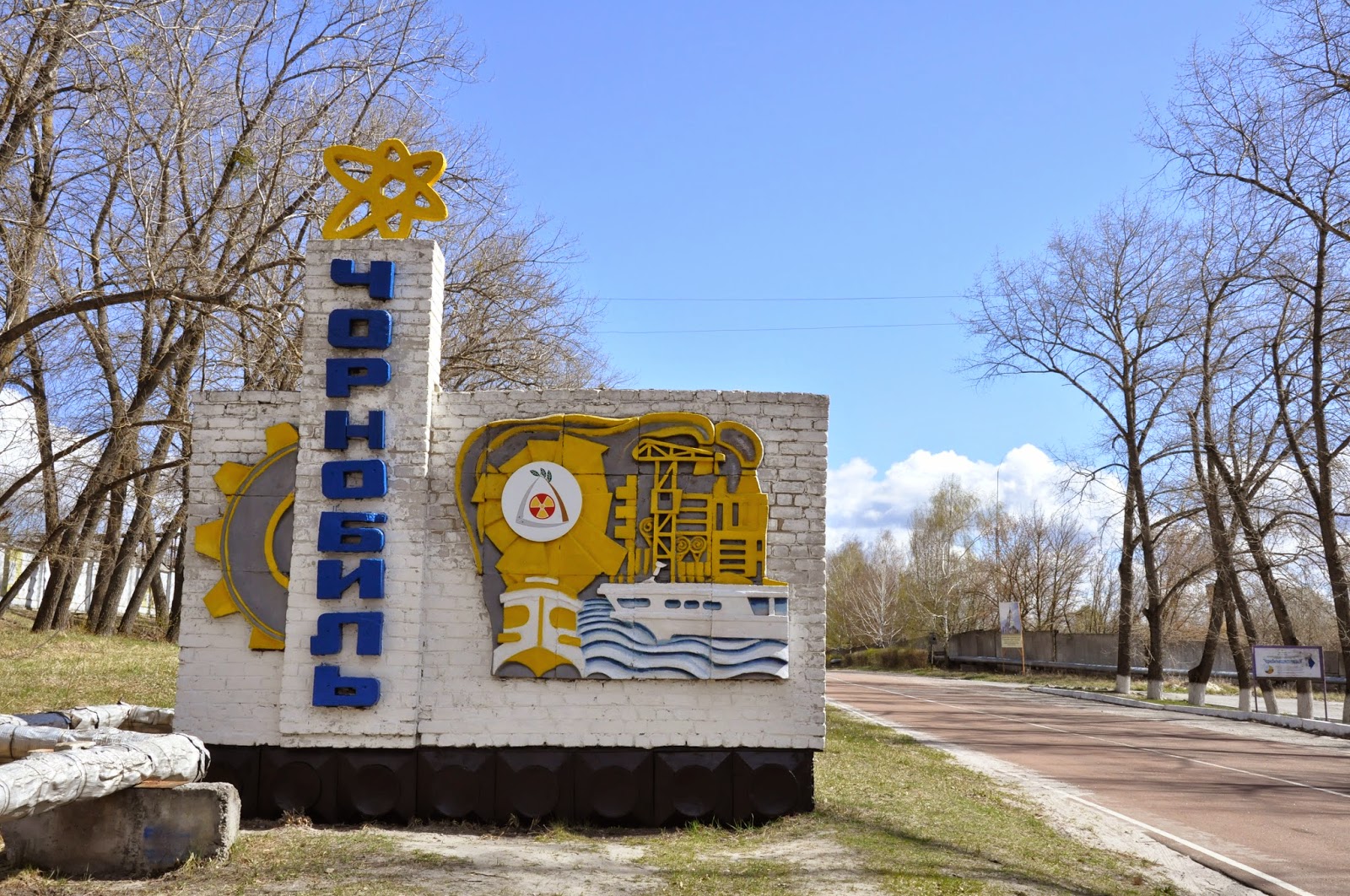 The forest in the Exclusion Zone appears to be thriving.  The road to the power plant passes through small settlements and the town of Chornobyl*.  The bare branches of spring trees allow glimpses of abandoned homes tucked away in the woods; come summer, these homes will vanish completely behind a dense screen of leaves and needles. 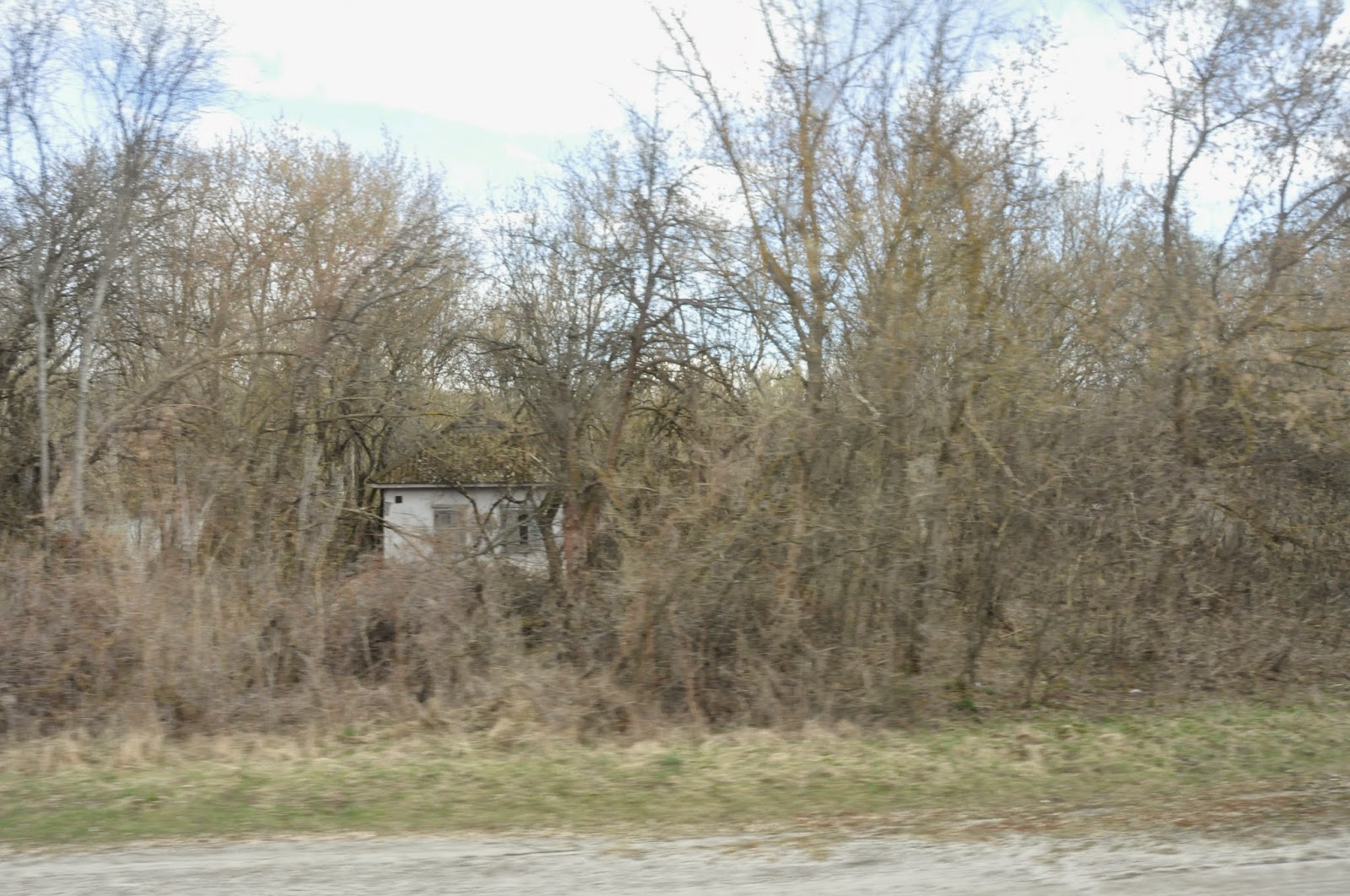 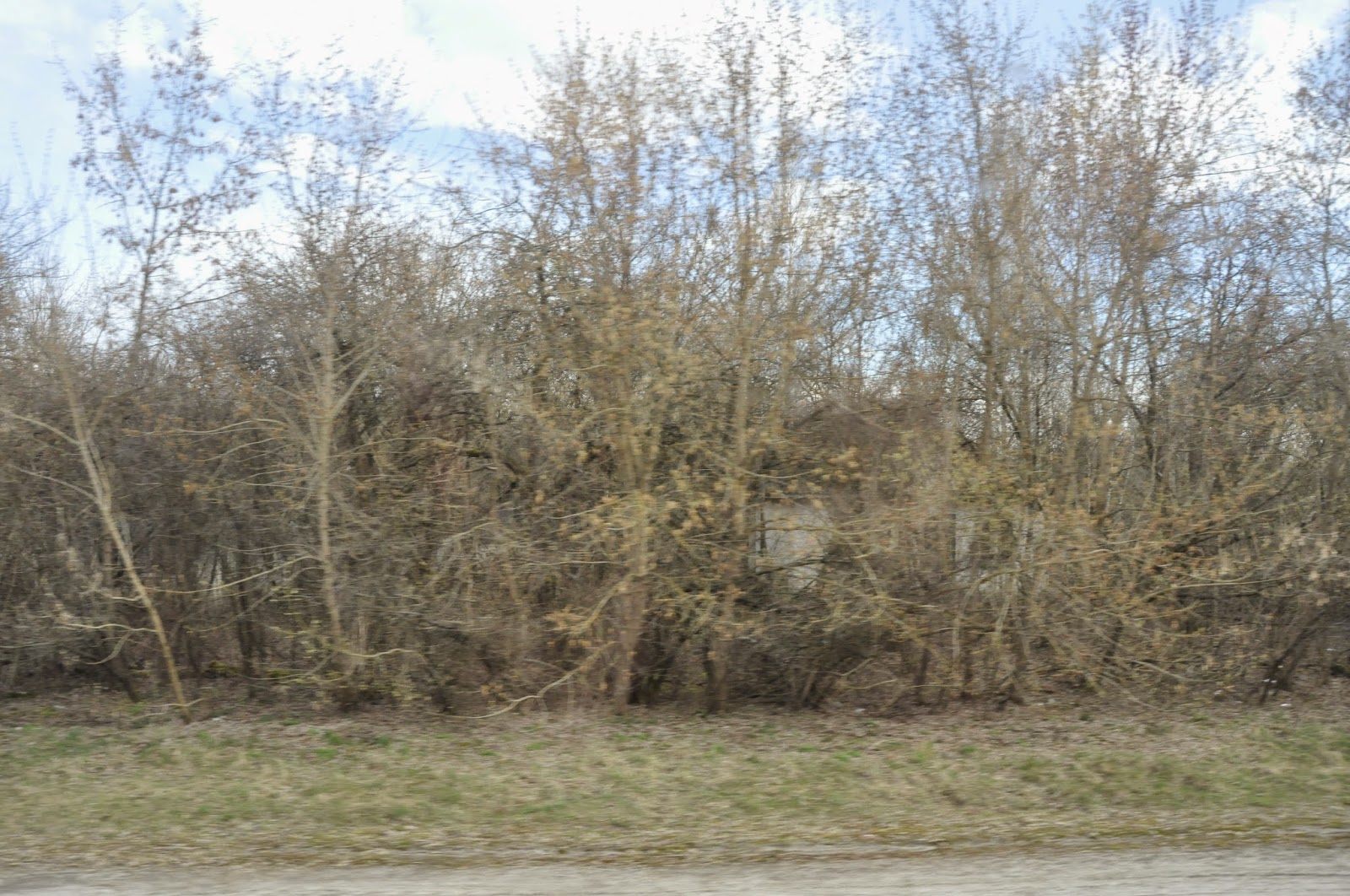 Chornobyl town is still somewhat active, with a fire station, a hotel and restaurant, a church, and lodging for the laborers who rotate through the plant as they continue to work to contain the contamination.  But that transient population is a sliver of what used to be, and the forest is moving in on the streets lined with homes that haven't felt the footsteps of an inhabitant for decades.  Paint peels, fences rot, and vines grope their way through broken windows. 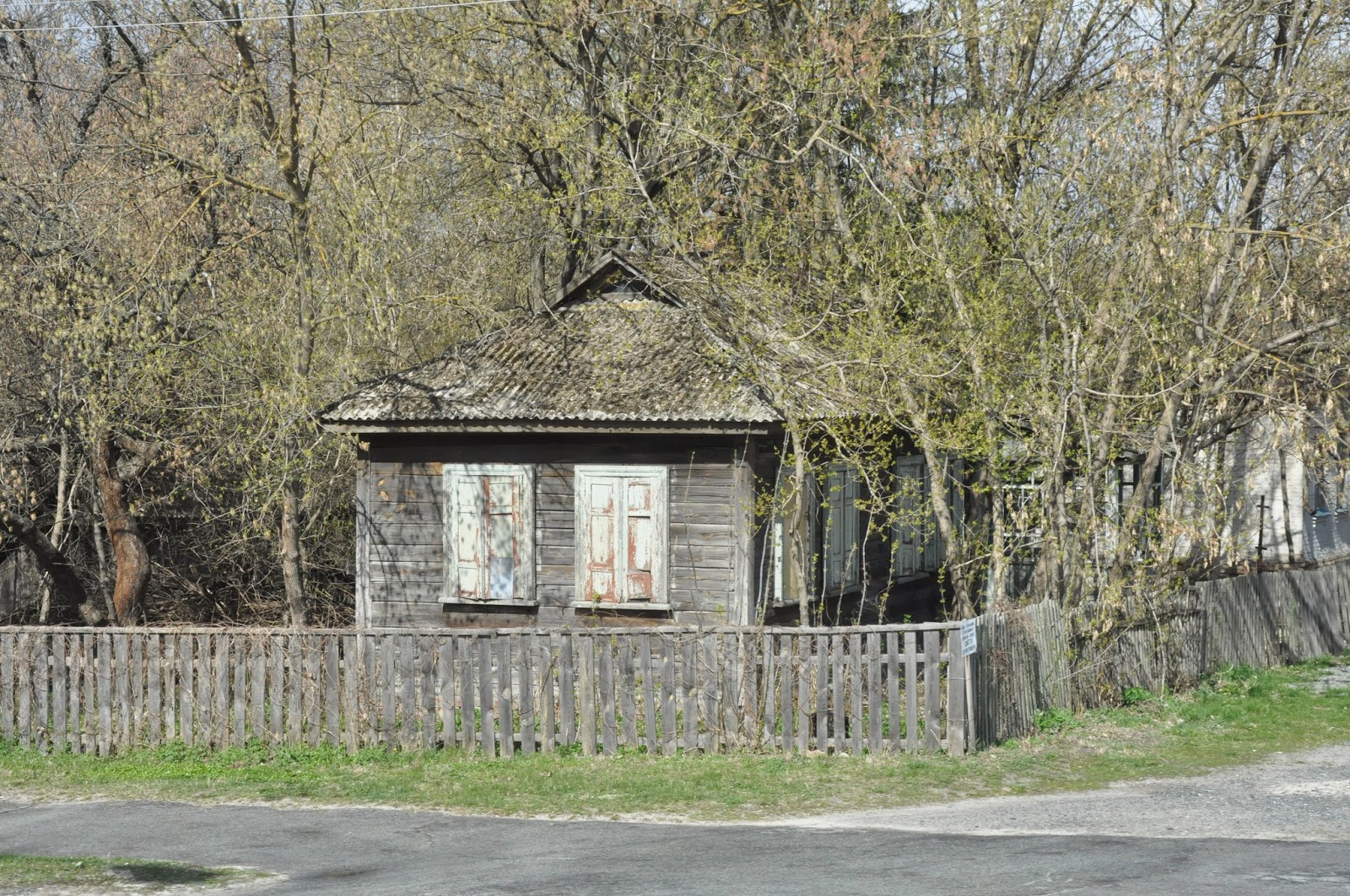 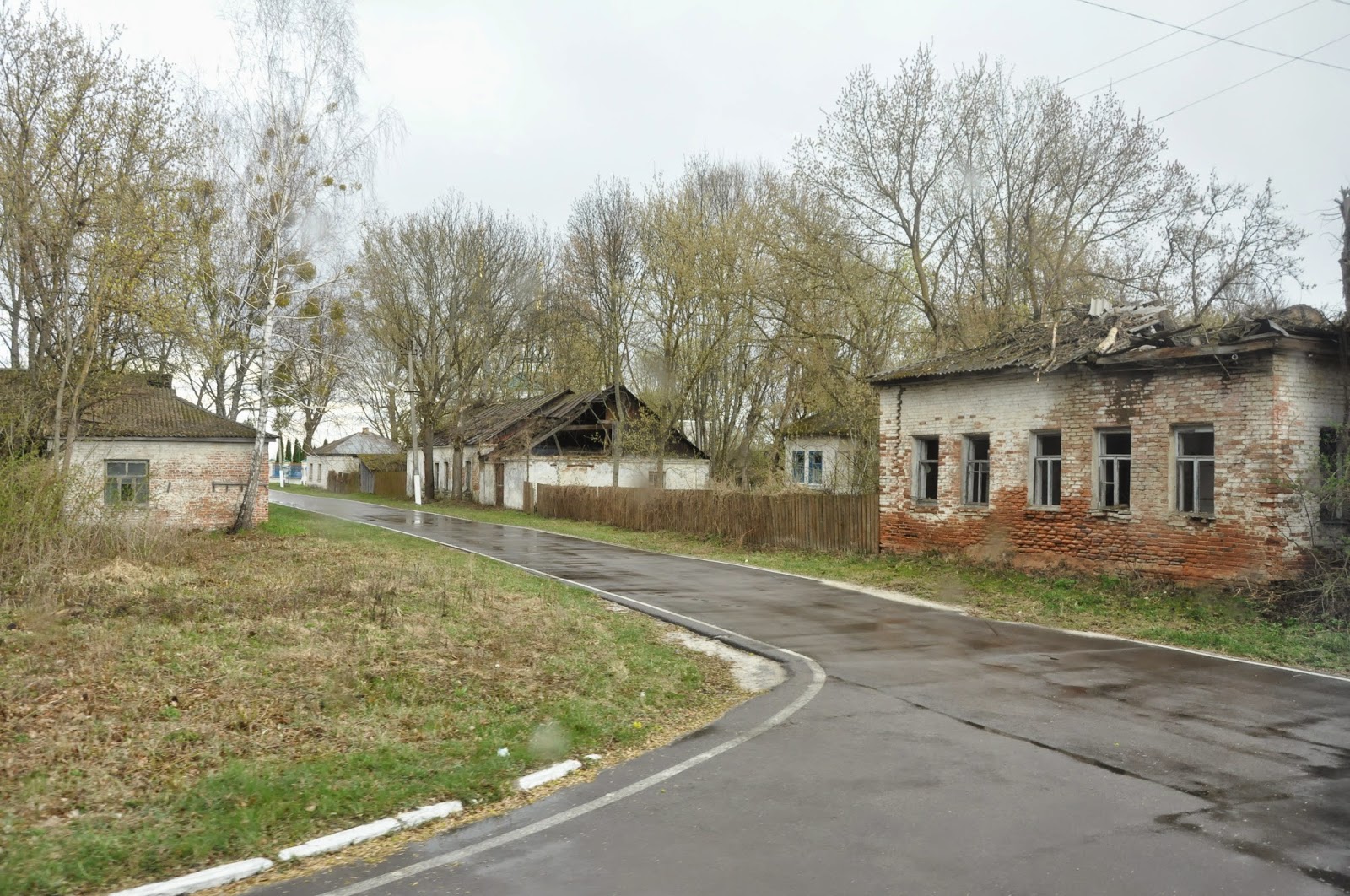 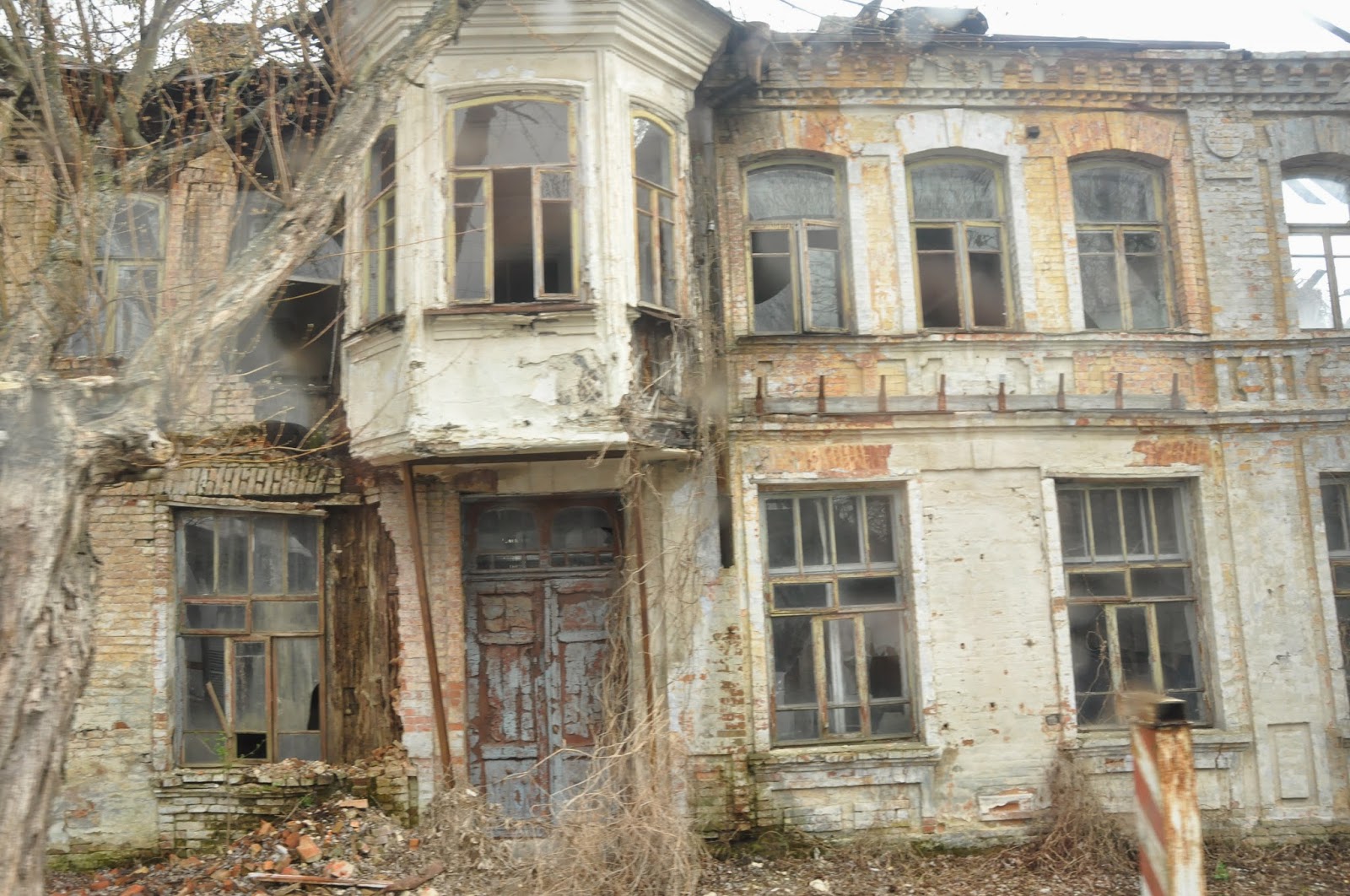 Not even great military secrets are safe from the inexorable creep of Mother Nature.  Within the Exclusion Zone, and unknown to the outside world at the time of the catastrophe, sits one of two radar sites established by the Soviet Union to detect ballistic missile launches from their enemies (i.e. the United States).  The radar is massive.  It's a string of maybe 20 towers, each over 100 feet tall, standing sentinel in a row at least a quarter mile long.  The site is so large, there was a one-street town built nearby for the associated military personnel and their families. 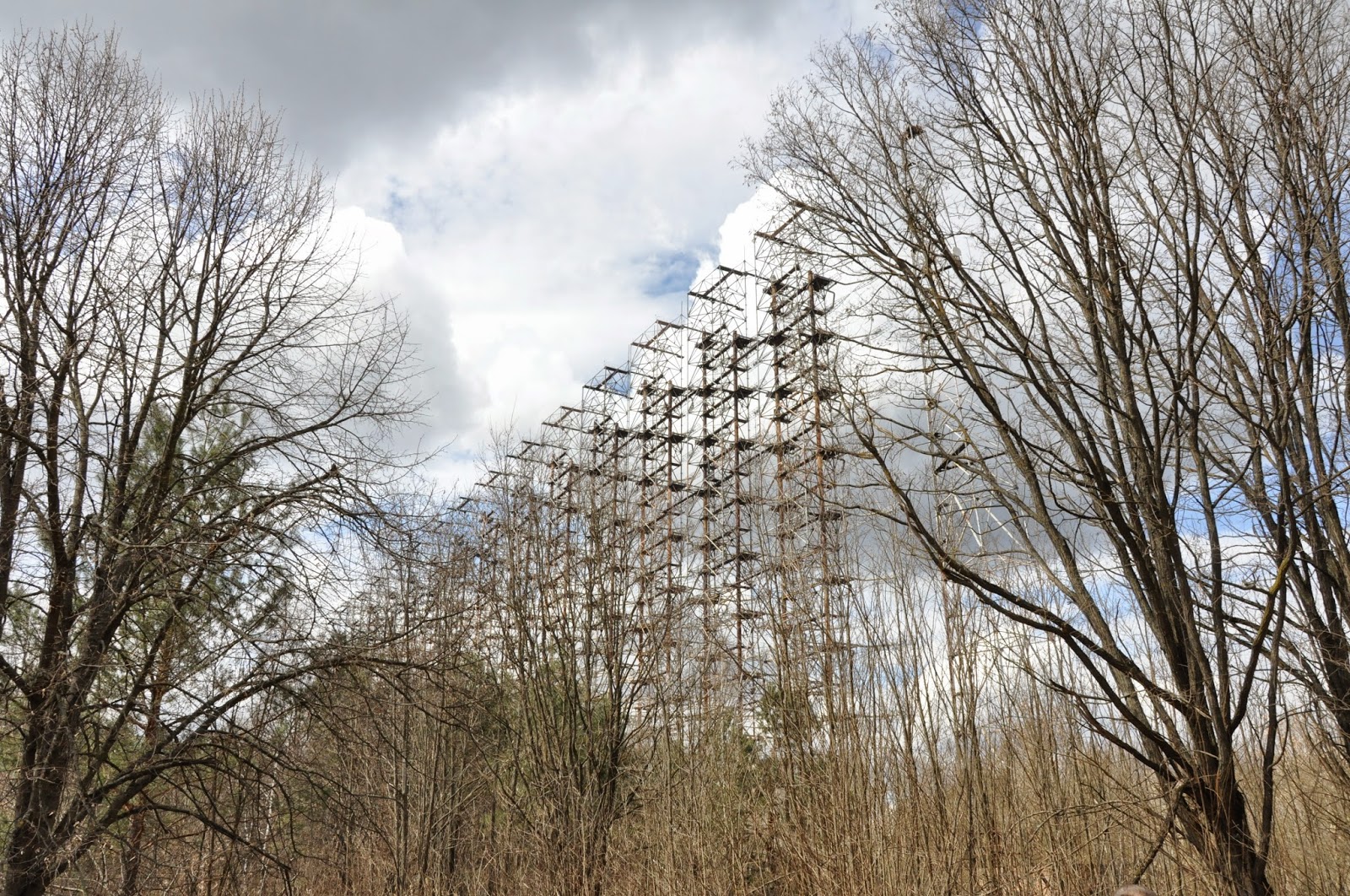 Now, the radar presides over nothing but birch and pine, towering above the tall trees like an alien Gulliver.  Rust creeps up the silver rails, but it will take years for the forest to bring down these behemoths.  In the meantime, it has made short work of the small settlement huddling in the radar's shadow. 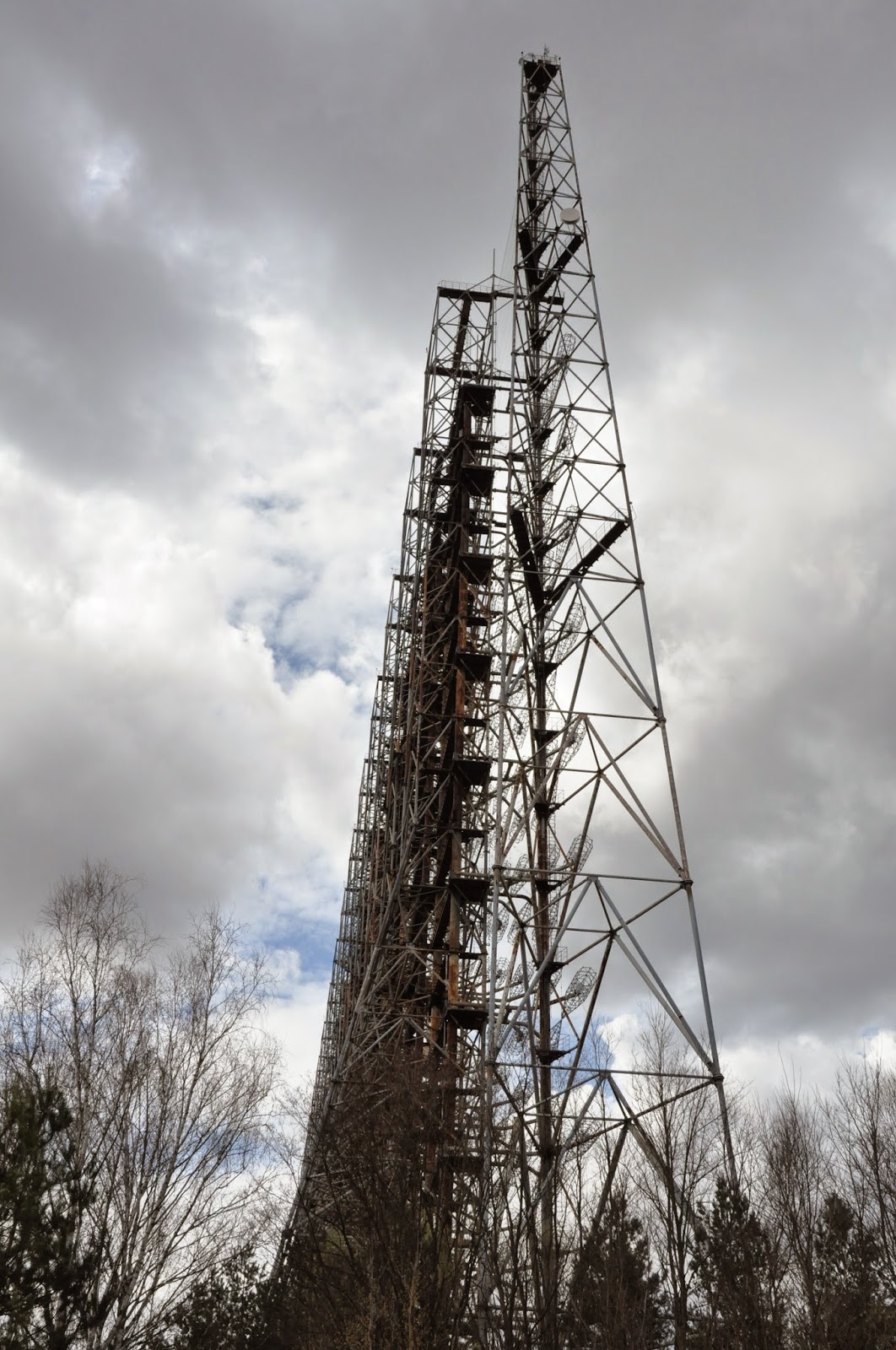 Small pines sprout proudly on rooftops and balconies, glorying in the lofty view it would otherwise have taken them years of growth to achieve.  Tree branches engulf cement buildings, slowly breaking them down like the structures are being swallowed and digested by some monster.  Rusty barrels sit in a pile with streaks of white smearing down from perforations in their metal hulls, and I do not want to know what is leaking. 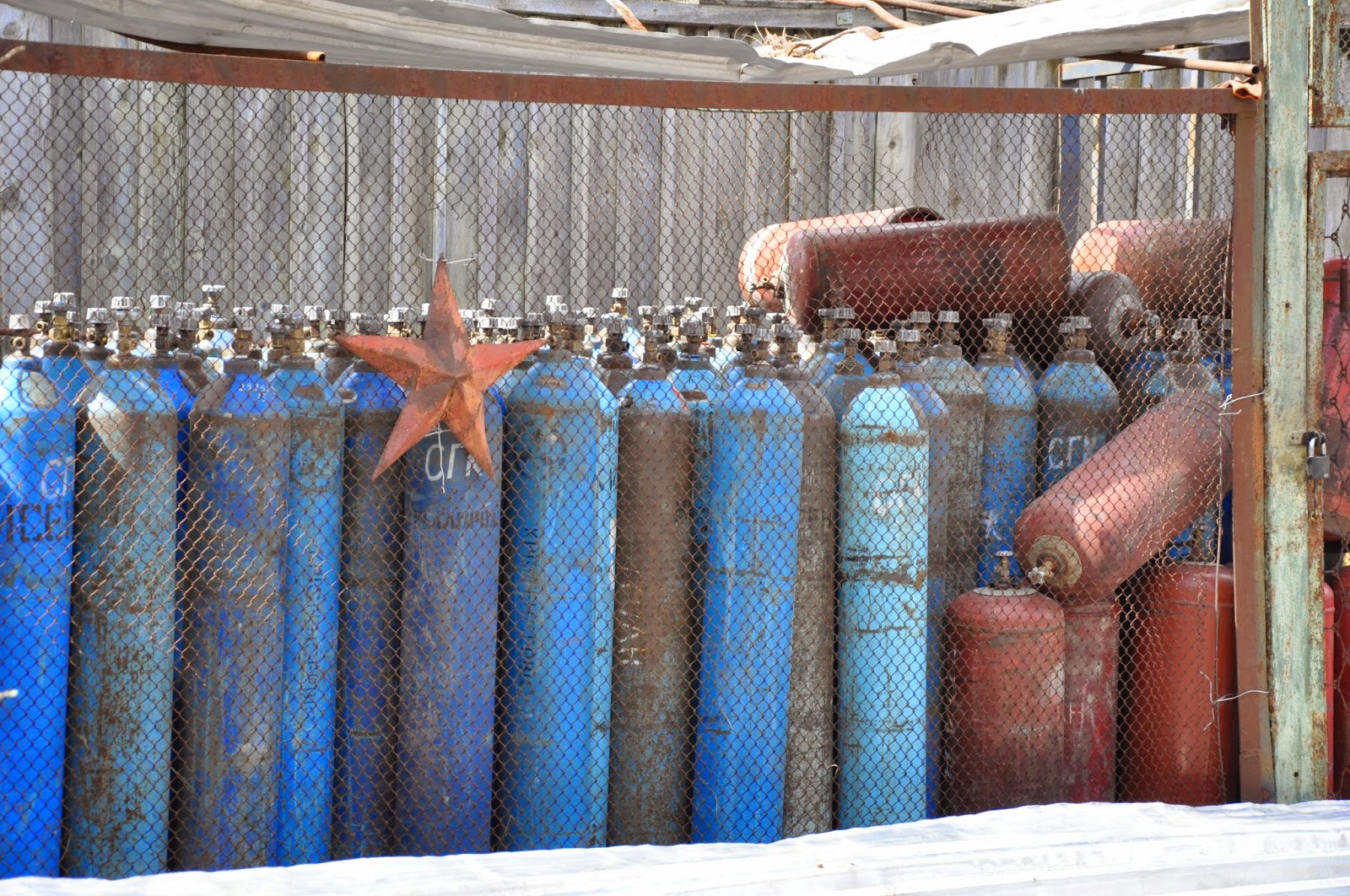 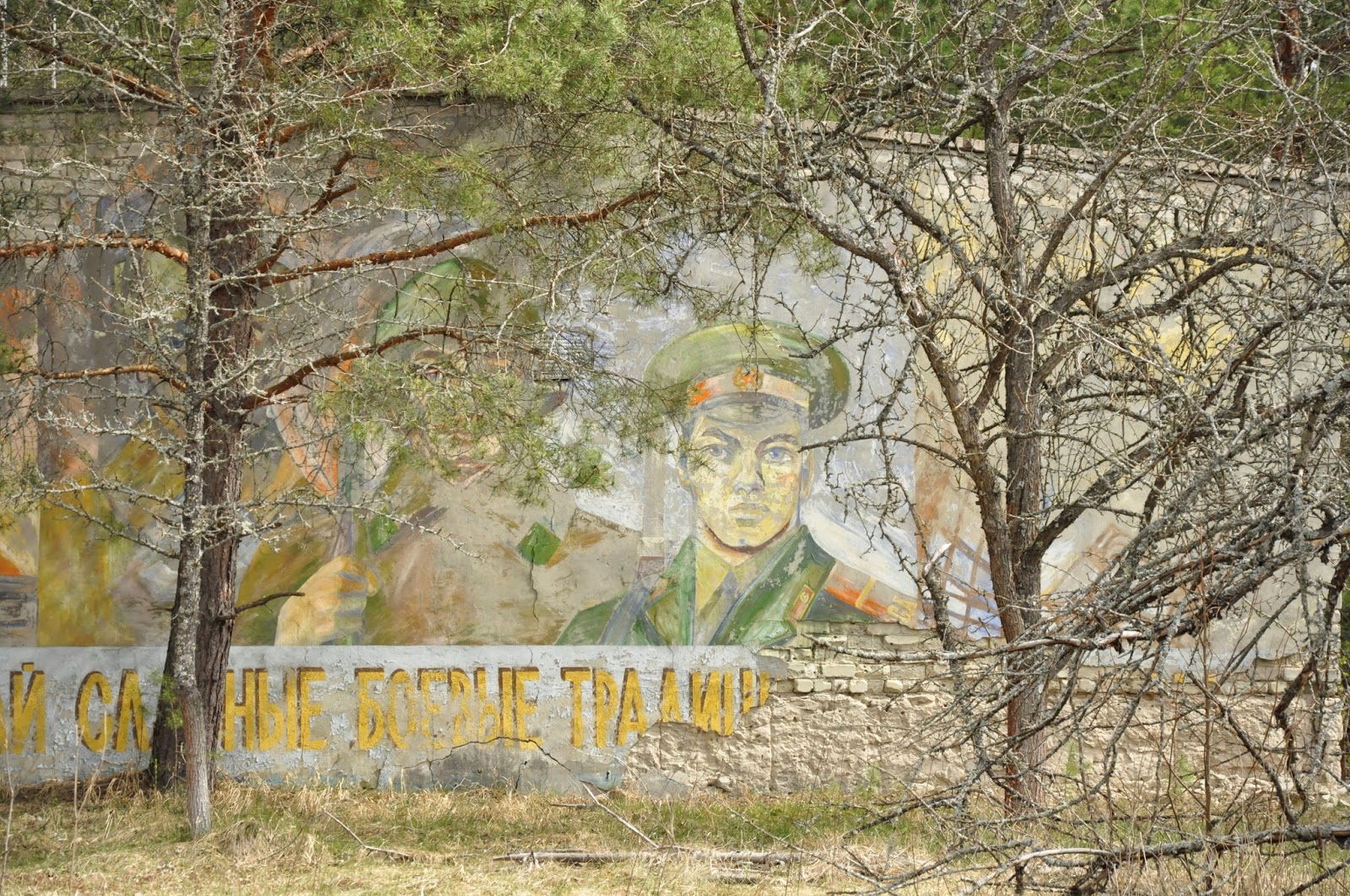 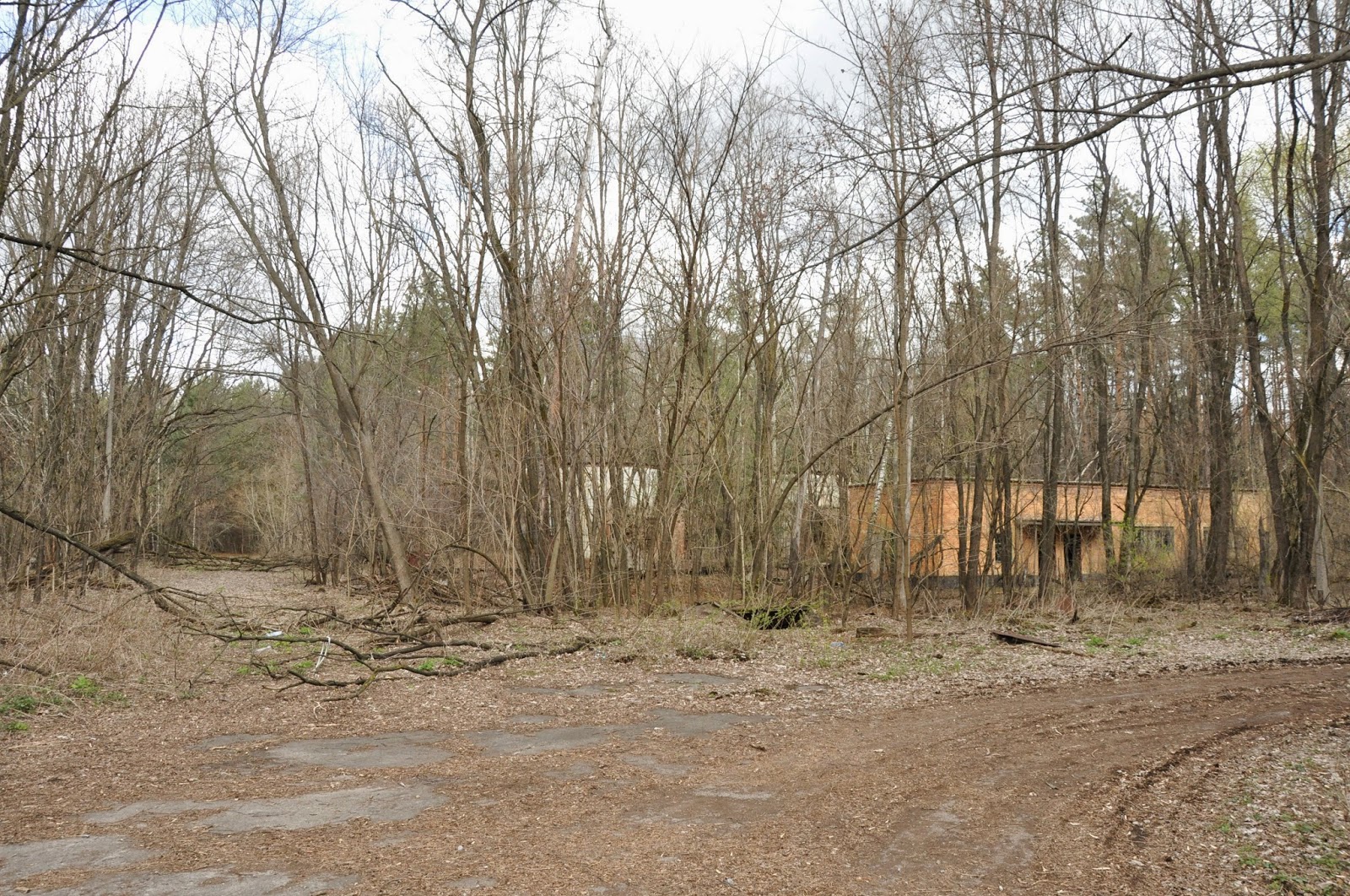 As we approach the nuclear plant, we watch the numbers go up on the Geiger counter carried by our guide, Igor.  It registered 0.8 at the radar site; now it's showing over 2.0 as we stand at a bend in the road next to the river and the power plant comes into view a couple kilometers away.  We've just passed a construction site bustling with activity--one of the only areas in the Exclusion Zone where man is keeping Mother Nature at bay with bulldozers and cement as a U.S. company works on the facility that will ultimately provide dry storage of the remaining nuclear material. 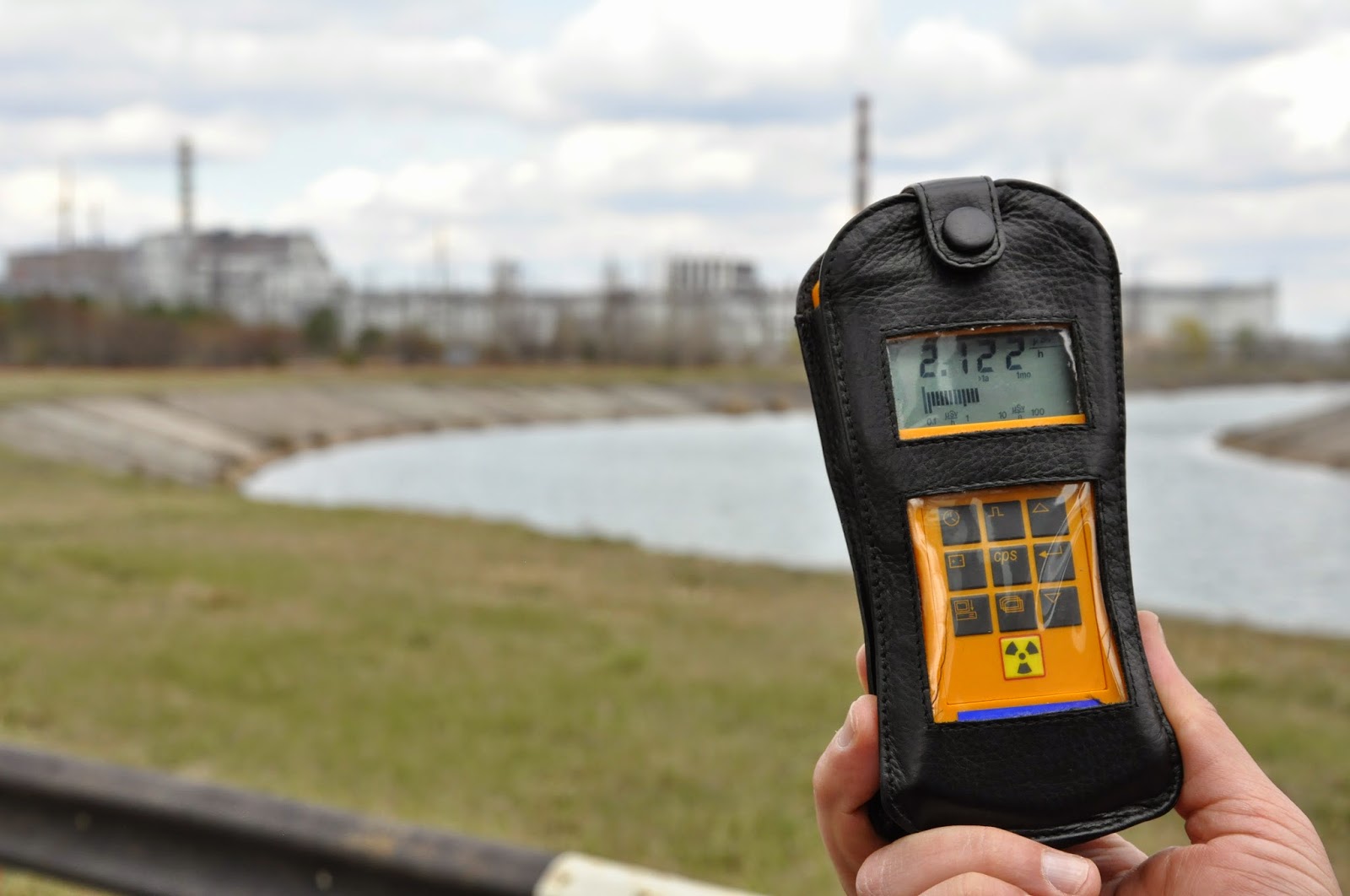 The river doesn't look particularly murky or slimey, and there are plenty of fish.  One bizarre highlight of stopping by the nuclear power plant is a quick visit to see the giant catfish near the main entrance.  Giant.  Over four feet long.  See the critters in the bottom left corner of the photograph?  Who wants to go noodling and come up with that clamped onto their arm?  I have absolutely no idea if it's normal for catfish to grow to this size, but it's easy to reason that nuclear radiation morphed these fellows into super-catfish. 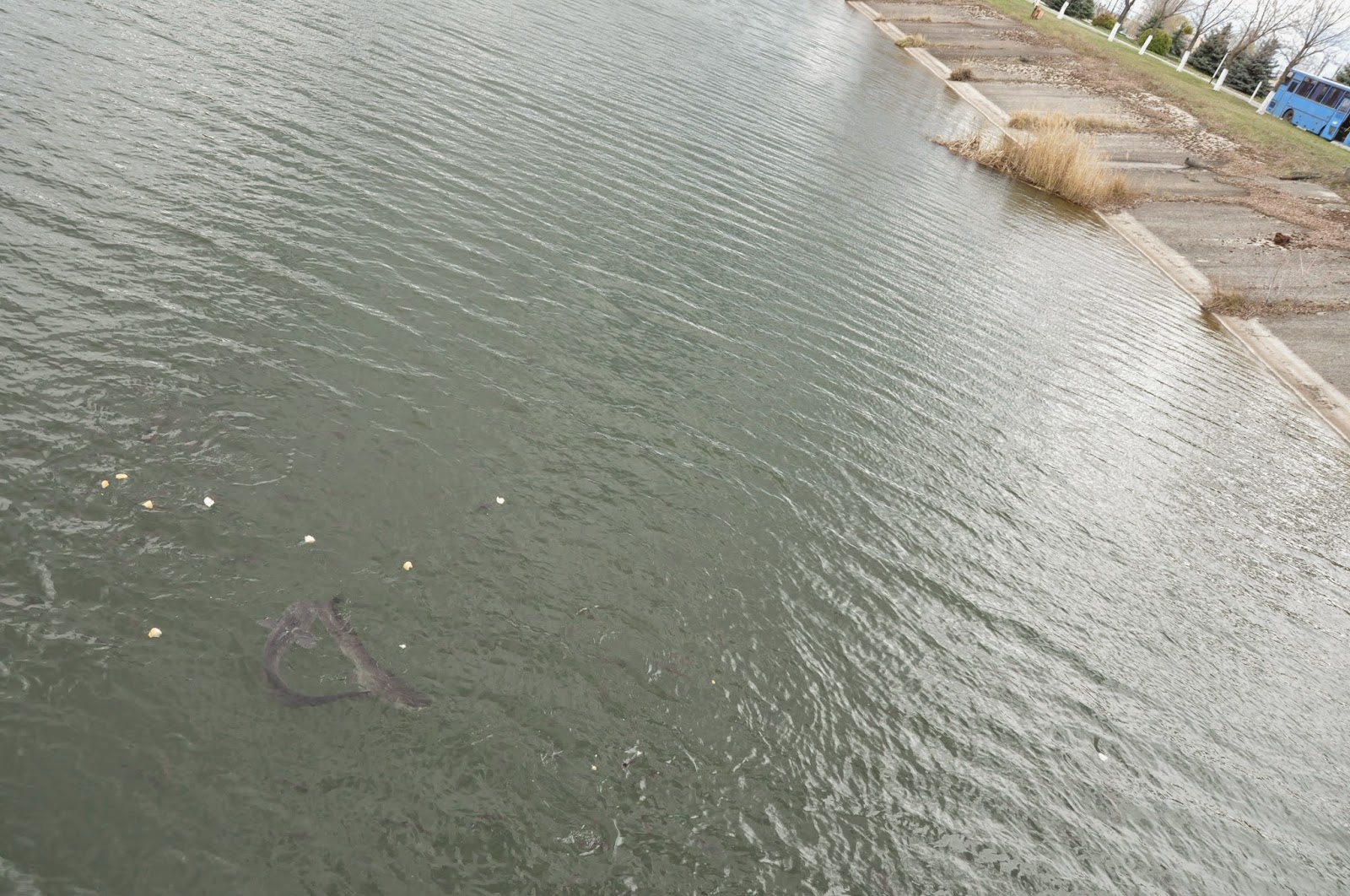 Chernobyl Nuclear Power Plant is rusty and crumbling, but very clearly not dead and abandoned.  In fact, after the disaster in Reactor 4 occurred in 1986, the rest of the plant continued to operate for another 15 years!  The last active reactor, Reactor 3, finally ceased to operate in 2000.  Now, the plant is being decommissioned and containment projects to combat the radiation from Reactor 4 continue. 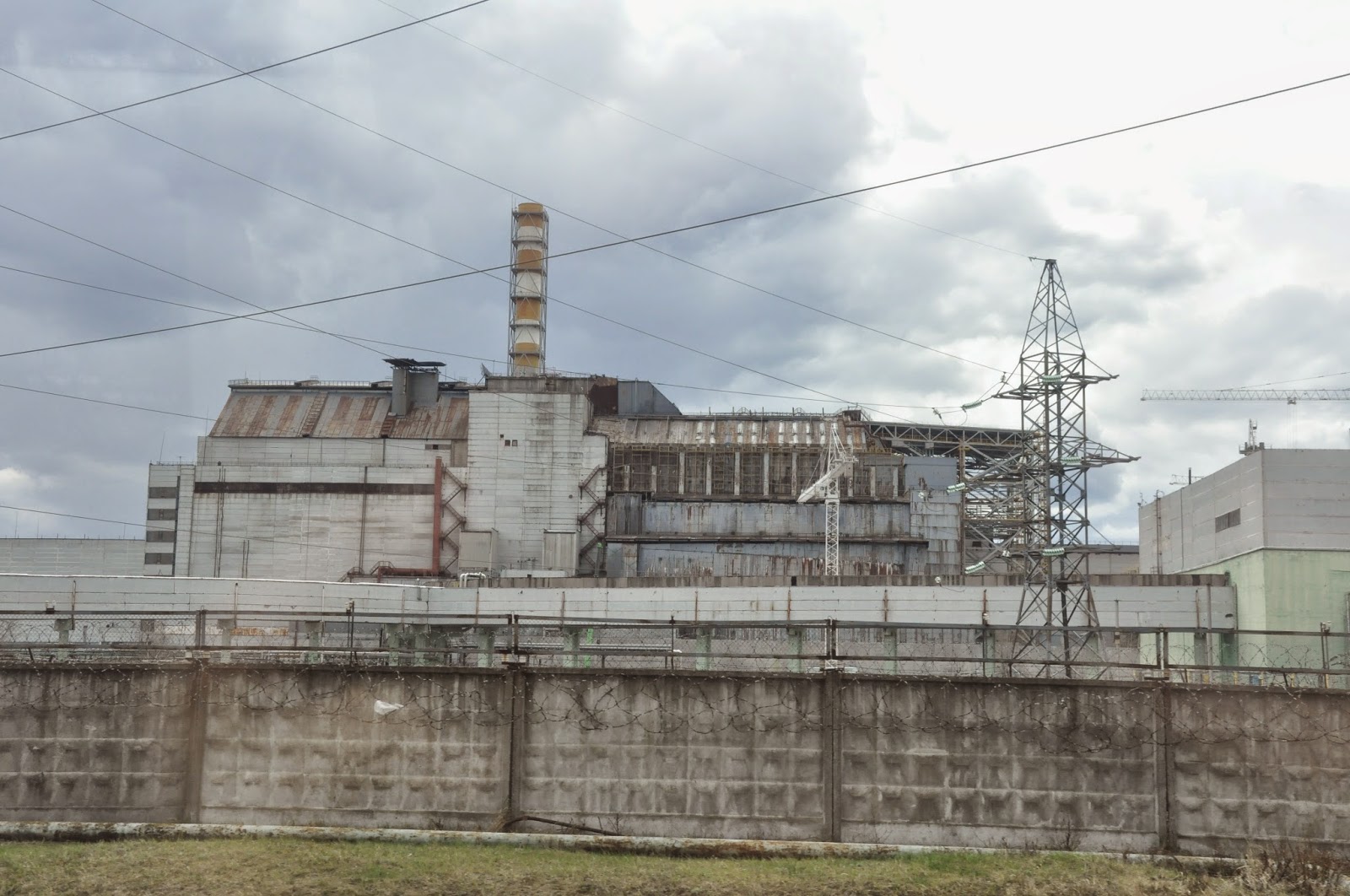 Reactor 4 will be a hot zone for a millenium.  In the immediate aftermath of the 1986 catastrophe, it was encased in cement to contain radiation and allow the other reactors to continue to operate.  Now, a new containment device that looks like a massive airplane hangar is being constructed adjacent to the plant.  When it's completed, it will slide forward to encase not only Reactor 4 but the entire plant. 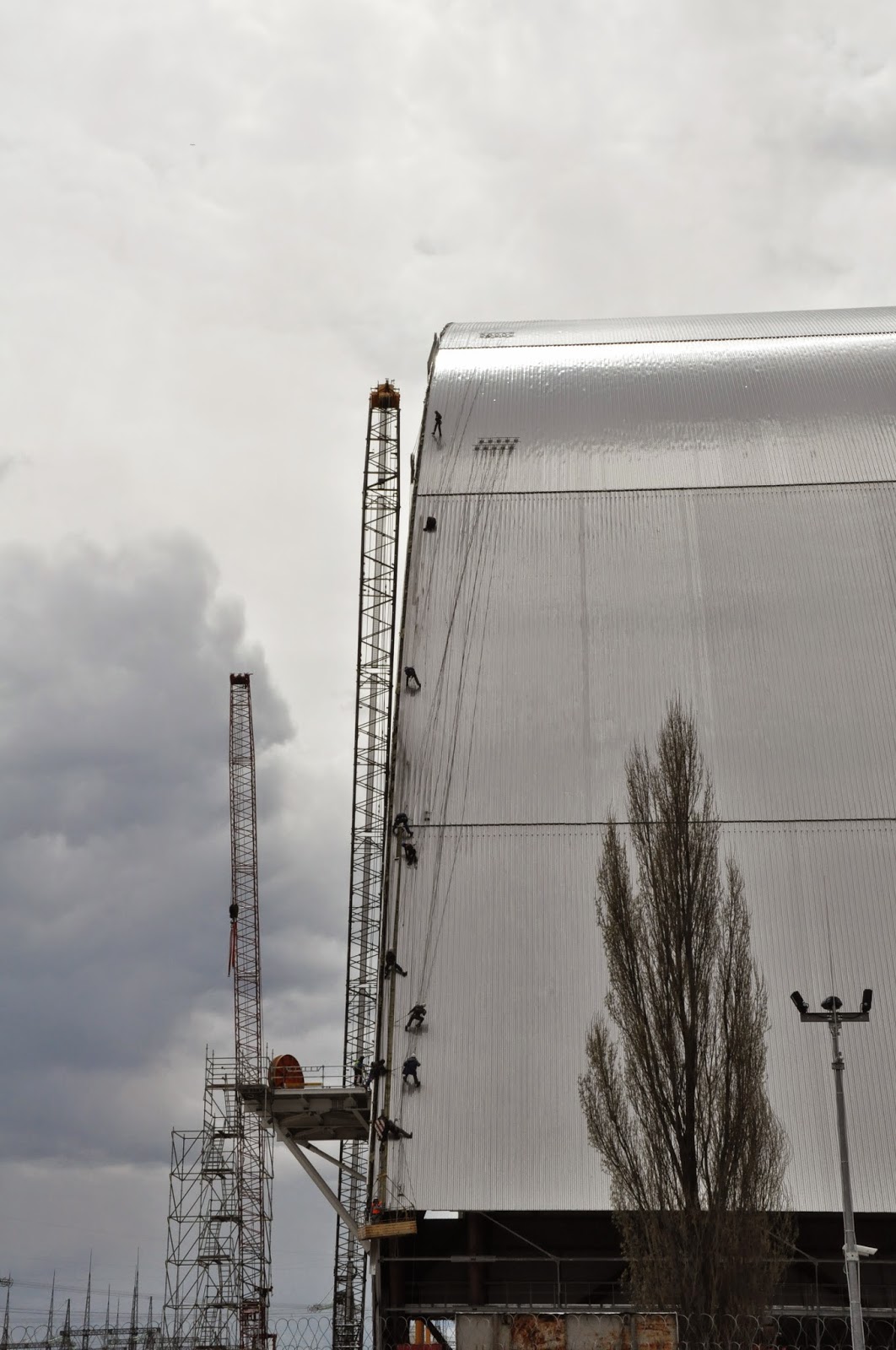 The Geiger counter went over 8.0 in the parking lot outside the security gates leading to the new containment device.  Their daily doses are elevated but not lethal, at least in the short-term, so the workers are rotated into the Exclusion Zone for a specific period of time, and then are required to leave for a few weeks to decontaminate. 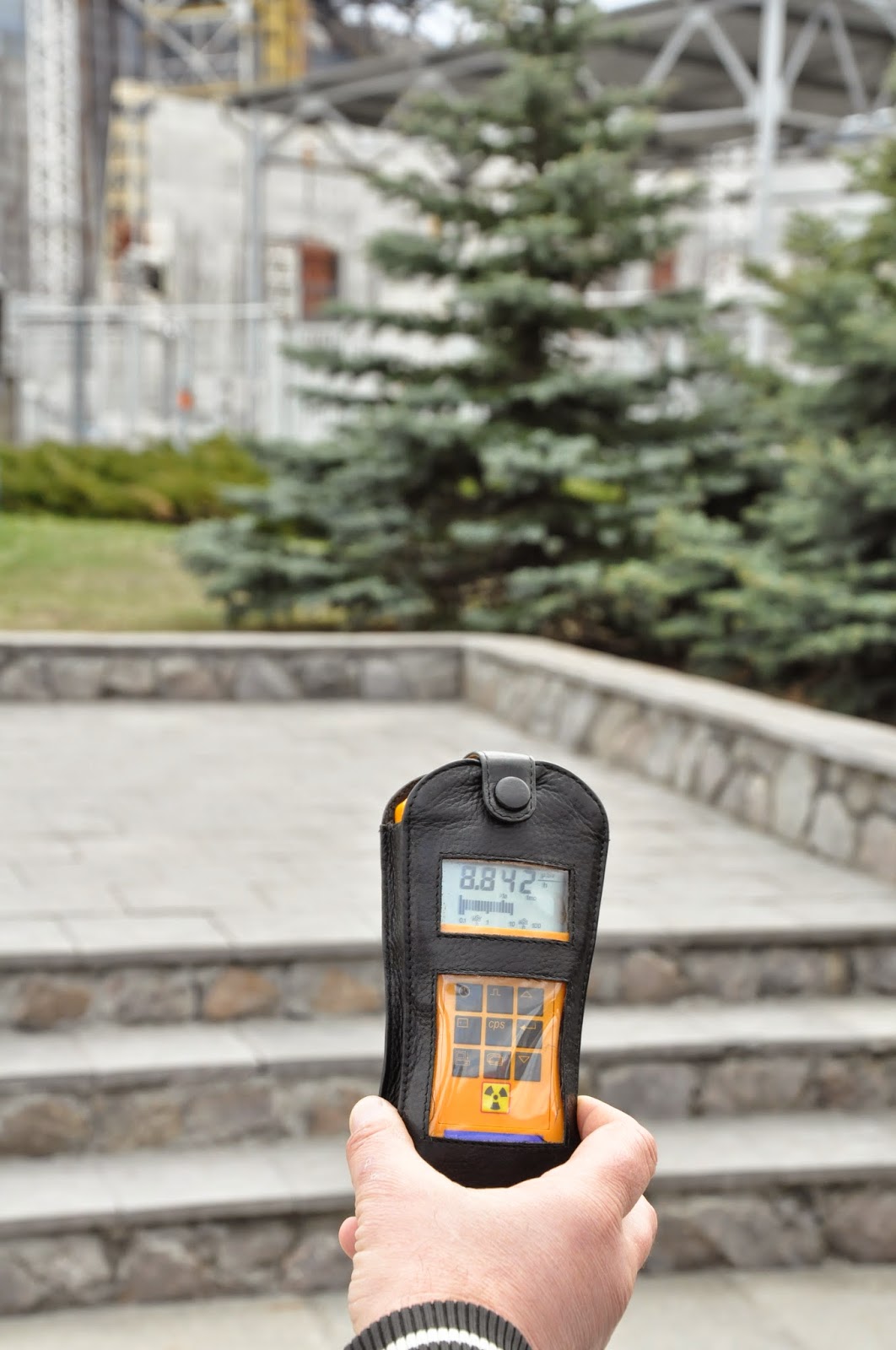 Chornobyl presents a strange dichotomy of life and death.  From the human perspective, the Chornobyl Nuclear Exclusion Zone is a dead zone, littered with broken towns and discarded accouterments of civilization.  It's Mother Nature that keeps the good news stories alive for Chornobyl.

Despite the poison that takes so long to dissipate, the plant life is doing well.  The fish are not floating belly-up down the river.  Large mammals like Red Deer and Moose (as they're called in North America .... 'elk' to Eurasia) don't have to worry about running into people, although they do have to be concerned about grey wolves.  There are even bears.

But most amazingly of all, the Chernobyl Exclusion Zone is home to a flourishing herd of the only wild horse species left in the entire world.

Brain boggled?  I know mine is, and I've had days to process this incredible information.  Seriously, I would have been less shocked if a Tyrannosaurus Rex came stomping out of the woods throwing sections of the derelict military radar at the tour bus than I was when Igor said "Przewalski."

There are two living subspecies of wild horse (Equus ferus) on Planet Earth at this very moment: Equus ferus caballus, which is the modern domesticated horse (including "wild" aka feral aka descended-from-domesticated horses like mustangs, brumbies, etc), and Equus ferus przewalskii, known as the Przewalski's horse or Mongolian wild horse.  It's pronounced either 'preh-zhe-VAL-ski' or just 'zhe-VAL-ski,' whichever your prefer.  These horses are native to the steppe, but in the late 19th century, a wealthy French chap brought a handful of them to his property in southern Ukraine.  He had quite a collection of animals, and fortunately his zoological park survived the turmoil of the last century to exist today as an amazing nature preserve called Askania-Nova.  It's the home of the largest captive breeding program for Przewalski's horses.  In the 1990s, a group of horses from Askania-Nova were shipped north to see how they might fare in the Chornobyl Exclusion Zone. 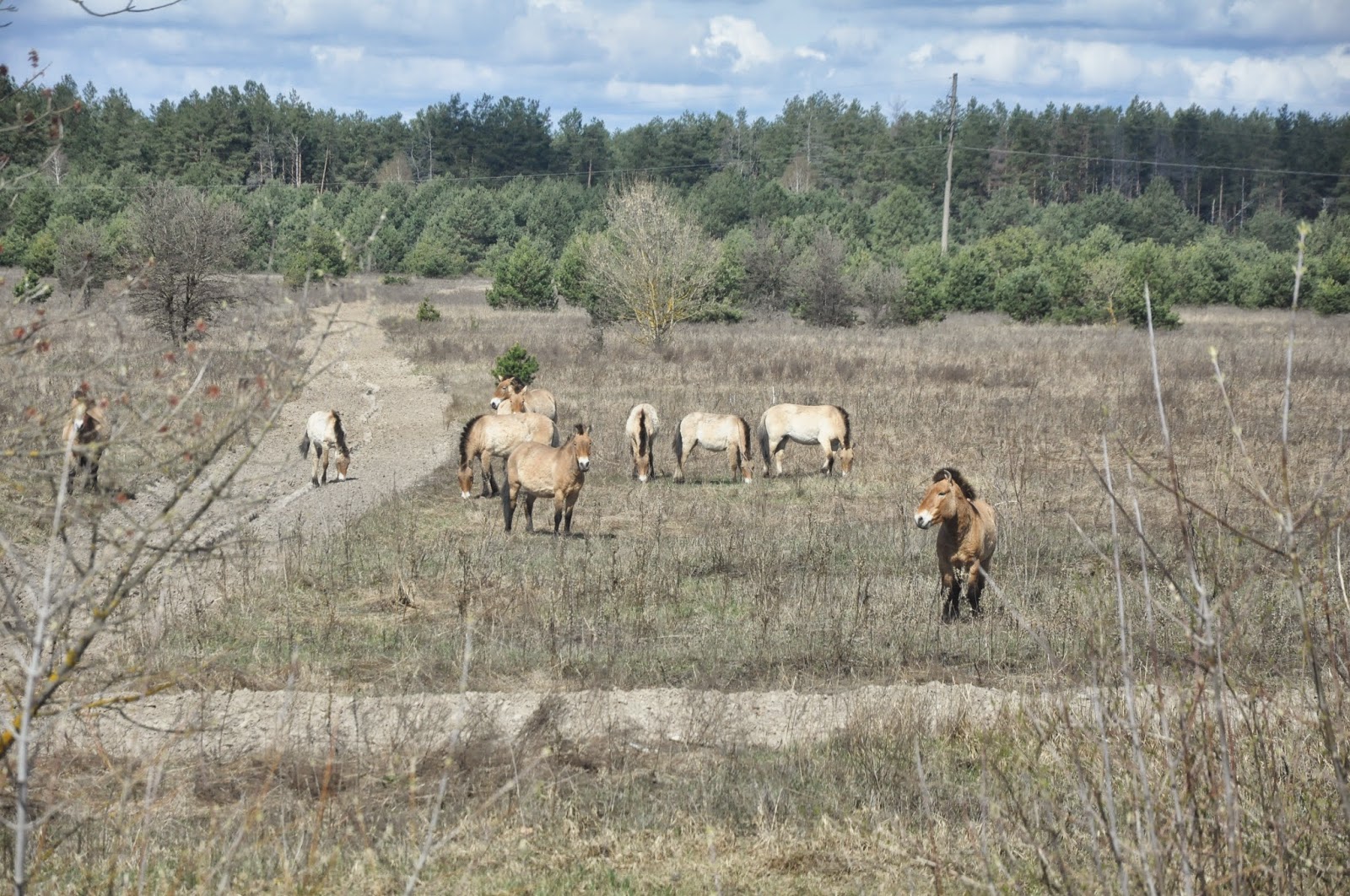 Apparently they love it!  The horses have successfully bred several new generations, and according to Igor, there are currently five or six family groups (8-10 mares and a stallion) as well as little bands of bachelor stallions spread through the Exclusion Zone, including on the Belarusian side.

Life and death; man and nature.  A visit to Chernobyl is a drive through a time capsule and a stroll through a ghost town.  It's also a wildlife safari and reminder of Mother Nature's indomitable spirit.  Some part of my imagination was probably ready for plastic-wrapped spacemen and things glowing eerily with nuclear radiation, but the absolutely very last thing I ever expected to find near Chernobyl was a happy family of Przewalski's horses.  Perhaps there is a happy ending in the works for this ground zero of international disaster and tragedy. 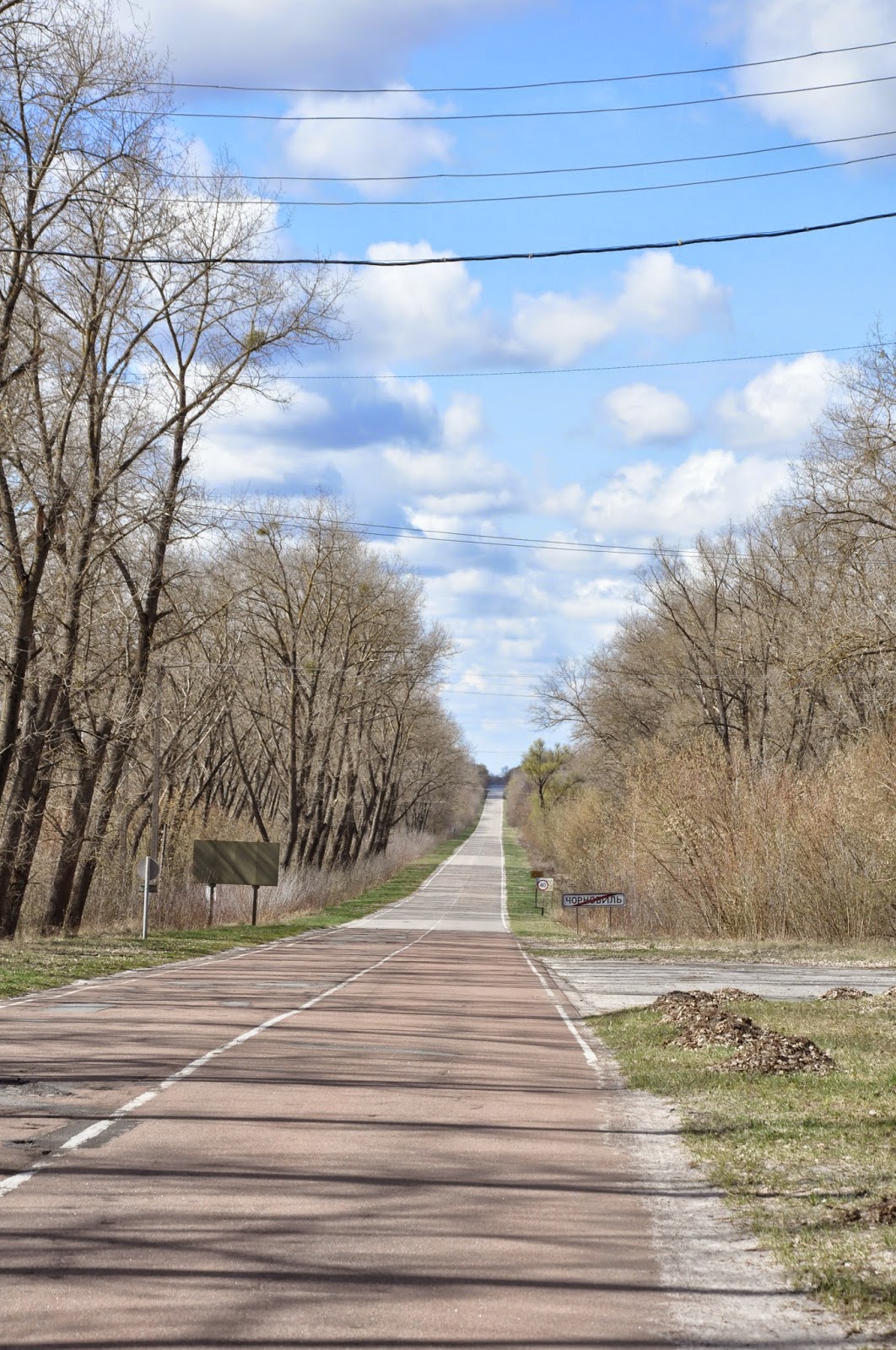 *Why am I switching back and forth with my spelling?  "Chornobyl" [Чорнобиль] is Ukrainian.  "Chernobyl" [Чернобыль] is Russian.  The place is best known by the Russian spelling, but it's located in Ukraine.
Email ThisBlogThis!Share to TwitterShare to FacebookShare to Pinterest
Labels: adventures, Ukraine