Although I didn't know it at the time, this quest started back in 2009 when I ran my first marathon.

Then there was a two year break before marathon two.  Since I still didn't know I was on a quest, I did a third marathon a year later that in no way contributed to the successful completion of the quest.

It was only on the fourth, and coolest, marathon that I realized there was a quest: run a marathon on each of the seven continents.  As my dad pointed out, Antarctica is the most difficult continent to check off.  It only makes sense to carry on and hit the remaining four!

But it appears that I've stalled.

I did run a marathon in 2014, but it was another one on US soil.  I guess I could start a second quest to do a marathon in each of the 50 states?  Three down, 47 to go?  That's not nearly as satisfying as three down, seven to go.  Let's just stick with continents for now.

Anyway, 2014 was the Air Force Marathon in Dayton, Ohio.  It's a pretty popular race, with a field consistently over 15,000 people that do the full distance, and hundreds more that participate in the half, 10k, and 5k that are run on the same day.

The race is hosted at Wright-Patterson Air Force Base, and the fact that much of the course goes around the active flight line on the base is a huge draw for many folks who don't normally have access to military facilities.  Also, the flight line means FLAT terrain.  And since it's the Air Force, they advertise aircraft flyovers as part of the event.

Frankly, I was most excited for the fly over.  It never gets old to see two fighter jets or a huge bomber come swooping in at low altitude and rattle your bones with their roaring engines.  So the 2014 race did not exactly start off on a positive foot when there was no flyby!  Not even a tanker!  Or a UAV!  Nothing!

I spent the first five miles with an eye on the sky waiting to see something in the sky.  Air Force, MAJOR FAIL.

Aside from that massive disappointment, it was a good race.  Most of the hills were in the first bit as we ran around Area B of Wright-Patterson Air Force Base and then headed north towards Fairborn.  We went up and over the interstate, which meant a long, shallow incline, and then passed through Area A of the base and into the town of Fairborn.

The main drag of Fairborn was absolutely my favorite part of the entire marathon.  It's kind of sad that it was around Mile 9, when you're still pretty fresh and don't need the encouragement as much, but at least after Antarctica, I know that I don't need crowd support to survive these events.  Anyway, the route looped up and then back down the main street of Fairborn, and it was PACKED.  They had the high school band out there, and DJs blasting music, and hundreds of people making a gauntlet on the road and cheering and clapping and making a ruckus.  It was awesome!

Then we headed back onto base and out around the flight line, where there were no spectators aside from the volunteers manning the aid stations.  They did a good job, especially the alien-themed aid station set up by the folks from the National Air and Space Intelligence Center, but it did get quiet.  And sunny.  From Mile 12 through about Mile 15, there was no shade.  And it was getting on to mid-morning in September, so it got steamy!

Mile 20 founds us coming off base to go over the interstate again, and then head down a ramp towards Wright State University.  At least the cheering picked up a bit, since folks weren't restricted by access to the base, but the hills picked up also.  It was rolling terrain all the way back to Area B.  My dad, on a bike, found me and trailed along kind of pacing me until we rounded the corner through the main gate onto base and could see the Air Force Museum and the finish line looming at what seemed to be a fairly short distance away.

Fake out!  The finish line was close, but we had to run past it towards the museum and then loop back in a giant horseshoe that, according to my Garmin, put the race at markedly over 26.2 miles.  Half a mile may seem like nothing in the grand scheme of 26, but by that time, your fun meter is usually pegged, and every step past that horrible 0.2 is a complete killer.

Maybe it was the training that I put in over the summer, and maybe it really is just a fast, friendly course, but I ran a PR by about 10 minutes!  It was also my first major long race since I switched to barefoot and changed my stride, and although my calves were quite sore by the end and for the next couple days, overall aches and pains were pretty minimal!  I enjoyed the course, and I thought the logistics of the entire event went very smoothly, especially considering the massive numbers of people that had to get through security and get parked and checked in and all of that.

I also loved that I had friends and family running and supporting at the race!  It's way more fun to collapse at the end when Mom and Dad are there to drink Gatorade and go sit in the shade too.  It was also really cool to high-five my friend as we passed each other on the horseshoe through Fairborn, and then to be there cheering her across the finish line at the end of her first marathon.

My only criticism, aside from the LACK OF FLYBY, was the spacing of the aid stations.  They were two miles apart, which was definitely too far by the second half of the race when the sun was out fully and the heat really picked up.  One of my friends ended up with heat exhaustion because of dehydration, and he was even carrying his own Camelbak to supplement what was available on the course.

So that makes three on US soil.  I'd say I've knocked out the North America requirement for sure ... it's time to move on to the four continents where I haven't run a race yet!
----------------------------
2015 Update: I didn't run the full again, but I was there for the start of it and then I ran the half marathon.  I think the organizers must have gotten wind of how disappointing the lack of flyover was in 2014 ... so they made up for it this year!  Three in one morning!  The highlight was the U-2 Dragonlady, which flew over before the marathon gun.  The U-2 was also the sponsor aircraft of the 2015 race.  But then a bunch of guys jumped out of a C-130 and parachuted down with giant American flags strapped to them, which was pretty cool.  And then the Wright Flyer flew over!  It's a model of the aircraft with which the Wright Brothers successfully cracked the code on getting something heavier than the air to stay airborne.  Welcome, aviation!  So, three for one.  Much more what I expect from the Air Force! 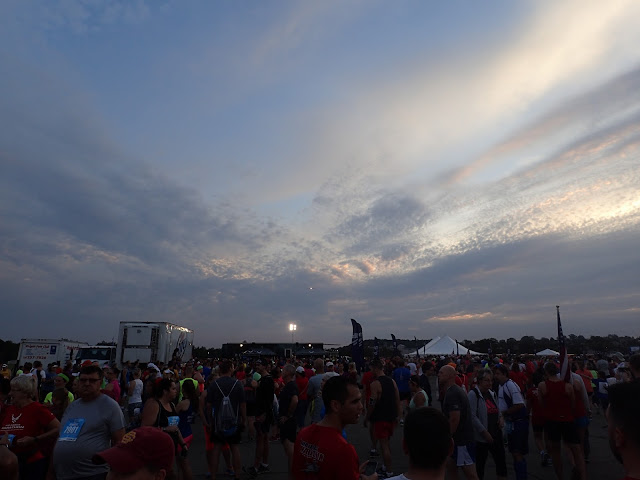 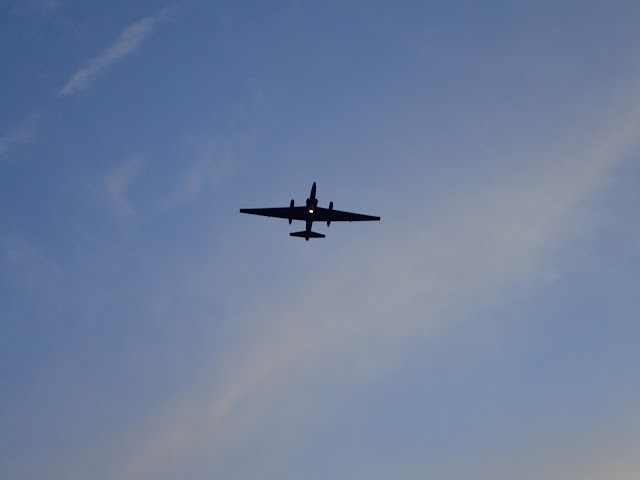