My 2015 marathon was atypical.  Although I guess that doesn't mean much, coming from me.  But this one was different, even by my standards, because it wasn't a run.  It was a hike.  Or, more appropriately, it was a march.

The Bataan Memorial Death March is held annually in memory of the forced march of over 60,000 American and Filipino soldiers at the hands of the Japanese Army after the three-month Battle of Bataan in the Philippines in 1942.  Over 10,000 of those prisoners of war (POW) died during the brutal 60 mile journey.  A significant number of the American POWs were from the New Mexico National Guard, which is why the New Mexico State University Army Reserve Officer Training Corps (ROTC) began sponsoring the memorial march in the late 1980s.  The New Mexico National Guard and White Sands Missile Range became sponsors of the event in 1992, which is when the march relocated to the missile range.

I don't remember the first time I heard of the Bataan Memorial Death March, but it's been in the back of my mind for years.  I did not (and honestly still don't) know a great deal about the history that the march is memorializing.  I was hooked because of the location.  White Sands Missile Range was, in my mind, one of those mysterious, secretive, forbidden government sites that I naturally was curious to see.  What a great opportunity!

Silly me.  Anybody can drive through White Sands Missile Range -- well, at least through the southeast corner of it.  The highway from Las Cruces over the San Andres mountains to Alamogordo goes straight across that section of the missile range.  It's beautiful country! 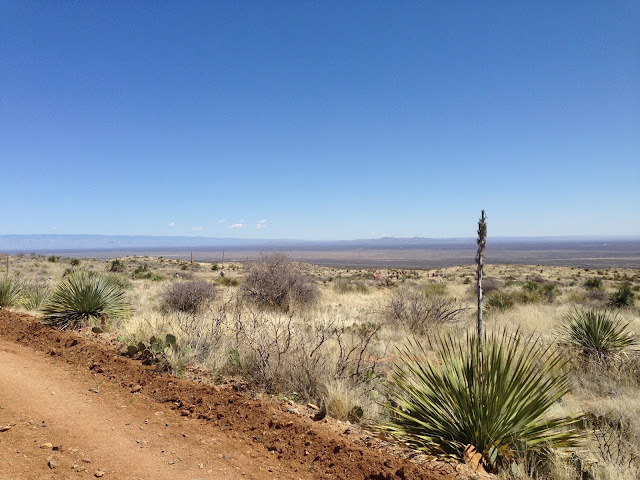 Although I can evidently travel through the range whenever I want, participating in the Bataan Memorial Death March gave me 26.2 miles to become much more intimately familiar with the high desert terrain of White Sands Missile Range.  (Yes, the hike is limited to 26.2 miles, even though the actual event was much longer.)

Participants in the march can enter under several different categories.  Many military members wear their combat uniforms.  Non-military wear whatever they want.  And both military and non-military can race either in the "light" or "heavy" divisions.  "Heavy" division means participants carry a 35 pound ruck for the duration of the march.

The march started out very early in the morning on the Army garrison at White Sands.  In true desert fashion, it was quite chilly and required several layers of long-sleeves to be comfortable.  After an emotional recognition of some of the remaining survivors of the Death March, a Blackhawk helicopter buzzed the crowds of marchers, and waves and waves of U.S. service members saluted the giant American flag floating over the starting line.  After all that exciting and inspiring pomp and circumstance, the actual start was a shade anti-climatic because there's no sudden crush of movement forward and no shifting into high gear.  You're beginning an eight-hour hike through rocks and sand up and down a mountain; you stride forward in a purposeful walk, but a walk nonetheless. 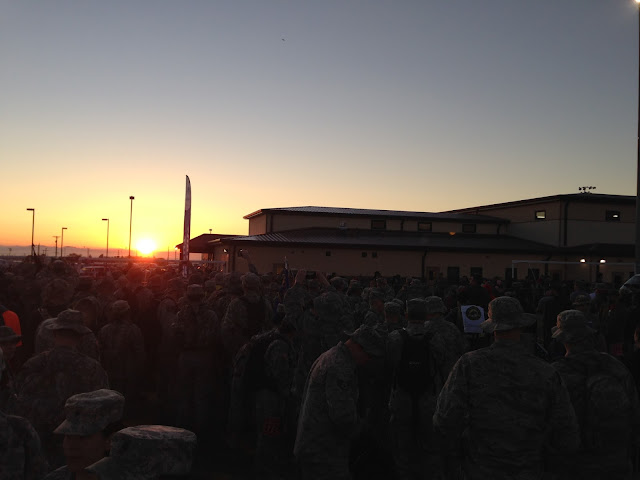 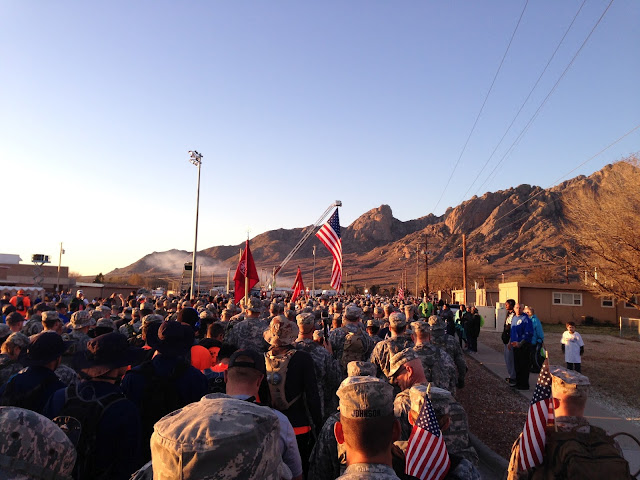 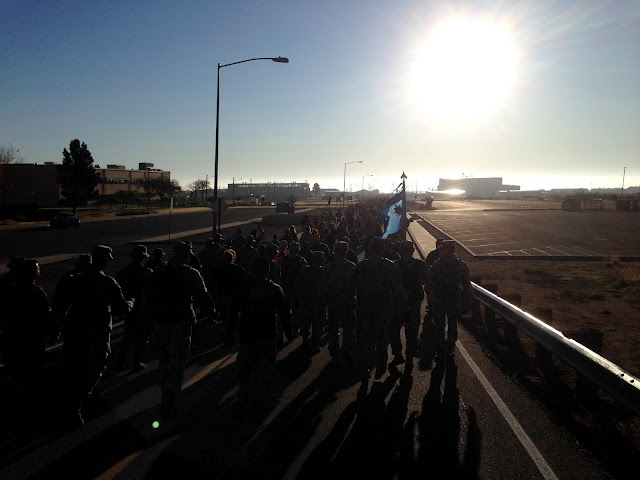 The first eight miles meandered through the relatively flat, gravelly sagebrush heading north of the Army garrison towards Highway 70.  Folks chatted with each other as we trudged along, and I ended up paired with a girl doing the "heavy" category.  We matched up around mile three and stayed together for the next 17 miles!  She pushed me to sustain a more strenuous pace, and I would have been at least an hour slower without her company. 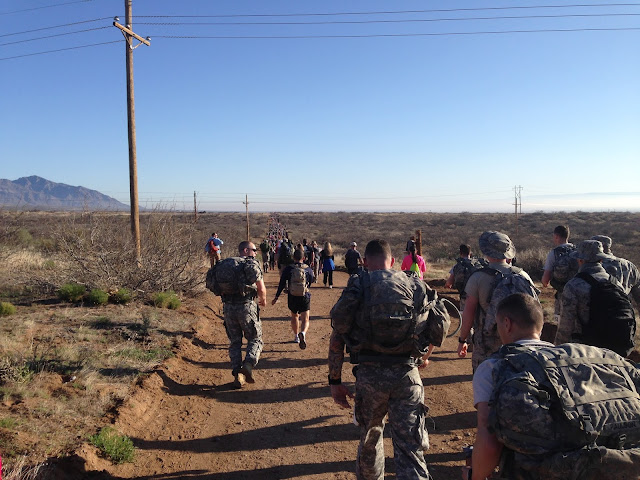 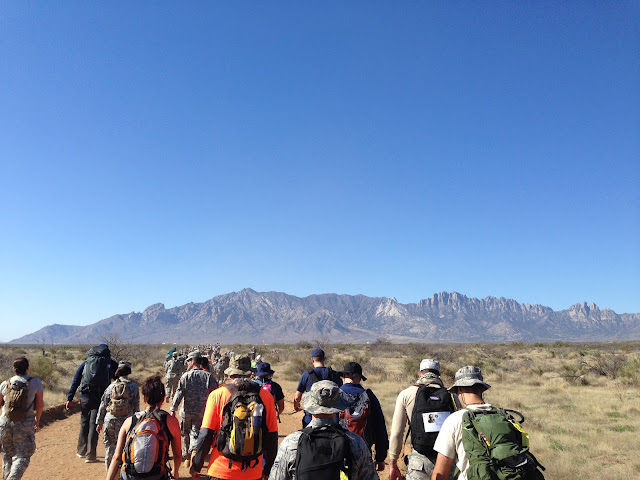 At Mile 8, the main course turned north under the highway and towards the mountain.  Those who elected to do the 14.7 mile short option looped directly back towards the garrison, but the rest of us had a  mountain to climb first. 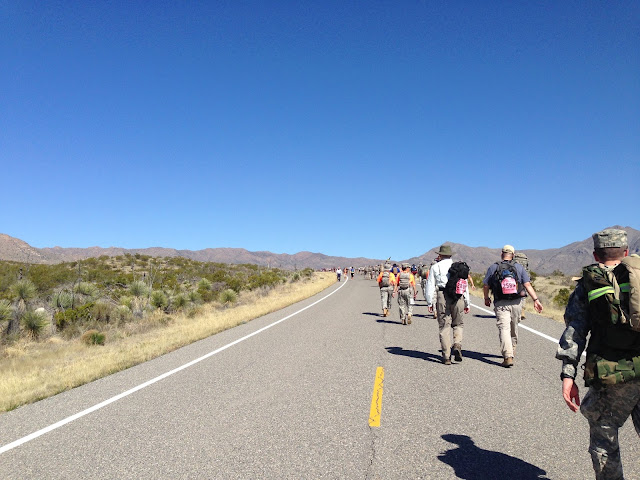 For this part of the march, we were on paved road that went straight up for more than a mile, gaining almost 200 feet in elevation.  Thankfully there was a water station at the top, and we paused for a well-earned break before continuing on to what was my favorite part of the route. 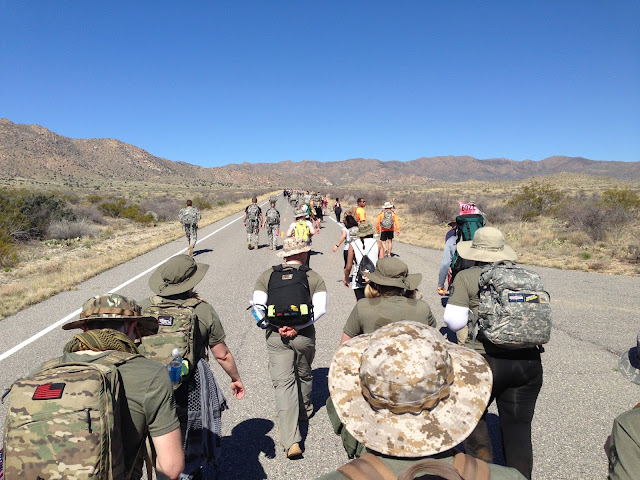 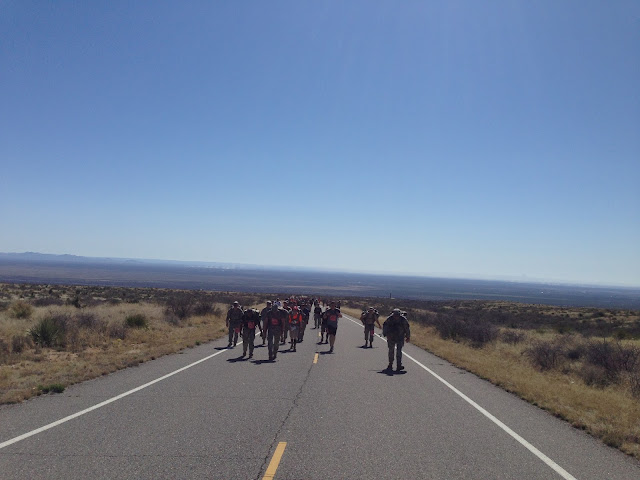 Now that we had climbed nearly to the top of Mineral Hill, we maneuvered in a circle around the peak. The path became sand and dirt, which was a challenge after the hard pavement, but suddenly we seemed to be truly out in the wilderness.  As we passed behind the peak, the buildings of the Army garrison and other maintenance structures near the end of the paved road vanished.  There was nothing but dust, sage, cholla, and endless blue sky. 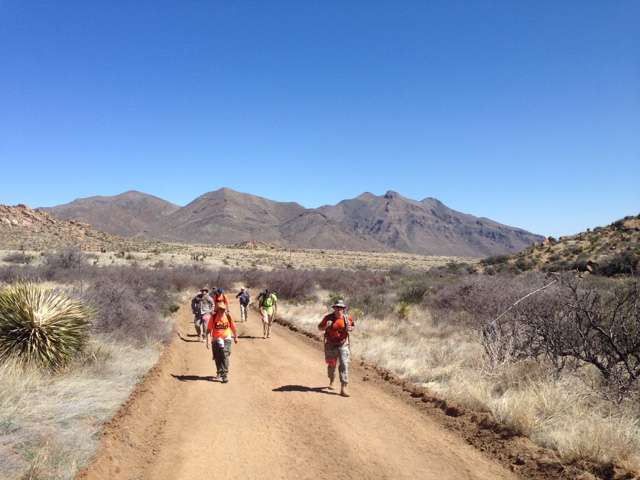 An occasional abandoned wooden ranch building crouched dispiritedly some distance of the trail, distracting my imagination with rumination on the challenges of carving a life out of this harshly beautiful land.  It was only fitting that as the path continued round the mountain and the highway slowly came back into view, several Rangers mounted horseback paused just off the path observing and cheering for the marchers.  It was a snapshot of a wilder time in Western history. 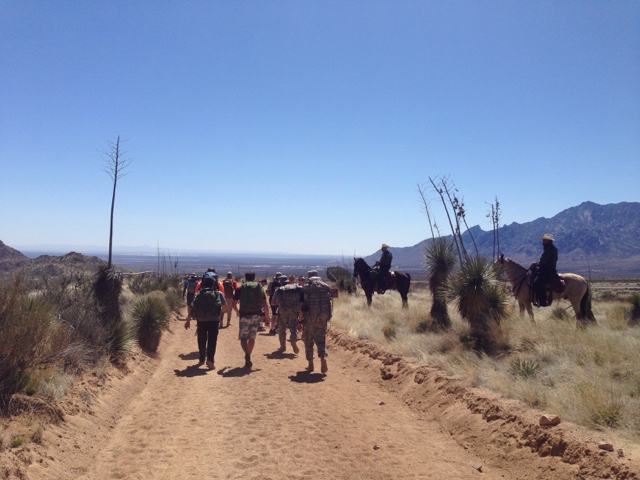 The mountain loop ended just after Mile 18, and my feet were extremely unhappy.  Totally my own fault; I didn't exactly do any practice treks with my boots before the march.  So I stopped to get some blister assistance, and lost my hiking partner in the process.  She thought I might catch her, and that goal certainly had me moving quite quickly through the last miles, but I never saw her again. 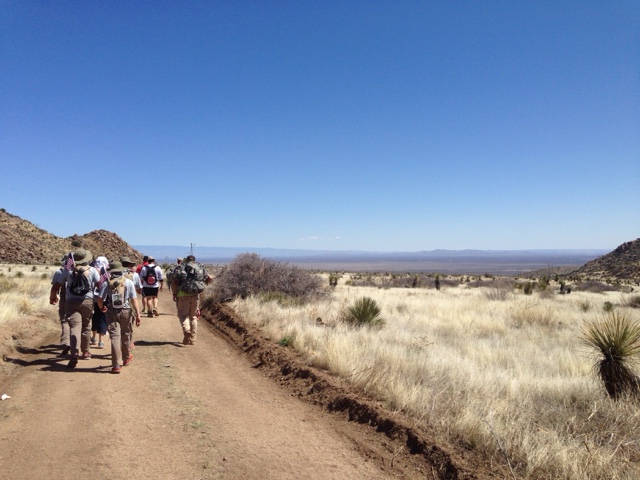 It was easier to trot down that mile-long hill than walk, and then it was back under the highway on the road until the route dipped off pavement again through more dirt and sand back towards the garrison.  As I got closer to the garrison, I realized that my Garmin was running out of battery power. 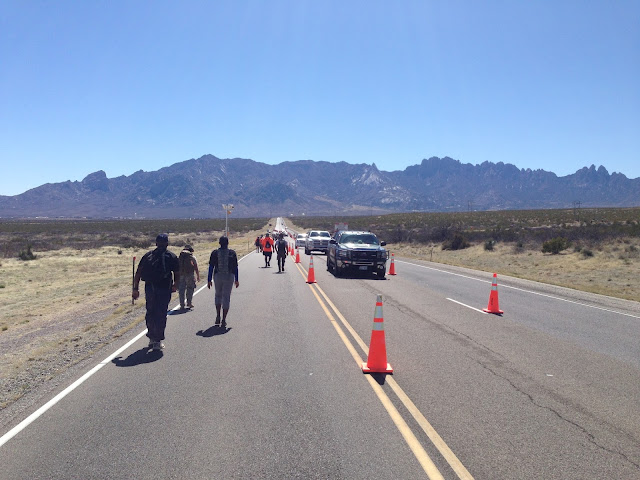 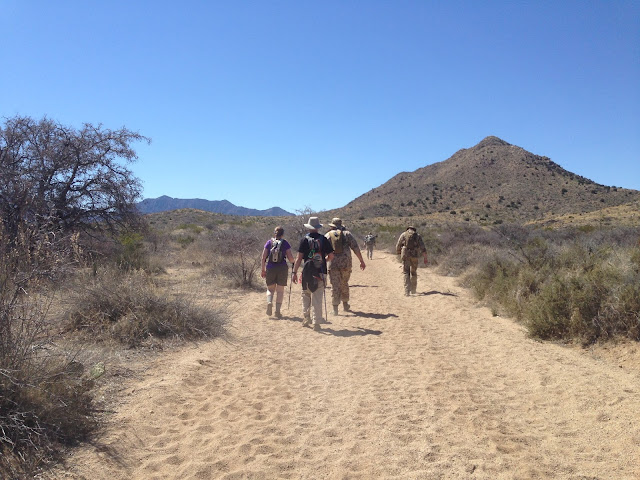 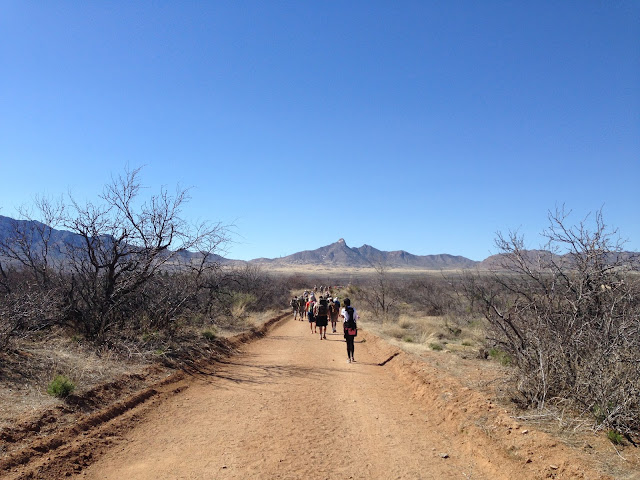 That dang watch was my final push to the finish.  I really wanted to see my entire GPS track after the race, and I was determined to cross the finish line before the watch died.  Despite my incredible blisters, and the fact that I'd been on my feet for about 8 hours at this point, I picked up the pace as the course wound along the western perimeter fence of the garrison and eventually rounded the last corner towards the tents and music and crowds at the finish. 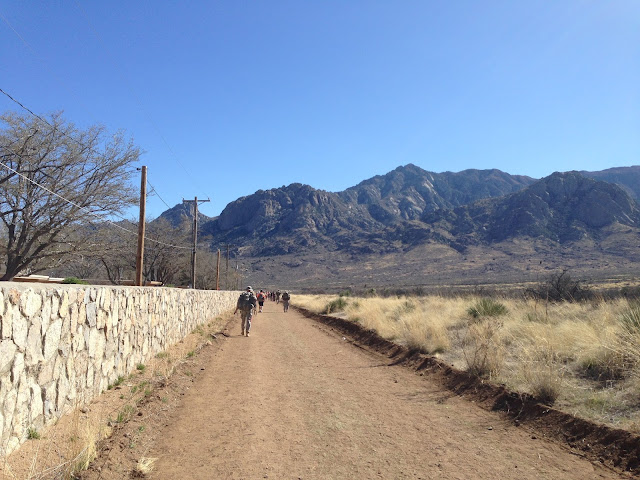 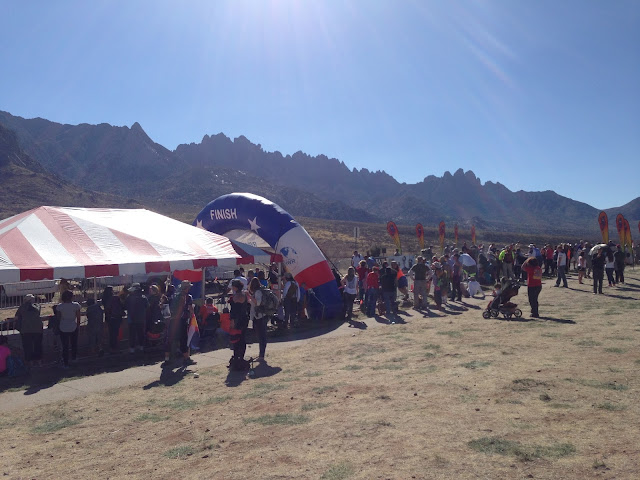 At the Bataan Memorial Death March, I learned that I can hike a marathon in almost exactly twice the amount of time it takes me to run one.  I relearned that there is a reason we break in our footwear before using it for a serious event, and I was continuously reminded of this for four days after the march until my blisters went down and I could walk like a normal person again.  Although I evidently didn't need the excuse, I got to see my mysterious White Sands Missile Range and experience New Mexico in all its desert glory.  And I got to spend a day being thankful that I could choose to undertake this challenging but enjoyable journey instead of enduring the brutal circumstances forced upon those soldiers during World War II.