November 2013 was a huge month for me with the epic adventure to Union Glacier for the Antarctic Ice Marathon.  But one of the bonuses of that trip was that it also provided my first introduction to travels in South America!  It was a brief introduction, thanks to our extended stay in the Great White South (which I still do not regret at all), but I made the most of my limited time!  I'll confess I was a shade nervous to be traveling alone in Chile simply because it was my first solo trip to a wholly unfamiliar place, but I had nothing to worry about. 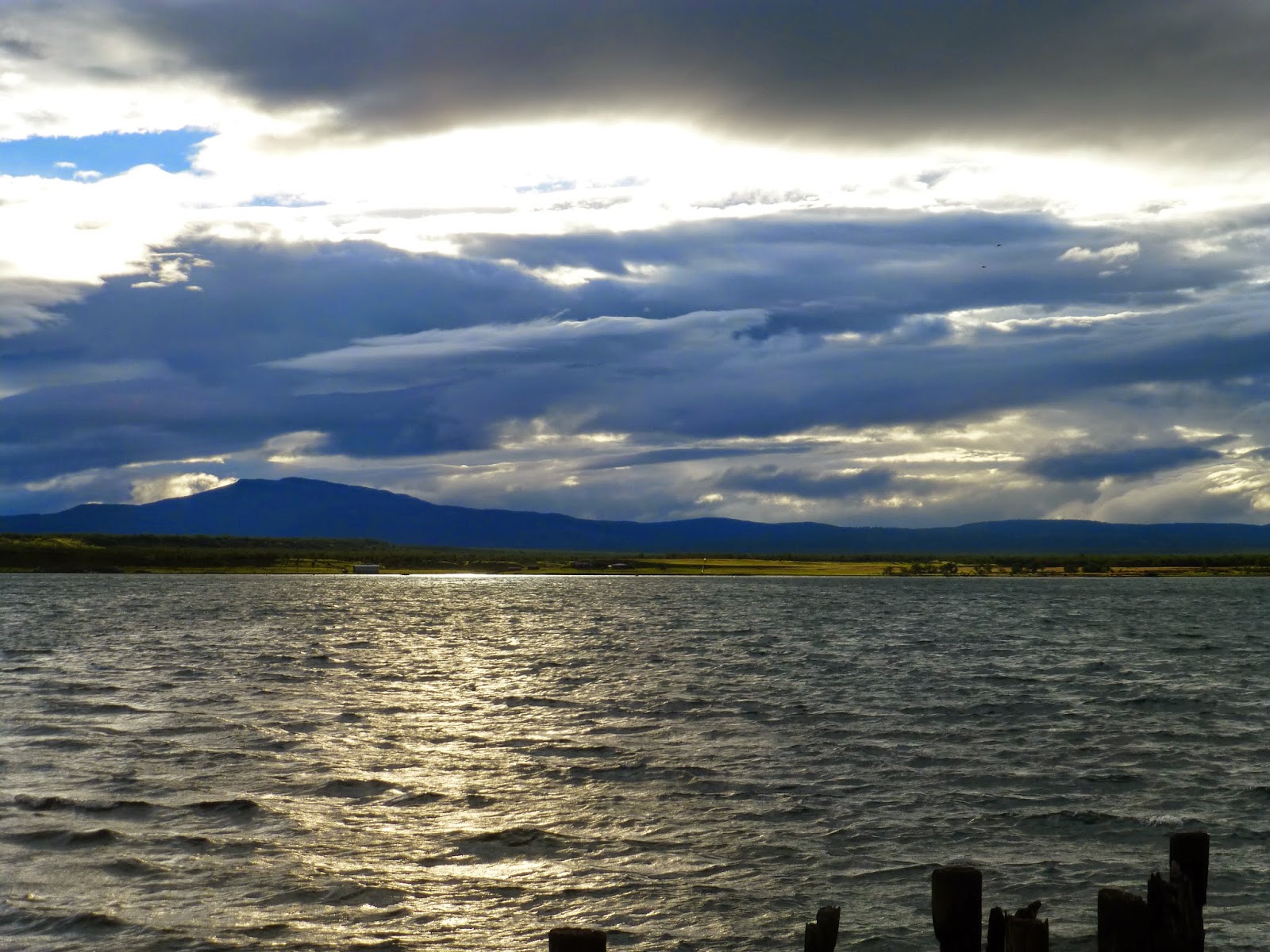 Technically my introduction started with an extended layover in the terminal at Santiago International Airport while waiting for my flight to Punta Arenas, which was our mustering point for the marathon.  But I'll skip those hours, which just involved me ordering mysterious snacks from the little shops (apparently I no longer speak Spanish!  Sad discovery!) and aimlessly walking around to stretch my legs.  Once I escaped from the airport, I spent time in two lovely cities in Chile's southernmost administrative region, Region XII Magallanes and Antarctica Chilena.

Punta Arenas is the regional capital, home to a port and a variety of military units and a university, and a major launch point for expeditions to Antarctica.  The city nestles right up to the coast, and there's a lovely boardwalk that's been developed all the way to the edge of town which is quite convenient for running if you don't mind the wind.  I was immediately struck by the architecture of the city, which seemed to me to be a strange mixture of European precision and modernity and shoddy aluminum cheapness.  I couldn't figure out exactly how to pinpoint what was so identifiable, but it lends a very specific character to the region.  I enjoyed walking around the city, which is conveniently laid out on a grid, and just admiring the various styles of houses and gardens.  Plus it was SPRING and there were beautiful blue skies and plants coming to life and the complete opposite of the weather back home! 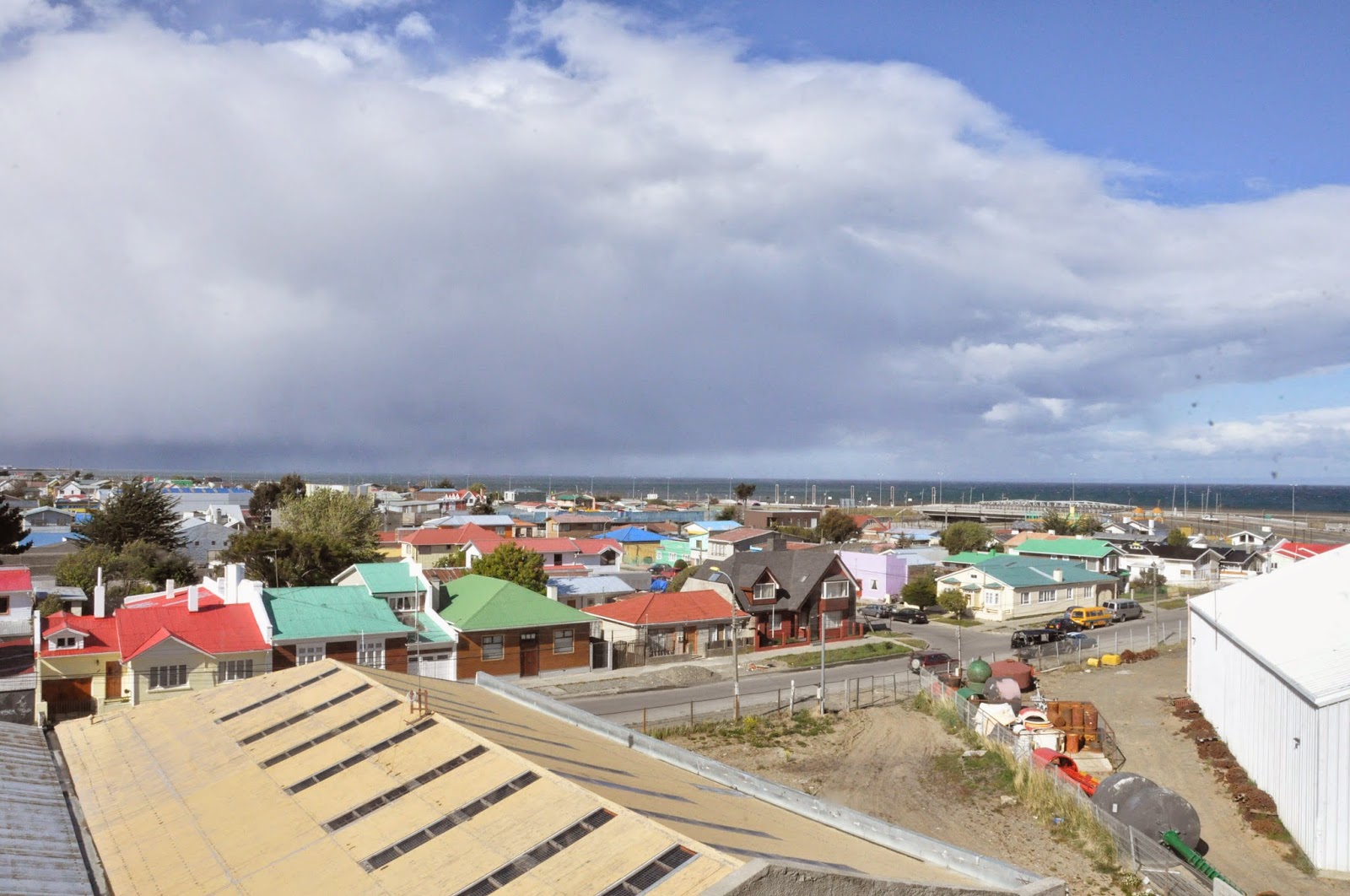 There are a lot of nice shops downtown stocked by plenty of well-known gear companies like North Face and Marmot, which was convenient for last minute acquisitions of mittens and wool socks.  We immediately settled upon Okusa as our favorite restaurant in Punta because they served great food, were not traumatized by large groups of us showing up (despite our penchant for mishaps, like one literal run-in with the waiter that dumped a tray of drinks on our heads), and they had amazing amazing strawberry juice.  Our last night together as a group after returning from Antarctica before everyone dispersed back to their normal lives was spent largely in the bar above the casino in Dreams Hotel, which offers amazing views across the harbor and the city.  (In fact, check out the bathrooms if you go there, because the stalls have a wall of glass (hopefully one-way!) so you can enjoy the view while taking care of business.)  Pizza and pisco sours, that was an American Thanksgiving for the books! 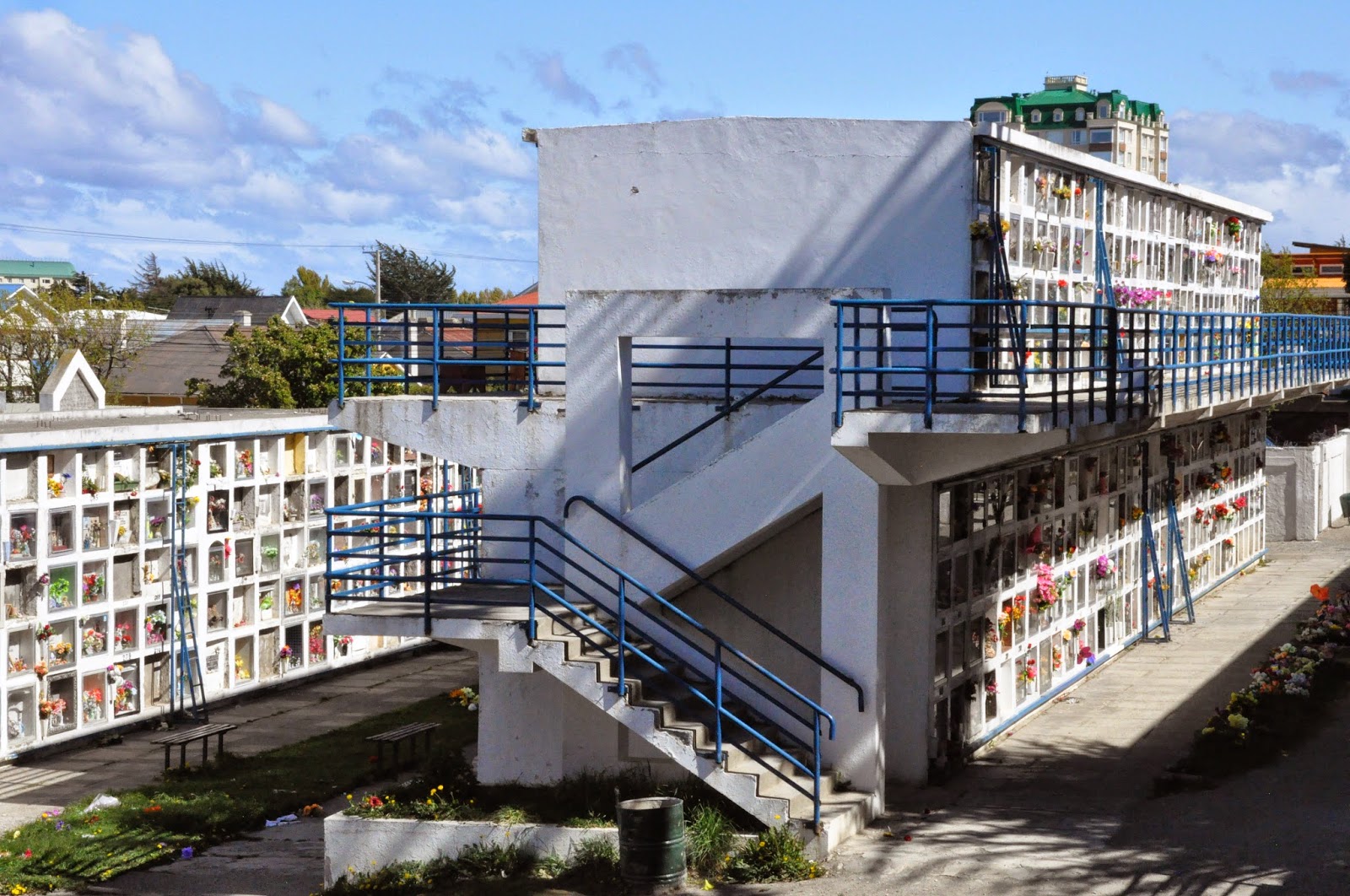 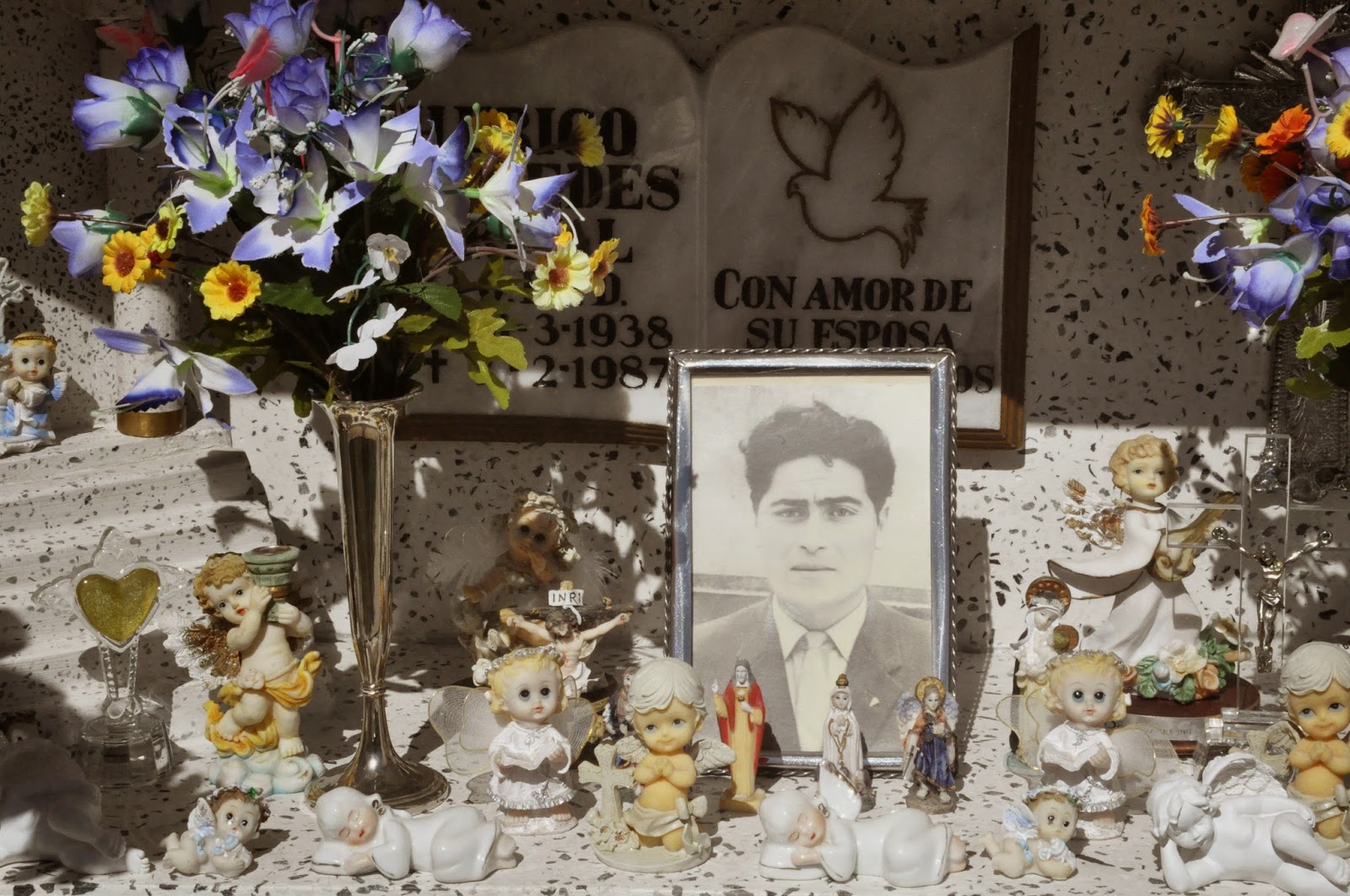 An interesting feature of Punta is the municipal cemetery, and we spent some time walking through it the day before we flew to Antarctica.  Much of the cemetery is magnificently manicured with huge marble mausoleums and intricate sculptures.  Around the edges of the cemetery, I was surprised to encounter structures that frankly reminded me of Soviet-style apartment buildings, except condensed in size.  These are also burial sites, evidently for the folks who can't afford the massive, elaborate tombs in the other parts of the cemetery.
Less fancy, perhaps, but clearly just as well attended by loved ones. 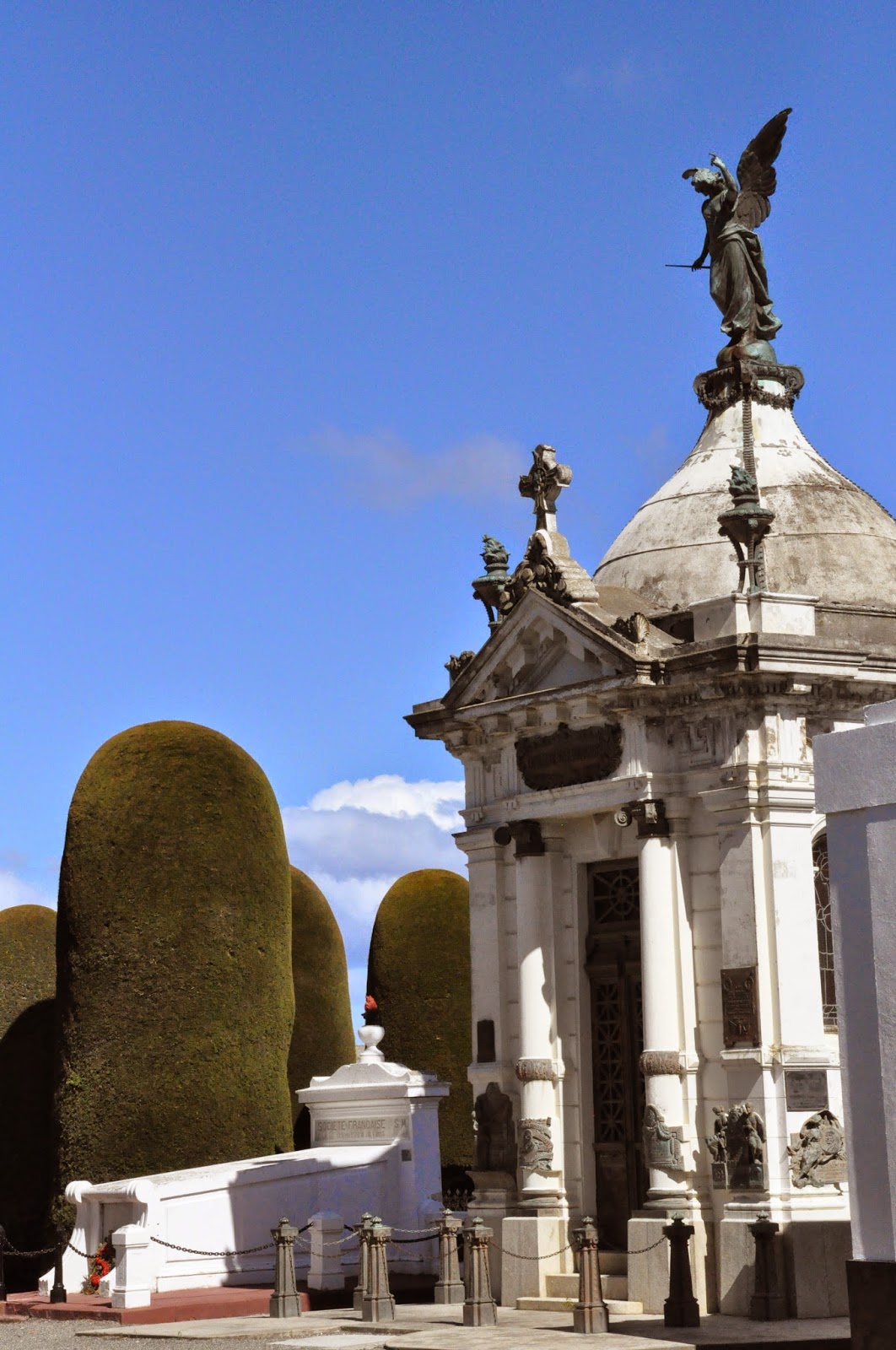 Most of us runners posted up in a nice hotel, Diego de Almagro, right on the coastal road and on the edge of downtown, prior to the race.  My last night in Punta Arenas before I flew home was in a hostel quite a bit removed from town (aka cheaper), but it was nice and clean and I had a whole dorm room to myself and the owners were super helpful and sweet.  I felt like I knew the city pretty well by that point, so I didn't mind being removed from the main hub.

Overall, it's a bustling little city in a lovely location, but from a tourist perspective, there isn't a ton there or in the immediate area.  You can take day trips to some penguin colonies and check out the museums in town, but otherwise it seems to be mostly a springboard to Antarctica.

After the Antarctic portion of my trip came to an end, I boarded a bus in Punta Arenas and headed north to Puerto Natales, the gateway to Torres del Paine National Park.  Talk about an awesome bus ride!!  Patagonia is gorgeous.  Every inch of it.  Even though the bus was really nice and had a movie playing and was super comfortable, I had my nose glued to the window for the entire drive.  Who wants to watch Keanu Reeves in an strange ninja movie when you have this scenery instead?? 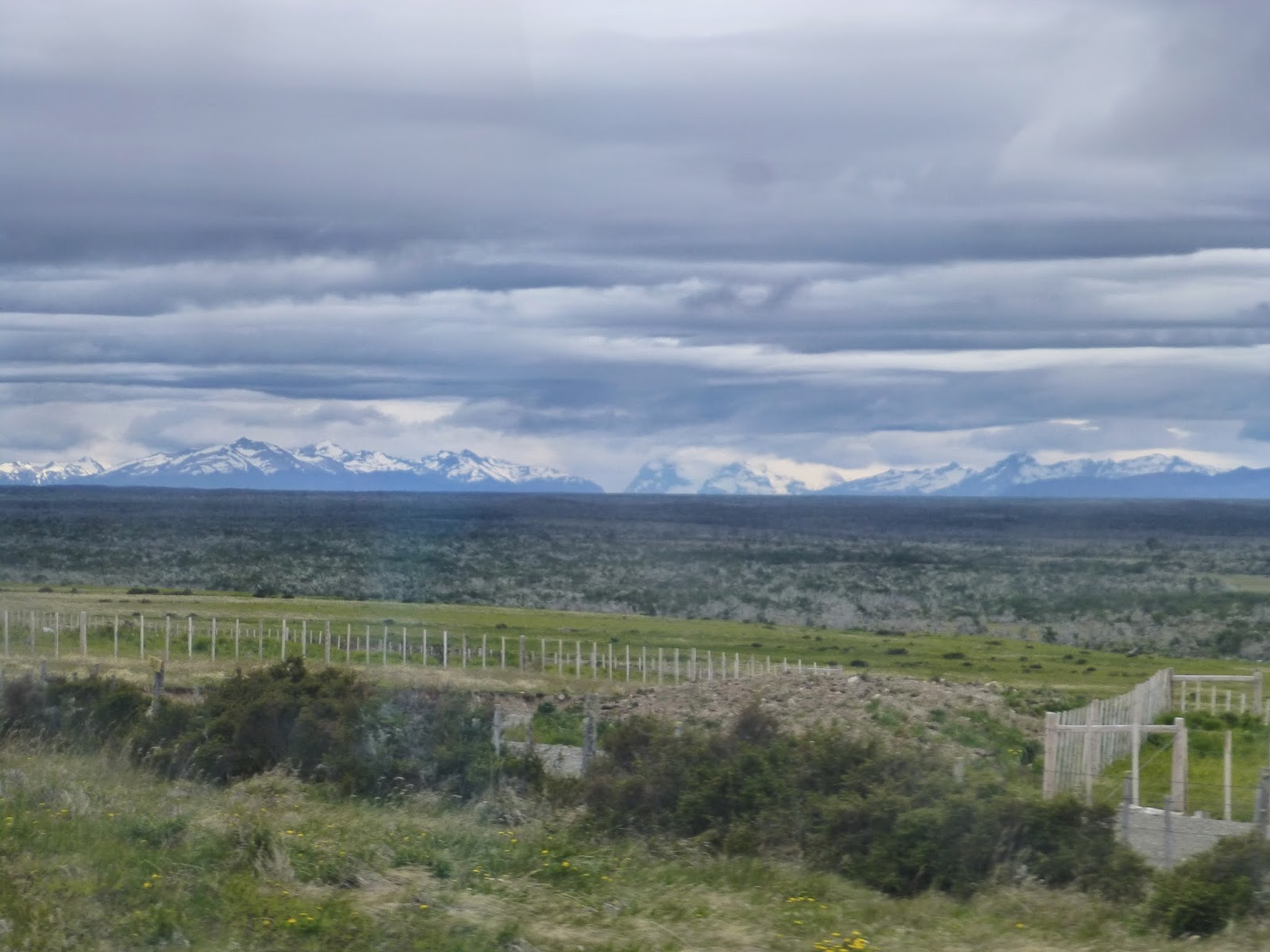 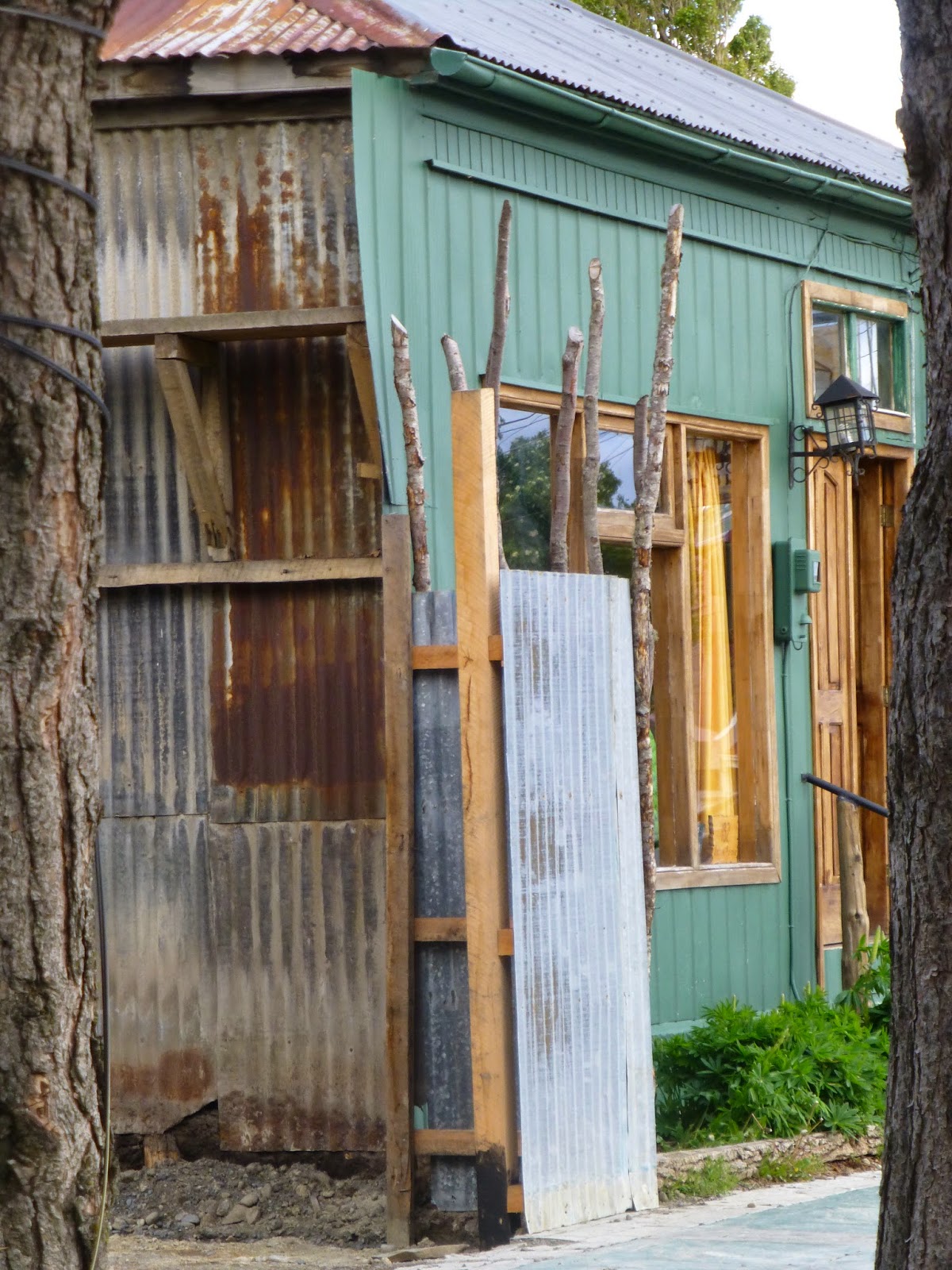 Like Punta, Puerto Natales is right on the water but the surrounding scenery is even more majestic because there are mountains.  And again with the architecture!  I saw so many buildings that looked really nice from the front, with decorative painting and bright colors, but another angle gave me a glimpse at the sides not facing the street, which exhibited the bare-bones construction.  So very strange.  Like Punta, Puerto is well-stocked with stores offering outdoor gear because basically everyone who comes through is on their way to Torres del Paine to hike.  And there are hostels out the wazoo.  This is a town that has found its niche and makes the most of it!

My first night was at Backpackers Kaweskar, which was fairly new and perfectly nice, but it didn't have the friendliest vibe.  I went to Erratic Rock, which was just around the corner, for the pre-hike gear talk and promptly made sure to secure myself a room there when I returned from the park.  They are an awesome resource for getting to and through Torres del Paine!  If you're new to distance hiking, the talk covers literally everything you need to know to stay safe and have fun during your trek.  They also offer gear rentals and can tell you where to go in town to get everything else you need.  I also love how all the hostels offer free storage so that you can leave extra bags behind while hiking in the park.  It would have been killer to tote my Antarctica gear with me the whole time! 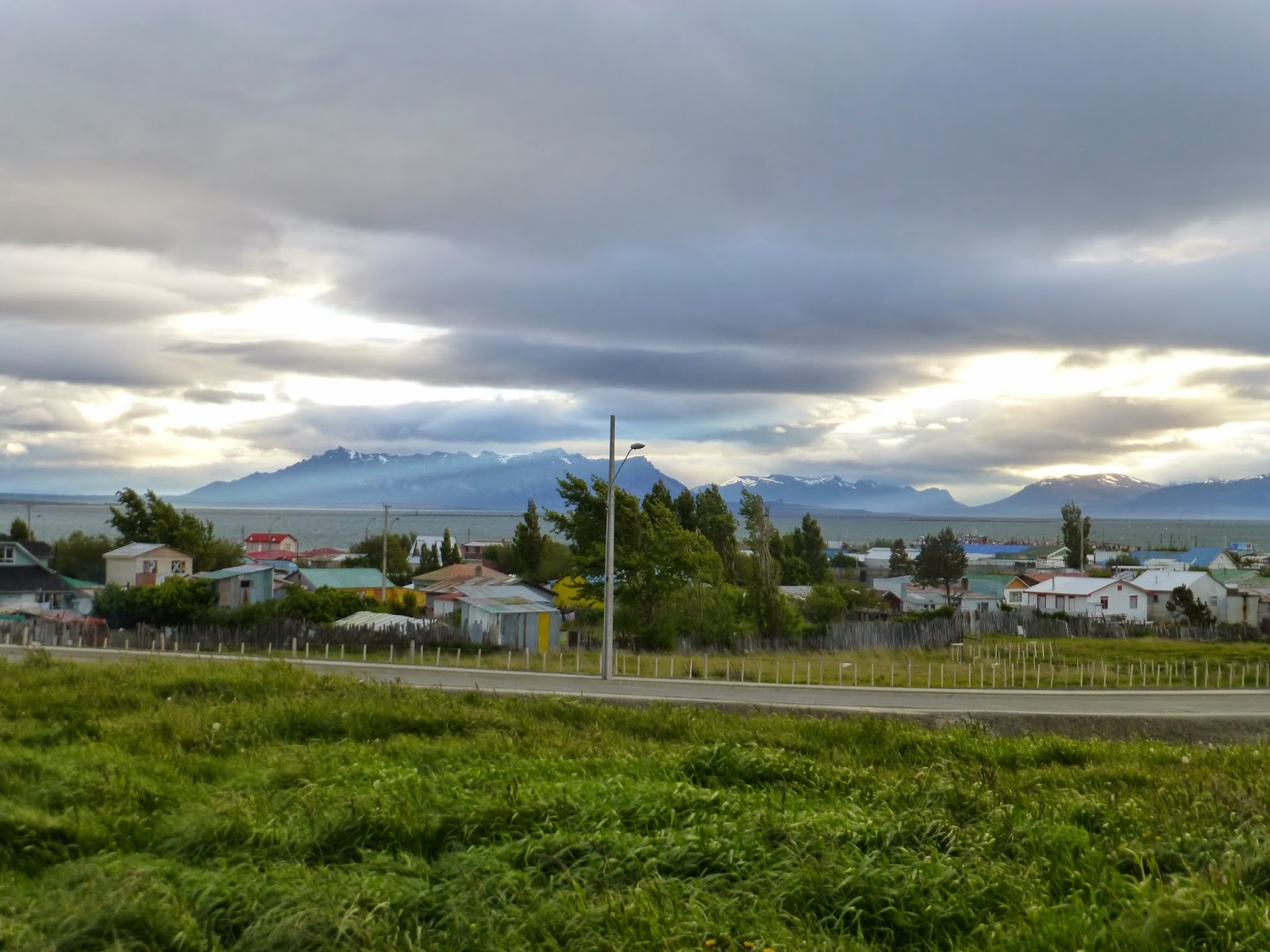 Natales, like Punta, has lots of delicious restaurants tucked everywhere throughout the city.  On my last night there, I ended up at a pizza place where I ordered a 'mata vampiros,' which is quite possibly the best name ever for a pizza.  Mmmm garlic.  Because most people are in town on their way to or from the park, there's always a common conversation topic, which makes it easy to make friends.  I was traveling alone, but I had fun company for every meal out.  When I mentioned how I had ended up in Natales, the Aussie couple sitting next to me told me how they had flown to Chile on a plane with three people who were going to run a race in Antarctica.  Gee, I wonder which race that could be?  One of those three people was my clam-mate!  The world seriously shrinks when you go to the Great White South. 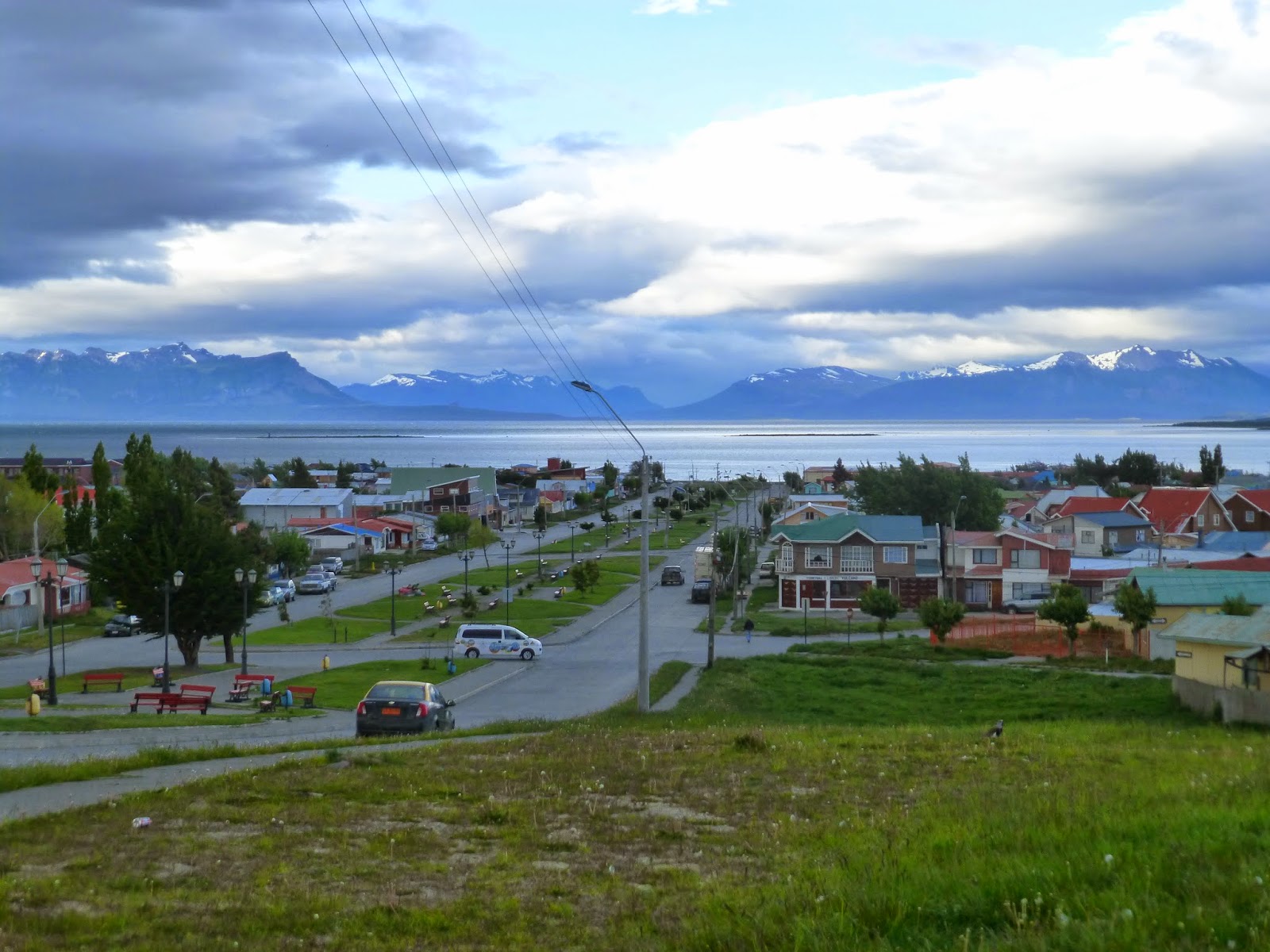 Logistics: The ride between Natales and Punta is three hours, give or take.  There are three bus companies each with different but very regular schedules, so it's very easy to find a bus that matches your needs.  The bus stops are in different locations around Punta (or from the airport), and Natales has just one bus terminal which is about 15 minutes walking from downtown.  On my way to Natales, I took Buses Pacheco.  You can save a few bucks by purchasing round trip tickets, but even a one-way is only around $10 US.  Since I managed to commit a rookie travel mistake and miss my return ride, I had to buy a second one-way ticket and went back to Punta on Buses Fernandez.  Despite my best efforts to mess things up, the whole journey was much easier to manage than I had expected!
Email ThisBlogThis!Share to TwitterShare to FacebookShare to Pinterest
Labels: Chile