I hadn't even set foot on the trail, and already the odds were stacked against me.

About ten days prior to my arrival in the remote, beautiful Patagonian wilderness of Torres del Paine National Park, I ran a marathon.  My knee was pretty upset about this marathon, and even though its complaining had subsided, I expected it to flare up as soon as I started to hike.

Also, because of a string of uncontrollable circumstances, I arrived at the trailhead around one o'clock in the afternoon.  The only map in my possession was the one provided at the entrance to the park, which naturally provided excruciating detail of the walking paths (not).  I wasn't entirely sure how long the hike was supposed to take, since ten kilometers means a lot of different things when you're in the mountains.  And I definitely needed to be back to civilization before dark.

Also, it wasn't exactly a gorgeous sunny clear spring day.  It was crazy windy.  There were ominous grey clouds sitting back on the mountains.  The odds were good that even IF I made it to the end, there would be no view whatsoever. 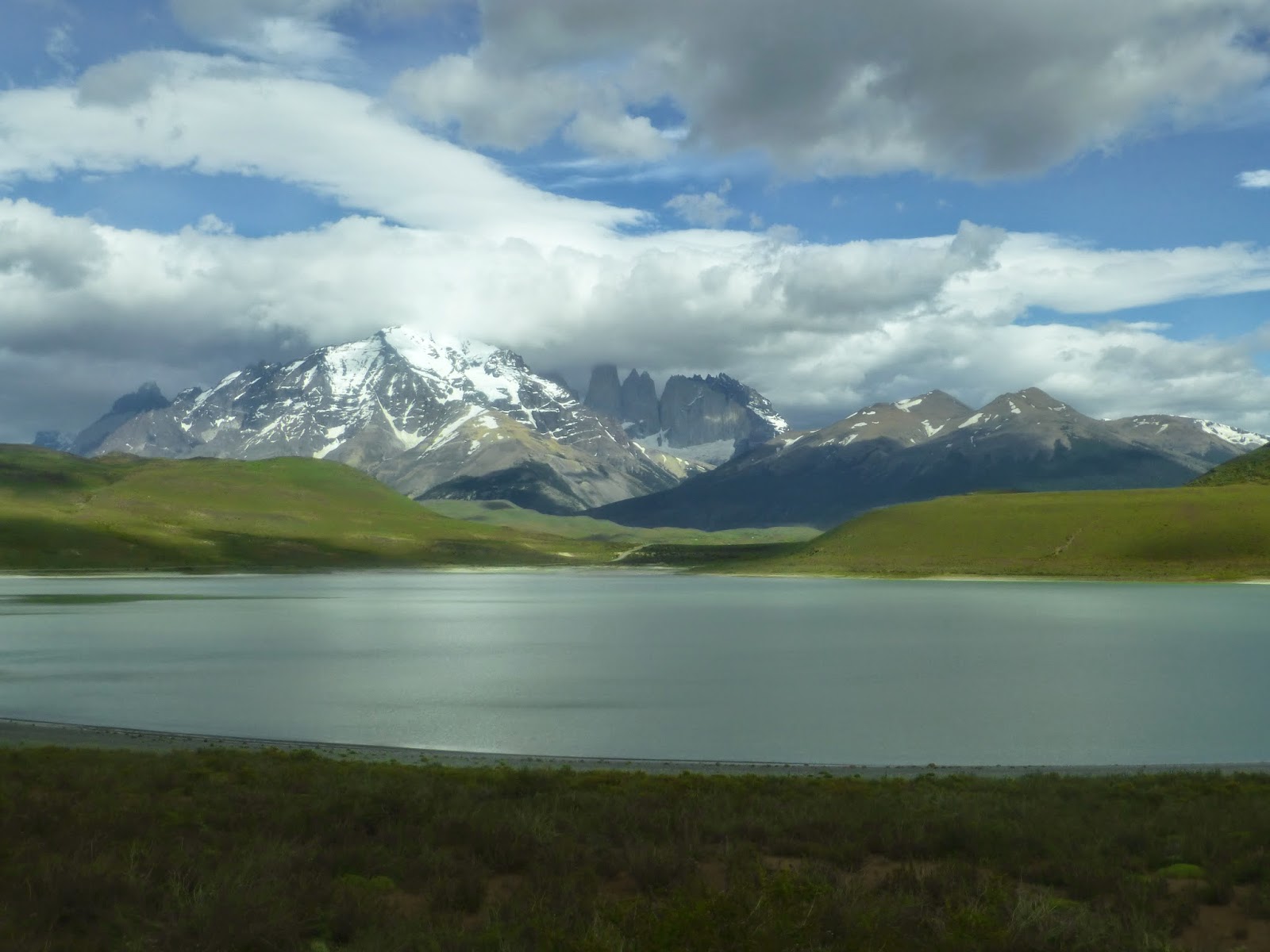 But, this was my only opportunity.  Foul weather had forced a change to my plans to take a liesurely week and hike the path known as the W.  Now I had only 24 hours in Torres del Paine and not a moment more.  And I absolutely could not miss my bus in the morning, which meant it was now or never to find the famous stone towers for which the park is named.  Weather be damned.  Lack of directions be damned.  Knee be damned.  At least I'd remembered a water bottle! 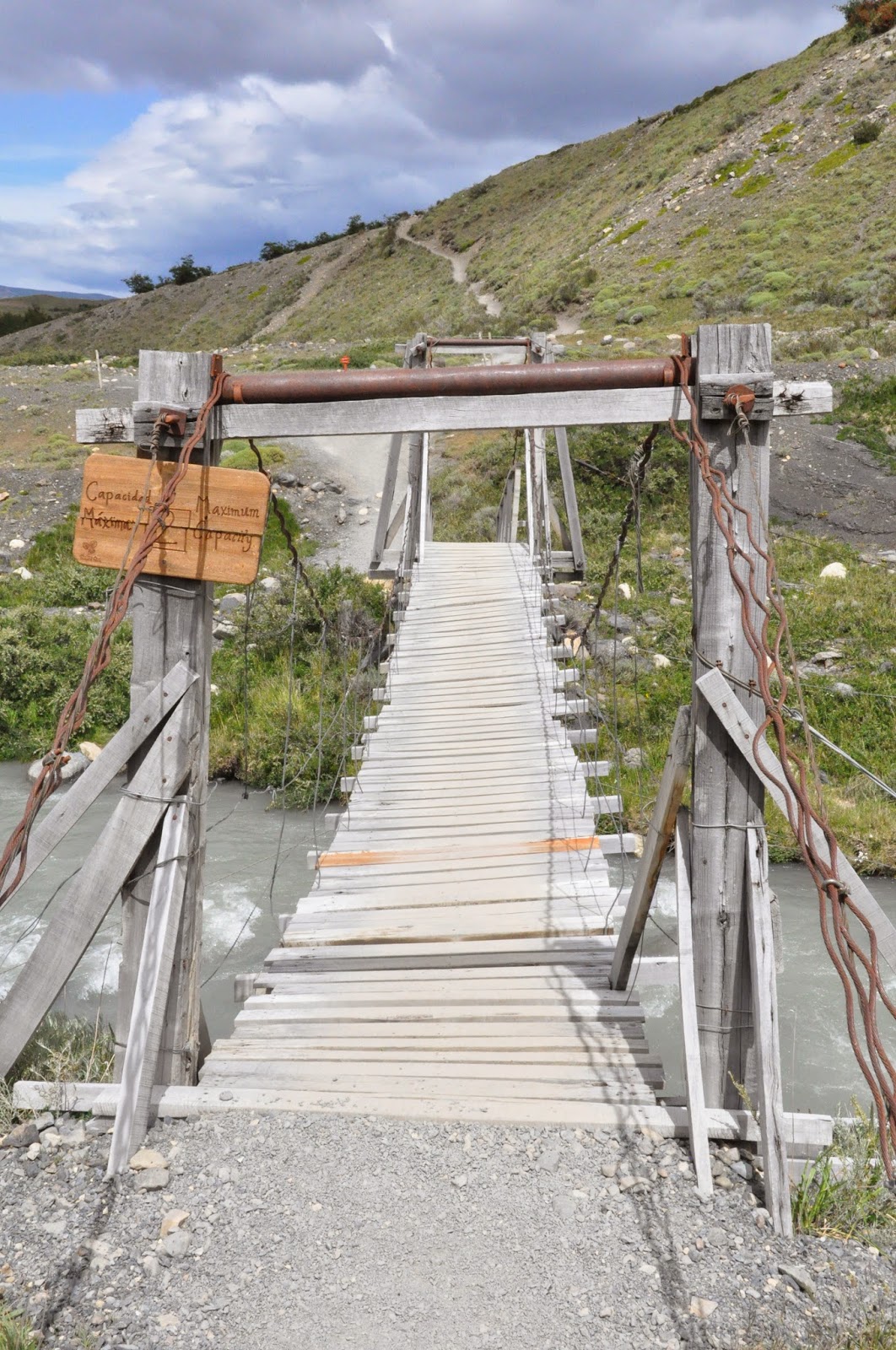 The trail started behind Hosteria Las Torres with a narrow bridge over a bustling stream.  It zig zagged up to an intersection at a bluff, where the path to Las Torres continued towards the Ascencio Valley and the trail to Los Cuernos headed southerly along the shores of Lago Nordenskjold. 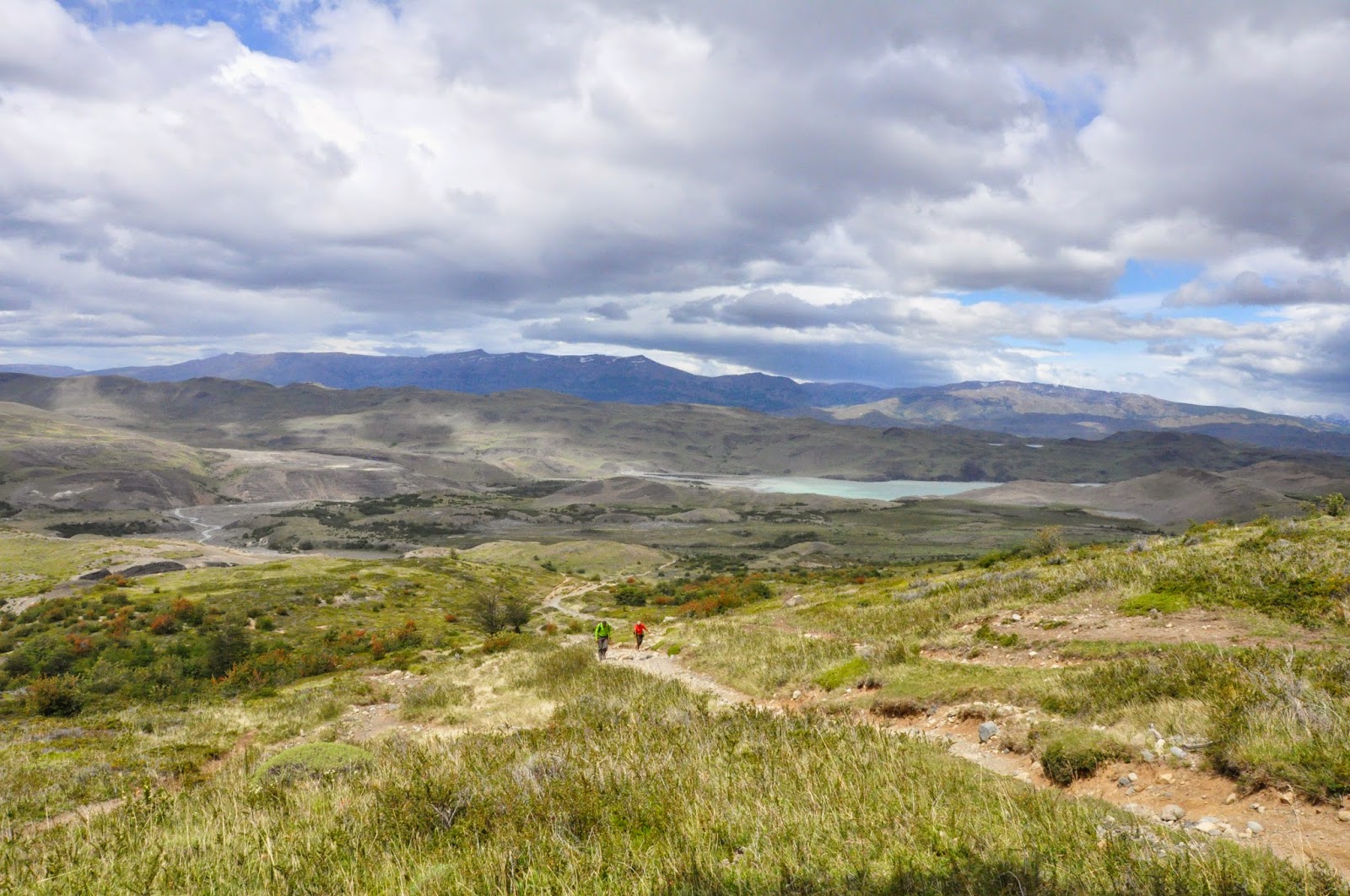 I went straight up the mountain for about half an hour until the trail leveled out a bit as it entered the Ascencio Valley, a hundred feet or so above the Ascencio River.  On my way up the mountain, I was carefully watching my footing so I didn't sprain an ankle on the rocks.  Soon as I entered the valley, I was carefully watching my footing to make sure the wind didn't assist me in somersaulting down into the river!  Rounding the bend where the trail leveled out and truly entered the valley was like walking into a wind tunnel.  It also became much narrower and some sections which were about a foot wide traversed rock slide areas that were basically loose gravel. 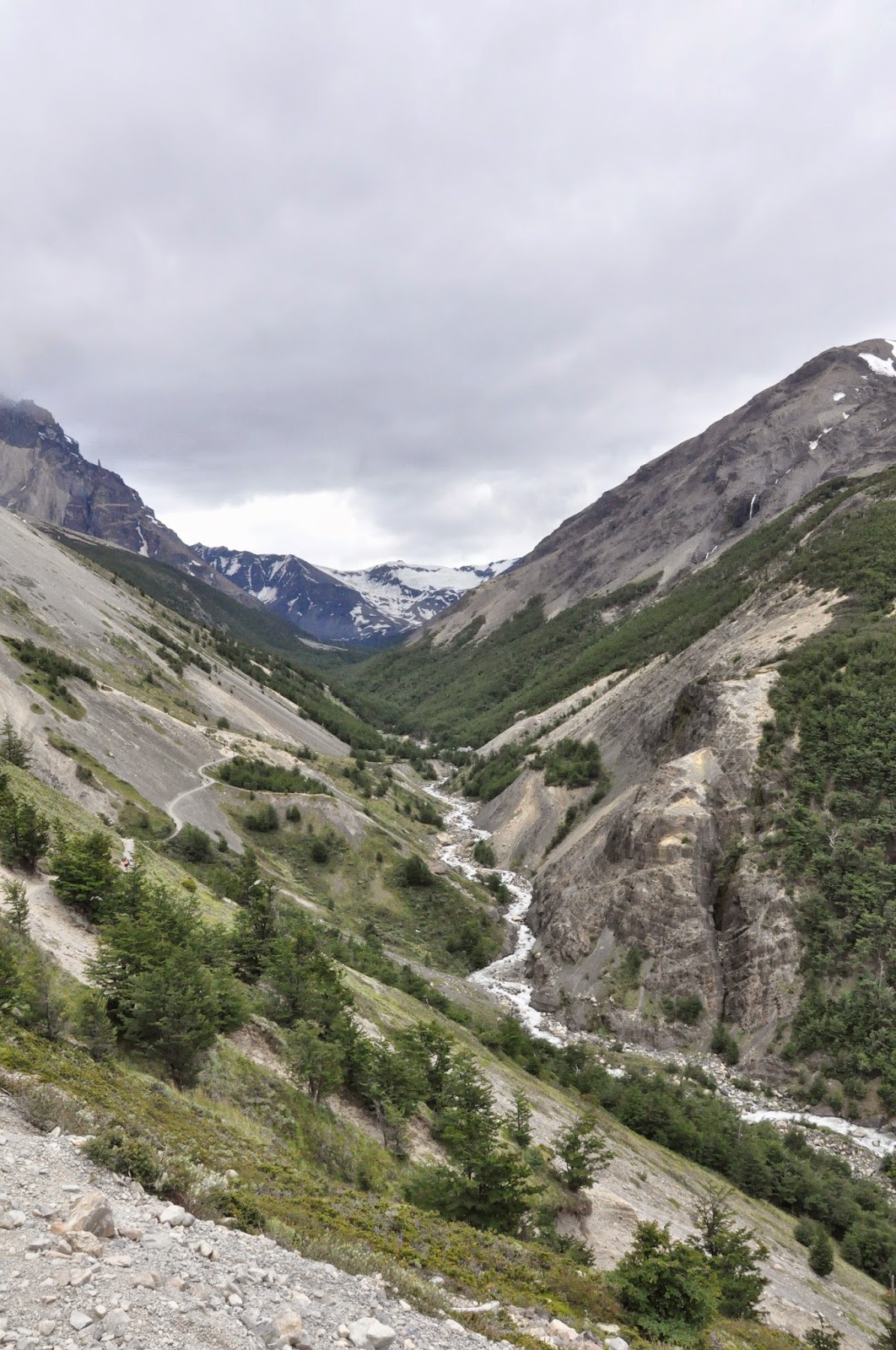 Despite the terrifying steepness and loose footing, it was nice to give my legs a break for a bit, until I encountered a sort of switchback in the trail.  It was the exact opposite of a normal switchback: I had to zig zag across the mountainside instead of zig zagging up/down the mountainside.  And there was a horse in the way.

So, surprise!  You can ride part of the way to the lookout of Las Torres!  The poor horse was trying to navigate its way down and out of the awkward switchback, and the not-so-experienced rider was terrified since it probably looked to her like the horse was about to nose-dive straight into the river.  There was a second horse and rider patiently waiting, facing uphill, as the two baqueanos tried to calm the lady and get her horse back to level ground.  They paused and let me scramble around them so I could get out of their way.

Not long after that, the trail dipped closer to the river and then crossed over into Campamento Chileno.  I wish I had stayed there, although hauling my backpack in would have been miserable.  You could bring your own tent, OR you could just rent one of theirs!  On a platform!  In the middle of the forest! Campamento Chileno was the end of the line for the horses, and I passed a few more tethered near the river as I left camp.  I paused while hopping rocks past a waterfall to refill my water bottle since I wasn't sure if the trail would be close enough to water again during the hike.  I love love love that the water in Torres del Paine is clean enough to drink without purifying and filtering.  Straight out of the creek.  As it should be. 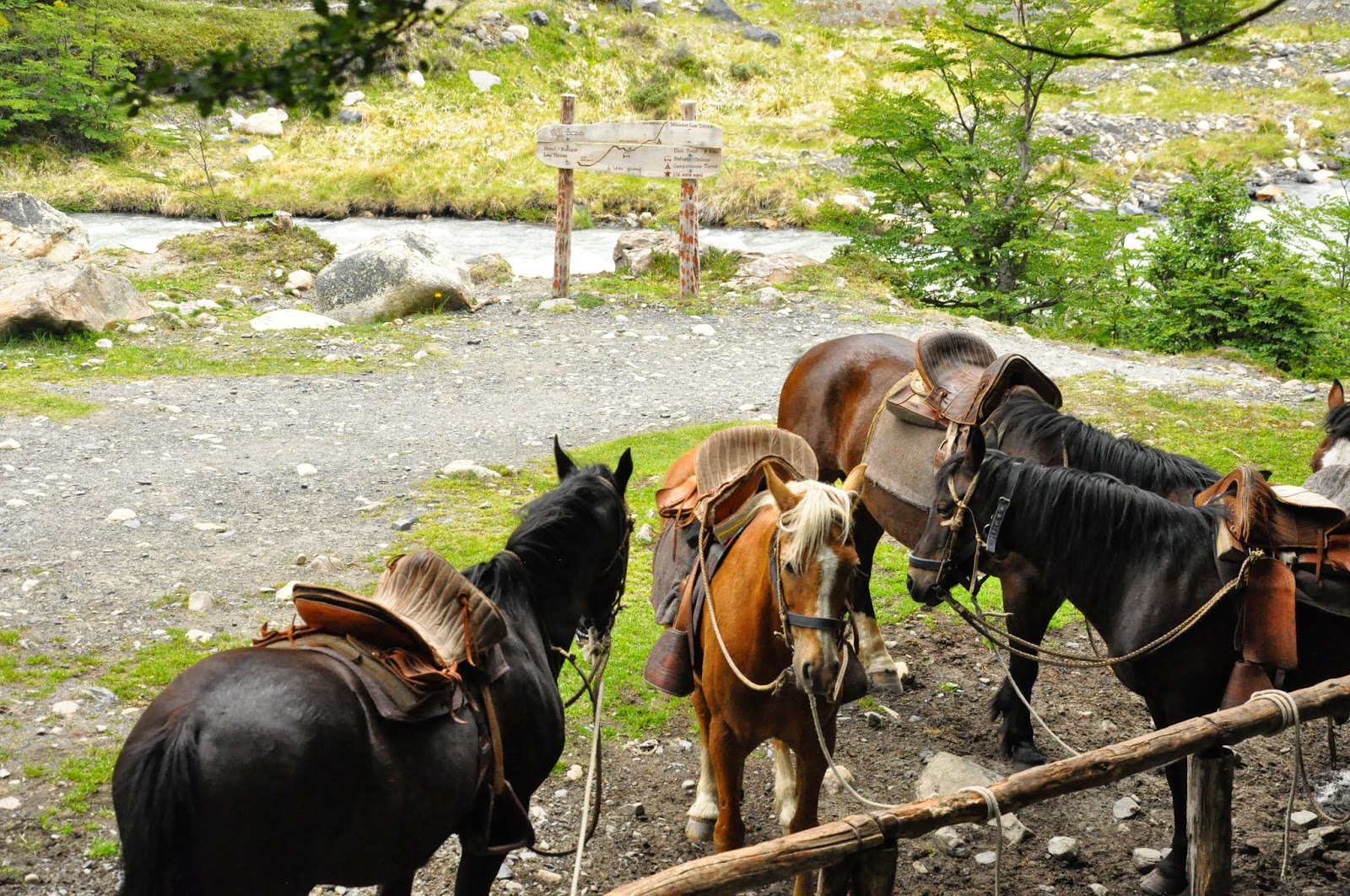 For the next hour or so, the trail wound up and down the valley and crossed the river again, and the terrain the whole time was gorgeous forests.  Sometimes thicker and mossier and eerier, sometimes more open and light.  All of it was remarkably quiet though, which made the journey a bit spooky at times.  Are there no birds in the Ascencio Valley?  I did pass other groups of people a few times, so that made me feel better. 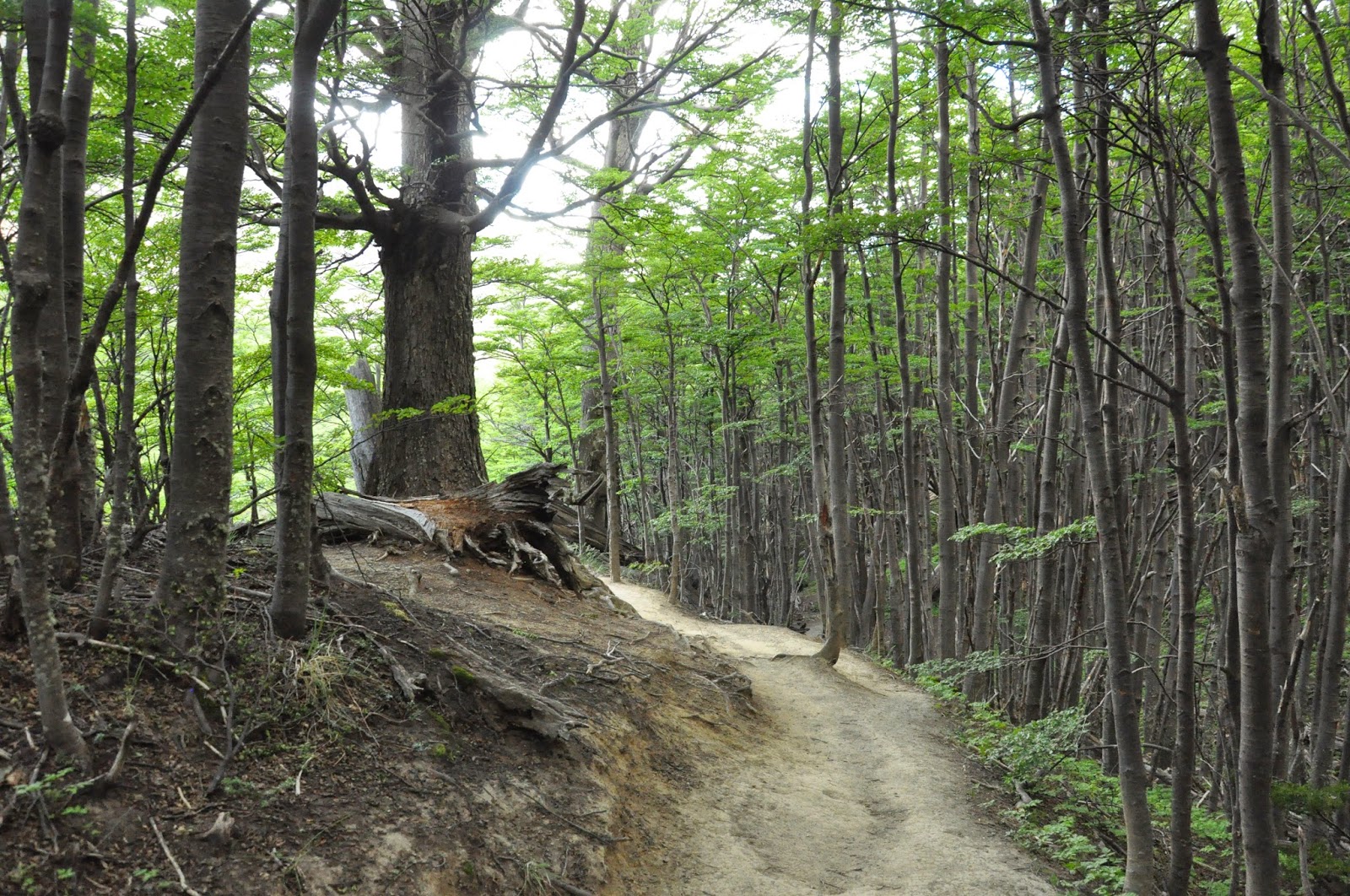 At long last, I popped out of the woods and it was time to tackle my second-least-favorite part of the hike: boulder hopping.  I just love boulder hopping.  But it was the only way to go straight up the side of the mountain to the lookout area (el mirador).  The wind, which returned with a vengeance without the tree cover, did not help.  Towards the top, the trail had been rerouted a few times due to instability or slides or some such, but of course its hard to tell where you're supposed to go when there's not really a path--just giant rocks.  And no way could each rock have its own sign saying whether or not it was part of the trail.

It hurt.  My knee wasn't happy.  I was even less keen to blow down this mountainside than the gravel one at the beginning of the valley.  But the clouds were moving through quickly over my head, and I was hopeful that I might actually get at least a momentary clear glimpse of the three stone spires if I ever made it.  Finally I popped over the edge of the mountainside.  AND THERE WAS A LAKE.

Spread before me was a huge ice-green beautiful glacier lake set like a bowl into the mountainside, with sheer crumbling stone rising on all sides except the edge I'd just conquered.  And on the far side, the stone rose even higher into the three distinctive spires, Las Torres.  But it took me a few minutes to wrap my head around the lake!  How on earth, in all my research on the W and Torres del Paine, had I missed the memo that this would also be waiting for me at el mirador?!? 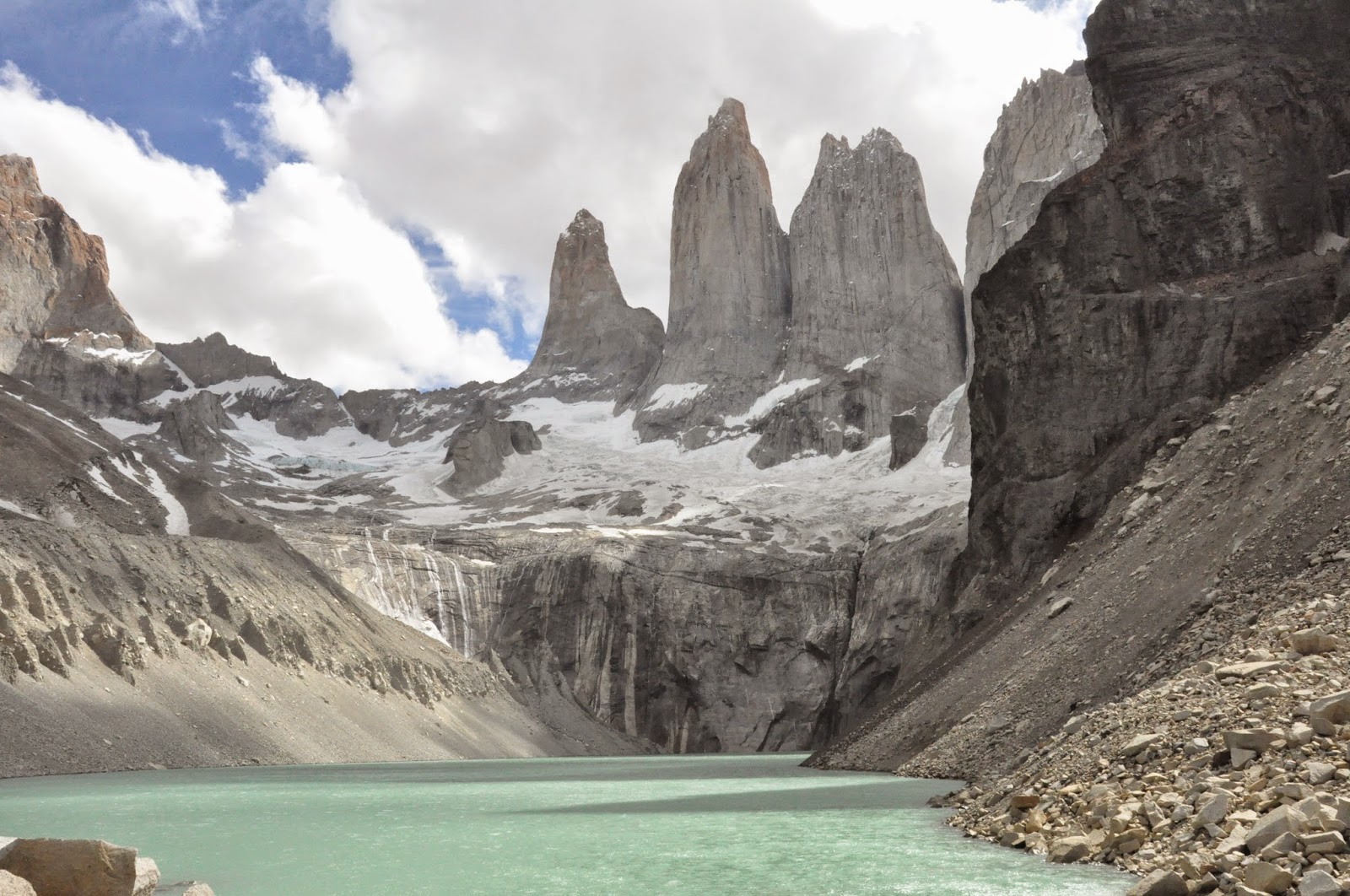 I was even happier that I had decided to 'be damn' all the potential obstacles and go the distance!  And the clouds continued to blow through, so I was able to snap a few unobstructed photos of Las Torres and witness the sunlight ignite the green of the lake.  Perfection. 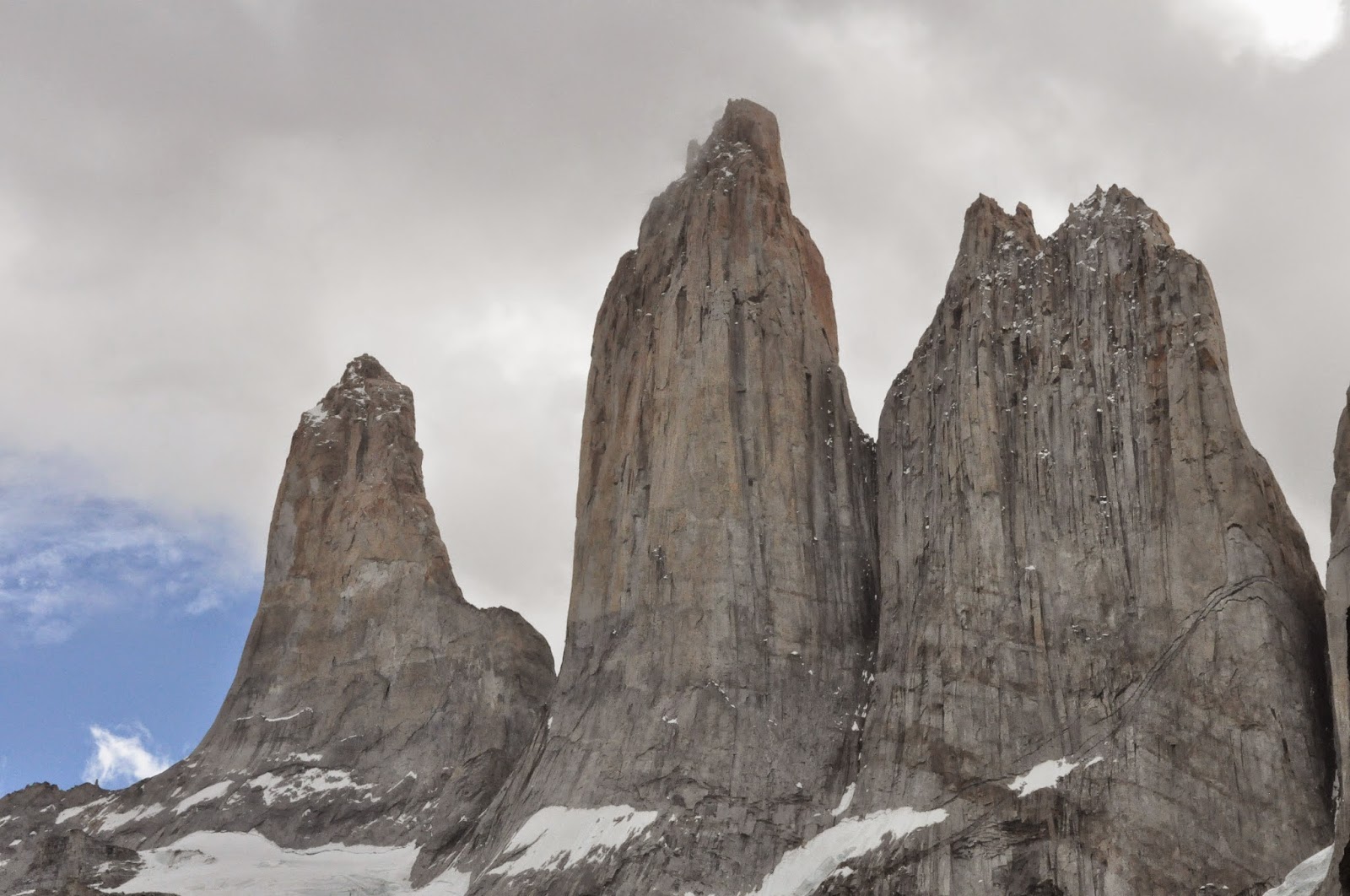 It was very windy and chilly at el mirador, and I knew I still had to beat the sun back to the hostel, so too soon, I turned my face back to the bouldery mountainside and commenced my least favorite part of the hike: boulder hopping downhill.  I already have zero confidence in my balance, and the gusty windy was not my friend.  Neither was my angry knee.  And my feet were starting to hurt.  I didn't have other socks or bandaids or anything, so I didn't even bother to stop and see what was up with that. 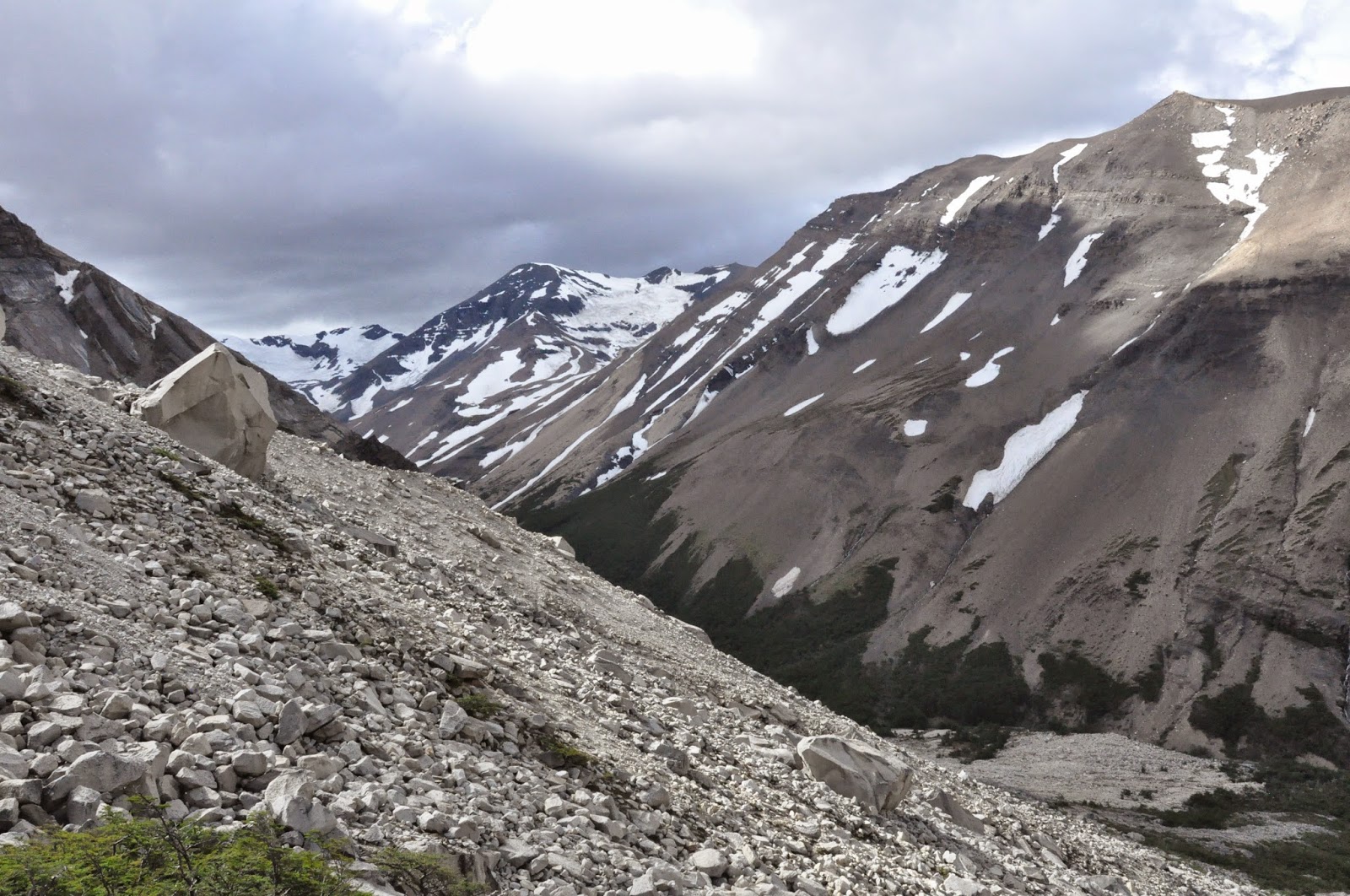 I was a very happy camper when I finally escaped the rock face and made it back into the beautiful beautiful not-windy forest.  I ran into a few people heading up to el mirador, and that was it for the next hour and a half.  I had those Middle Earth trees all to myself the whole time, and I kept freaking myself out wondering when was the last time anyone encountered a puma on the trail.  I actually tried to jog a couple times to soothe my nerves, but it had a decidedly un-soothing effect on my legs, so I gave up and just walked quickly, occasionally talking to myself.  But still making sure to stop for photos whenever something struck my fancy. 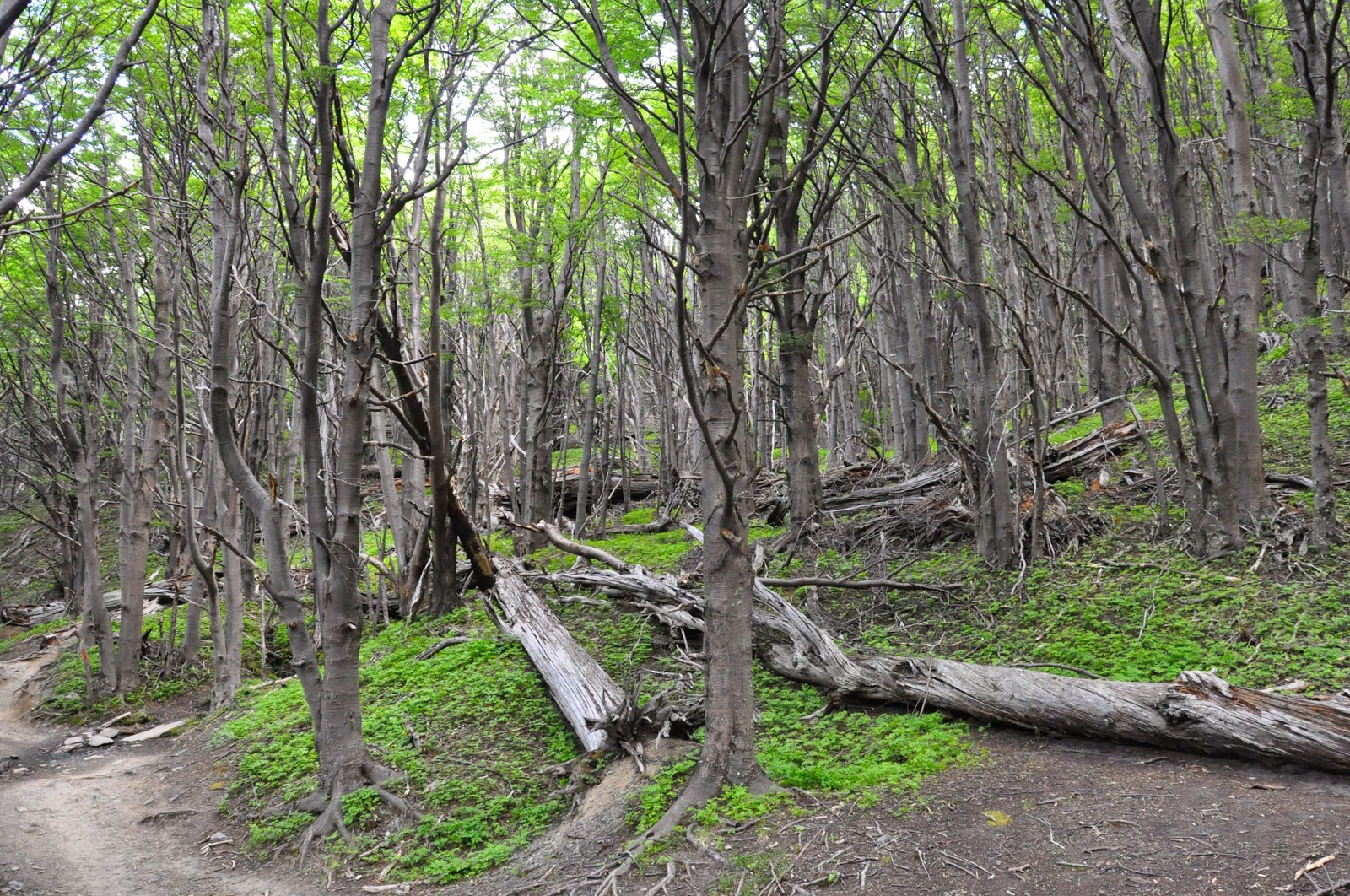 When the noise of the Ascencio River increased, I knew I was getting close to the bridges and the pseudo-civilization of the campamento.  I also stopped worrying at that point, because I knew I would make it back before dark.  And if something bad happened, someone could call the horses to save me! 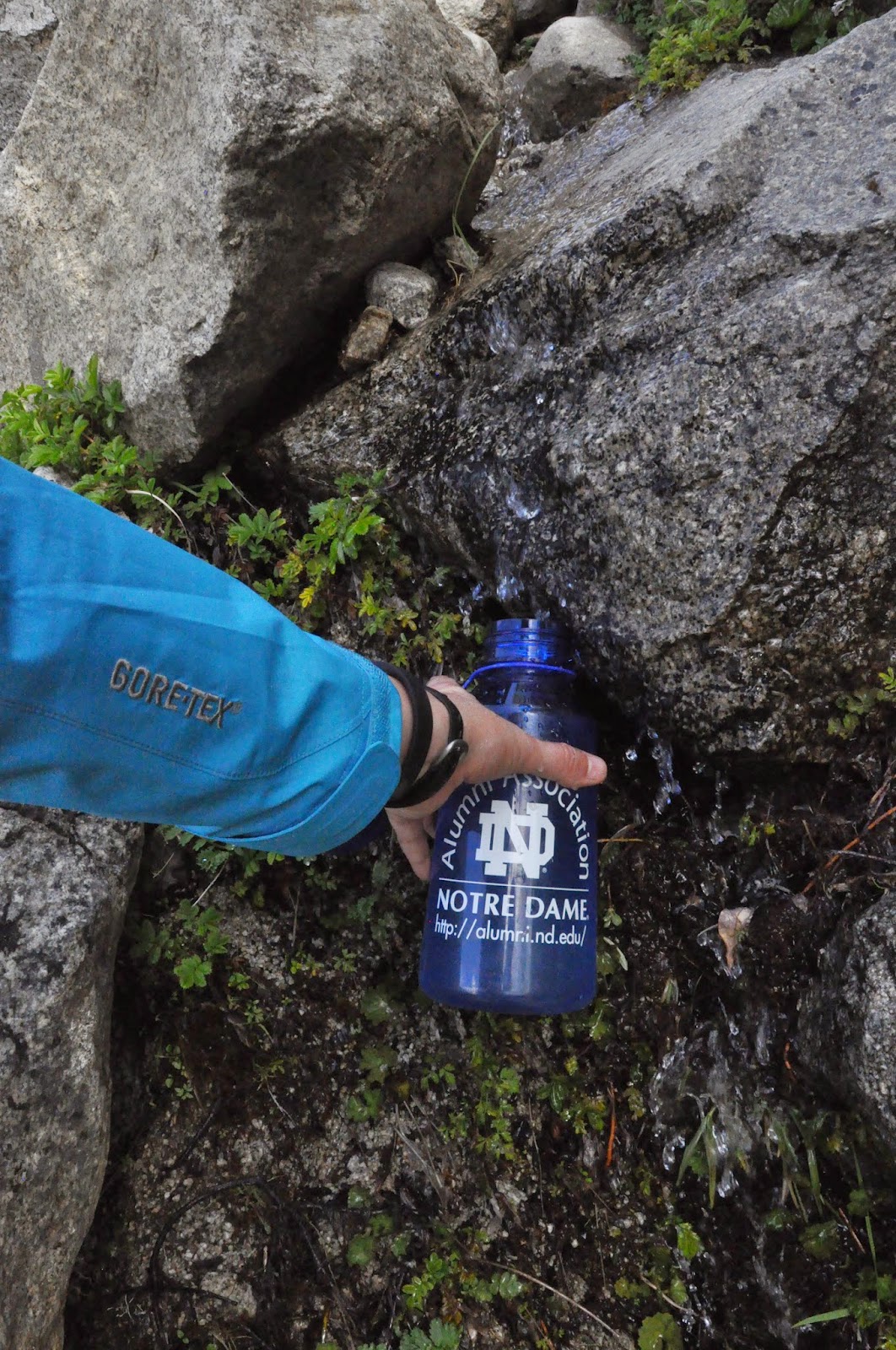 One (the only?) great thing about doing an out-and-back hike is that you'll see things you either didn't notice the first time, or flat out didn't see because you were headed in the other direction.  And the view when I popped out of the valley and faced the last long downhill was mind-blowing.  I mean, it could have been happiness that the end was in sight, but I don't think so.  The photographs speak for themselves. 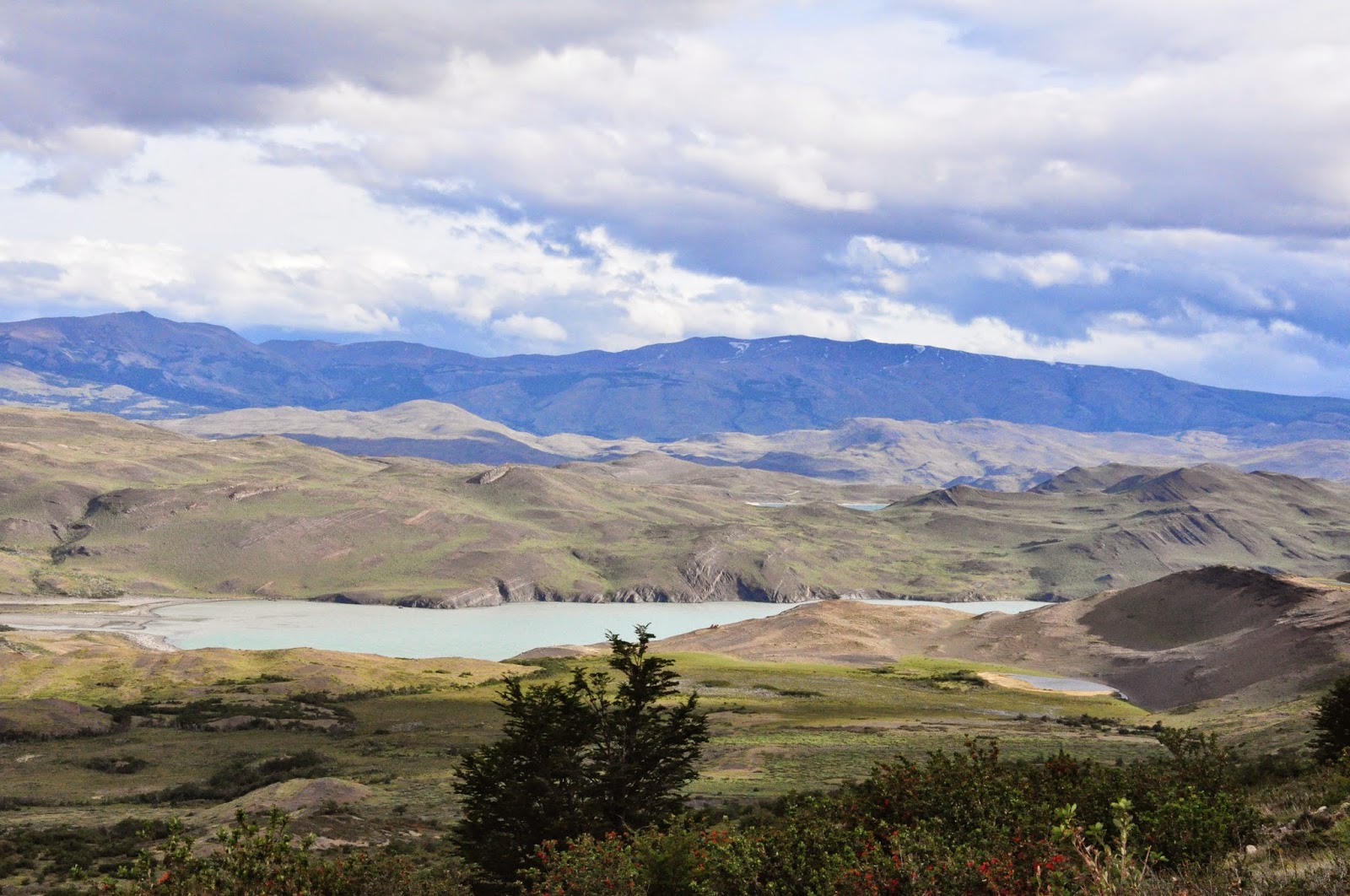 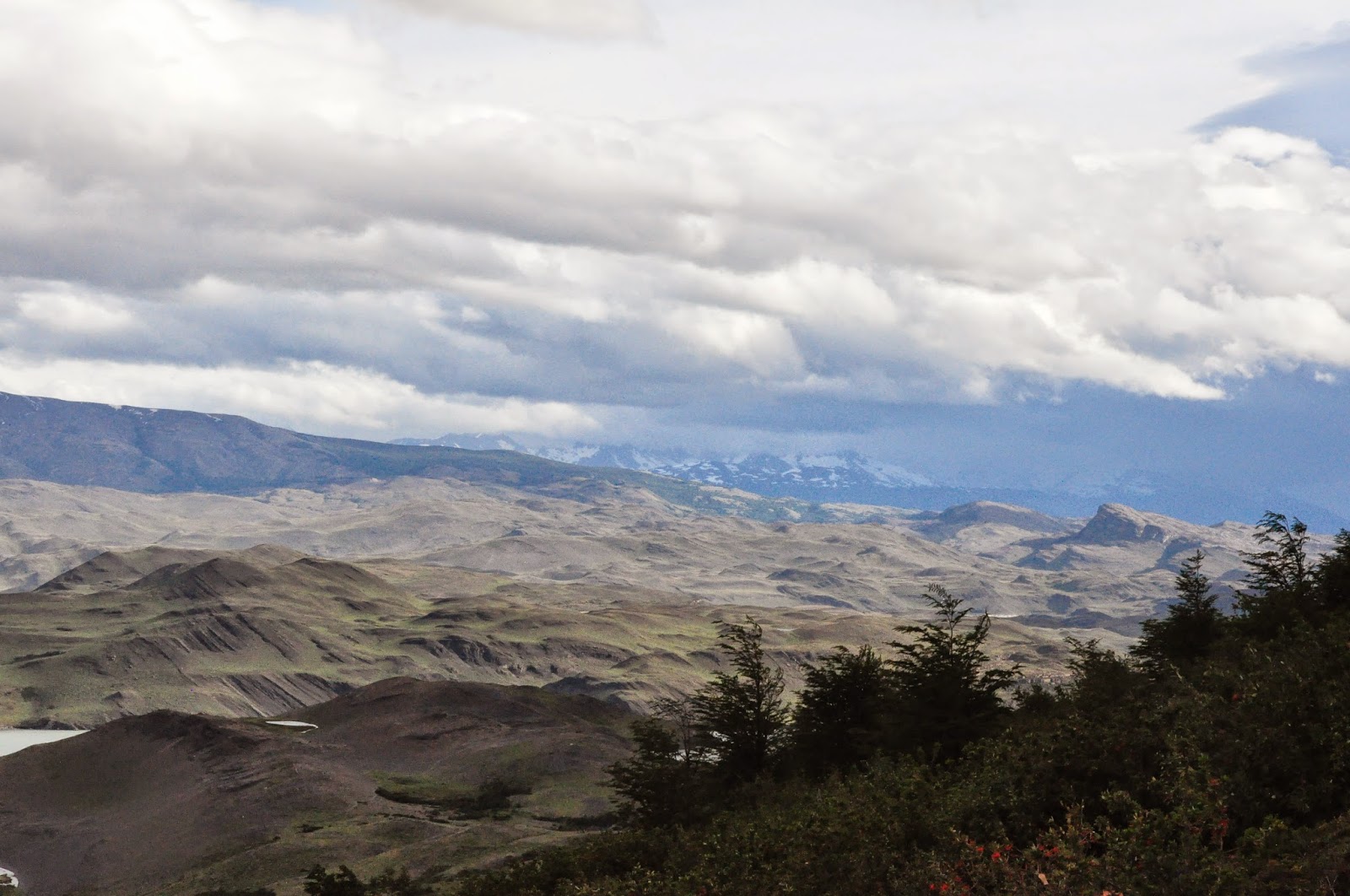 The last stretch downhill out of the Ascencio Valley back towards Hosteria Las Torres was miserable, but only because my knees were shot and my feet hurt so badly they were numb.  Turns out they were an absolute mass of blisters because I'd only worn one pair of socks.  That's me, always learning things the hard way!  I was totally exhausted and sore, but also pretty pumped because hiking to El Mirador de las Torres was another step up in my hiking experience: first major solo hike!  (Mount Mansfield was peanuts in comparison, and I had company for everything else.) 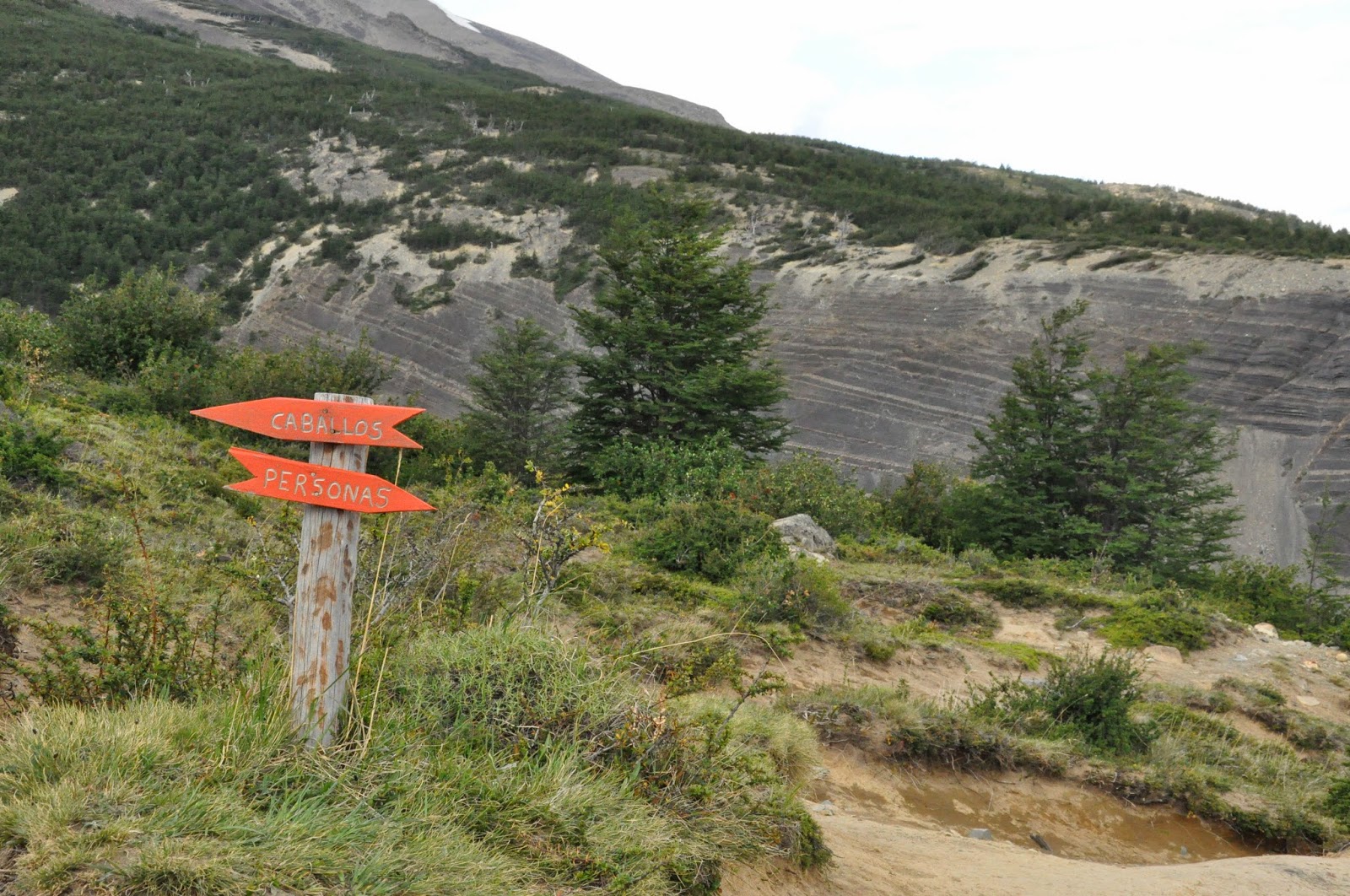 Nature even celebrated for me when my tired legs and aching feet crossed that last bridge and stepped onto the soft grass of the field outside the main hotel.  My pot of gold: hot dinner, a comfy bed, and sweet dreams of the mountains! 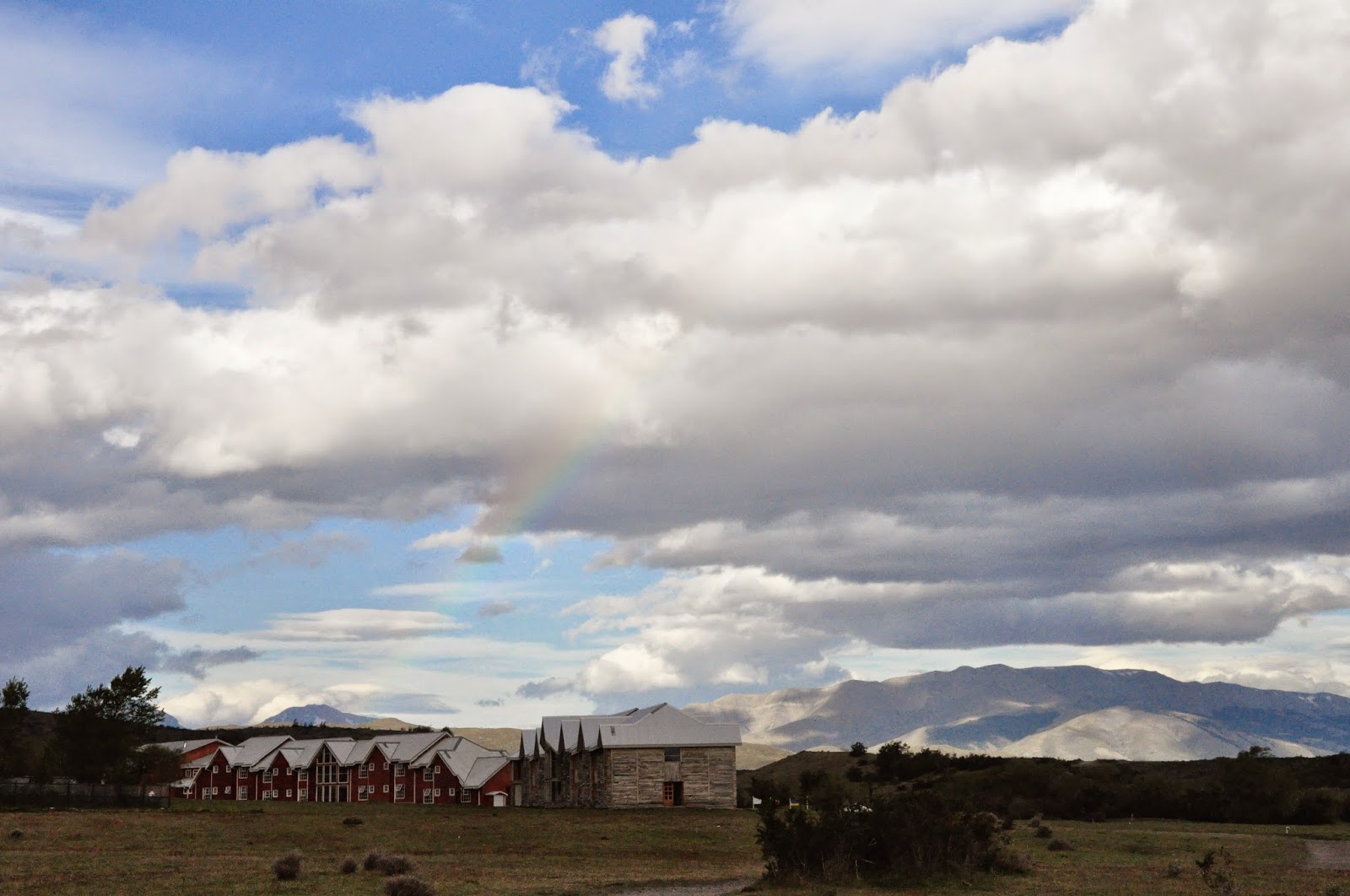 P.S. Here's a really nice map from www.torresdelpaine.com that shows the trails, hosterias, campamentos, and other important info for hiking the W in the park. 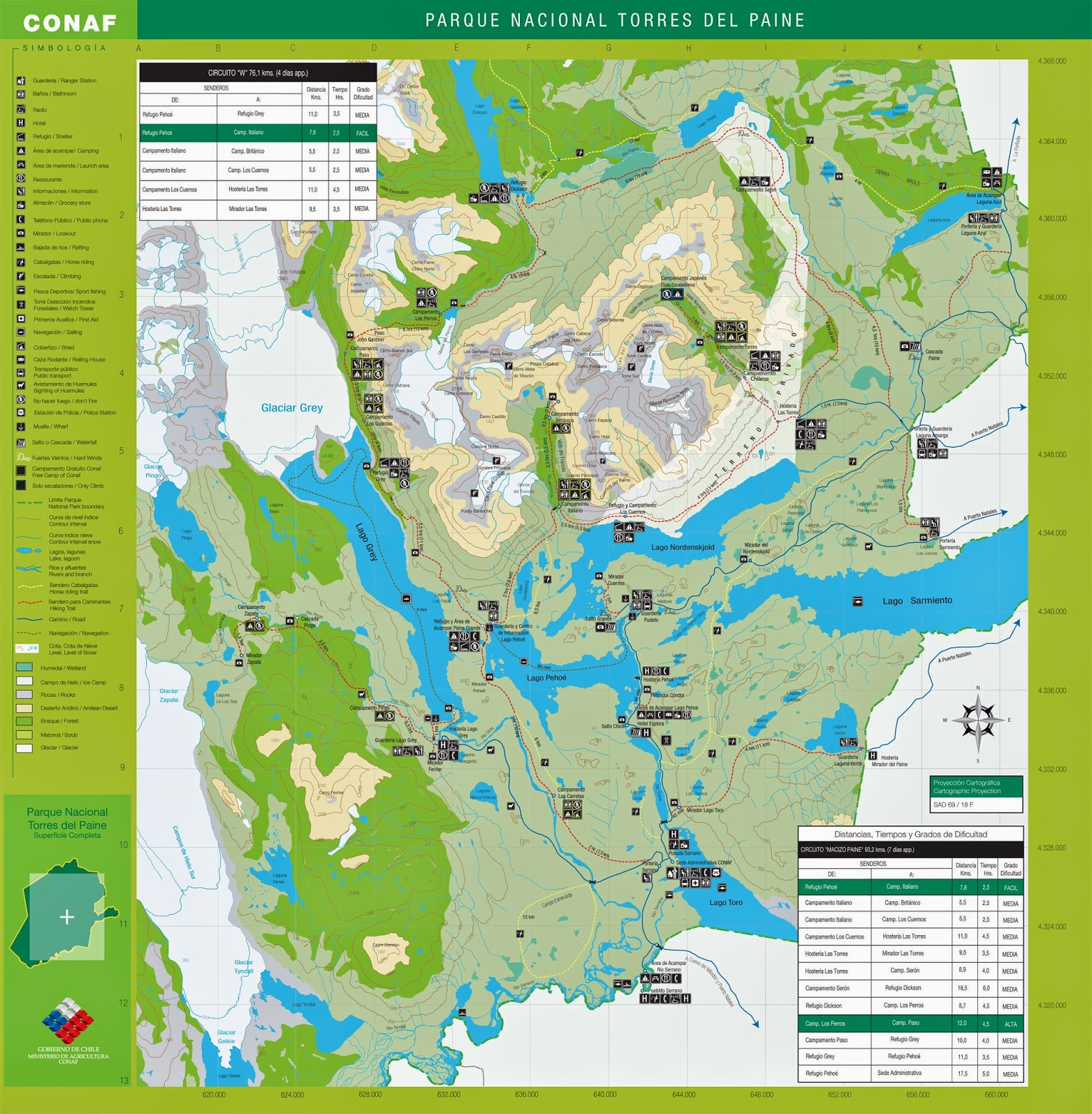