When I Needed a Hug, Antarctica Was There

It's been a rather rough few weeks.  Restless thrashing nights plagued by strange dreams that dissipate upon waking, but leave sticky cobwebs on my consciousness.  Unfulfilling days plagued by a persistent sense of absence so vague that it can't be captured and therefore addressed.

For one thing, I'm in the middle of moving from a place that I really love to a place that I'm really not excited about.  Everything I do is shadowed by the knowledge that it might be the last time.  I'm leaving behind my favorite running trails right when I need them in the middle of marathon training.  I've found the good hangouts and fun bars and secret beaches.  I could lead a wicked foodie tour through the best bakeries judged by cupcake or cannoli.  I have absolutely maximized by time here, and I have zero regrets or nagging feelings that I missed out on things.  I'd be okay with leaving, but I don't want to go where I'm headed.

For another, regardless of years in a city surrounded by an endless array of people, I am still remarkably alone.  I refuse to believe that they are not out there, but despite my best efforts, I never found similar souls here.  Instead, there are good people who occasionally accept an invitation, but rarely extend them.  Good people who are occasionally game for an excursion, but only if it's in the vicinity of their neighborhood.  Good people who grasped my extended hand, but never pulled me in for a hug.

And everyone else disappears.  Former friends march on with their lives, getting married, having children, and the minimal effort of picking up a phone and pressing 'dial' suddenly requires too much time and energy and planning.  Friends who mere months ago were brimming with enthusiasm at the mention of a potential visit suddenly turn their backs and coldly converse in monosyllables.

So despite the fact that it's finally summer and it's beautiful outside and bright happy weather is an instant mood-lifter, I have been struggling with the blues.  No matter how hard I run, no matter what trips I contemplate for the coming months, no matter how many silver linings and bright sides I try to focus on, they keep catching up, stiflingly wrapping around my shoulders and persistently hollowing out my insides.

I was recently emptying out my backpack to prepare for another trip (PACKING FOR A TRIP AND THE DAMN BLUES WERE STILL THERE!!) when my fingers grazed a thin piece of wire wedged behind the back panel.  I thought, A coat hanger?  Why on earth is there a coat hanger in my backpack?

And I pulled it out.

It was not a coat hanger.

Attached to one end of the bent wire was a battered blue flag that looked like it had had a few bites taken out of it.  Some of the lettering was missing.

I stood there for a moment, holding that scrap of plastic, and I felt my heart lighten.

The tattered scrap in my hand was a course marker from the Ice Marathon.  Immediately, my mind flew back to a few days after the race when we were hanging out waiting for the storm to pass.  A friend and I had walked part of the course to stretch our legs and escape from the tents for a bit.  We paused to sprawl on our backs in the snow and let the vastness of the ice and emptiness encase us.  The only color to be seen in the swirling monotony of greyish white was the brave blue of the flapping little flags, which hadn't yet been retrieved even though the running was finished.  Some of them were a little worse for the wear, and we decided Richard wouldn't be upset if one or two of the broken ones became mementos.

That was November 2013.  Since then, my backpack has embarked on multiple trips and gone through multiple airport scans and been emptied and refilled multiple times.  The course marker remained tucked away against the spine, waiting.

Waiting for that time when I needed a reminder and a hug and moment of happy memory and a smile.  Trust Antarctica to bring back the wind when my wings are mired in gloom.

That night, I slept in peace and stillness. 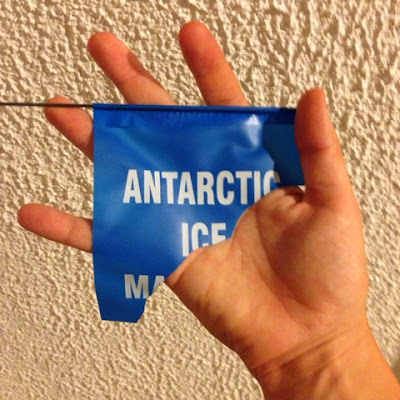